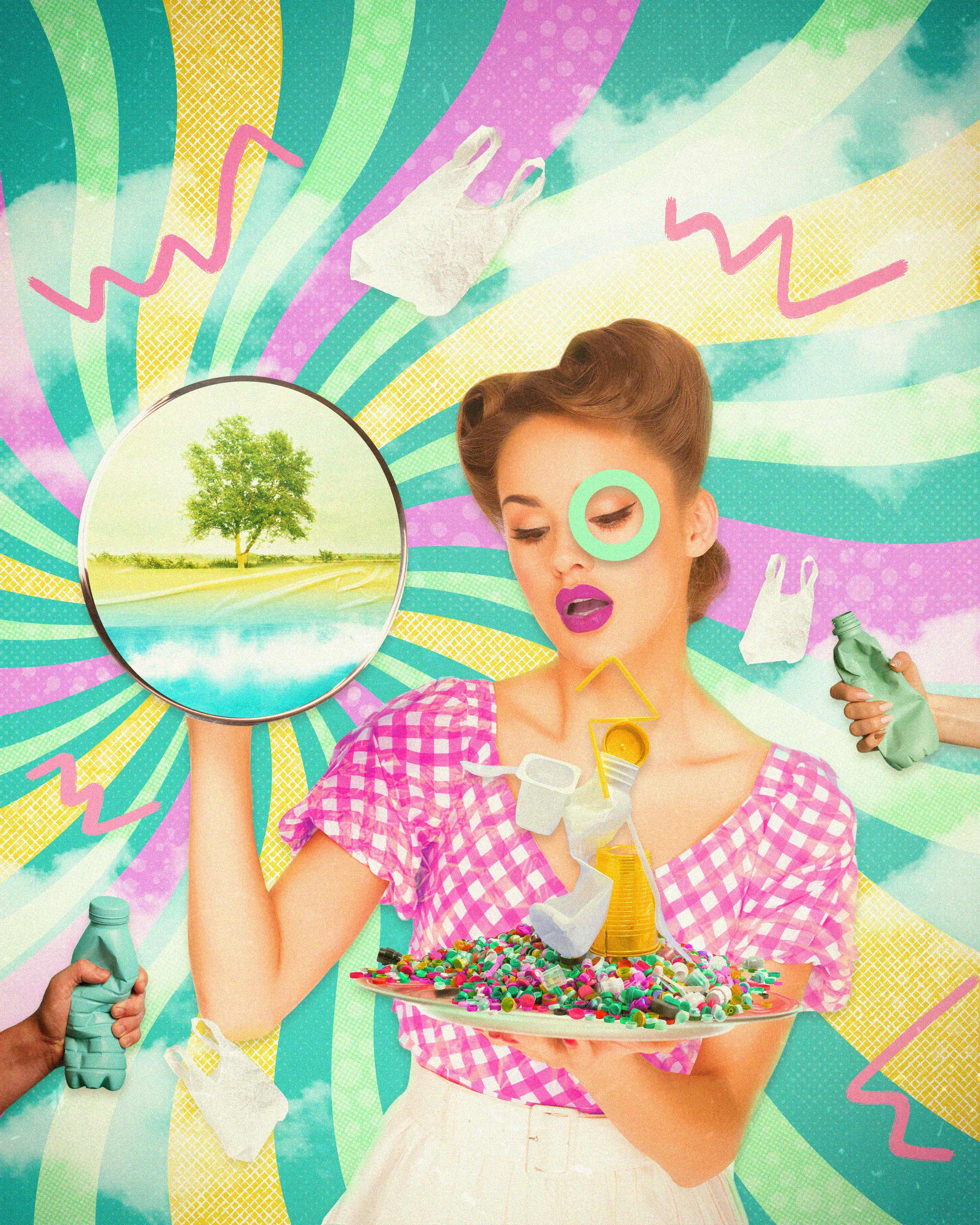 In the city of Bekasi on the southeast fringes of Jakarta, Indonesia, there is a stretch of trash and debris larger than a football field that forms the Bantar Gebang trash dump. This illegal riverside trash dump supports a microeconomy of trash collectors, pickers, and vendors. Over the decades, it has grown like an oil spill, slowly branching out to take over the land and homes of people nearby, until residents can’t leave their homes without stepping on mounds of trash.

It was long assumed that these unregulated trash dumps resulted from poor domestic waste management systems and negligence. And while it's true that Indonesia suffers from questionable waste management policies, and is the 11th largest plastic producer in the world, in recent years, the majority of the waste in Bantar Gebang has come from shipments from the US, Australia, Canada, and Europe.

For many Western countries, shipping trash to globally poor regions has been a convenient — if unethical — way to get rid of rubbish and plastic. Out of sight out of mind, after all. China used to be the biggest trash importer and global recycler until it banned most plastic imports in 2019. Since then, most Western states have turned to poorer, poorly resourced regions to handle their waste management woes, including countries such as Indonesia, Vietnam, Thailand, Malaysia, and Cambodia. It is not going well.

While there are some import regulations around trash in Indonesia, they are notoriously lax and often ignored.

Major plastic companies claim these cargo ships of plastic are being exported in order to be recycled, however, a 2019 Guardian investigation found that this is largely not the case, with more than 90% of the waste ending up in landfills which later wash into nearby rivers, until they are carried to the ocean. As of 2016, the US ships nearly 3.9 million tonnes of “recyclables” abroad each year, according to National Geographic. And this number has only increased as the global pandemic generated unprecedented amounts of single-use waste.

Bantar Gebang is one of hundreds of illegal dumps in Indonesia. Those who live in the area surrounding the slum face a constant foul odor, ever-encroaching tides of trash, and a glut of diseases, injuries, and health issues because of the unsanitary living conditions. Although the government has attempted to crack down on illegal waste dumping in recent years, the dump has persisted and continued to torment local residents.

But even outside of the Bekasi community, these dumps are a major threat to Indonesia’s food industry and represent a weak link in the global food supply system. That is because the same plastics that end up in the Bekasi dump, may eventually end up in food products all over the world.

There are two seasons in Indonesia — rainy and dry. During the rainy season, monsoon rains beat down endlessly from October to March, causing widespread flooding. Amid the floods, the downpour washes waste and plastic from illegal dumps into Indonesia’s vast network of rivers and waterways. From there, the trash and plastic are either broken down into smaller microplastics, or left to wash into the sea until the tide pushes it back onto the archipelago’s beaches. Heartbreaking images of trash-laden beaches and waterways have gone viral in the past, drawing criticism and deterring much-needed tourism to the island. However, the more insidious part of this cycle isn’t in the spoiled pristine beaches of the coast, but in the invisible pollution occurring in Indonesia’s rural agricultural spaces.

Indonesia’s primary agricultural staple is rice. A vast majority of households rely on it for every single meal, and there is even a saying in the archipelago “if there is no rice, it isn’t a real meal”. In order to meet this demand, much of Indonesia relies on a network of rice paddies and terraces.

For those who visit tourist hotspots such as Bali, these emerald fields, dotted with colourful lanterns and farmers in conical hats, offer a majestic and peaceful look into life on the archipelago. Indonesian farmers rely on complex, traditional irrigation systems to maintain their fields. Rice paddies are a notoriously wet business, as the crops have to grow in about six inches of muddy water for months until they sprout.

To irrigate the fields, farmers divert water from local rivers and waterways — water that is often filled with microplastics and bits of trash. For years, scientists weren’t aware of microplastics in our waterways, and then they believed that they posed no threat to humans. But it is now clear that is simply not the case.

As these plants grow, they absorb microplastics and contaminate the food we eat. This is particularly true when fields are watered with sewage, untreated water, or compost.

A 2021 report indicated that microplastics can cause severe harm in humans, including cell death and allergic reactions. Even more concerning, toxic microplastics can be carcinogenic and can have other dangerous effects.

Researcher Evangelos Danopoulos, who conducted the study out of Hull York Medical School, and published the study in the Journal of Hazardous Materials told the Guardian, “Harmful effects on cells are in many cases the initiating event for health effects. We should be concerned. Right now, there isn’t really a way to protect ourselves.”

But the scariest part of microplastics is that we still aren’t sure what impact they have on human health and wellbeing. (For a deeper look, check out Sliced’s recent article about how microplastics are entering our bodies.)

These dumps are not unique to Indonesia. Developing countries all over the world struggle with waste management. This is particularly true of countries in the Global South that receive trash exports from Western countries.

The Climate Policy Watcher says that while wealthier states tend to produce more processed food and packaging, they also tend to have more disposable income to put towards waste management systems, adding: “Unlike developed nations, poorer countries in the developing world often have not developed adequate waste management policies or systems, trash collection services, or government institutions to properly manage their wastes.”

And this isn’t simply an issue for poor countries.

Our global food cycle is cyclical, meaning that as Americans consume processed food and plastic, that trash often ends up in poor or developing countries without the infrastructure to properly dispose of it. From there, it may end up in rivers or fields and can contaminate agricultural fields and farms. And in the context of a global trade system, the US imports a significant amount of food from Asia — including rice.

What this means is that for every piece of trash an American throws away, there is a chance it may eventually end up back on your plate in the form of microplastics.

So what can be done?

On an international scale, some countries are pushing back against this unsustainable system. In 2020, the Malaysian government sent 267 shipping containers filled with waste back to their countries of origin.

“Malaysia will not be a dumping ground to the world … we will fight back. Even though we are a small country, we cannot be bullied by developed countries,” said Malaysian Environment Minister Yeo Bee Yin in response to the decision..

In Indonesia, some organizations like Sungai Watch are putting pressure on the government to clean up illegal trash dumps and create more regulated disposal systems that won’t leak waste into the country’s waterways. They have set up blockages in barriers in some major waterways to try to quell the flow of trash into the ocean, and also organized hundreds of clean up campaigns with volunteers from the community. In a social media post Sungai Watch organizers said that “Cleanups have been a huge part of our work in activating communities and in addressing the plastic emergency on Bali.”

“A lot of river banks in Indonesia are covered in plastics and our barriers are not enough to fully clean a river. We organize emergency cleanups at illegal dumps and along riverbanks every week to prevent plastic from entering rivers in the first place. A lot of this trash accumulation is due to the lack of waste management and recycling infrastructure.

“Although Indonesia has pledged to reduce 70 percent of plastic pollution it emits into the ocean by 2025, we are continuing to see an increase in illegal landfills that are piling up along rivers. To address this issue, we are organizing more cleanups and working on a strategy to improve Bali’s waste management system.”

Another answer is for Western states to take more accountability for their trash and waste disposal systems. On the national level, that might mean ending trash exports to poor countries without proper waste management systems. Countries in the global north could also bolster domestic recycling capabilities and pressure plastic companies to find less harmful production methods.

But on the individual level, that will mean being more intentional and considerate about how and where you source your food. Consumers should avoid food in single-use plastic and seek out brands that demonstrate a commitment to sustainability.