ISSUE
8
-
Plastic
Plastic is in our blood, stool and lungs. What does it mean for our health? 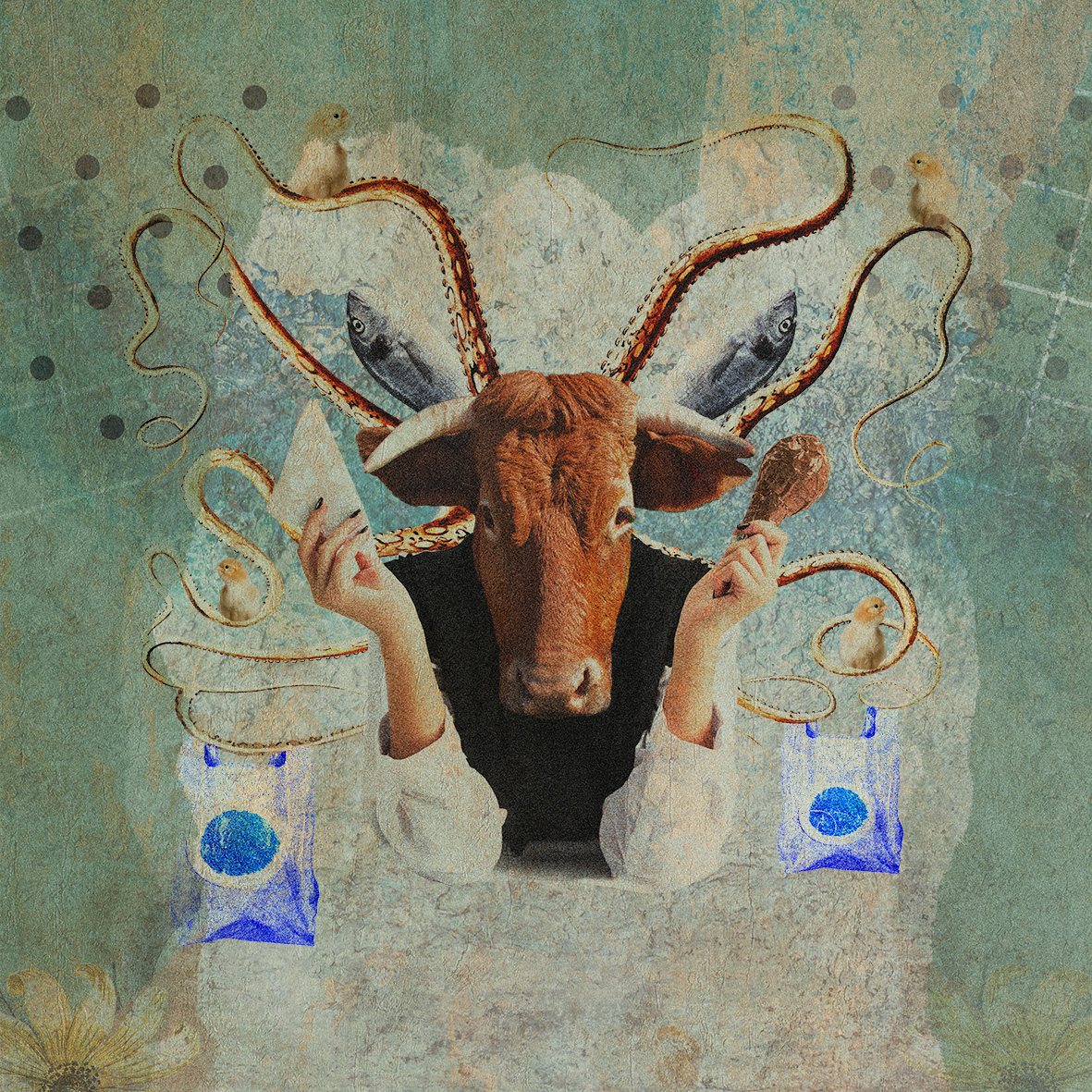 Digital Collage Artist:
Taha Sherif
More and more evidence shows the polluting material is in our bodies, but no one knows exactly what the effects will be
by
Emily Monaco
4/28/2022

It’s no secret that plastic is suffocating the planet. National Geographic reported back in 2019 that every year, 8 million tonnes of plastic waste is dispersed into the world’s oceans. Plastic takes hundreds of years to decompose, harming animal habitats and polluting our waterways in the meantime. And it might also be harming your family.

This is no exaggeration. While larger plastic trash is certainly an eyesore, microplastics have infiltrated our food system.

Microplastics are plastic particles so small you can’t even see them. The U.S. National Oceanic and Atmospheric Administration and the European Chemicals Agency officially define them as measuring less than 5mm long. And they enter our lives in a wide variety of ways.

One way in which microplastics enter our bodies is via plastic water bottles. Studies show that plastic bottles can release particles into the liquids they contain, with one recent study in particular showing that the levels of certain microplastics in infants can be ten times higher than those in adults, as microplastics leach out of baby bottles. Plastic containers can also transfer microplastic particles to food, particularly when heated. Particles can enter the air when we burn plastics, too, according to Dr. Daniel Cane, who notes that “our homes … harbour microplastics that we breathe in day to day without our knowledge.”

But for Dr. Dana Ellis Hunnes — a dietitian who has studied microplastics in fish and authored the recently published Recipe For Survival — these are far from the most detrimental ways in which microplastics can enter our food system.

“Of course, if left out in the sun long enough [water bottles] will photo-degrade and leach chemicals into their water, and tin cans with BPA lining will leach some into their foods (especially for acidic foods),” she says. “But, by and large, it's a function of how we treat our waste.”

Dr. Britta Baechler, senior manager of ocean plastics research at Ocean Conservancy, notes that this is true of waste both on land and in water.

“Agriculture is a major source,” she says, “especially when plastic film is incorporated into the soil via mulching, or when sewage sludge is applied to fields as fertilizer, since sewage sludge can contain high levels of microplastics from grey water.”

But microplastics are far more pervasive in our waterways than on land, due to actions like disposing of toothpaste and face wash (even post microbeads!) or laundering clothes with vinyl, elastic, and polyester. These microplastics, Baechler explains “enter our waste water and are too small to be filtered out, ending up in rivers or the open ocean.”

Once there, these microplastics are eaten by sea organisms (though not, as we once thought, because they become addicted to them), and as these organisms are consumed by fish higher and higher up the food chain, they become an even more pervasive problem. A whopping 73% of fish covered in one study were found to contain microplastic particles in their guts, and the numbers are likely only higher with bottom feeders like mollusks, shrimp, crab, and lobster, contends Dr. Robert Brown.

“As with other ocean pollutants, predators that eat the contaminated fish bioaccumulate the microplastics,” he says. “Many humans are in the predator category.”

And even those who aren’t — aka vegetarians or vegans — might be consuming plastic, according to Dr. Elliana Rose, who notes that since plants use water to make their food, “these water-containing microplastics are taken up through the roots and you consume them.” One study found that carrots and apples were likely to contain the highest microplastic load.

The idea of consuming any plastic is worrisome — but consuming small bits of plastic should actually be even more alarming, according to Dr. Aaron Hartman, Functional and Integrative Medicine Doctor at Richmond Institute of Functional Medicine. Microplastics, he explains, “have the effect of amplifying exposure” due to our body’s tendency to interpret them as nanoparticles — like the ones in our over-the-counter supplements.

“You could consume a chunk of plastic and pass the majority of it through your stool,” he says. “The thing with the nanoparticles or the microparticles is that they increase absorbability. These harmful things can actually be absorbed through the GI tract into the system.”

According to experts, the effects are probably just as bad as you’d imagine them to be — probably being the operative word because, according to Dr. Carrie Lam, the small size of microplastics makes them tough to detect, and particles in the air can skew test results when evaluating their pervasiveness and impact. That said, she continues, new technologies are making it easier for medical researchers to measure the levels of these particles in the body, and the results aren’t promising. Researchers, she contends, have thus far been able to detect microplastics in people’s lungs, liver, kidneys, and spleens. Recently, scientists even detected microplastics in human blood for the first time, with almost 80% of people tested carrying the particles in their bodies. The research, the Guardian reports, shows that microplastics aren't just absorbed, but can actually travel around the body.

“The real danger of these findings,” she cautions, “is the fact that no one knows what effects these particles will have on the body.”

But we can guess.

Danielle Gaffen, who specializes in nutrition for people with Crohn’s disease and ulcerative colitis, notes that “most of the evidence we have right now is from test-tube and animal studies,” although we can extrapolate a bit from this research, which has notably linked plastic exposure to a range of health hazards including inflammation, infertility, cancer, aneurysms, endocrine disruption, and more.

And while Hunnes says that marine animals are ingesting far-higher doses of microplastics than humans, and Baechler cites one study that seems to show that humans are “probably able to clear the vast majority (more than 90%) of ingested microplastics from their systems […] there’s a big question mark on what that remaining plastic does to one’s system, especially over time.”

“It is uncertain how long microplastics remain in the body and if they become concentrated in specific cell lines or organ systems,” agrees Brown, who nevertheless notes that microplastics have been documented in newborns’ meconium and cites a study that showed microplastics on both the fetal and maternal sides of the placenta as well as within the amniotic membrane.

There is, therefore, reason to believe that microplastics are present in our bodies — and that they could have the same negative effects on our health as they do on that of animals.

“Scientists are still studying the effects of ingesting microplastics on humans, but what we know so far is troubling,” says Baechler.

One major concern, according to Hunnes, is the fact that plastics contain substances that mimic estrogen.

“When we consume too much of them, it can change our hormones,” she says. “It increases the risk for fetal abnormalities, birth defects, hormone-receptive cancers as a possible carcinogen.”

Hartman agrees, citing a “great body of literature” linking microplastics to increased risk of diabetes and premature menstruation in women, not to mention data that seem to show microplastics could increase the risk of epithelial-related cancers, such as colon, prostate, and breast cancer.

“Insulin resistance is frequent, and estrogen dominance is one of the most serious problems that women confront,” he says.

Microplastics are a slow, silent killer, and this may be what makes these tiny plastic bits such a huge problem.

“When we call something dangerous, most people think of an immediate response that could cause severe illness or death,” says Brown. “That is not the kind of danger we are talking about with microplastics. The negative health effects are insidious and chronic.”

He cites one recent meta-regression analysis of the health impacts of microplastic exposure on human cells that found that microplastics can lead to cell death and trigger immunoreactions that exacerbate the chronic inflammation many of us are already living with.

“The immunomodulating effect,” says Hartman, “is the single most harmful health effect microplastics have.”

New research is currently being carried out that seems to confirm what scientists had already extrapolated from these animal studies. One recent study showed troubling links between microplastics and male fertility, notably that exposure could contribute to reduced sperm quality. Gaffen cites a new small-scale research study published in the journal Environmental Science & Technology that found an association between inflammatory bowel disease (IBD), the severity of Crohn’s and ulcerative colitis, and greater amounts of microplastics in a person’s stool. While she says that more research is needed to determine whether this correlation implies causation or not, it is definitely troubling.

“To pin these diseases to microplastics is not possible, at least not at the present time,” says Brown. “However, a hyped-up immune system is often the result of an elevated background of environmental toxins causing cellular oxidative stress. I believe we can comfortably add microplastics to this ever-increasing list.”

“All of this makes it obvious how important it is that more research into the impact of plastic on health is carried out,” explains Lam.

As for how to do this, there are a few steps to take, the most important of which, according to Hunnes, is voting for politicians who will take steps to reduce our reliance on plastic. (The E.U. has taken great strides in this direction.)

On an individual level, meanwhile, Baechler notes that we can try to reduce or completely phase out our reliance on plastic water bottles, which, according to one paper, would reduce microplastic consumption from 94,000 microplastics annually to 4,000. Storing foods in containers made of something other than plastics, such as glass, or buying foods in plastic packaging, would further diminish our exposure.

“There is no way to completely avoid these contaminants. They are everywhere on earth,” says Brown. “With that being said, if you avoid eating and drinking processed foods in plastic packaging, including soda bottles and water bottles, you will certainly limit exposure to these particles.”