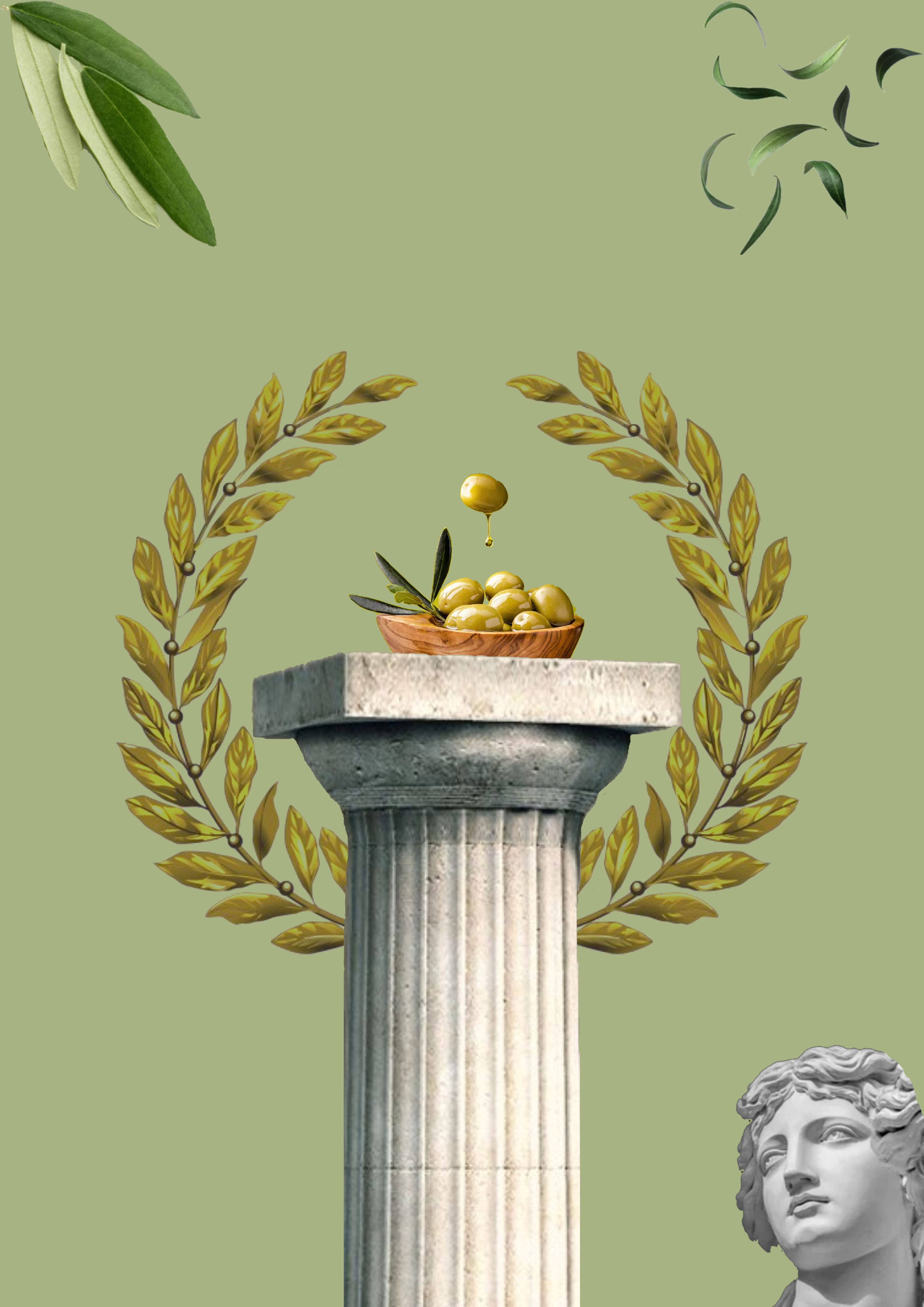 Digital Collage Artist:
Michelle Mendonça
Olive carvings decorated the pyramids of pharaohs in Egypt. The fruit appears prominently in Greek mythology: Olives were so highly regarded that the goddess Athena was said to have won control of Athens because she gifted the city with its first olive tree. Brides and winners of the ancient Olympic games were crowned with olive wreaths. The olive represented success and vitality—the essence of all things good. And both the Greeks and the Romans used olive oil as a cleanser, symbolizing purity.
by
Samantha Maxwell
10/27/2021

Few foods symbolize as much as the olive. And, like all symbols, what the olive means today is changing. In 1936, Aldous Huxley, the celebrated author of the dystopian classic Brave New World, explored the trajectory of the olive as a symbol in his essay The Olive Tree, and he argued that it had retained its original meanings.

“The association of olive leaves with peace is like the association of the number seven with good luck, or the colour green with hope. It is an arbitrary and, so to say, metaphysical association. That is why it has survived in the popular imagination down to the present day. Even in countries where the olive tree does not grow, men understand what is meant by ‘the olive branch.’ ”

Historians estimate that this ancient fruit has graced our tables for 5,000 to 6,000 years. The olive tree, like so much else, is thought to have originated in the fertile soil of the Mediterranean, growing side by side with cultures that have spread throughout the world. Olives are cemented in the fabric of those cultures—as a food, and as a symbol.

The use of the olive as a symbol is thought to have originated in ancient Greece or ancient Egypt. Olive carvings decorated the pyramids of pharaohs in Egypt. The fruit appears prominently in Greek mythology: Olives were so highly regarded that the goddess Athena was said to have won control of Athens because she gifted the city with its first olive tree. Brides and winners of the ancient Olympic games were crowned with olive wreaths. The olive represented success and vitality—the essence of all things good. And both the Greeks and the Romans used olive oil as a cleanser, symbolizing purity.

Later, Roman poet Virgil employed the olive as a symbol of peace, associating it with the goddess Pax and introducing the concept of the olive branch, a symbol that lives on to this day. Political use of the term “olive branch” to signify peace is still common. A politician is said to extend an olive branch when reading out to opponents, and clashing states offer olive branches in negotiations or to reduce tensions. Countries such as Cyprus and Eritrea feature olive branches on their flags. Even the United Nations utilizes olive branches in its emblem.

Abrahamic religions adopted the olive as a symbol in much the same way as the ancients. The oil that fueled the eternal flame in the Jewish story of Hanukkah came from the olive. In the Christian telling of the story of the Ark, Noah sent a dove to determine whether the flood was over. When the bird returned, it was holding an olive branch in its beak. A passage in the Qur’an likens a lamp fueled by olive oil to the light of Allah. In all three religions, olive oil functions as a symbol of resilience.

The foundations of olives, olive trees, and olive oil as symbols are ancient and widespread, and this meaning has endured through to the modern day.

Huxley argues the olive’s symbolism hasn’t changed at all since its most ancient origins: In The Olive Tree, he wrote that “ideas which are associated arbitrarily, in virtue of some principle, or some absence of principle … will remain associated through changing circumstances.”

Huxley, however, did not anticipate the influence economic forces and political upheavals of the 20th and 21st centuries would have on the olive’s symbolic meaning. In 1998, Mort Rosenblum wrote about the olive from the American perspective in his book Olives: The Life and Lore of a Noble Fruit: “To Americans, the olive is just a crop, and it is grown that way. Only Americans could name a silly cartoon character after the olive. No reverence.” The U.S., like Huxley, didn’t appreciate the olive’s true significance.

The American failure to recognize the olive’s veneration has nothing to do with the olive itself but rather with a highly capitalistic food system that places profit above all else—even the essential, even the sacred. Ironically, one of the origin stories for the martini—perhaps one of the most iconic modern uses for olives—claims that the drink was first made for John D. Rockefeller, the exemplar of early American capitalism. In a martini, the olive isn’t the star of the show; it’s just a garnish to accentuate the intoxicant.

Gin might be a powerful intoxicant, but it’s no match for money. And one thing to know about the olive industry is that there’s a lot of money to be made. That’s why a so-called agromafia has emerged, essentially an organized crime syndicate in the business of adulterating extra virgin olive oil with other, less expensive oils to turn a profit. Not only is the olive’s symbolism being hollowed out, but the product itself. When the juice of this bitter fruit is impure, how can the olive represent purity?

Tom Mueller’s 2011 book Extra Virginity: The Sublime and Scandalous World of Olive Oil revealed that about 80 percent of the olive oil lining store shelves is “fraudulent.” This story has been widely reported across major media outlets (and is covered in this month’s Sliced issue) and has thus hollowed out the meaning of the olive as a symbol of purity. But because consumers want the cheapest possible food products, fake olive oil has been allowed to proliferate in our supermarkets.

The climate crisis potentially threatens the traditional symbolism of the olive as a food of resilience. Typical growing patterns have shifted in recent years owing to unstable temperatures and droughts, leaving some olive farmers in Italy unable to produce enough olives to sustain themselves (or forcing them to harvest earlier than expected). Other countries, such as Tunisia, have seen massive increases in olive production, which has caused a catastrophic slump in prices. Even a tree as hearty as the olive tree (which can live to 1,000 years old) may be no match for a radically changing climate, therefore threatening its symbolic association with resilience.

The foundations for the olive branch as a symbol of peace look similarly unstable. The continuing destruction of olive trees in Palestinian territories by Israeli settlers is perhaps the most notable example of the olive branch’s symbolic fall from grace. The uprooting of olive trees and attacks on olive farmers compromises hope for political resolution and completely undermines the peaceful symbolism of the olive. That this is happening at the meeting point of the three biggest Abrahamic religions which venerate the olive makes this image all the more stark.

It’s clear that Huxley could not have anticipated how much the world would change in the course of the 85 years since he wrote The Olive Tree. Accelerated global capitalism had not yet captured the global food system. Scientists were decades away from understanding how humans were destroying the planet with unsustainable economic and environmental practices. And although the political tone at the time may have indeed been dark, the chaos that would ensue in the 21st century and the years leading up to it must have been unfathomable before the Second World War.

It would be nice to think that a symbol as ancient and as meaningful as the olive would stand the test of time—as Huxley argued it would—despite forces that have threatened to topple it. But what we should be asking ourselves is whether the traditional symbolism of the olive is still of any use to us. We must ask ourselves if it’s still accurate to associate olives with purity, resilience, or peace. Perhaps the traditional symbolism of the olive will evolve with the particular and troubling conditions of our age—an inequitable food system, a climate crisis, and worldwide political and religious strife—to give new meaning to the existing lore. If the olive can survive the climate emergency, won’t it have proved its resilience once and for all?

While Huxley could not have foreseen how drastically the world would change in 85 years, he was wrong to think that such an “arbitrary” symbol would not be affected by “changing circumstances.” All symbols will be altered, however slowly, by new social, cultural, and economic forces.

We are entering our own brave new world, one that will require us to challenge our existing conventions on every level. The olive will not be spared.