ISSUE
8
-
Plastic
Why plastic packaging persists: A view from the food industry 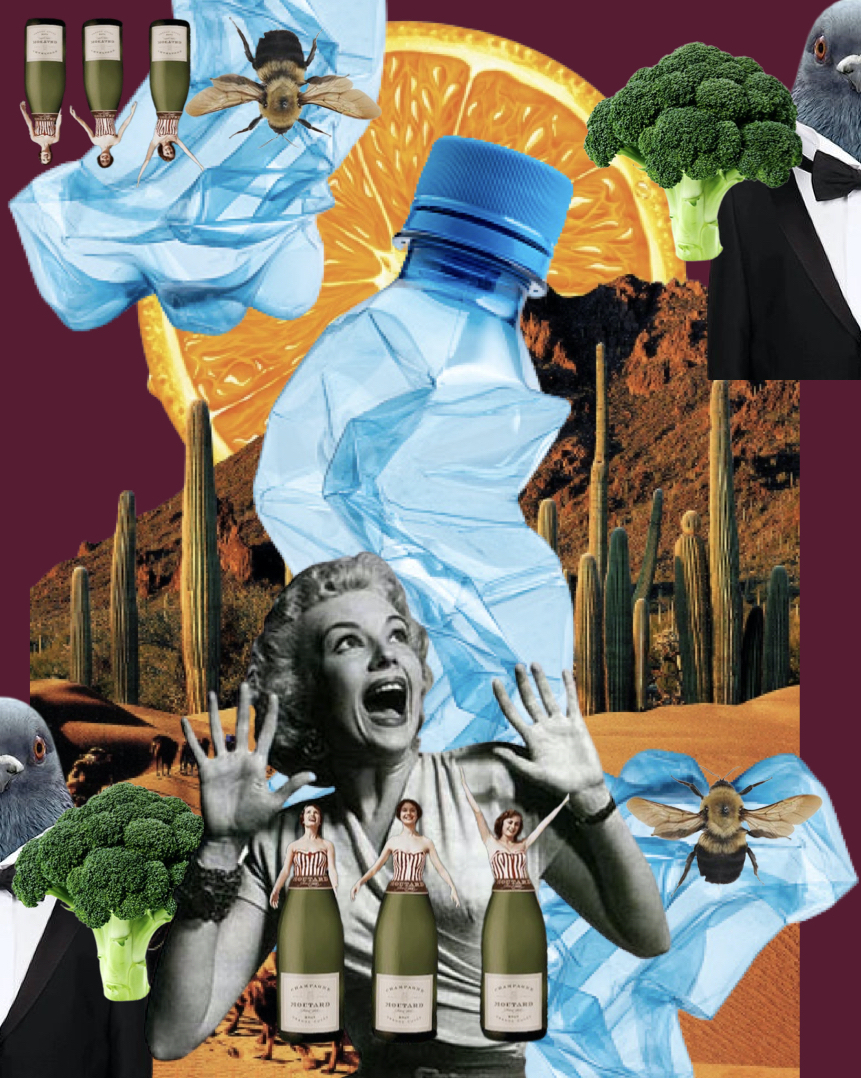 Digital Collage Artist:
Vaaruni Jha
The material is problematic in the short term and the long term, yet most of our foodstuffs are wrapped in it. Why?
by
Tabby Kibugi
5/5/2022

Last year, German supermarket chain Lidl GB removed more than one billion pieces of plastic as part of its strategy to eliminate plastic waste and support continuing global plastic reduction. In a similar move, grocery store Trader Joe’s removed four million pounds of plastic packaging from their produce and replaced them with sealed fiber trays. The latter store had committed to removing unsustainable materials like plastic following regular public outcries on social media platforms that the retailer was using too much plastic. More major food corporations like Starbucks, Coca-Cola and McDonalds have vowed to reduce the amount of single-use plastics in their food products.

The anti-plastic movements in the food industry have also spurred similar 'plastic attacks' in supermarkets by plastic-ban activists — an activity that involves a customer unwrapping their shopping and returning the single-use plastic packaging to the store. For many concerned citizens who have been continually protesting plastic packaging in the food industry, such actions have earned praise at a time when more than 300 million tonnes of plastic waste is produced globally every year.

Despite the rise of these movements, however, a study revealed that plastic continues to be one of the most used packaging materials in the food industry. It’s found in almost all areas of food, including fruits, grains, pulses and sugar. The material, which was first discovered in the 19th century, gained popularity as a significant player in packaging in the late 70s and early 80s as other materials like paper began to fade. Today, plastic continues to be one of the packaging materials preferred by most.

Hortense Julienne, a 46-year-old baker from the U.K. and founder of Miss Nang Treats, attributes the continuing and pervasive use of plastic to the many properties that make it an ideal choice for packaging food. “Plastic has been the package by default in the food industry owing to its durability. It’s also resistant to water and [it’s] weightless. For food industry workers who make confections like me, choices by consumers are first determined by how the product looks, so it’s important to have a clear packaging material like plastic without exposing the food.” Hortense says that, were it not for the environmental concerns and the lack of care often displayed in disposing of plastic, it would remain the best invention since sliced bread.

Packaging dry and wet food ingredients in airtight plastic is also the perfect way to preserve food in good condition. “When food ingredients are placed in the freezer using a plastic material, there will be zero contamination no matter how wet the surroundings get,” says Hortense.

For many food industry workers like Hortense, incorporating a material like plastic cling film is necessary to preserve the shelf life of food, thereby reducing its wastage. According to a food waste index report conducted by UNEP in 2021, around 931 million tonnes of food waste was generated in 2019 alone. Wrapping cucumbers using polyethylene film can extend their shelf life up to 24 days, in addition to retaining their freshness, colour and firmness.

“Even in the baking industry, I am yet to find a better alternative to clingfilm,” says Hortense. “I have seen some of my baker friends freeze off their pre-made cakes using cling film and I cannot see an alternative good enough to render the same result after defrosting.”

Fruits like grapes regularly require air circulation around them, and perforated plastic bags are known to maintain their freshness, something Emma Wanjiru, a fruit vendor from Nairobi, Kenya concurs with. “Previously, I used to just heap the grapes on my stall then a customer would hand-pick the ones they wanted. They’d get moldy after a few days, and eventually, I’d have to discard them. Wrapping them in ventilated plastic bags has drastically reduced in-store wastage of my grapes and eliminated potential mold and decay.”

Pre-cut fruits, which most fruit vendors use to make fruit salads, tend to absorb molecules in the air. Lightweight plastic wraps make it easier to maintain the freshness of such salads and increase their consumption rather than tossing spoiled food. Keeping fruits and vegetables fresh can sometimes be difficult because every one of them has their own way of being stored to maximize freshness. However, Wanjiru says a little bit of plastic makes everything easier.

A recent forecast by S&P Global Ratings revealed that plastic packaging is unlikely to be replaced in the future because of the advantages it holds over other alternative packaging options like paper or glass. Hortense says even though the latter could be an ideal replacement, it’s much heavier and always requires a complicated sealing solution for food packaging. “The same piece of plastic can be twisted on itself and just knotted on itself, so it’s much easier to use.”

However, Robert Herridge, a representative of QAIC packaging with 34 years of experience in the packaging sector, says that the term compostable is just used as a marketing strategy to consumers. “Compostable packaging needs to be processed at an industrial composting facility. If the consumer puts it in a home composter, it won’t work, nothing will get composted. The consumer also won’t spend the time taking a cucumber wrap to a composting facility. But they’ll think it’s being composted so this appeals to their green conscience.”

Were it to work, Hortense says that it still has its cons. Having switched 70% of her packaging to clear imitation plastic made of wood pulp, the compostable plastic, despite being labeled as compostable, still crumples easily and is more expensive than the traditional plastic counterpart. Manipulating the material will take some time to get used to, such as getting compostable plastics with windows for presentation boxes.

Farhana Ibrahim, who runs London-based Binta’s kitchen, shares the same sentiment. She tried to switch to such natural materials to package her food but they were unable to withstand the heat and they would always disintegrate. “Plastic is the only heat-resistant material that allows me to eliminate the use of preservatives for my food pouches, which are toxic to the body,” says Ibrahim.

Despite the fact that plastic could be replaceable in the food industry, there is still a lot of work to be done in terms of getting a packaging material that is affordable, widely available and with all the benefits that plastic has for packaging food. Ibrahim hopes to see plastic being used only when it is absolutely essential, but affordable alternatives still need to exist. “It’s difficult for a small brand to be sustainable and still be profitable,” she says.

Hortense compares it to being on a diet — it takes a long time to shed off the pounds. “We must allow ourselves time to find alternatives and gradually replace plastic not only in food packaging, but also in every aspect of our lives.”