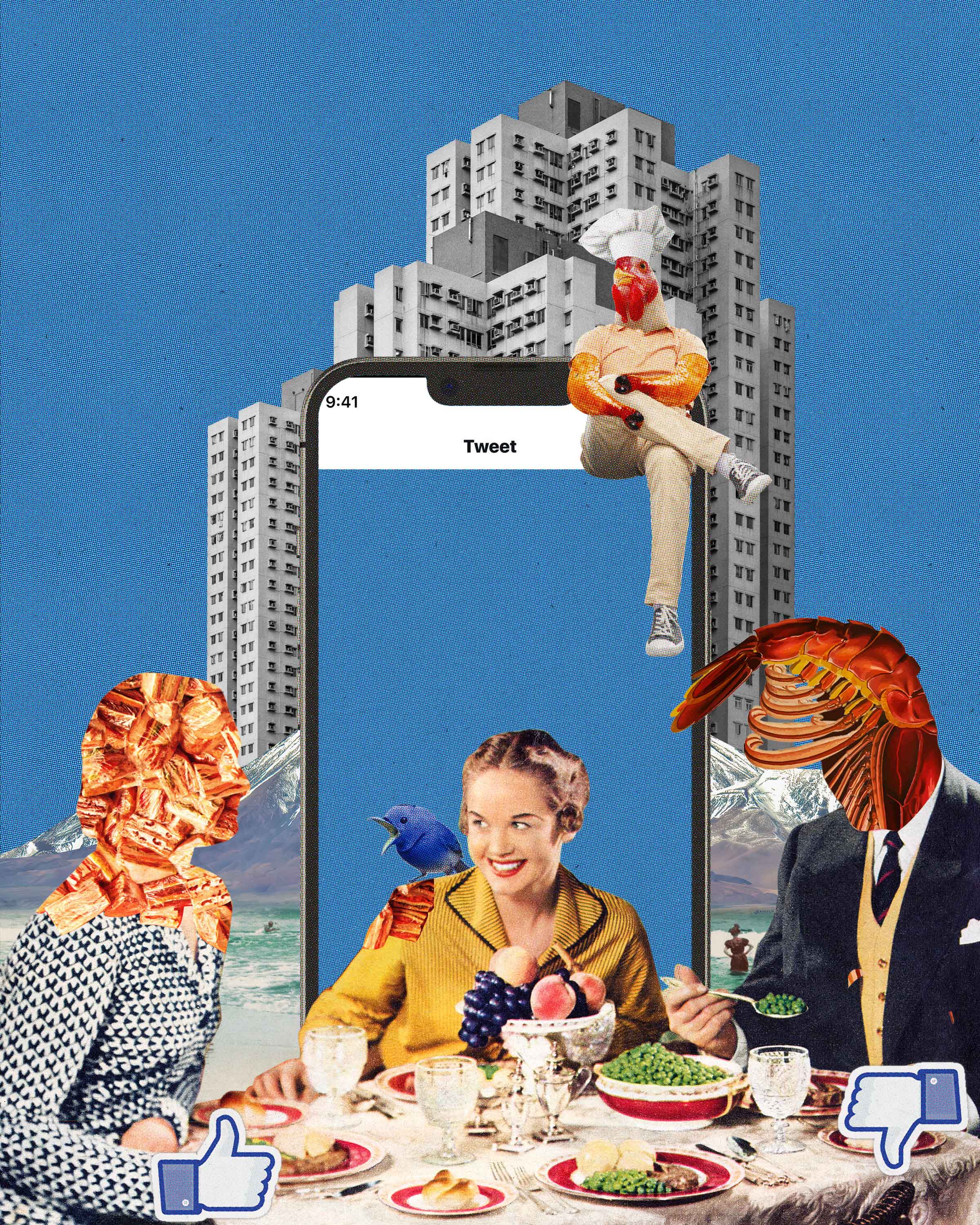 For the past decade, it has been on Twitter where the scandals of the day have played out, energized by outrage and bad faith. Food brands certainly haven’t escaped this. In fact, food Twitter is so ripe for scandal that brands such as Wendy’s and Heinz have teams of people name-searching 24/7 so they can find and prepare for whatever horrors await their brands online.

In reality, even though Twitter has supercharged scandal by enabling anyone with an email address to start or participate in one, food brands remain largely unaffected. Scandals in some cases can even lead to an increase in their market standing. Twitter may offer more opportunities to hold people to account, but larger trends suggest food corporations are largely unaccountable to online pressure.

In 2020, it seemed that Robert Unanue, the chief of Goya Foods, had landed his company in hot water. He had expressed support for then-president Donald Trump, stating "We're all truly blessed ... to have a leader like President Trump who is a builder." That a rich white guy would express support for DJT was shocking but not entirely surprising.

The promise of the internet as a democratizing force has sadly offered mixed results at best. ... It has also made us really weird. Food companies’ own social media accounts might be the weirdest of them all.

Unanue’s delusional statement inspired backlash and a boycott hashtag to trend for days. The folks in the Goya public relations department were no doubt queuing their resume to upload on LinkedIn to save them the trouble when the mass layoffs would likely hit.

But those resumes remained in their Google drives and unviewed by potential employers.

After a blistering four-week barrage of tweets and Twitter warriors brigading the mentions of Goya’s Twitter, the sales reports came in. These reports found that despite the massive social media backlash, that the company saw little to no effect on their actual sales and that sales actually increased for a few weeks before dropping to regular levels. If you were a can of beans in a Republican-voting district you were flying off the shelves.

To be fair, there was a counter hashtag, or a #buycott in favour of the bean company, posted by what can only be assumed were mostly lonely uncles. Sadly, they were their own biggest fear — a minority — with only 25% of the Twitter posts about Goya Beans registering support for the bean company.

Still, people came out online in their thousands to support a brand in the midst of a scandal. Actual human beings, defending beans like their Dad was about to whip their ass for trading the family cow for them. People coming out and defending a food company whose executives would spit and hiss at them if they approached at a pace quicker than 7km an hour.

The promise of the internet as a democratizing force has sadly offered mixed results at best. It has created a world in which everyone has a voice, but instead of bringing people together it has made us more alienated from one another. It has also made us really weird. Food companies’ own social media accounts might be the weirdest of them all.

Posnanski tried to go thermonuclear by indicating he would rather drink the piss of whoever was behind the account.

Much has been written about the rise of “weird” food brands online. Wendy’s social media account is indistinguishable from a 4chan poster in 2007. Arby’s instagram account places Goku, Naruto, and Monkey D. Luffy next to a MeatCraftTM. When food companies aren’t the subject of scandal online, to the naked eye, they are mostly just dicking around, having fun and posting with their millions of closest friends online.

In May 2019, Twitter user Tony Posnanski and Vita Coco Water’s social media team started mixing it up online about the validity of coconut water as a drink. Posnanski tried to go thermonuclear by indicating he would rather drink the piss of whoever was behind the account, but it was actually the coconut water gurus that fused two atoms together to make a larger atom and tons of energy.

In response, Vita Coco Water’s Twitter team posted a picture of a woman in a bathroom stall holding what looks like a jar of urine, with the caption “address?” Getting dunked on that hard will have been mortifying for Posnanski, but not as mortifying as realizing 32,000 free thinking individuals liked the post, too.

The post itself tells us that there were at least two people behind that stunt, the subject and the photographer. In reality there are actually often entire teams of people behind these brand accounts. They work around the clock in order to create these moments, workshopping jokes, replies and quote tweets to maximize their audience.

In this case, Tweeting the jar of urine actually helped out Vita Coco Water. Market research showed the posted picture “drove purchase intent amongst a younger consumer”. When a food corporation receives a round of applause from a raucous and captive audience, they sell more things. When everyone’s screaming at them telling them to shutter their doors, the needle doesn’t move.

In this sense, social media has become a place in which food companies only reap the rewards from notoriety and endure none of the costs. The big three platforms (Twitter, Facebook, and Instagram) have become a safe space for food companies.

Burger King and its creepy me-too-proof mascot were recently the subject of scandal in March 2021, when the food company foolishly posted “women belong in the kitchen.” Posting this on International Women’s Day immediately was particularly offensive and stupid. They were trying to create awareness about a scholarship program for women’s culinary careers. They failed miserably.

Burger King was trending on Twitter for several days, but as with Goya Beans, its sales remained laregely unaffected. Fortunately, this didn’t drive an inverse effect on Burger King’s market standing in the same way scandal did for Goya Beans; wounded culture warriors didn’t drive up sales because Burger King was being “based” (mysoginistic). The very correct online mob was able to get the company to remove its post and Burger King to issue an apology — but not before the initial Tweet created space for abusive messages in the mentions; and crucially without holding the fast food giant to account.

This is a far cry from the 1970s and 1980s, when scandal and public outrage forced Nestlé to stop selling what essentially amounted to poison to its African markets. The boycott began in 1977 as the company aggressively pushed its baby milk infant formulas where they weren’t needed. Nestlé was accused of getting mothers hooked on a formula they never needed. The call for a boycott spread throughout western societies, and ultimately resulted in Nestlé issuing an apology and adopting a World Health Organization Code on infant formula.

Just as bleak is the fact that as we scream into this void, it’s not the real evildoers that are receiving our scorn.

Today, social media is of course the primary arena for boycotts and campaigns. In theory, the big three platforms offer a direct line to food companies to weigh in and attempt to hold them accountable. In reality, it seems as if social media is an echo chamber in which people scream and scream with no tangible effect on the companies that provide food. It’s hack to say at this point, but social media sublimates rage into background noise.

What’s frustrating is that there are good people with progressive intentions behind the social media accounts and advertising departments of these food companies. Ads are more diverse than ever, reflecting an increasingly diverse society in which all members of society rely on the slop that they’re pushing.

The issue at hand is that this progress we are seeing is not uniform. In fact, we can see that companies like Nestlé and their ilk are more insulated from the consequences of outrage than ever.

Just as bleak is the fact that as we scream into this void, it’s not the real evildoers that are receiving our scorn. It’s Lane Rawlings, the then-Vita Coco community coordinator, or, as you know her, jar-of-piss-girl. It could also be a team of beleaguered social media interns just trying to go viral by posting their hearts out, mostly in vain.

Social media may only offer one further way in which food companies can insulate themselves against criticism, but you can be sure they’re cooking up more posts and hot takes for the next decade.