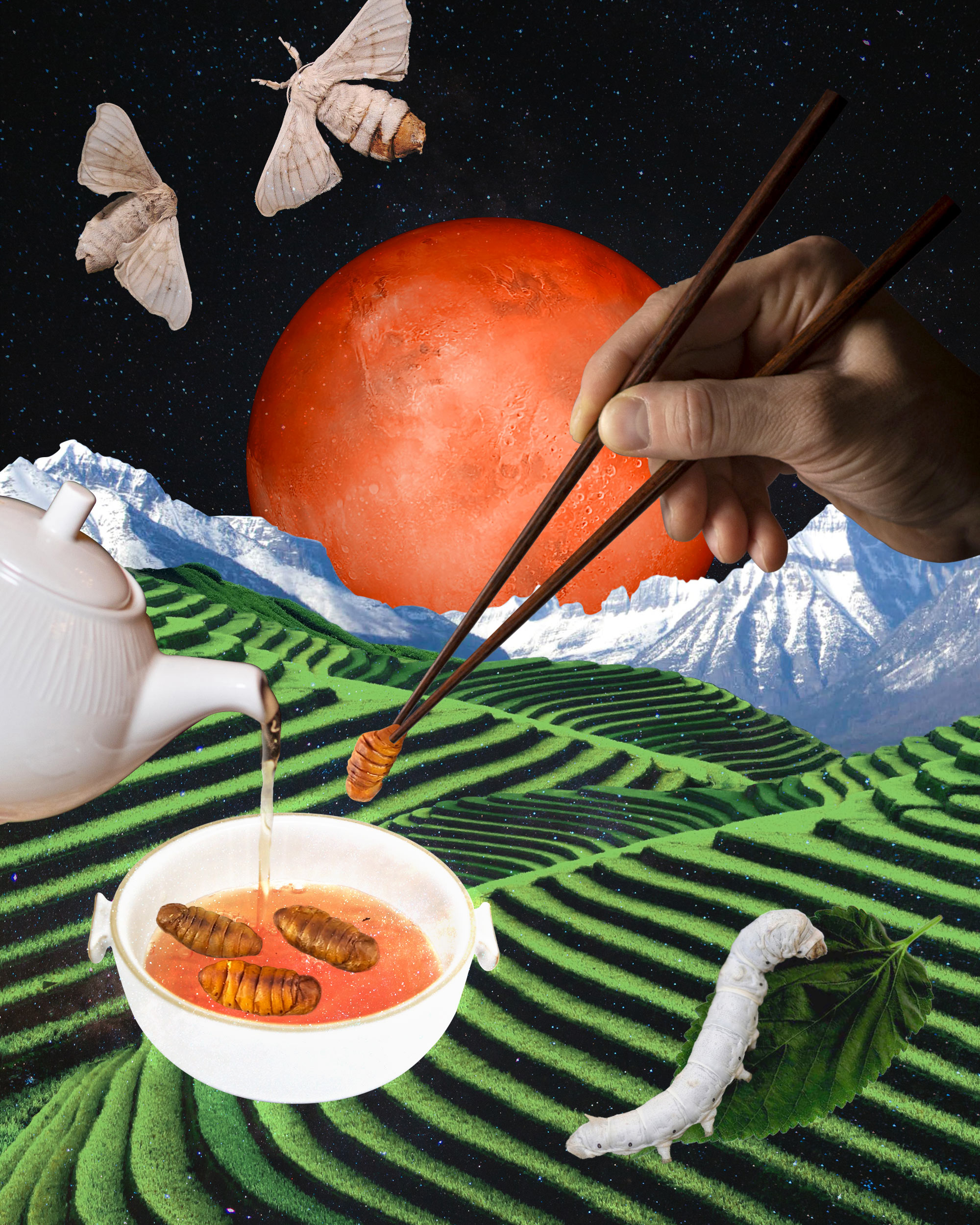 Digital Collage Artist:
The by-product of silk production features in the snacks and meals of many silk-producing countries, but others have so far refused the novel delicacy
by
Giulia Alvarez-Katz
6/30/2022

While many countries across the world eat insects, fewer will eat their waste. Silk production, which is known as sericulture, however, has popularized both in some parts of the world. In some silk-producing countries, it is common to eat silkworms, especially the main waste product of sericulture — pupae.

In China, for instance, you can find silkworm pupae done kebab-style at Wangfujing Street Night Market in Beijing. It’s a street food snack enjoyed with a beer at the end of a hot day, or a quirky novelty for tourists looking for an authentic experience. In India, prized Eri silkworms in the larval stage make for a delightful addition to a stew or stir-fry. In Korea, they’re eaten both in the larval and pupal stage, served on the street in enormous woks or purchased at a gas station in a can. Vietnamese recipes for silkworm pupae involve a heavy use of aromatics, like lime leaves and lemongrass.

Legend has it that sericulture was born when Empress Xi of China found a silkworm cocoon in her hot tea.

Eating silkworms in these silk-producing countries is common. But, even though regions as far west as the Balkans produce silk, there’s little evidence that any countries further west of Pakistan have taken on this culinary delicacy.

If eating silk pupae is so strongly ingrained in some silk-producing countries, why did it not catch on in other countries practising sericulture? To understand this, we need to understand the history of silk production, and scour the Silk Road in search of answers.

Legend has it that sericulture was born when Empress Xi of China found a silkworm cocoon in her hot tea. As she tried to fish it out of her cup, she unraveled the delicate threads of the cocoon and correctly assumed they would make fine fabrics. Historians guess that this story is myth, but sericulture’s long history in China is undeniable.

Sericulture is said to have been developed by the Yangshao people living along the Yellow River (Huang He) in the Neolithic period. It remained more or less an exclusively Chinese craft until the 2nd century BCE, when the advent of the Silk Road —a network of trade routes spanning 6,400km across East and Southeast Asia, down to the Horn of Africa, up into Central Asia and across to the Middle East and Europe — saw silk production spread far and wide. However, even with trade routes open, Chinese empires controlled the vast majority of sericulture for nearly 1,000 years. By the time anyone else adopted sericulture, centuries of the silk trade had passed.

Like anything that migrates across regions and cultures, some sericultural practices diffused differently than others. Understanding how silk is made can reveal insights about the way sericulture was adopted in different places.

Agriculture was in its relative infancy when sericulture evolved and spread, and it wasn’t necessarily a reliable way to feed the rapidly growing human population, yet.

The life cycle of a silkworm is similar to any moth or butterfly: a larva hatches from an egg, eats everything in sight (in sericulture, silkworms feed exclusively on mulberry leaves), and wraps into a cocoon, becoming a pupa. These pupae are either allowed to metamorphose into mature silk moths to reproduce, or they are boiled in their cocoons to harvest. Their cocoons are made of silk, which can be removed once boiled. After harvesting, producers are left with cooked silkworm pupae. Some sericulturists dispose of these pupae, but others turned this waste into food. In India, for instance, Eri silkworms are eaten in the pupal stage as well as the larval stage.

Finding use for waste products is nothing new, and was perfectly natural in the ancient world. Agriculture was in its relative infancy when sericulture evolved and spread, and it wasn’t necessarily a reliable way to feed the rapidly growing human population, yet. If a waste product was edible, it probably would have been considered foolhardy not to consume it. In China and the areas that directly surround it, entomophagy — the practice of eating insects — was commonplace, so eating pupae was logical.

There were plenty of reasons to embrace eating silkworm pupae at the time. Silkworm pupae is rich in protein (and other nutrients), which nutritional anthropologists say was hard to come by during the neolithic period, due to the instability of early agriculture and the intense labour that acquiring other protein sources required.

Given this, it is difficult to see why other cultures along the Silk Road did not adopt the practice.

In western regions known for sericulture, such as in the Levant, Iran, Turkey and the Balkans, no tradition of consuming silkworms exists, despite centuries of trade, migration and cultural intermingling along the Silk Road. While silkworm consumption seems to have spread from China with the expansion of sericulture, that’s not true for anywhere west of India.

Entomophagy was for a time indulged in Southwest Asia, until agriculture started to improve in the region and humans began to view insects less as food and more as pests and vermin. But sericulture reached Southwest Asia and even the Balkans centuries before agricultural intensification in the Mediterranean. So if silkworms were nutritious and less intensive to rear than animals, then why not continue eating them?

Part of the answer lies in the environment. Entomophagy anthropologist Julie Lesnik theorizes that while cultural and religious beliefs certainly affect whether a people eats insects, ecology shapes our decision-making in more consequential ways than we might expect. Lesnik’s Latitude and Attitude theory supposes that places closest to the tropics are the likeliest to practice entomophagy, because of the greater levels of species diversity at those latitudes, and that the environmental experience would have informed cultural norms about entomophagy.

While the regions that practised sericulture without eating silkworms are close to the Tropic of Cancer, they weren’t exactly lush jungles. “My hunch is that the region here is more arid than similar latitudes elsewhere, and hunting and domesticated meat is the easiest way to make a nutritional life for yourself when not in a lush environment,” Lesnik says.

“So, in meat-centric cultures, insects are nutritionally redundant.”

By this reasoning, people in these areas were already getting enough meat and protein by the time sericulture arrived, so there was little need to add a new protein to their diet — let alone a protein that would also have been considered waste. Just as the environment shaped the culture of these regions, so, too, did it shape people’s perceptions about certain species and their edibility.

The countries who’ve (so far?) refused this sericultural delicacy also share a religion — Islam— although the religion reached each place at different times. (Islam reached India by the 7th century, compared to the Balkans where it arrived in the 15th century.) For newly Islamicizing cultures and regions, adopting Islam meant some very specific changes to diets and lifestyles for Muslim communities.

But this question — of whether eating insects is permissible within Islam — is not going away. In Shia Muslim chatrooms, for instance, the discussion continues.

Prohibitions on certain foods exist in Islam — for pork, for instance — but there’s nothing that prohibits eating insects. Entomophagy is and was a somewhat tenuous point among Islamic scholars, which leaves unanswered questions that are up for debate. Where consensus exists, different Islamic schools of thought agree that grasshoppers can be eaten, because the Prophet Mohammed reportedly ate them. Islamic jurisprudence regarding other arthropods is murkier. The interpretations and beliefs about whether entomophagy is permissible are innumerable and vary across regions and sects, but generally the practice wasn’t commonplace among Muslims at the time. If the practice was already rare in their culture and its religious permissibility unclear, it is unlikely it would have been adopted.

But this question — of whether eating insects is permissible within Islam — is not going away. In Shia Muslim chatrooms, for instance, the discussion continues. In these spaces, Islamic jurisprudence is often invoked to say that eating insects is implicitly prohibited, while others consider the place of this practice in our futures — echoing growing calls for more cultures to adopt insect-eating. Even those who believe it is implicitly prohibited recognize that eating insects will be an important part of adapting our diets to the climate crisis. Indeed, the UN has been advising for nearly a decade that we should adopt insects into our diets, describing them as an “underutilized resource.”

There is no clear answer as to why silkworm consumption never made its way to the Mediterranean, but what we know can help us understand how certain foods — such as silkworm pupae — are adopted. The experience of silk-producing countries reveals how the environment and culture interconnect, how perceptions about necessity and acceptability can be decisive. This is likely why countries west of India have never adopted the practice of eating silkworm pupae.

But even if there is no clear answer, understanding the context and process is important. There is an increasing need for humans to eat insects, and for all parts of life to make better use of waste. Fashion is no different, and (as this edition of Sliced shows) it is starting to embrace food waste as a source of sustainable materials.

So, perhaps it is time we start embracing one of fashion’s waste products as a sustainable food source. By following the Silk Road — and tracing the spread of silkworm pupae as a foodstuff — we have a good starting point for understanding how insects and waste are adopted and rejected as foods.