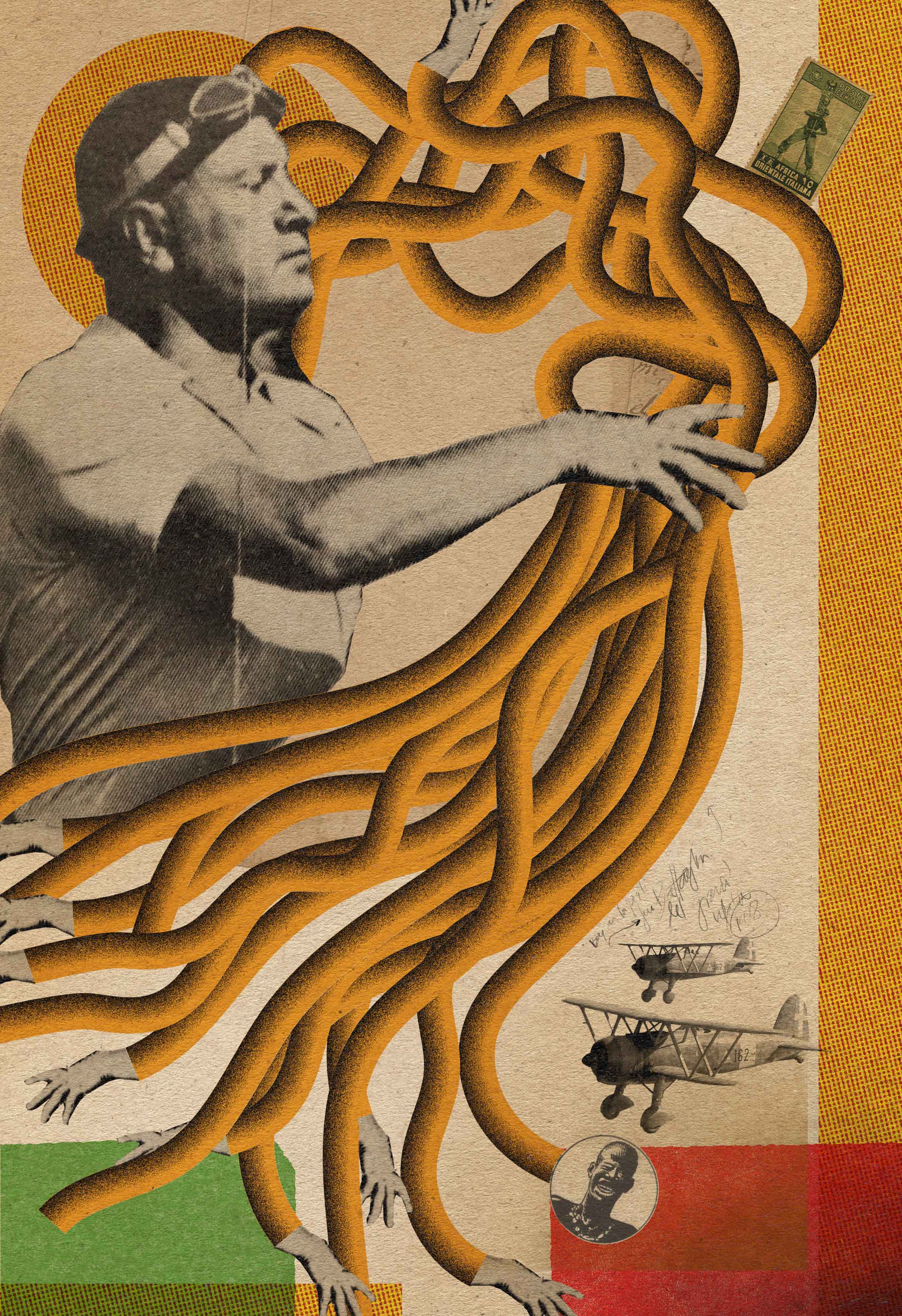 From Mussolini’s rise to power until the fall of his fascist regime, Il Duce sought to establish total control over all spheres of life — including food and the kitchen. But after forcing the country to abandon pasta in favour of rice, he only succeeded in turning working-class women against the state and destroying the country’s health.

In Italy, food has always connected land, culture and people. In the 20-year period after WWI, from Mussolini’s rise to power in 1925 until his regime fell in 1945, the fascist state launched policies and propaganda campaigns that dually sought control over domestic foodways and the domestic sphere. In pursuit of total control over Italian life, Il Duce needed the state to control how food was produced, consumed and conceptualized.

The regime dreamed of future fascist generations of hyper-patriotic Italians. The regime was concerned with how food and future generations could be “raised” in a way that benefited the state. To control food production, as well as social-sexual reproduction, Mussolini had to target the beating heart of the domestic sphere itself — working-class Italian women.

By strictly regulating all things food, as well as binding women to the private home as mothers, wives and homemakers, the regime could exercise greater control over the private lives of Italians, in turn influencing their eating habits and, importantly, their birth rates. The centrepiece of these nationalist and natalist efforts was the Battle for Grain. Mussolini sought national self-sufficiency by liberating Italy from foreign grain imports. To do so, Il Duce attempted to replace the national staple in Italian kitchens, pasta, with rice.

Rice grew well in the northern regions of Lombardy, Piedmont, and Veneto, while flour for pasta was largely imported from Turkey. Rice could be made cheaply by relying on underpaid working-class homemakers, the mondine — women rice harvesters. Foreign grain for pasta and bread had to be bought at increasing expense; Italy’s colonial violence in Ethiopia brought economic trouble at home and international sanctions. The regime was desperate for both stable domestic food production and future fascist fighters.

The Battle for Grain stemmed from the principle of autarky, an economic concept centred on self-sufficiency, limited trade and a closed economy. The regime promoted a simple and calorically-stringent diet entirely based on domestic produce: citrus fruits, tomatoes, olive oil, wine, and of course, rice. Promoting the domestic production and consumption of rice while discouraging imports of flour for pasta turned fascist Italy into a pro-rice and anti-pasta state at once. The Ente Nazionale dei Risi, National Rice Board, was established in 1928 to promote rice across the country, as the regime tried to recreate cuisine to meet their nationalistic vision — one grain of rice at a time.

For historian of fascist foodways Carol Helstosky, this was a period of (attempted) “alimentary sovereignty” — the regime sought complete self-sufficiency over food. But true freedom and choice over what one’s household ate was simply not on the table, especially for poor working-class and peasant women. After the chaos of WWI, much of the country was poor and hungry. The regime’s strict, austere diet meant Italians consumed the lowest average number of calories in western Europe. Nutritious, protein-rich foods were rarely available and never affordable. Making alimentary sovereignty seem appetizing — particularly to the kitchen’s feminine lynchpin — was a challenge. But to pacify the working classes over the meagre diet, the state appealed to their patriotic sensibilities.

Propaganda campaigns targeting women capitalized on their pride as mothers and wives of present and future fascist fighters. The campaigns encouraged and offered rewards for state loyalty and reliance; to eat rice was to eat for the regime. State trucks travelled the countryside to distribute rice to women at fascist rallies, particularly in southern Italy, where they also brought pamphlets containing not just recipes and nutritional information, but powerful propaganda. As they distributed thousands of free rice samples, they also distributed hundreds of thousands more propagandic “recipe” pamphlets. These ricettari were designed to cross the threshold into private Italian homes, tucked neatly into the apron pockets of dutifully patriotic housewives.

These ricettari from Il Duce contrived to convince women that to eat rice was to directly support the health of Italian troops and Italian families. The ricettari were less about the recipe, and more about the pronatalist and patriotic messaging. Women would find a state-approved recipe and information about breastfeeding, next to military insignia. The ricettari were designed to influence women and their bodies from the inside and out. According to the ricettari, rice could provide an edible remedy to the struggles everyday Italians faced: rice would fortify vulnerable bodies and babies in anticipation of war; eating rice would strengthen the fighting men, who would win the war and return home to their wives, with whom they would produce many future fascist generations.

But the propaganda didn’t stop with the ricettari. Ente Nazionale dei Risi advertisements were featured in women’s magazines. One such ad from 1935 features a plump blond baby, happily spooning rice into their mouth while sitting atop a mounded bag overflowing with rice. The cheery baby has chubby, rosy cheeks. It is a perfectly fat future fascist fighter. The text around the baby commands “Il Riso E’ Salute, Mangiare Riso” (Rice is Health, Eat Rice). Behind the happy infant are background images of the mondine bent labouring over rice patties. For the state, the mondine communicate the nationalist link from domestic agriculture to the domestic sphere, entwining food production with reproduction while romanticizing working-class femininity.

Rice may have been an accepted aspect of the northern Italian diet, but in the long-suffering South, pasta was and is much preferred. Southern Italians rejected rice. They simply did not want to eat it, no matter the propaganda. Eating rice brought back grim memories of WWI. It was considered unappetizing and bland. They preferred to feed the rice samples to their dogs.

To ensure that households in the South broke with regional culinary habits and followed the new nutrition guidelines, the regime endorsed “culinary futurist” declarations that stated how pasta made Italians heavy, brutish and slow. This caused an outcry. Southern Italian women banded together in defence of pasta as officials wrote protest letters in adoration of their beloved “food of angels.”

Meanwhile in the North, at the very centre of the nation’s rice production, the mondine continued to labour in shocking conditions to produce Il Duce’s food of choice. The propaganda of the time manipulated the symbol of these hardworking women as emblems of state-sanctioned feminine virtue and virility. In reality, the rice patties and harvesters of the 1920s became la zona rossa — or the red zone, a hotspot of Socialist-Communist resistance.

A melodic spirit of rebellion echoed across the water of rice patties. The mondine are well remembered today for the chorus of resistance songs that they sang as they toiled. The now-popular anti-fascist folksong Bella Ciao is just one of many songs the mondine sang to fortify themselves as they worked. And as they worked, the mondine enacted other partisan efforts throughout the fascist period and beyond. These women boldly staged protests, strikes and organized leftist agitations. During the German occupation of WWII, many were involved in anti-Nazi partisan efforts by couriering messages, sheltering other members of the resistance in their homes, and fighting at the frontlines.

Very high miscarriage rates and disrupted menstruation became facts of female life in the rice patties, further subverting the state’s desired symbolism of the mondine as (re)productive state-workers. Many mondine reportedly welcomed their miscarriages and reproductive troubles, because the last thing they needed was another mouth to feed during this precarious time. Indeed, because of their bold resistance and anti-fascist outlook, the mondine became common targets of brutal police violence. As such, their iconic white scarf transformed from a symbol of robust, fascist-sanctioned femininity into an emblem for the partisans.

Food policies were one of the many ways the fascist regime blundered in attempting to physically assert total control over the daily life of its citizens. To say that Mussolini’s autarkic policies were a failure is an understatement; as policies of alimentary sovereignty intensified, the quality and quantity of food available diminished with disastrous consequences. Compared with other European countries, popular nutrition levels were dismal even in the lead up to WWII. Wretched nutrition levels only intensified following the Nazi occupation and exploitation of Italian resources. The average caloric intake dipped lower and lower, and most foods became available only on the black market. These conditions created widespread misery for working-class Italians and an underfed population that lacked the fortitude necessary for basic survival.

For all the so-called order fascism promised to create and maintain, the fascist era was a darkly chaotic time in Italian history. Mussolini’s equally chaotic assassination marked the beginning of the end of this particularly fraught chapter, as well as the regime’s sprawling and largely unsuccessful campaigns to promote domestic rice consumption as well as sexual reproduction.

Despite the efforts of the Ente Nazionale dei Risi and the “Battle for Grain”, Italy suffered incredibly during WWII precisely because their population came into the war astoundingly malnourished. Italy still has one of the lowest birthrates in the world today and, importantly, pasta in its infinite local varieties remains Italy’s national treasure. While fascism and dangerous right-wing sentiments remain stubbornly threaded in Italian politics today, the spirit of resistance lives on in Italian domestic life. During Italy’s difficult covid-19 lockdown in early 2020, it was the rice harvesters’ chorus of Bella Ciao that could be heard ringing in unison from the balconies across the nation.