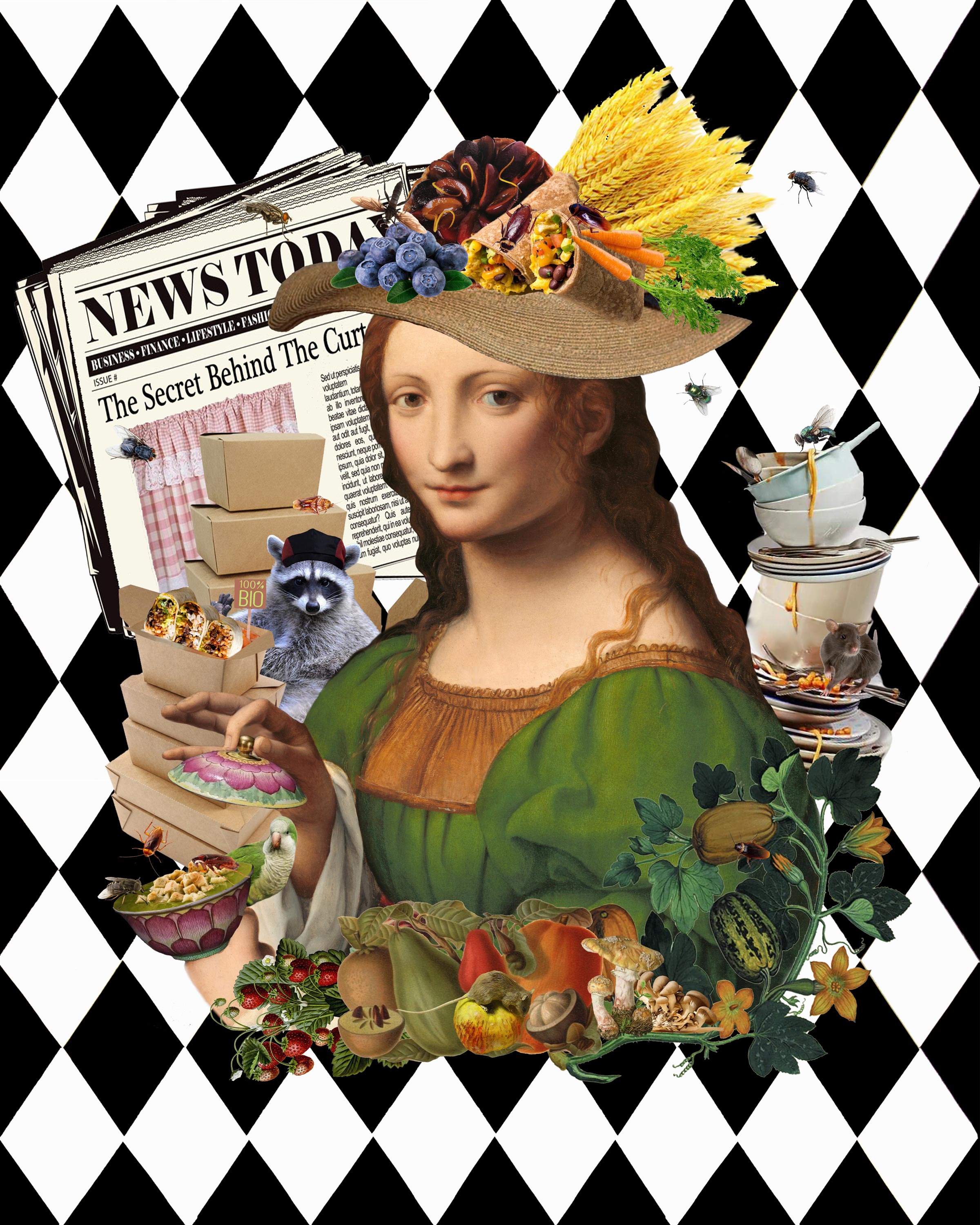 Digital Collage Artist:
Di Lin
The food chain, which claims its one guiding principle is goodness, has faced a raft of serious allegations over its workplace practices.
by
Lola Méndez
10/11/2022

Being organic and vegetarian doesn’t make a company inherently sustainable or socially responsible. For example, while the Swiss food giant Nestlé has introduced more plant-based options to its food empire, such as Freshly’s Purely Plant, Garden Gourmet, and Sweet Earth, it has also long faced allegations of deforestation, problematic water sourcing, and child slavery.

Then there is Amy’s Kitchen, a prolific organic vegetarian food company that has been offering affordable, healthy, ready-to-eat meals since 1987, but is now facing calls for boycotts after reports emerged of alleged workplace hazards in its California factories.

Andy and Rachel Berliner started the family-owned business in Petaluma, California by selling organic veggie pot pies from home, and they named the brand after their daughter Amy. The $600-million food empire is best known for its canned soups and ubiquitous presence in the frozen section of grocery stores with a selection of pizzas, pasta, and burgers. Amy’s sells more than 200 vegetarian products in more than 30 countries and has fast-food restaurants in California.

You’ll likely recognize the rustic packaging of Amy’s fan-favourite burritos, another staple of the frozen section. According to Teamsters Local Union 665, which is part of the largest union in the United States, Amy’s workers roll ten of those delicious plant-based burritos every minute. Flor Menjivar, who has worked as a line worker at Amy’s for five years, told Sliced that she has even rolled out 12 burritos a minute. “They make us roll all these burritos to the point where our bodies want to give up because of the pain,” she says.

According to the company’s website, Amy’s has one guiding principle: goodness. That altruistic ethos has come into question this year. Some employees allege that the company’s working conditions are unsafe and they have filed complaints regarding blocked fire exits, worn-out floor mats, faulty machinery, and improper training. The allegations have caused widespread criticism and calls for a boycott of Amy’s products. Here is what you need to know about the boycott of Amy’s Kitchen over alleged labour disputes.

What are the workplace hazard allegations against Amy’s Kitchen?

Amy’s portrays its workers as heroes in a graphic on its Facebook page, but their ‘heroic’ employees are organizing to end what they allege are rapid production speeds they claim have led to injuries, according to a California Division of Occupational Safety and Health (Cal/OSHA) complaint filed by Teamsters in January. The union sent the complaint and adjoining pictures to Sliced. The complaint alleges that Amy’s puts employees at risk by requiring faster production and ignoring safety measures.

Like Menjivar, many of the Santa Rosa, CA facility workers alleging workplace injuries are Latina. Amy’s says that its “family spirit permeates every decision” it makes, but factory workers say that spirit doesn’t extend to them. “If they treated us like family they would listen to us when we complain about our bodies aching because of the speed of the lines. Instead, they tell us to use the parts of our bodies that do not hurt,” Menjivar says. “Lines are very fast and we just continue working in pain.”

She hurt her left shoulder while working and filed a report. “The doctor told me my tendons were swollen and gave me restrictions for work. I was sent to the dining area, but I was still moving my shoulder to clean tables.”

Menjivar believed a colleague was always watching her clean the tables and told the doctor she was fine so she could get back on the lines. “I have to take pills to bear the pain and be able to continue to work. I fear that my injuries will get worse to the point that I will not be able to work and provide for my family,” she says.

Menjivar’s experience is all too familiar for other workers at Amy’s. According to NBC News, Ines De La Luz reported a supervisor made her remove her prescribed arm brace. The Cal/OSHA complaint alleges that when workers raise concerns about safety hazards they are met with hostility. “Workers do not want to speak up because they are afraid of getting fired, especially my older coworkers,” Menjivar says.

In the complaint, Teamsters expressed concern that Amy’s was forcing staffers on the line to work at an untenable increased speed because the company was understaffed. Menjivar shared that workers are expected to assemble 66 plates in 60 seconds, but that often gets bumped up to 70 plates. Cecilia Luna Ojeda, who has worked in the factory for 17 years, told NBC News that production increased from 21,000 to 25,716 plates per eight-and-a-half-hour shift.

The Santa Rosa plant isn’t the only facility to have received complaints from workers. Labour union Unite Here Local 19 filed several unfair labour practice charges with the National Labor Relations Board against Amy’s, alleging that workers at the San José, CA plant were fired for attempting to unionize. NBC News reported that Amy’s has since closed its 65,000-square-foot production facility in San José due to inflation and supply chain disruptions. Workers told NBC News they were given instructions on filing for unemployment or seeking employment at other Amy’s facilities. The alleged hazards include that workers are only able to use the bathroom during lunch and designated break times, there are not enough training periods, and faulty machinery is injuring workers.

What does Amy’s say in response?

Co-founder and CEO Andy Berliner disputes the allegations. He used an Instagram post in March to claim that there are 16 water stations, all fire doors are unlocked, and employees can use the bathroom when they need to at the Santa Rosa plant. The Instagram post continues by saying that the company will invest an additional $50 million in safety-related projects over the next five years. Amy’s also responded to the allegations of unsafe working conditions at the Santa Rosa and San Jose factories with a post on its website echoing a sentiment similar to Berliner’s Instagram post. Amy’s says that the denial of bathroom breaks, union-busting, and a lack of drinking water is completely false.

According to the Vegetarian Times, Berliner has said he would be “happy to meet with any union representative once they earned the right to speak for our employees.” However, Teamsters told Sliced that Berliner has yet to agree to meet.

What about the union efforts?

Some of Amy’s employees have been attempting to form a union since 2021 to guarantee rest periods, fair compensation, minimum staffing levels, safety standards, and health-care benefits. Menjivar joined the unionizing efforts to be part of creating positive changes. “We deserve to work in a safe place, we want to be treated with respect and equality,” she says.

“A union would give Amy’s workers a voice on the job to push back against mistreatment. Union contracts typically include disciplinary procedures that prevent workers from being terminated without just cause,” Matthew McQuaid, communications project manager at Teamsters, says.

In response, Amy’s Kitchen allegedly hired Quest Consulting. “The union-busters told us Amy’s will close and we would get fired if we unionize and that a union is not necessary because we have always been without a union. They scared my coworkers,” Menjivar says. “I would like to say to Andy if it is true that you treat us like family then show it by respecting our rights and letting us form our union without you intimidating us and scaring us.”

Teamsters published a petition requesting Andy Berliner to “immediately dismiss the anti-union consultants you have hired” and “meet with workers in Santa Rosa and their chosen representatives, the Teamsters.”

Has anyone investigated whether the allegations are true?

In January, Teamsters filed a complaint to the Cal/OSHA requesting an inspection, which could result in a fine for Amy’s if violations are found. The company previously had six citations with more than $100,000 fines for OSHA violations. Cal/OSHA has since inspected the Santa Rosa facility but its findings have not been published.

In Berliner’s Instagram letter, he stated that Amy’s conducted an internal third-party audit to investigate the allegations. Amy’s released the findings to The San Francisco Chronicle which published the information. In January, Arche Advisors conducted the audit during an unannounced visit to the Santa Rosa plant. Arche Advisors reviewed injury reports, payroll records, and also interviewed and surveyed employees.

The audit found there was a lack of communication with the plant workers regarding how to anonymously file complaints through a hotline and website and that the information explaining how to raise concerns over issues was only available in English — even though many of the workers only speak Spanish. According to The Chronicle, Amy’s says it has created a training course on how to file grievances.

Amy’s Kitchen recently received B Corp certification, which is a third-party verification of a company’s environmental and social sustainability efforts. In March, Teamsters filed a second complaint against Amy’s, this time asking B Corp to investigate Amy’s to ensure the company meets B Corp's rigorous ethical standards. B Corp hasn’t responded to Teamsters. According to Eater, Amy’s invited B Corp to review the claims.

Who is boycotting Amy’s products?

Teamsters’ representatives; Food Empowerment Project, a vegan food justice organization; and Veggie Mijas, a BIPOC vegan food justice collective, are calling for a boycott to continue until Amy’s addresses the alleged issues. “It is a call of action for the workers’ demands to be met. Amy’s is marketed as a company that carries themselves with love and a family approach, but that is not translated in how Berliner has responded to the reports made by his workers,” says Alejandra Tolley, editorial content manager of Veggie Mijas.

Latina representatives from both organizations attended a rally in Petaluma to stand in solidarity with the workers. “The things they are asking for (fair wages, reliable healthcare, and safe working conditions) are things all of us should have the right to,” Lauren Ornelas, founder of Food Empowerment Project, says. “None of these requests are unreasonable, yet Amy’s management has refused to attempt to address the issues. We will not stop fighting until their needs are met.”

Grocers are pulling Amy’s products from shelves in solidarity with the workers. Worker-owned grocery stores in the Bay Area Mandela Grocery (Oakland, CA) and Other Avenues (San Francisco, CA) pulled Amy’s products. Alberta Co-op and People’s Food Co-op in Portland, OR also removed Amy’s products. Both co-ops left statements where the products were, detailing the call to action and pledging not to resume business with Amy’s until the workers’ demands are met.

Reached by email, Amy’s didn’t respond to a request for Andy Berliner to comment on the allegations.