ISSUE
7
-
War and Conflict
We’re on the brink of global conflict. Could we replace broken food supply chains? 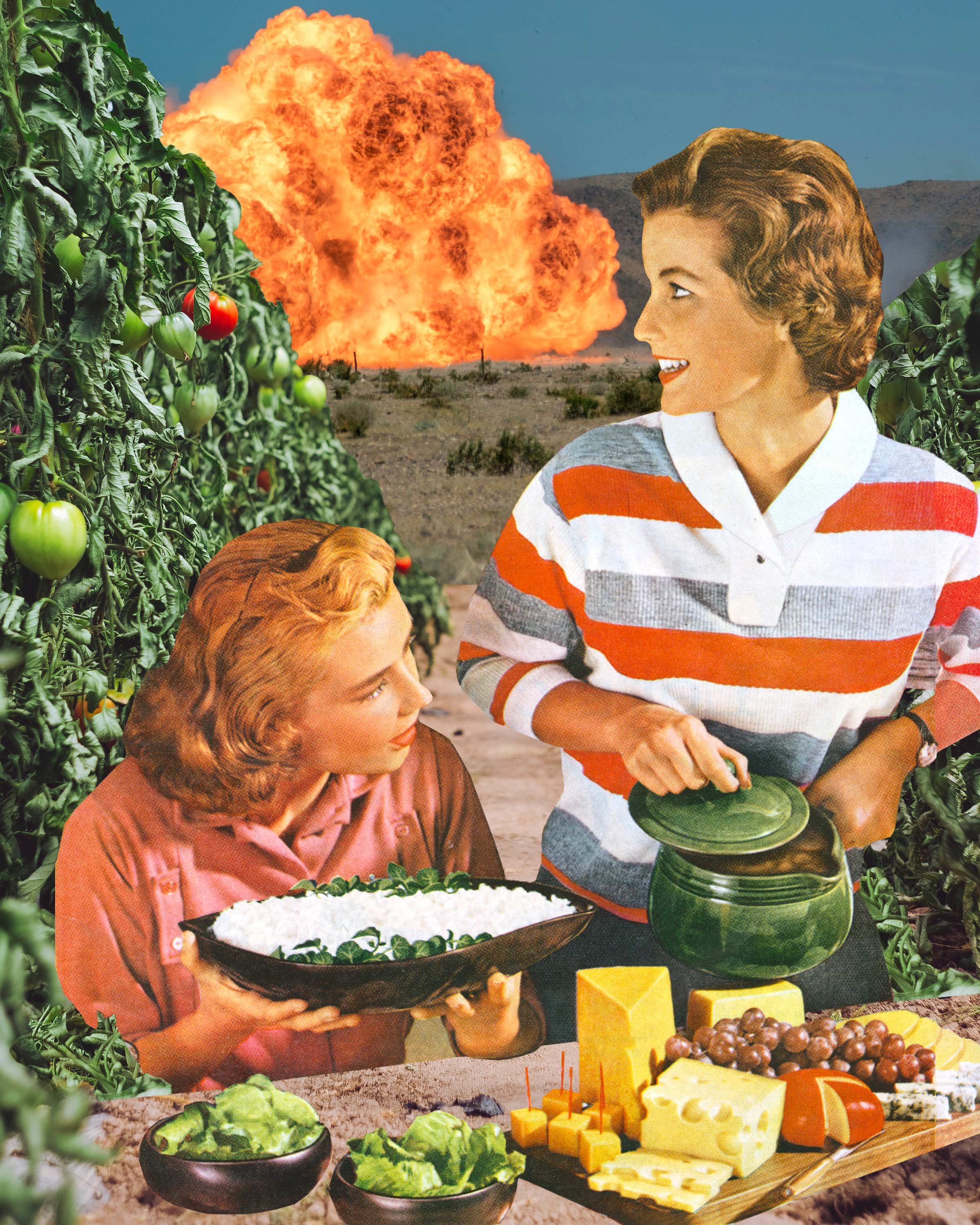 Digital Collage Artist:
Annelise Ferry
WW2 saw ordinary British citizens mobilized to grow food and feed the nation, but decades of industrialization have left us more disconnected from the supply chain than ever
by
Sylvio Martins
3/24/2022

Editor’s note: This article and this issue were commissioned long before Russia’s invasion of Ukraine.

Rationing food would seem stressful to many of us today — particularly those of us who’ve grown up in food security, living with stable food chains. But it wasn’t too long ago that the industrialized world endured extensive rationing, which ultimately required everyday citizens to play a role in the agricultural sector. During WWII, Great Britain enlisted ordinary people in its Victory Gardens program, a symbolic and widely successful program that had Brits growing much of their produce in their own backyards. The determination of the British people, a cultural disposition for gardening and the agricultural literacy of the time played a large role in the program’s overall success. But could we pull off such a feat today?

Since the major conflicts of the 20th century, affluent countries have come to depend on industrialized food chains. Human involvement in the harvesting process has been largely reduced, and we’ve been separated from the processes that provide us with food. As conflict flashpoints heat up across the world — not least the very likely challenge of future climate crisis-induced wars — it’s vital we explore whether we could feed ourselves in the event of a large-scale total war. If our world were to plunge into another global conflict, could we once again transition into a self-sufficient agrarian society?

In 1939, the British ministry of agriculture launched its “Dig For Victory” campaign, which called on everyday citizens to play a fundamental role in the war effort. As well as implementing ration cards and food stamps, the UK government hoped to prevent food shortages and reserve commercial crops for feeding troops overseas. The public’s reaction was largely enthusiastic; the number of allotments reached 1.7 million in just three years and the number of private gardens cultivating vegetable produce rose to five million allotments across Britain. Slogans like “Vegetables for Victory”, “Beans as Bullets”, and “Cloches against Hitler” boosted morale among the British people, who were growing their own fruits and vegetables to feed their families and also to contribute to the war effort. The home garden became a source of national pride and resilience.

Rations came in waves throughout the war. The British government controlled the quantities of staple goods like butter, sugar, and eggs in stores, and fresh produce was only available in limited amounts from commercial suppliers. But even after the Paris Peace Treaties, rationing persisted in Europe, and eastern regions of the continent plunged into deadly famines, leading many nations to turn to a more reliable exporter of goods — the United States. By 1940, the United States’ Congress had passed the Lend-Lease Act, a government-financed export programme for U.S. farmers, that helped fuel the high increase in global demand for U.S. foodstuffs. That same year, the U.S. government began allocating 40% of its research and development funding to agriculture, and farmers were met with the task of achieving higher productivity with less manpower due to the military draft. This moment in history, combined with the innovations of the Green Revolution during the 1950-60s, marked the beginning of the industrialized agriculture sector we see today.

Technology and government subsidies on crops like soy, corn, and wheat have fueled the proliferation of long-lasting processed foods in our grocery stores, which have allowed us to achieve the first food surplus in human history with fewer people involved in the actual harvesting process. These agricultural innovations have weakened the threat war poses to our complex and now globalized food chain, but conflicts, natural disasters and catastrophes can still disrupt food distribution worldwide.

For example, the covid-19 pandemic disrupted supply chains, stimulated demand for food, and led to the highest food prices since July 2014. The climate crisis is causing temperatures to rise, which has led to lower yields of essential crops like maize, the main ingredient in much of the processed foods our society relies on. Droughts, floods, and other natural disasters further disrupt crop yield, while the meat and dairy industries emit enormous amounts of CO2.

In the past three decades, there’s been a cultural shift away from agriculture, with the world population of people working in farming dropping from 44% to 26% between 1991 and 2020. So, contemporary society would have to undergo drastic cultural change to return to our agrarian roots in the event of total war. Not only would the majority of the population have to educate themselves in proper farming practices, but civilians would have to learn how to distribute food supplies within their communities.

Cities and heavily urbanized areas have long been the centres of ideological change in food sourcing and innovation in using public green spaces. Community gardens have proven to be a viable food source helping to combat inequalities during turbulent times. For example, urban farms and community gardens increased by 19% in urban areas after the 2009 global recession, and helped supplement food costs and improve food access for lower-income people. A similar resurgence in self-growing emerged during the covid-19 pandemic, after it was estimated that 41 million Americans faced food insecurity in 2020. Although many community gardens were forced to close or drastically scale back their staff because of social distancing measures, people took matters into their own hands; it is estimated that more than 20 million Americans planted a vegetable garden for the first time during the pandemic.

This sharp increase in demand for seeds led to a national shortage, which then forced community gardens, like The Village in Rochester, Minnesota, to seek out seed and vegetable transplant donations in order to adequately service food-insecure areas. The Trust for Public Land now estimates that, as of 2018, there has been a 44% increase in the number of community gardens in the 100 largest cities in the U.S. since 2012, equating to about 29,000 plots.

So, despite a cultural — and economic shift — away from farming as usual, new forces are demonstrating that we still have the appetite for agricultural literacy. It is a burgeoning agricultural literacy that even those who joined the Victory Gardens program would no doubt recognize.

Just as contemporary community gardens recreate the spirit, bonds and system of the Victory Gardens program, so too are we recognizing the value in community networks to meet each other’s needs. If conflict or widespread catastrophe threatened our current food supply, we’d likely rely heavily on our communities for immediate assistance. The early stages of the covid-19 pandemic gave rise to a massive proliferation of such a system — mutual aid.

Mutual aid is a community-led form of relief, where grassroots networks of volunteers collaborate to make sure everyone’s basic needs are met, and would be vital should a total war or catastrophe wipe out our food supply. Recent examples include community efforts in Minneapolis after the killing of George Floyd and its subsequent protests. Mutual aid came in the form of grocery stockpiles, provided protective gear such as gas masks for protestors, and bail funds for those who were arrested. After the tragic Grenfell Tower fire in the U.K., community members and businesses provided victims with food, donations, and free accommodation. It ultimately sparked a conversation about how these types of grassroots movements can effectively supplement state aid in moments of crisis. Networks of mutual aid would be well placed to assemble in similar ways to manage community gardens and adequately distribute food in times of heightened need. Mutual aid would distribute food to those who aren’t able to access community gardens.

In the event of WW3, mutual aid and community gardens would provide the framework for feeding communities, ready to go and build on when disaster arrives. But what can we do in the meantime, to minimize the risk from large-scale disruption?

One of our best hopes is prioritizing localism in our food supply. Also known as farm-to-table, food localism limits the travel time between harvest and the consumer’s home. Not only does this significantly reduce CO2 emissions from transport, but it promotes a more stable and equitable approach called food sovereignty. It gives people greater autonomy over all aspects of their food supply, and meets people’s rights to healthy and culturally appropriate food produced through sustainable and ecologically sound means. Prioritizing localism and food sovereignty now acts against future large-scale disruption by largely removing the future consequences of a disrupted global supply chain. Even if much of your food is grown at the other end of town, and mutual aid groups can distribute it, you are already protected against the harshest effects of disrupted supply chains. The community garden would essentially become a localist alternative to the modern grocery store.

The world is a very different place to that of Britain’s Victory Gardens. By increasing productivity in the food supply and creating a reliable food surplus in western and developed states, we’ve come to rely on a seemingly autonomous supply chain that stocks our grocery stores.

We may lack the same agricultural literacy as those who took part in the Victory Gardens but that’s not quite the whole story. What we do have is the same instinctive desire to join forces, collaborate, and, most importantly, survive. We may seem a long way from managing the kind of effort achieved in Britain during WW2, but with community gardens and mutual aid, our own forms of community support are emerging. Scientific innovations for seed preservation, urban farming and moves towards farm-to-table localism will better prepare our communities in the event of crisis.

The reality will only become apparent if or when the time comes for each of us to pick up the garden trowel again. But as far away as we are from the Victory Gardens, we’re better equipped to transform our surroundings than we realize.