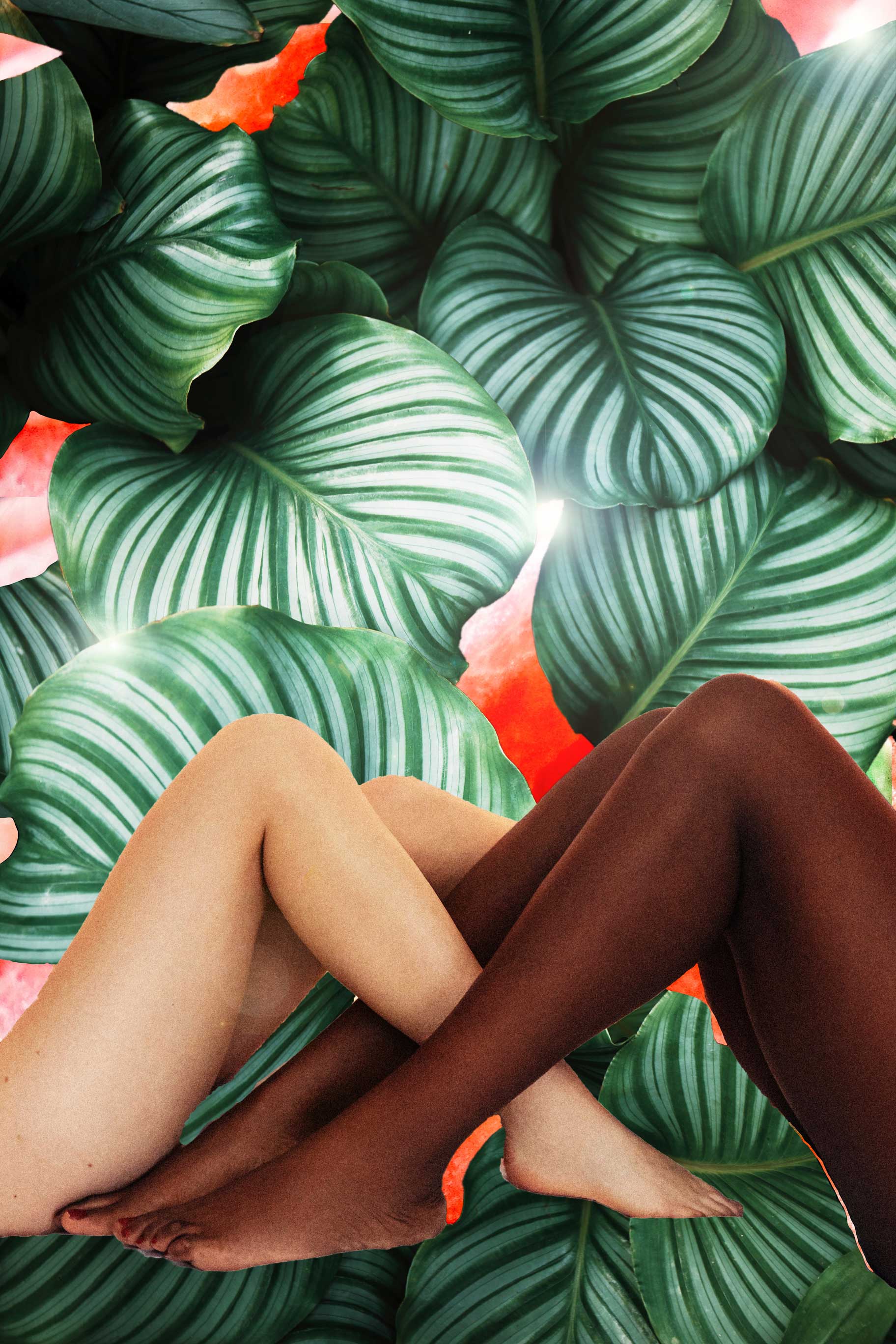 Just over a year ago, Harry Styles released the music video for his pop hit “Watermelon Sugar.” The video, directed by Bradley Bell and Pablo Jones-Soler, opens with yellow text on a black background: “THIS VIDEO IS DEDICATED TO TOUCHING.”

In the next three minutes, it delivers.

Every shot of the video drips with juicy sex appeal as women drape themselves around Styles’s prostrate body and take turns touching, being touched, and eating watermelon in various states of sun-soaked bliss. We don’t know what “Watermelon Sugar” is, but as we watch Harry Styles caress the edge of a watermelon slice with his painted fingertip, we know that we want it.

Watermelon itself evokes the essence of summer: playful, messy, lush, carefree. It reminds us of childhood and an easier pre-pandemic era. The way we eat watermelon—unabashedly face-first, an open-mouth kiss with the fruit of summer—is an intimate experience.

In wider popular culture, watermelon grows on the vine that runs between lighthearted and sexy. It’s hard to escape the captivating rubber bands versus watermelon videos in which elastic bands are stretched around the fruit’s equator until it explodes in a splashy grenade of pink. Beyond the YouTube stage, watermelon is having a moment in the beauty world; brands from Glossier to Essie to Sephora glamorize watermelon as revitalizing, reddening, hydrating, and beauty-enhancing. And sometimes, watermelon represents something overtly sexual, as in Beyonce’s hit “Drunk in Love,” when she croons “I've been drinking watermelon,” which fans have deciphered to mean giving head (and “swallowing the seed”).

But even Styles himself hasn’t defined “Watermelon Sugar” with any clarity. Before performing the song at NPR’s Tiny Desk Concert in March of 2020, Styles spoke about his inspiration: “It’s kind of about that initial euphoria of when you start seeing someone, you start sleeping with someone, just being around someone, and you have that excitement about them.” Styles teases us with the inklings of a definition, but he won’t spell it out.

When Zane Lowe interviewed Styles about his album Fine Line, on which “Watermelon Sugar” appears, Lowe remarked, “Everyone's kinda figured out what [“Watermelon Sugar”] is about: the joys of mutually appreciated oral pleasure." Styles responded coyly: “Is that what it’s about? I don’t know.”

Fans scrutinized clues in the lyrics—“It’s so wonderful and warm,” “I want your belly/And that summer feelin',” “I just wanna taste it/I just wanna taste it”—and contributed a deluge of definitions. The insatiable desire to define “Watermelon Sugar'' has kept it in the top trending spot on Urban Dictionary, nearly two years since the release of Styles’s album Fine Line.

Styles won't sell the secret of “Watermelon Sugar,” but he is exceptionally good at selling desire itself.

The “Watermelon Sugar” video is ripe with everything we couldn’t have at the time of its release on May 18, 2020: touching. Our skin was literally starved of human contact. Heeding stay-at-home orders, we stopped shaking hands, brushing by one another on public transport, hugging goodbye, kissing, cuddling, tousling, having sex.

All forms of closeness evaporated. In viewing a video depicting a jubilant experience we weren’t allowed to participate in, I felt a pang of jealousy and a rush of desire. I wanted it.

But ‘it’ was more precise than just touching. “Watermelon Sugar” modeled uninhibited, emotional intimacy. It wasn’t just touching that felt good—it was the closeness we’ve been denied during the pandemic.

A year since the release of the video, we’re now teetering on the edge of what some are calling the “Hot Vax Summer.” Others are calling the now-unfolding decade the New Roaring Twenties and predicting a rise in “sexual licentiousness”, similar to that which occurred in the Roaring 20s following the 1918 influenza epidemic.

As restrictions relax and anticipation mounts, we’ll find ourselves in new close spaces. But even once we’re able to reconnect with each other, unmasked and within six feet, I doubt we’ll pursue the one-night stands and casual sex that characterized the pre-pandemic era to the same degree.

Hookup culture is characterized by the pursuit of pursuit, rather than the pursuit of pleasure. When encounters are viewed as fleeting and temporary, people tend to put forward less investment, and all of the many rewards that can come from communication, authenticity, and intimacy are lost. Moreover, the risk of COVID-19 transmission has made us more cautious about casual sex. For many of us, what we’re craving the most is connection.

“Watermelon Sugar” offers that alternative. On a superficial level, the song and accompanying music video may appear to promote no-strings-attached free love and carefree promiscuity. But if we look a level deeper, “Watermelon Sugar” expresses the shared, buoyant pleasure of everyone involved. This dynamic mirrors the watermelon—a fruit often dismissed for its shallow nutritional qualities, but which means far more to us as a social food we share with people who matter.

During the shoot, every interaction between Styles and the models was prefaced by permission and comfort. Styles ditched a script that positions him as the initiator of all touching. The video echoes the energy of the watermelon—the juicy, oversized fruit is asking to be sliced into wedges and shared. And the pleasure the fruit elicits belongs to us all.

The watermelon could have been a prop for Styles to centre his own pleasure or flex that he eats women out. It could have been a flat symbol for genitalia that does no work to promote sexual agency. Instead, Styles uses the watermelon to highlight the experiences of his partners’ pleasure and joy, aided by our attachment to the watermelon as playful yet voluptuous. After each shot of Styles burying his face in the fruit’s dripping red flesh, the camera cuts to one of the women in mid-euphoric sigh or enraptured expression of bliss.

The video humanizes rather than objectifies the models, and the viewer is immersed in their ecstasy in its purest form. They are not performing for Styles, but acting on their own urges and exhilaration. They are agents of their sexuality and desire, not props.

A script of enthusiastic consent shouldn’t be revolutionary. By dubbing Styles Consent King, we’re praising him for doing the bare minimum: Consent should be non-negotiable. But, reaffirming consent as mandatory, for sex and for any kind of touching—perhaps all human interaction—may show us the way to healthier, happier, sexier experiences.

This is exactly what we’ve had to do throughout the pandemic: gauge the comfort of those around us and adjust our behaviour. In a range of intimate settings—dating, visiting family, hanging out with friends, going into work—we’ve asked each other what feels good (especially when we lacked clear guidance).

As we emerge from more than a year of keeping our hands to ourselves, we will be the ones to collectively decide the rules of engagement for touching, just as we crowdsourced the meaning of “Watermelon Sugar” when Styles wouldn’t (or couldn’t) define it.

We have an opportunity to redefine our post-pandemic society, including how we prioritize the comfort and pleasure of those around us. That feels like an electric, elated connection. It sounds like curious questions and honest answers. It tastes like strawberries on a summer evening.