ISSUE
10
-
The Mekong Delta: Is Vietnam’s rice bowl about to tip over? 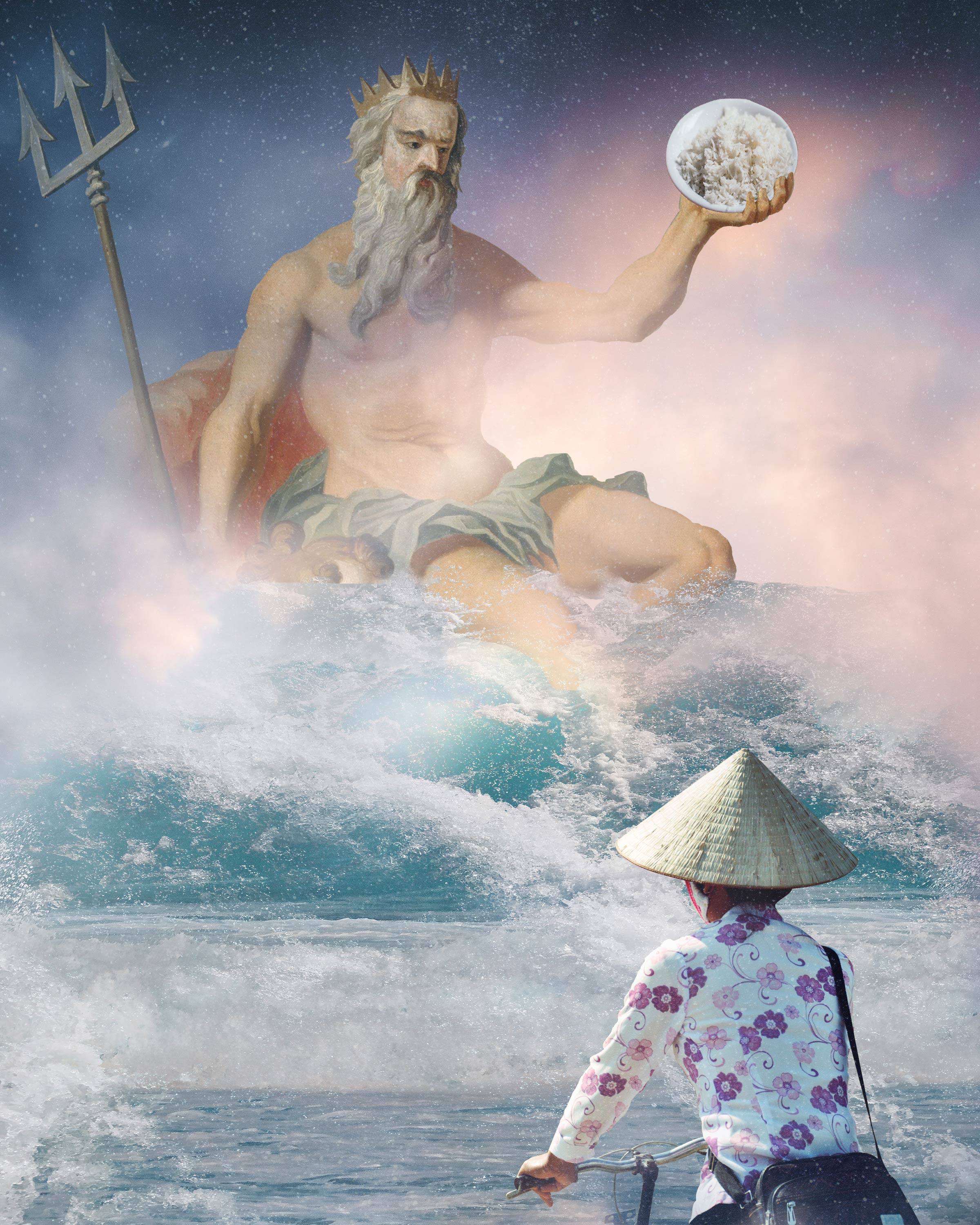 Digital Collage Artist:
The vast rural region has long supplied the country with its staple food and key export crop, but the climate crisis is putting that in serious danger
by
Peter Cowan
7/14/2022

It’s hard to overestimate the importance of Vietnam’s Mekong Delta to the country’s diet.

The densely populated rural region, which is home to more than 21 million of the country’s roughly 100 million population, is known as Vietnam’s rice bowl for good reason.

Each crop year, Mekong Delta rice farms produce about 25m tonnes of the grain to feed the country and for exports worth US$3.3bn in 2021.

Yet all that could change within a generation.

With much of the Delta a mere two metres above sea level, rising sea levels driven by an increase in global temperatures could have a disastrous impact on all aspects of life, none more so than farming.

According to projections for the end of this century, rises in sea levels could put large swathes of the Delta underwater, while land subsistence is also a growing concern, with “rates up to 5-6 cm a year” according to academics at Wageningen University in the Netherlands.

In addition, saline intrusion — which occurs when salty seawater seeps into the freshwater needed to grow rice — is already affecting the region.

Add it all up and it becomes clear that Vietnam’s rice bowl is very much in danger of tipping over.

Beyond filling millions of bellies every day in Vietnam, rice also plays an outsized role in Vietnam’s culture.

The Vietnamese language has no fewer than ten different words for the grain and it features heavily in virtually every family’s regular meals.

One of the words for rice, cơm, is even used as a synonym for meals in general. One of the most common greetings in Vietnamese is “Bạn ăn cơm chưa?” which literally means, “have you eaten rice yet?” but is closer in meaning to “How are you?”

But rice looms large in the Vietnamese psyche because of the country’s relatively recent hunger crisis.

"Those who were born and raised in Hà Nội during a subsidy period probably have unforgettable memories of that time."

After the American War ended in 1975, Vietnam entered what is now known in the country as the ‘Subsidy Period’, which ran until the Doi Moi economic reforms of 1986.

The ravages of war, sanctions and missteps in central economic planning led to food shortages that have imprinted themselves on the memories of those who went through them.

“’Those who were born and raised in Hà Nội during a subsidy period probably have unforgettable memories of that time,’” the organizer of an art exhibition on the period told state-run newspaper Viet Nam News.

“’It is a time of hardship in history. Life was difficult due to a sluggish and inefficient production system. All essentials of life were provided in a very limited quantity,’” she added.

Even today, restaurants like State-Run Food Shop 37 pay homage to the period.

The impact of the period on Vietnam’s relationship with rice is clear today, when at the onset of the Covid-19 pandemic, the finance ministry proposed suspending rice exports to ensure national reserves stayed full.

Scientists from Wageningen University have been researching the Mekong Delta for decades and have made some pretty dire predictions in recent years.

While some models predict that large parts of the Mekong Delta will be underwater by the end of the century, the Dutch researchers say that could be the case within ten to 20 years.

“Land subsidence in a delta is a natural process, but in recent decades the delta has been sinking faster due to increasing human activities, such as excessive groundwater extraction. Large parts are subsiding ten to 20 times faster than [the] sea level is rising,” according to Philip Minderhoud, assistant professor at Wageningen University and Research.

“In addition, we have recently discovered that the Delta is much lower elevated above sea level than previously thought,” he added.

“The delta should no longer be Vietnam's rice bowl: it should be its food basket.”

Other academics are also sounding the alarm over saline intrusion.

Writing for The Conversation, a group of European and Vietnamese academics estimate that in a worst-case scenario, 10% of the current winter-spring rice farming area could be rendered unusable by the middle of this century due to saltwater intrusion.

According to Gerardo van Halsema of Wageningen University, the solution moving forward should be one of adaptation rather than fighting rising sea levels by raising the height of dikes, as Vietnam has long done.

“’Constantly raising the height of your dikes is pointless. It’s better to give the Mekong enough space and use the surrounding land for whatever you can grow there. We tried to demonstrate that in the Mekong Delta Plan (2013, jointly with the Dutch embassy in Vietnam, Deltares and Royal HaskoningDHV – ed.), funded by the Netherlands Enterprise Agency (RVO) and the Partners for Water programme. The World Bank approved $300m to implement this,’” he said.

The national government is well aware of the need to act and in 2017 issued a resolution to ensure the “climate-resilient development of the Mekong Delta”.

Yet the Dutch academics say stronger action is needed. They believe the Delta should soon cease to be the country’s rice bowl. Instead, they say Vietnam needs to diversify crops and encourage husbandry there.

“’The main objective for Vietnam is to ensure that the Mekong Delta is a rich food production region,’” said Jan Verhagen. “’The delta should no longer be Vietnam's rice bowl: it should be its food basket.’”

If the Mekong Delta ceases to be Vietnam’s rice bowl and does indeed become a food basket, what will Vietnamese farmers shift their focus to?

Aquaculture is one part of the researchers’ and Vietnamese government’s plans for the Delta, and growing shrimp would provide a double benefit, according to van Halsema.

“‘There’s a lot of enthusiasm for shrimp and they fetch a high price. And if you cultivate them in mangrove forests, you also protect the coastline,’” he says.

It’s not just shrimp that forms part of the transition, though. In one World Bank project, a farmer was provided funding to switch from focusing on rice farming to a hybrid duck-fish crop model. According to the World Bank, his potential profits per hectare doubled.

Government efforts have also focused on simply reducing the intensity of rice farming. A government resolution issued in 2016 on ‘sustainable and climate-resilient development of the Mekong Delta’ has changed the focus of farming from “from a cycle of rice–other crops–aquaculture to fisheries–other crops–rice”, according to the Heinrich Boll Foundation.

That previous cycle of rice–other crops–aquaculture often included up to three rice harvests a year, an intensive farming cycle that while necessary after the American War, has contributed to subsidence in the Mekong Delta, according to the Dutch researchers, who wrote:

“Between 1975 and 1995, Vietnam shot up to become the second-largest rice producer in the world, after Thailand. But sooner or later,” says van Halsema, “intensive agriculture in a delta will lead to subsidence and salinisation, as the Netherlands knows only too well.”

As for the effect on the Vietnamese diet, with the country still able to produce comfortably more rice than is needed for domestic consumption, gradual changes in crop structure will have far less impact on the average dinner plate than ecological catastrophe.

The national government continues to make all the right noises about helping the farmers in the Mekong Delta adapt to the climate crisis, however the disparate and disjointed nature of the Vietnamese political system makes translating national policy into local outcomes tricky.

The other reality to acknowledge is that Vietnam can’t slow rising sea levels on its own; the climate emergency is a global issue. The country’s leadership has been vocal about doing its part, yet it is still largely dependent on coal power.

In addition, the Mekong River flows through China, Myanmar, Laos, Thailand, and Cambodia before reaching Vietnam, and the country has little power over the dams those countries build on the river.

Whichever way you slice it, the future looks precarious for Vietnam’s rice bowl.