ISSUE
-
Fire
The Meat Factory Is On Fire – Again 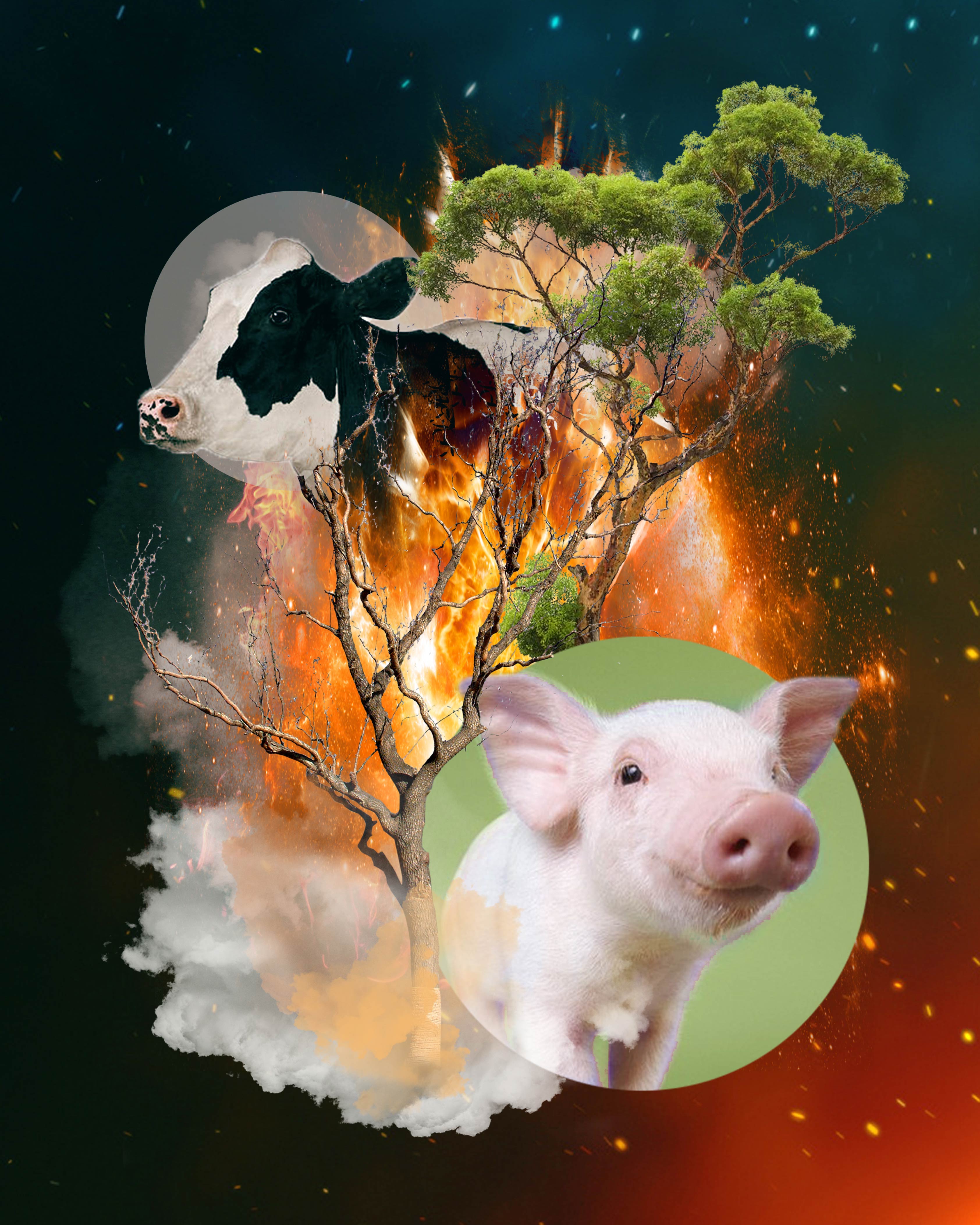 Digital Collage Artist:
Anastasiia Standret
While researching this issue’s theme, Fire, Sliced discovered more than 30 fires that have broken out in meat factories and processing plants, most of which have occurred in the past few years in the United States, but also in Canada, the UK and further afield.
by
Dan Morrison
7/15/2021

In the meat industry, a fire is never too far away.

A Greenpeace International report from March 2021 found that 30 percent of the Brazilian Pantanal, the world’s largest contiguous wetland, burned. The cause? Ranchers deliberately setting fires—ranchers who then sold their slaughtered cattle to the world’s food giants. Huge firms such as McDonald’s, Burger King and more all bought meat from Brazilian firms heavily linked to the fires.

In December 2019, reporting by the Guardian and the Bureau of Investigative Journalism (BIJ) found that fires in the Amazon were three times more likely in beef-producing zones. Seventy-percent of NASA’s fire alerts in the Amazon came from beef buying zones, even though the region covers less than half of the legal Amazon.

These reports underline the links between the Brazilian meat industry and Amazonian deforestation and environmental degradation, and highlight a deadly truth about our meat habit. Destructive fires are a part of the game. And outside of the Amazon, they’re blazing away with relatively little notice.

Around the same time as the Guardian and BIJ report was published, Tyson Foods was re-opening its Holcomb, Kansas plant. The meat processing facility had closed in August 2019 after a fire ripped through part of the building, leaving 3,800 staff members out of work.

In the same month as Greenpeace’s groundbreaking report was released, a meat processing plant in Clay Center, Kansas was described as a “total loss” after a fire gutted the building. A large explosion blew out the facility’s front windows 30 minutes after fire crews arrived, leaving debris scattered across the road.

In the month after the report, another Tyson Foods plant was engulfed in flames in Robards, Kentucky. In the month before the report, a fire also broke out in a South Carolina meatpacking facility. And in the month before that the Deli Star Corp. plant in Fayetteville, Illinois was obliterated in a fire so destructive firefighters had to pump water from the Kaskaskia River just to keep it under control.

In fact, while researching this issue’s theme, Fire, Sliced discovered more than 30 fires that have broken out in meat factories and processing plants, most of which have occurred in the past few years in the United States, but also in Canada, the UK and further afield.

Blazes large and small have ripped through these facilities, causing temporary shutterings, permanent closures and millions of dollars in damage. While many plants were already up and running the same day as their fire, the December 2017 fire at the Paletta International building in Burlington, Ontario is believed to have caused up to $10-million worth of damage.

Employees have been laid off work for extended periods of time—in some cases with pay, but in others permanently—and been injured during blazes. An October 2020 fire at a meat processing facility in Tremonton, Utah injured three employees (and caused US$1.5 million in damage). That same month, 10 workers at an Egyptian meat factory suffered severe burns that put them in hospital in critical condition, while dozens more suffered smoke inhalation.

What’s striking about the fires isn’t just that they seem to occur disproportionately frequently, but that they occur at such a rate without any obvious common links or causes between them. A meat factory in Norwood, Massachusetts was set alight in February of this year by a grease fire in an industrial oven. A fire at another Tyson Foods plant in July 2020 started in a boiler room, and it was a mechanical failure that started the blaze at another Tyson Foods facility in Salt Lake, Iowa.

From the source to the processing plant, fires line the way. But what’s going on in the Amazon is much clearer than in our factories. Fires of various scales have broken out but they’re receiving scant attention.

A Google search produces little more than these stories of meat factory fires. There are no clearly available statistics on fires in meat processing plants, and few food industry experts are talking about it. More than 10 experts and advocates for working conditions in the meat industry were contacted for this article, but few were able to speak to the issue of meat factory fires. Those that replied warmly apologized that they didn’t know much, and recommended other resources and experts to speak to.

Campaigns to reform the meat industry and reduce our meat intake are powerful and vocal, dominated by ethical questions about eating animals and concerns over the industry’s contribution to the climate crisis and environmental destruction. While the industry’s deliberate fires gain important and much-needed coverage, the blazes breaking out on the supply side are flying under the radar.

The COVID-19 pandemic has brought greater scrutiny to bear on working conditions in meat processing facilities. Plants in the United States have been the sites of mass outbreaks, while the government pressed the industry to open back up. Hundreds of meat industry workers have died from COVID-19 and tens of thousands contracted the coronavirus, but this wasn’t the beginning of the problem. Oxfam America’s Lives On The Line report detailed the dangers poultry workers face every day, including repetitive strain injuries, not being allowed to go to the bathroom, the risk of maiming, respiratory hazards, and exposure to dangerous chemicals.

A 2017 Monthly Labor Review for U.S. Bureau Of Labor Statistics found that those working in animal slaughtering and processing have a higher incidence rate of injuries than the average for private industry workers. The American Bureau of Labor Statistics for 2019 show that workers in meat processing plants experience a higher rate of injury than the average for manufacturing. For rendering and meat byproduct processing, that figure is nearly double the manufacturing rate.

While workers may suffer in these conditions, including at the risk of fire, the industry continues to thrive. The fire at Tyson Foods’s (that name again) plant in Holcomb in August 2019 underscores this clearly.

U.S. beef processors such as Tyson, Cargill and JBS USA all enjoyed record highs on their profit margins following the fire in Holcomb, rising to $344 per head after the fire from $153 per head the week before the fire. Tyson was able to maintain a full supply chain by shifting production to other plants and opening Saturday shifts. In fact, a United States Department of Agriculture (USDA) investigation found that the move to Saturday production shifts increased slaughter capacity by 21,000. The USDA report said “the total number of fed cattle harvested during the first three post-fire weeks actually outpaced that of the three weeks prior to the fire by approximately 5,000 head.”

What these fires mean is as opaque as it is transparent. On the one hand, they regularly break out at facilities, but garner no coverage beyond initial reporting. Experts and advocates can’t speak to the issue, and the industry thrives while they burn. The blazes share few common details.

But, they do happen. That fires can rage so frequently with few commonalities underscores the risks meat industry workers face, but it’s unclear the extent to which a lack of regulation, lax regulation enforcement, or conditions in the plants themselves are to blame.

You can follow the fires from the source to the processors. Just as they continue to burn in the Amazon, so too are they not going out in factories. This past December, Tyson Foods (again) was forced to reiterate its safety policy after the mother of one of its workers expressed concern for her daughter’s safety, citing “multiple fires at the plant”. (Sliced was unable to corroborate these fires at the time of writing.) A plant in Corpus Christi, Texas experienced two fires, first in 2016 and then again in 2021.

The meat industry’s fires aren’t going to burn themselves out. But at least by knowing they’re happening, we might stop them from starting in the first place.