ISSUE
5
-
Fungus
The intelligent fungi that can revolutionize agriculture 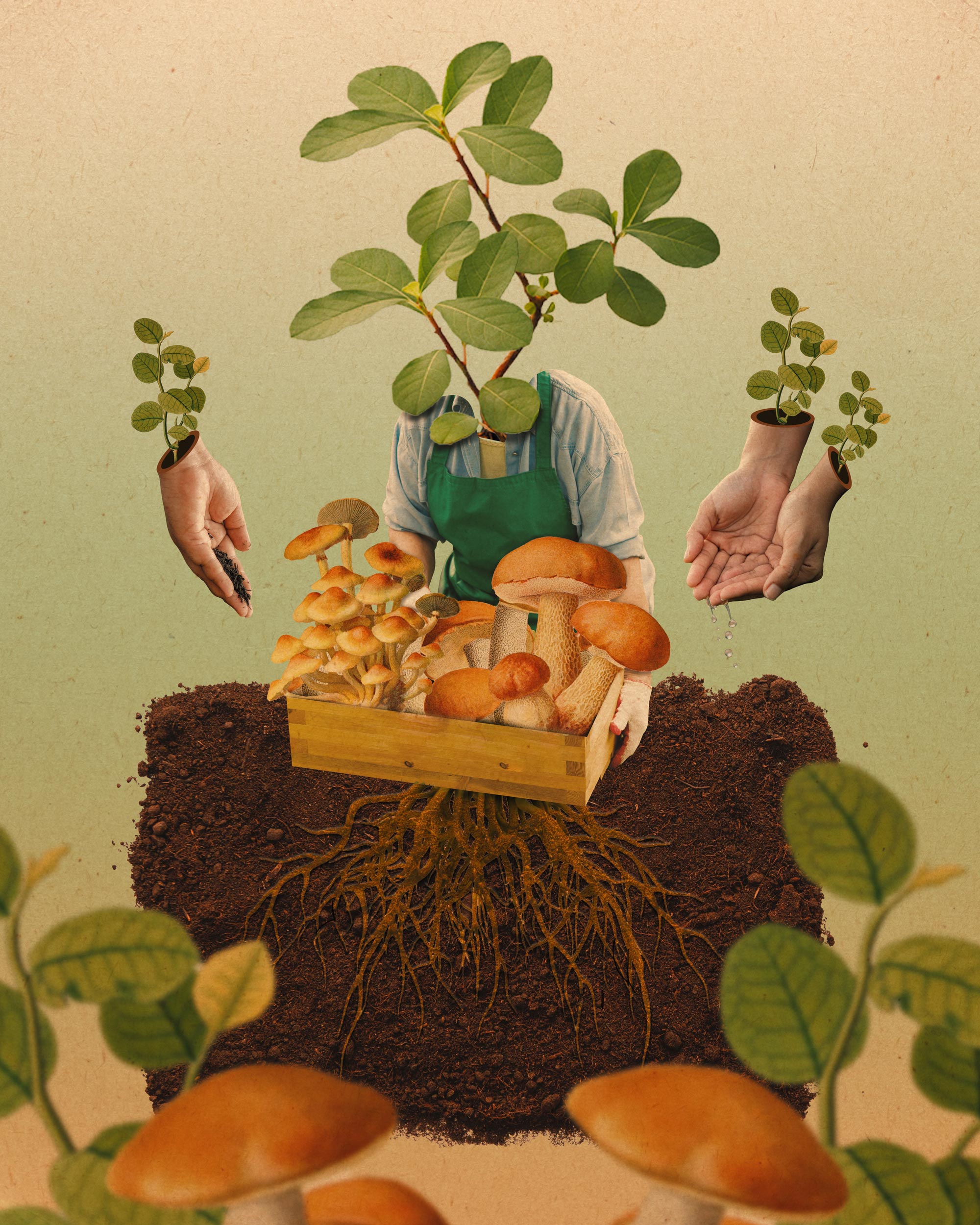 At the time of writing, the world is grappling with an unprecedented pandemic, so the health of the earth and its people weigh heavy on the mind. The major agents of pollution should be known to all by now: an over-reliance on fossil fuels, deforestation, and agriculture, among others.
‍

Yet, instead of turning to despair, scientists, activists, and sustainability experts have found solutions in unexpected avenues. When it comes to agriculture, mycologists and farmers have found a way to make the practice more sustainable, simply by turning to a tool offered by the earth.
‍

This innovation comes by way of mycorrhizal fungi. Although the Greek origins of the word mycorrhiza (mykos for fungus and riza for root) seem to imply a simple root system similar to that of plants, the actual function of mycorrhiza is much more complex. Mycorrhizal fungi is not merely a root system, it is a complex underground network of fungal fibres that offers a channel of communication for different species of plants. They don’t merely connect birches to birches and elms to elms; this network propagates a sophisticated connection that allows plants to be warned of diseases plaguing other satellite plants in their network and subsequently protect themselves.

While explaining the intricacies of this kind of fungi, Jean-Marc Moncalvo, curator at the Royal Ontario Museum and ecology professor at the University of Toronto, remarked that plants tend to employ systems of protection against diseases that are not harming them but are targeting other trees in their forest, suggesting that they were warned of the imminent threat.

But it is not only the plants that benefit from joining a mycorrhizal network. In his book Entangled Life, biologist Merlin Sheldrake—who is at the forefront of mycorrhizal research—writes: “Plants must admit into their roots the fungal species that will form a mutually beneficial relationship, as opposed to the many that will cause diseases.”

Moncalvo elaborates on the mutual partnership between the plants and the fungi: plants require water and micronutrients such as nitrogen and potassium, while fungi need sugar. The hyphae—the thin threads of fungi that connect to a plant’s root system—can be one hundred times longer than the root hairs, allowing them better access to key nutrients. By forming a mycorrhizal network, both parties are able to receive what they need in order to thrive or, in more dire instances, survive.

And this astounding network could be used in agriculture to ensure both the production of healthier crops and the reduction of artificial fertilizers.
‍

Several studies have been conducted over the past couple of decades to further analyze the benefits that could be achieved by using mycorrhizae in agriculture. One such study, conducted almost forty years ago in 1984 by Peterson et al., confirmed that mycorrhizal fungi increases plants’ ability to absorb the key nutrient phosphorus. The study differentiates between two kinds of mycorrhizal fungi: Vesicular-arbuscular mycorrhizae (AM) and ectomycorrhizae. The latter is found in tropical and temperate trees, while the former is found in almost 90 percent of vascular plants; seed-containing or flowering plants such as herbs and vegetables. And so it is specifically AM that is the focus of researchers.
‍

More recent studies have confirmed these findings: one 2008 study found that strawberry plants that connected to a mycorrhizal network produced 17 percent more berries than their solitary counterparts, while, five years earlier, a 2003 study found that peppers yielded 23 percent more fruit after being inoculated with the fungi.

A more recent project, conducted in 2010 by Molly Lohman, Christine Ziegler-Ulsh, and David Douds, of the Rodale Institute, found further benefits of using AM in farming and gardening. When used in farming soil, they found that plants were able to reach zinc and copper in addition to phosphorus, all of which are considered immobile nutrients and difficult to access. And while they found that both inoculating AM and cultivating the AM spores already in the soil increased the yields of several different plants, they determined that the price of this inoculum, in addition to the shipping and handling, would be significant, particularly for large commercial farms.

Despite its cost, farmers around the world should consider using AM to cultivate their crops for a very important reason: it is better for the environment than competing fertilizers.

Although they help farmers produce large crop yields, fertilizers have long been known to harm the environment surrounding the soil where they are introduced. From the soil, chemical fertilizers are able to contaminate water sources and, through evaporation, enter the atmosphere as harmful greenhouse gases. The United States Environmental Protection Agency labelled this water contamination as one of the most urgent environmental challenges in the present day.
‍

But while it feels as though there is a solution to the expansive use of chemical fertilizer right before us, packaged neatly in fungal thread, any kind of transition—whether partial or complete —to this kind of natural fertilizer will take time and will prove to be difficult. We can observe an example of this in Sri Lanka which, this past April, passed an immediate, all-encompassing ban on chemical fertilizers, urging farmers to use organic methods of maintaining their soil and crop. It takes at least two years to rebuild the microbial makeup of soil that, before, was accustomed to receiving fertilizer. Sri Lankan farmers suffered a decrease in crop yield immediately after the ban (mainly in tea, which is Sri Lanka’s most booming industry), which led to serious economic crises. Because of this, Sri Lanka reversed the ban this past August, only five months after the ban was enacted.

This saga confirms two notions: first, that important people are recognizing the harm of chemical fertilizers (two thirds of Sri Lankan farmers surveyed were welcoming of a shift to organic methods of fertilization) and second, that a transition would require meticulous and thorough planning on the part of scientists, farmers, and legislators.

There is no question that practices will have to change within the coming decades—both in agriculture and in day-to-day life—in attempts to mitigate the climate crisis. For farmers, there is incentive to find ways of reducing environmental harm in the fact that the effects of the climate emergency—floods, droughts, even increased rainfall—can harm crop yield and impede entire production seasons.

Several commercial mycorrhizal inoculants have entered the market, with Dynomyco, an Israeli company spearheading the production of inoculants to improve and increase marijuana yield, set to enter the United States through a distribution deal with GrowGeneration Corp. It is already offered in Canada. Pro-Mix is also offered in Canada, a mycorrhizae-growing product geared towards home gardeners. The secrets of mycorrhizae are staking their claim in the agriculture industry: from cannabis to produce, and commercial farm to home garden.

Different industries and institutions worldwide have been reckoning with the effects of a changing climate. As scientists produce concerning prognoses for the state of our world, agriculture will most certainly face a restructuring; Sri Lanka attempted a radical change that ultimately failed, but, hopefully, governments that follow suit will offer more supportive transition plans. Fungi could be a vital tool for farmers for the rest of this century; they just need a viable transition plan.