No items found.
Product is not available in this quantity.
The Orange
The Bitter Aftertaste of Waste
The cost of the citrus-infused beverage industry.
Lindsay Spielman
12/15/2017 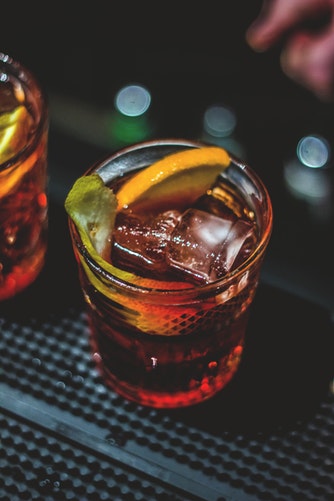 Any bartender will tell you, the real cherry on top of this classic cocktail isn’t the maraschino; the presence of the orange slice is what gives the Old Fashioned its characteristic lure. Yet, what is not quite as alluring is the bitter reality of food waste that can be attributed to the citrus-infused beverage industry.

The Old Fashioned isn’t the only choice holiday cocktail to employ the essence of orange to entice patrons. The options of orange-infused bar beverages are ever increasing. From Grand Marnier to Blue Moon’s Sunshine Citrus Blonde to spiced mulled wine, the aroma and zest of the orange is omnipresent.

The accumulation of food waste in the bar industry is only the tip of the iceberg of a major global food waste problem that is currently mounting.

However, the appearance and proliferation of these citrus-infused beverages come at a cost, a cost far greater than the $13 per cocktail that one can be expected to pay at the bar. The production of many of these beverages utilize only a small portion of the orange fruit – often just the peel. In several cases, the remaining portion of the fruit is discarded. Several interviews conducted with bartenders and serving staff from a variety of establishments, including popular modern taverns in Surrey, contemporary chain restaurants scattered throughout the Fraser Valley, upscale golf clubs in Harrison, and even five star resorts in the Okanagan, revealed that fruit waste in the beverage industry is rampant. Once a fruit has been peeled a couple of times to make a few beverage twists, it is then decided that the produce is too ugly and too handled to be used in other beverage products. So, these skinned fruits more often than not end up in the waste basket. But that’s not where the fruit waste ends in the bar industry, citrus wedges lingering in the bottom of a short bar tumbler often get tossed out with the ice and the straw, while misshapen, off-coloured or bruised fruits often don’t get utilized at all. The accumulation of food waste in the bar industry is only the tip of the iceberg of a major global food waste problem that is currently mounting.

A report put out by the Food and Agriculture Organization of the United Nations in 2015, highlighted that of the approximately 121 million tons of citrus fruit produced each year, oranges account for over 68 million tons of those juicy pulpy delights. In 2016, Canada imported 195 thousand tons of oranges, many of which are destined to end up in the landfill. It’s been calculated that in Canada, a catastrophic 31 billion dollars’ worth of food is wasted each year. Of this nation-wide food waste epidemic, 9 per cent of the waste is as a result of restaurant and hotel operations, which accounts for nearly 3 billion dollars of our national food waste problem.

Although it may seem somewhat insignificant to fuss about a few oranges, limes and lemons that are tossed out the back of the bar after the peel has been removed, these discarded fruits rapidly add up. A quick Yelp search revealed that there are currently 2341 ‘bars’ in the city of Vancouver. If only 3 fruits are tossed out per bar in Vancouver each night, that quickly mounts to over 7,000 whole fruits tossed everyday, and over 2.5 million fruits castoff each year. The implications of bar waste are calamitous.

Of this nation-wide food waste epidemic, 9 per cent of the waste is as a result of restaurant and hotel operations, which accounts for nearly 3 billion dollars of our national food waste problem.

However, it’s hard to make a sidecar without the citrus twist, and it’s somewhat challenging to ask people to give up their Friday night ritualistic vice. So, what’s a reasonable means to resolve this problem?

A few forward-thinking establishments have adopted some highly innovative and globally-responsible beverage practices that minimize the food waste issue by introducing the idea of the zero-waste cocktail. This novel, and rapidly growing concept, is gaining great traction worldwide.

A movement by the name of Tiki Trash has been taking the world on one trash can at a time. Their aim: “raise awareness and more importantly, solutions to the insane amounts of waste the food and drink industry is producing every year … fuck that – every night!” This fully online, open and rather risque platform, founded by Kelsey Ramage and Iain Griffiths, provides practical ideas and solutions for creating a more sustainable bar culture. Inventive trash can recipes primarily utilize fruit ‘waste’ to create delicious and inventive recipes. Their signature drinks, which include the Watermelon Rind Cordial, Missionary Momos, and A Stripper Named Michelle, make use of everything from lime husks, to bruised peaches, and second round coffee to make delectable beverages out of what would typically be considered waste. The Tiki Trash O&B Orange Curacao [Wip], for example, uses boiled orange husks to produce a sweet and delectable orange stock. The orange stock is then combined with vodka and Cognac to construct a holiday libation.

This sustainable sipping bar concept has been adopted by a number of Vancouver area establishments. The Diced Pineapple Cocktail is a zero-waste drink that is served up at the Royal Dinette on Dunsmuir street. The drink uses all of the pineapple parts: skin, pulp, and greens. This eco-conscious beverage was created by the bar manager, Kaitlyn Stewart, and helped her succeed as the 2017 Diageo World Class Bartender of the Year, the ‘largest and most reputable cocktail competition in the world’. 2017’s challenge was to create the ultimate green cocktail.

In an interview with Sliced, Kaitlyn Stewart said she created the cocktail in an effort to showcase how food waste can be minimized through education. Accordingly, the Diced Pineapple Cocktail beverage demonstrates how fruit shelf life can be extended and how fresh fruit can be used to its full potential.

Yet, the green efforts at the Royal Dinette don’t start and end with this single cocktail. Stewart said that flavouring syrups are created using the leftover pulp from juicing while oleo-saccharums are crafted from fruit peels before the juicing process. Ugly fruit is also put to good use in the production of meads and shrubs. At the end of all of the beverage preparation, if any fruit portions do remain unused, they are composted.

The Royal Dinette isn’t the only local establishment tackling the issue of fruit waste in the food and beverage industry. Other eco-friendly liquor-serving establishments including Vancouver’s Lavish Liquid, Forage, and Grapes & Soda have joined the green movement.

Ethically minded consumers also continue to put pressure on other establishments in the bar industry to adopt similar practices.

Therefore, the efforts of this green movement should not rest solely on the shoulders of forward-thinking bar management and restaurant owners.

But what is the leading influence behind the adoption of such practices in the food and beverage industry? And what can help further progress this movement?

A study conducted by a group of researchers in Finland in 2015 highlighted that there are many factors that influence the generation of food waste in the hospitality industry. This study discovered that the experience and skills of the staff, as well as the type and quality of the meals created, had a significant impact in minimizing avoidable food waste. However, they were also able to determine that several interrelated factors, such as societies views on food waste, legislation, overall business concept, management style, business competition, and communication / advertisement had an indirect impact on the production of food waste. Therefore, the efforts of this green movement should not rest solely on the shoulders of forward-thinking bar management and restaurant owners: more rigorous legislation should also be put into place to encourage restaurants to employ more rigorous sustainability practices.