ISSUE
7
-
War and Conflict
The climate crisis conflicts are here, and they’re driving malnutrition in Kenya 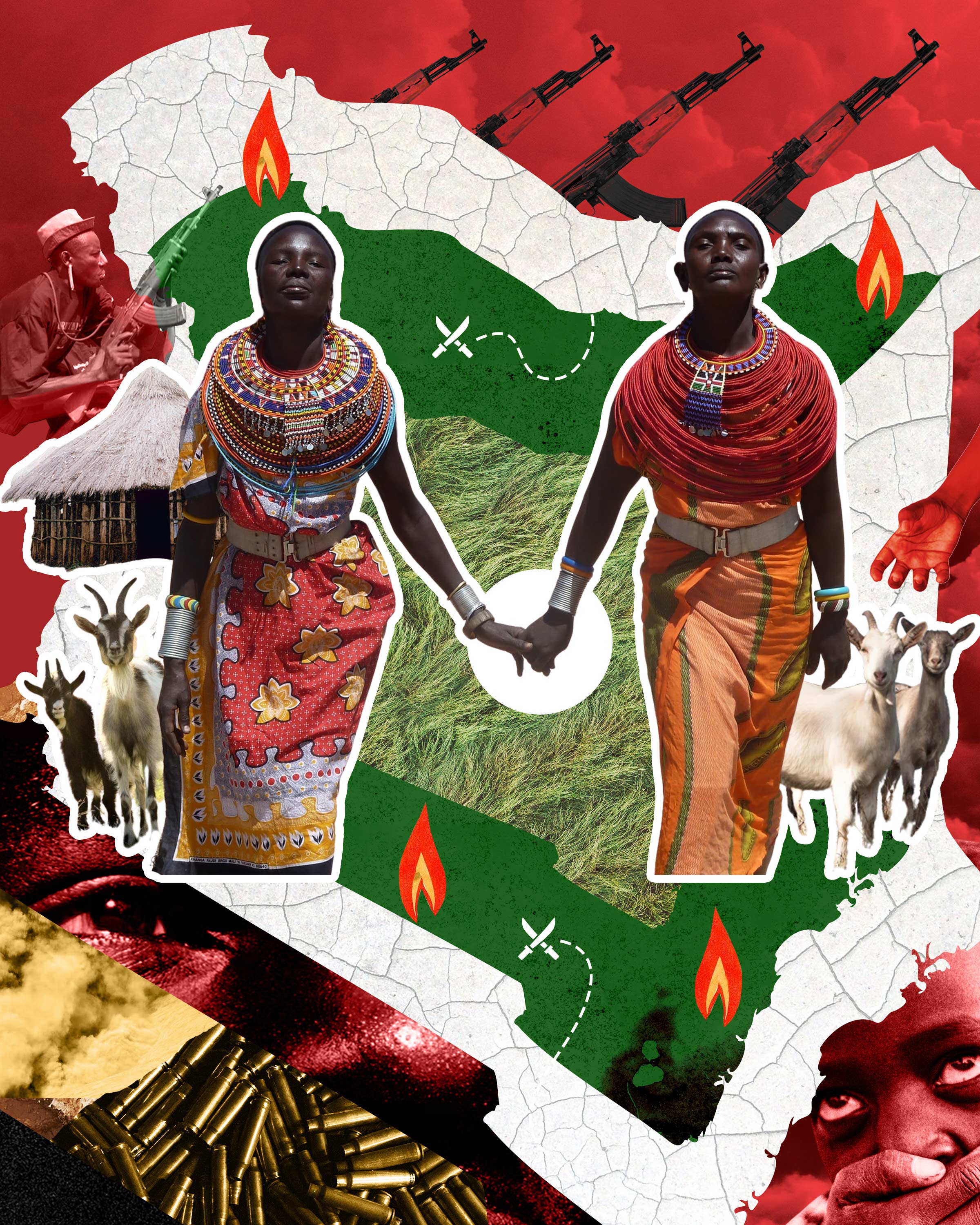 For many people around the world, the radical effects of the climate crisis are just a distant worry for the future. In Kenya, they are very real — and very much present.

Hundreds of people were killed and thousands displaced throughout 2021 in the Kenyan Arid and Semi-Arid Lands (ASAL), as pastoralists fought over the few remaining water sources and grazing lands.

The ASAL frontier covers about 75% of Kenya’s landmass, and is mainly inhabited by herders who depend on cattle for their livelihood. In 2019, and continuing through 2020, hundreds of millions of desert locusts invaded the country, eating up nearly 300,000 acres of much-needed pasturage. According to National Geographic, the average locust swarm can, in one day, eat around 192kg of vegetation. These locusts, which consume their own weight in food every day, ate crops, flowers, grass, shrubs, and leaves on trees, leaving pastoralists devastated. Two consecutive poor rainy seasons followed in 2020 and 2021, causing further drought and severe food insecurity in the ASAL.

Pastoralists lost their traditional grazing areas to the locusts, while many were hit hard by consecutive droughts. As a result, they were forced to move from one county to another with their livestock in search of water and grass as the dry season continued.

But this movement opened the door for resource-based conflicts, internal displacement of people, and severe malnutrition.

When drought strikes, pastoralists travel for many kilometres with their livestock and invade grazing fields in neighbouring counties. These invasions, which are almost always violent, leave scores dead and injured, displace families from their ancestral lands, and cause mass destruction of property.

The death of cattle during drought also leads pastoral communities to raid their neighbours’ territories to restock their dwindling herds and cushion themselves against the losses. Some rustlers work closely with businessmen who buy the stolen animals at a lower price, and resell at livestock markets.

Proliferation of illegal firearms, where herders carry rifles to protect their herds, makes these ambushes even more deadly. As pastoralists take up arms for defense or revenge, the line between herder and rustler becomes blurred.

On 10 June 2021, cattle rustlers from Baringo county raided Turkana East. They shot and injured a police officer, damaged four police vehicles and stole donkeys, goats, cows and camels from 50 households during the attack. More than 6,000 residents fled for safety.

In Isiolo county, five people were killed and hundreds displaced on June 19th, when herders from the neighbouring Wajir county attacked them. This followed a dispute with the pastoralists over water and grazing fields. The assailants also destroyed a borehole which served as a source of water for the community and their livestock.

This conflict, coming barely a week after a fierce gun battle between two groups of herders outside Isiolo town, left six people dead and several nursing gunshot wounds. The raiders, suspected to have come from Samburu counties, unleashed terror in the villages, causing hundreds to flee as they made away with 300 goats.

On 4 September, rustlers stole thousands of cattle and set 50 houses ablaze in Laikipia county as more than 150 families fled their homes to safer areas for fear of further attacks.

In neighbouring Samburu county, 14 men were killed and five others wounded on 3 November in a fierce gun battle. The fighting broke out after gunmen from Turkana county raided villages in Samburu and stole 1,000 cattle. In the past two months alone, rustlers have killed 24 people there.

On 8 September, Kenyan President Uhuru Kenyatta declared the drought, which by that point had affected more than two million people in ASAL, a national disaster.

Three weeks later, the United Nations Office for the Coordination of Humanitarian Affairs released a drought report which revealed that more than 465,200 children under the age of 5 and more than 93,300 pregnant or lactating women in the ASAL were acutely malnourished.

The report showed that rates of malnutrition in warring Garissa, Wajir, Mandera, Samburu, Turkana, Marsabit and Baringo Counties were critical, meaning between 15% and 29.9% of the population was acutely malnourished, with increasing mortality and disease levels. In Tana River and West Pokot Counties, their analysis was serious, assessing that between 10% and 14.9% of the population was acutely malnourished. Because of compromised food consumption, symptoms among these populations included jutting ribs and loose skin, swelling in the ankles, feet and belly as blood vessels leaked fluid under the skin, and accelerated heartbeat because of dehydration.

“Acute malnutrition has surpassed the emergency threshold in many areas, affecting between 15% and 30% of children in at least eight counties,” the report states.

Meat and milk dominate diets in these areas, so severe shortages in each of these has contributed significantly to the high levels of acute malnutrition.

Continuing conflicts in the counties of Laikipia, Samburu, Marsabit, Wajir, Isiolo, Turkana, and Garissa have compounded food insecurity by displacing communities and disrupting their livelihoods.

Normally, a child’s diet in the ASAL is enriched with cream, milk and meat, but when residents flee from raiders with nothing but the clothes on their backs, their diet and nutritional habits are disrupted. Away from their herds, children cannot access milk, which is an important source of calcium, phosphorus, vitamins, potassium, vitamin D and protein.

Families’ livelihoods are interrupted, too. They can no longer earn money by selling milk and manure dung from their animals, which they would have then used to buy vegetables, as well as to cater for other family needs. Displaced families are separated from key sources of nutrition and the very possibility of accessing those vital sources of nutrition, too.

As the men stay behind to defend their homes, women, children and the elderly flee to makeshift displacement camps on the edges of towns, where water-borne diseases are rampant and living conditions are dire.

Reports reveal that diarrhea cases across Isiolo county increased by 22% between January and June 2021 compared with similar periods in 2020, because of acute water shortages and poor hygiene practices.

But it’s not just displaced families who are experiencing malnutrition. As the pastoral men move to other counties in search of pasture, their women, children and the elderly left at home suffer from the same nutritional challenges. While the cattle are away, family members left at home lack milk and meat in their diet. As a coping strategy, mothers and young children have resorted to eating wild fruits and roots to quench the hunger pangs.
‍

Eating food low in nutrition has culminated in abnormally high rates of acute malnutrition in the region.
‍

The Kenyan government now plans to have chips put in livestock in order to curb cattle rustling, by giving authorities the means to trace and identify stolen animals. Speaking on 5 November, the assistant secretary of the agriculture ministry said this would help improve cattle security, because tracking the animals will mean “we will know where they are in case of theft.” In addition, the government is also distributing food relief to both livestock and households in the affected areas.

On 9 December, Save the Children, using data compiled by the UN, reported that about 262,500 acutely malnourished children may have died between January and November 2021 in countries including Kenya, Somalia and South Sudan. The numbers may likely increase; a report from USAID’s Famine Early Warning Systems Network indicates the continuing drought is likely to intensify excess livestock deaths, increase resource-based conflict, and worsen food insecurity in Kenya until mid-2022.

Mitigating pastoralist fights linked to boundary movements and initiating conflict resolution between displaced people and host communities would help ensure ASAL families’ livelihoods and diets are not interrupted. But Kenya’s next general election is in August 2022, and many politicians are already busy with campaigns, leaving the population to deal with their own suffering. So for now, the grass and water wars look set to continue.