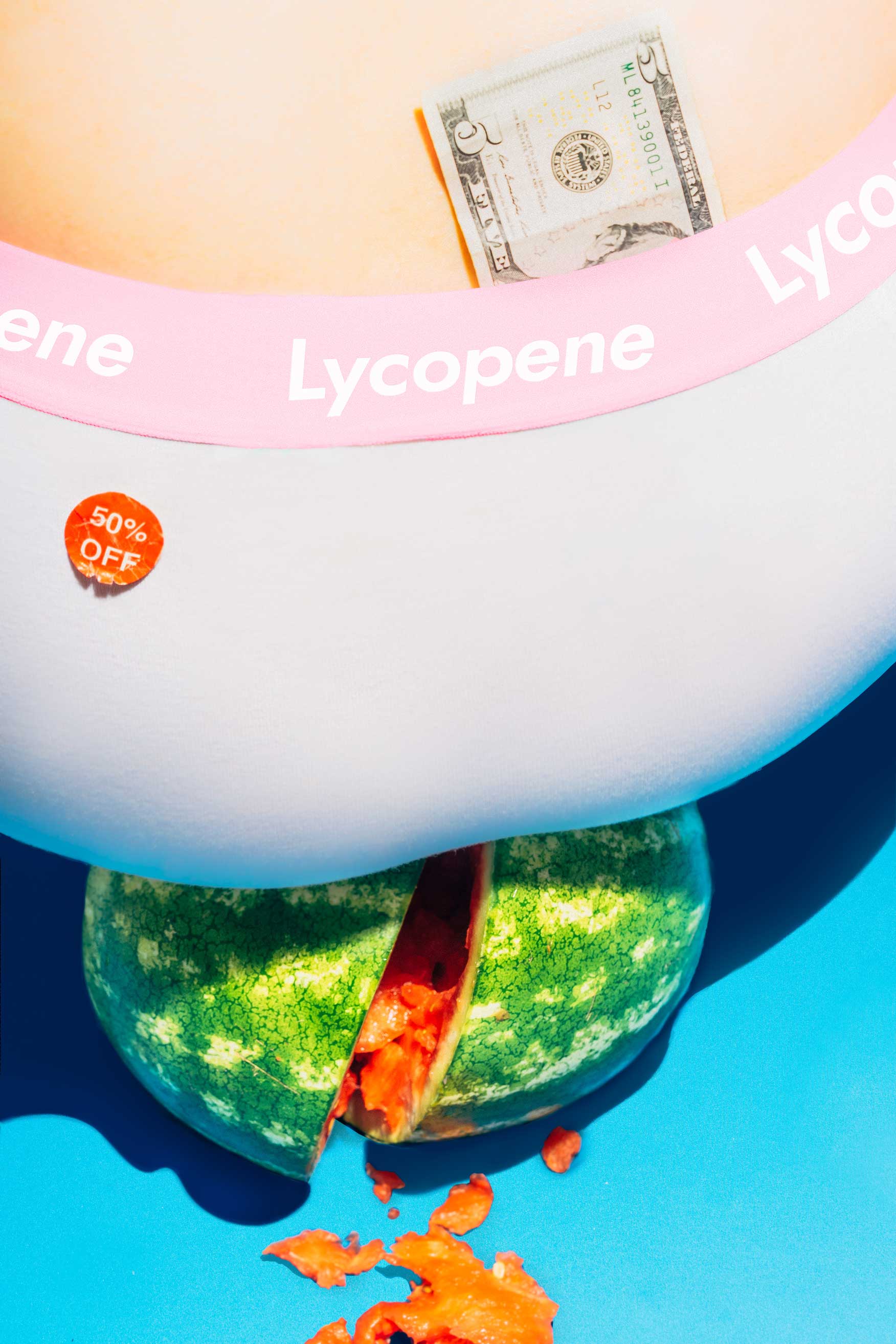 Digital Collage Artist:
Taylor Kare
As the watermelon was bred to be a sweeter, more desirable commodity, merchants began to trade the fruit for profit—the mercantilist precursor to capitalism.
by
Kate Raphael
6/11/2021

Mark Twain famously wrote of the watermelon: “When one has tasted it, he knows what the angels eat. It was not a Southern watermelon that Eve took: we know it because she repented.”

The flavour and aroma of a fresh, thirst-quenching watermelon wedge is sliced from the divine. It cuts through summer humidity with a refreshing crunch, flooding the mouth with pink nectar. Once we’ve tasted it, we cannot, will not repent. And yet, that perfect flavour has proven surprisingly elusive for millennia.

In an era where the quest for clean, natural foods dominates the discourse on what we “should” be eating, many have bemoaned the fact that the watermelon flavour we find in everything from Jolly Ranchers to Juul pods tastes nothing like the revitalizing summer fruit we’re after. Why is the loud, overpowering artificial flavour (vaguely reminiscent of cleaning fluid) so different from the fruit itself?

Watermelon’s flavour is surprisingly difficult to replicate artificially. The fruit's palate arises from a delicate combination of many compounds that are resource-intensive and complicated to recreate in a lab setting. One study synthesized a so-called “watermelon aldehyde,” which closely approximated the smell of freshly cut watermelon. However, the compound proved to be too unstable to be used artificially. It oxidizes quickly when exposed to air, just like the fatty acids that create a real watermelon’s aroma once it’s been sliced.

A more complex balance of chemicals that might produce a flavour closer to watermelon isn’t cost-effective. In the production of most artificial flavours, only one or two compounds are used in flavour production. This technique works well for flavours like vanilla or lemon, where vanillin and citric acid give a bold impression of the ‘real’ flavours.
‍

But while the researchers of the above study attempted to recreate watermelon’s flavour with an ester, a more stable chemical compound often used in artificial flavours, they couldn’t synthesize a compound that tasted remotely close to the heavenly watermelon.

In our futile pursuit of the pure, we’re often averse to artificial compounds, primed by the wellness industry to consume only the organic and unadulterated. But we need to reevaluate how we define artificial in the first place.

Humans had been tinkering with the watermelon for millennia before we came to “know what the angels eat.” What we now call watermelon began as a bitter, hard-shelled fruit smaller than an egg, which was drought resistant and prized for its canteen-like ability to store water. Horticulturist and watermelon whiz Harry Paris speculates that once Egyptians began cultivating and domesticating watermelons, they began to modify the bitter taste, attributed to one gene—relatively easy to breed out of the plant’s progeny.

At that point, watermelon still wasn’t the sweet fruit we know today. Nevertheless, its capacity to store water was prized during travel, and the fruit was stowed away on ships and traded throughout the Mediterranean and parts of Europe.

By 200 CE, Hebrew texts grouped the watermelon into the same category as figs, table grapes, and pomegranates—all of which share one defining characteristic: sweetness. As the fruit was bred to be even sweeter, it became redder as well (the genes for pigment and sweetness are linked), coming closer to the watermelon we know today.

European colonists and slave traders brought this sweet dessert melon to the United States, where it flourished from Florida to Massachusetts. The watermelon spread into the New World, but major cultivation advances wouldn’t occur until the mid-20th century, when seedless watermelons were first produced in Japan in 1939.

The seedless hybrid is created by crossing a regular diploid watermelon with a tetraploid (4n) watermelon. Each ‘parent melon’ passes on half its genes, resulting in a sterile triploid (3n) watermelon that lacks the black seeds capable of reproduction. With half again as many chromosomes as a typical watermelon, its genes are expressed more, making the fruit juicier and more flavourful than the better-known diploid variety.

The seedless variety now dominates the acreage dedicated to watermelon cultivation and has taken over the cardboard produce bins of grocery stores. Sayonara to the seed spitting contests of summer barbecues.

The same relentless force has shaped the flavours of both so-called ‘natural’ and ‘artificial’ watermelon: capitalism. The resulting flavour profiles of each are the most potent that can be produced cost effectively to meet our thirsty demand.

The industrial watermelon flavour profile we’ve come to know falls a long way from the vine. It’s cheaper and less labour-intensive to create a ‘fake’ watermelon candy flavour than one that's true to life. That’s economics. And so, the process has been streamlined using an inexpensive, stable compound (an ester, a molecular configuration that does not easily give up electrons) in place of a delicate bouquet of less stable aldehydes (their molecular polarization increases their reactivity and they are easily oxidized by water). The world is content enough to keep consuming the resulting resource-efficient watermelon-flavoured Mountain Dew and Sour Patch Kids, so there isn’t enough pressure to change the taste.

The same logic shapes fresh watermelon. To stay in the game, farmers have to grow hybrid seedless varieties because the demand for those is so high. Seedless melons have been around for decades now, but more recent developments have modified watermelons to have greater disease resistance, a shorter growing period, and superior sweetness.

The lament that our food in general has departed dramatically from ‘the natural’ is growing in volume and urgency. A chorus of voices screams that our food system is broken: billions of people are left unfed, and our agricultural, production, and distribution practices drive the planet ever closer to climate catastrophe. Our foods are over-packaged, over-processed, and pumped with high-fructose corn syrup. Dirt cheap commodities are prioritized and most food innovation just makes food production cheaper and faster, with a longer shelf life and higher profit margin.

But our system is not broken in any conventional sense. This is exactly how the existing food system is supposed to work. It prioritizes cheap materials and mass production, the lowest quality food that will sell for the right price. It’s built on exploitation and inequality.

The watermelon is a case in point. These flavours were created and curated by unrecognized, unacknowledged cultivars and innovators millennia ago. As the watermelon was bred to be a sweeter, more desirable commodity, merchants began to trade the fruit for profit—the mercantilist precursor to capitalism.

Shortly thereafter, the watermelon came to the U.S. on the same ships that brought people from Africa to be enslaved in American colonies. Watermelons were long cultivated by enslaved Black people in the South, who continued to grow the fruit after emancipation, only to have the watermelon turned against them as a racist trope.

Through the 20th century to today, the demand for watermelon has increased, and that economic pressure has manufactured the sweet, symmetrical, sterile, seedless watermelon fruit, and the in-your-face, cheap, pink watermelon flavour in everything from candy to schnapps.