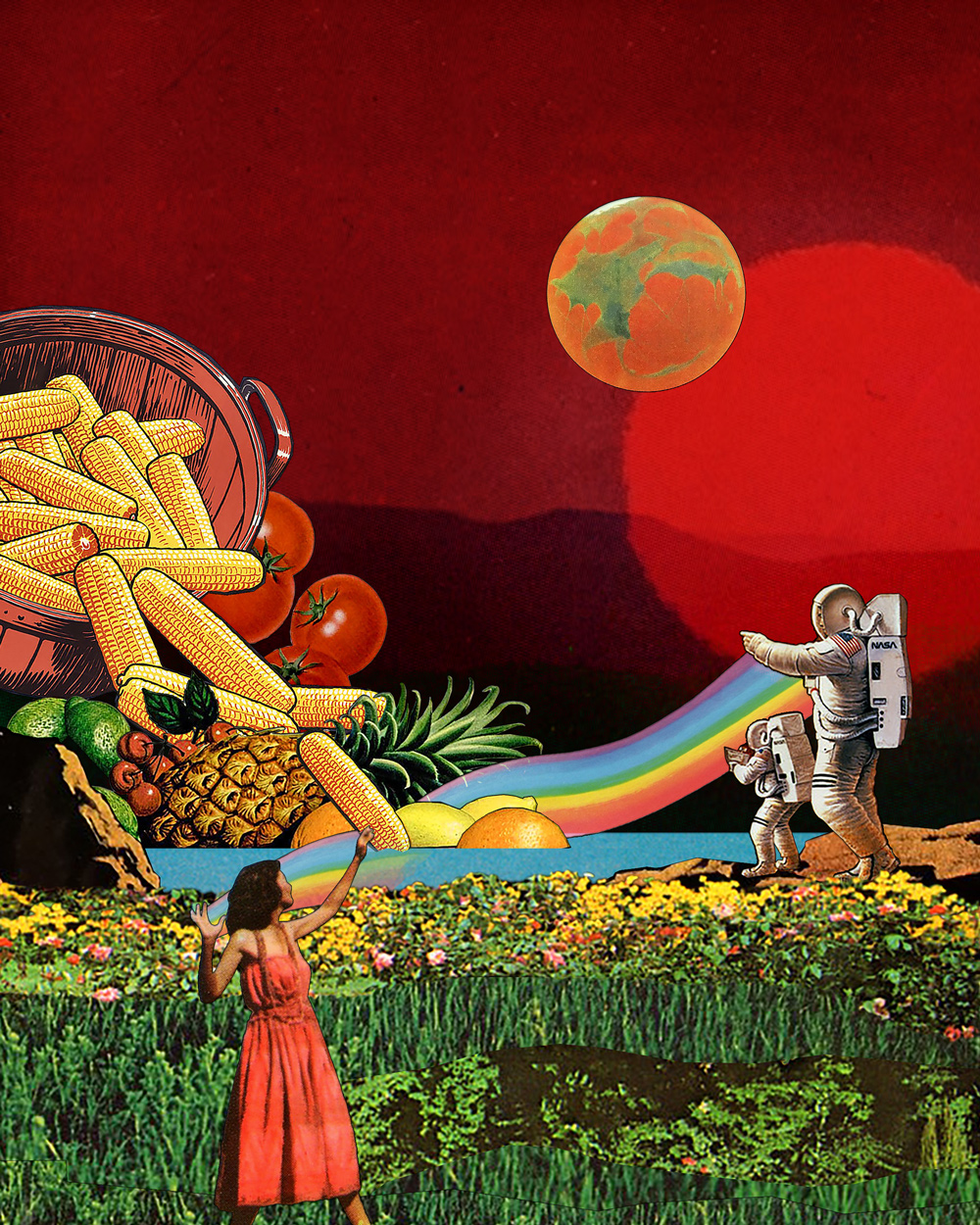 Digital Collage Artist:
Dana Fortune
The scale of innovation needed to replace Earth’s conditions has raised a tantalizing question: If we figure out how to grow food in space, can’t we grow it anywhere?
by
Amir Aziz
8/25/2021

What will astronauts eat on the way to Mars?

It’s a vital question with complex answers. Longer mission times demand vastly greater quantities of food, and increase the risk of it spoiling—dehydrated foods and packaged goods won’t be enough anymore. Instead, the answer lies in space farming.

The scale of innovation needed to replace Earth’s conditions has raised a tantalizing question: If we figure out how to grow food in space, can’t we grow it anywhere?

NASA and the Canadian Space Agency believe a small step to growing food in space could be a giant leap for farming on Earth, one that feeds people in some of the harshest environments on Earth. For proof, just look at the Deep Space Food Challenge.
‍

The Deep Space Food Challenge is a joint effort by NASA and the Canadian Space Agency. The Food Challenge’s ultimate goal is to select the best interplanetary food system from a field of competitors. But the NASA–CSA venture believes so strongly that this technology could—and should—also work for Earth that part of the scoring criteria is based on the winning system’s ability to work on our home planet.
‍

But what does farming in space have to do with farming in, say, northern Canada?
‍

Dr. Mark Lefsrud is an Associate Professor at McGill University, head of the Biomass Production Laboratory, and a participant in the Deep Space Food Challenge. Dr. Lefsrud has contributed to the Advanced Plant Habitat on the ISS, and to greenhouse operations in the Northwest Territories and northern Quebec. When he lists the challenges of farming in the ISS and in Northern Canada, they sound eerily similar.
‍

The first challenge is energy. Space farming requires an HVAC system to control temperature and humidity and to power the LEDs that substitute for sunlight. Not only would farming in the Northwest Territories require those same technologies during a sunless winter season, but energy costs are also at a premium.
‍

Problem number three? Experience. Dr. Lefsrud says that a person needs around two years of full-time growing experience to learn the quirks of farming a particular crop. They also need to know enough about the food system to fix any machines when they break. That’s something astronauts, and people in food-insecure communities, don’t always have time to master alongside other demands. This means a system needs to be as easy to use as possible, or possibly even automated.
‍

If it sounds like space farming and extreme environment farming apply the same concept in different situations, that’s because they do. In fact, that concept has a name: Controlled Environment Agriculture (CEA). CEA is the scientific field of growing anything indoors, whether that be a greenhouse, a vertical farm, or the ISS’s experimental plant growth chamber.
‍

NASA's interest in the field began in 1998 at the Kennedy Space Center Biomass Production Chamber. The Biomass Production Chamber grew hydroponic wheat, soy, and radishes among other crops, mimicking a theoretical martian farm. But NASA did not invent CEA. Instead, it drew from a discipline arguably as old as the Romans’ first moveable cucumber beds in 15 AD, and more recently from the first experiments at Cornell using artificial light in greenhouses.

Dr. Lefsrud explains that, rather than thinking of space CEA as benefiting extreme-environment CEA, these fields have already benefited from each other, with innovations from one environment often informing those in the other. One of the largest innovations using CEA in recent years came not from space research, or from food-growing greenhouses, but from the cannabis industry sinking millions of dollars into research for better LEDs. These improved LEDs didn’t just help the cannabis industry, they improved all other CEA projects that use LEDs.

So, while it's tempting to imagine Deep Space Food Challenge competitors creating a greenhouse pod that can be dropped into the Sahara, or a hydroponic shipping container that can blast off to the moon, space-based CEA will probably benefit remote environment CEA by creating overlapping innovations that can improve both fields, like the cannabis industry’s LEDs.
‍

So, where’s the overlap? What innovations does Earth-based CEA need that space-based CEA is working on? Many developments needed for space farming, such as zero-gravity irrigation and optimizing plant genetics for space, are unlikely to cross over, but others—such as nutrient sensors, automation, HVAC, and lighting—could be applied to an earth-based solution.
‍

These would need to be applied piece by piece to form a unique system. Any CEA project needs to be tailored, Dr. Lefsrud explains. That requires adjusting the system for the unique conditions of the environment and working with the communities involved to make sure it can work for them, whether that be a crew of astronauts or residents of a remote community.
‍

So, if the technical challenges of growing food on Mars and in a northern Canadian community are similar, does that mean CEA can contribute to greater food security? Not necessarily.
‍

Dr. Valerie Tarasuk is a faculty member in the University of Toronto's Department of Nutritional Sciences, and she has written about food insecurity in Nunavut.

"Sitting in the south, we can cook up what we think are technological solutions. But whether they're appropriate or not is a whole other thing."

Dr. Tarasuk explains that more than half of the Nunavut population is food-insecure, which in turn causes further challenges for Nunavut’s population. Food-insecure populations suffer higher rates of mental health issues and higher rates of chronic health conditions. Food insecurity also contributes to the breakdown of traditional community structures. Even if existing greenhouses already operating in the North are improved by incredibly effective technology, the scale of the problem is too huge for these operations to fix anything.
‍

"It would remove the cost of transportation, but is it even viable to think of a greenhouse-based food supply that would be sufficient for the population? Let alone culturally appropriate?"
‍

Even an increased food supply would not address the root causes of food insecurity, Dr. Tarasuk explains. Food insecurity is an entrenched social problem, fed by poverty, climate change, and the erosion of traditional social life under colonization. If no one can afford the food grown in a greenhouse, it still can’t feed anyone.
‍

What the Deep Space Food Challenge—with its well-meaning desire to “Solve for Earth”—can achieve is therefore limited. Innovating and improving food technology does not guarantee everyone will get fed, or be able to access the food supply. Dr. Chantel Kozachenko, in a thesis on CEA's applicability for food security in Northern communities, argues that new technology might actually distract from the real solutions: Poverty-reduction policies, social supports, and, crucially, collaborating with food-insecure communities.

By finding better ways to grow food in space, NASA and the CSA will find more effective ways to grow food on earth. But the technical challenges are actually the easy part. The hard part is the government’s responsibility, and therefore voters’, too.

Poverty-reduction initiatives and community collaboration may not sound as fun as a space-greenhouse landing in a remote community to grow spinach, but they are the tools that will dismantle the root causes of food insecurity. When the rockets launch to Mars, it’ll take more than technological innovation to ensure that they leave an Earth where no one is hungry. 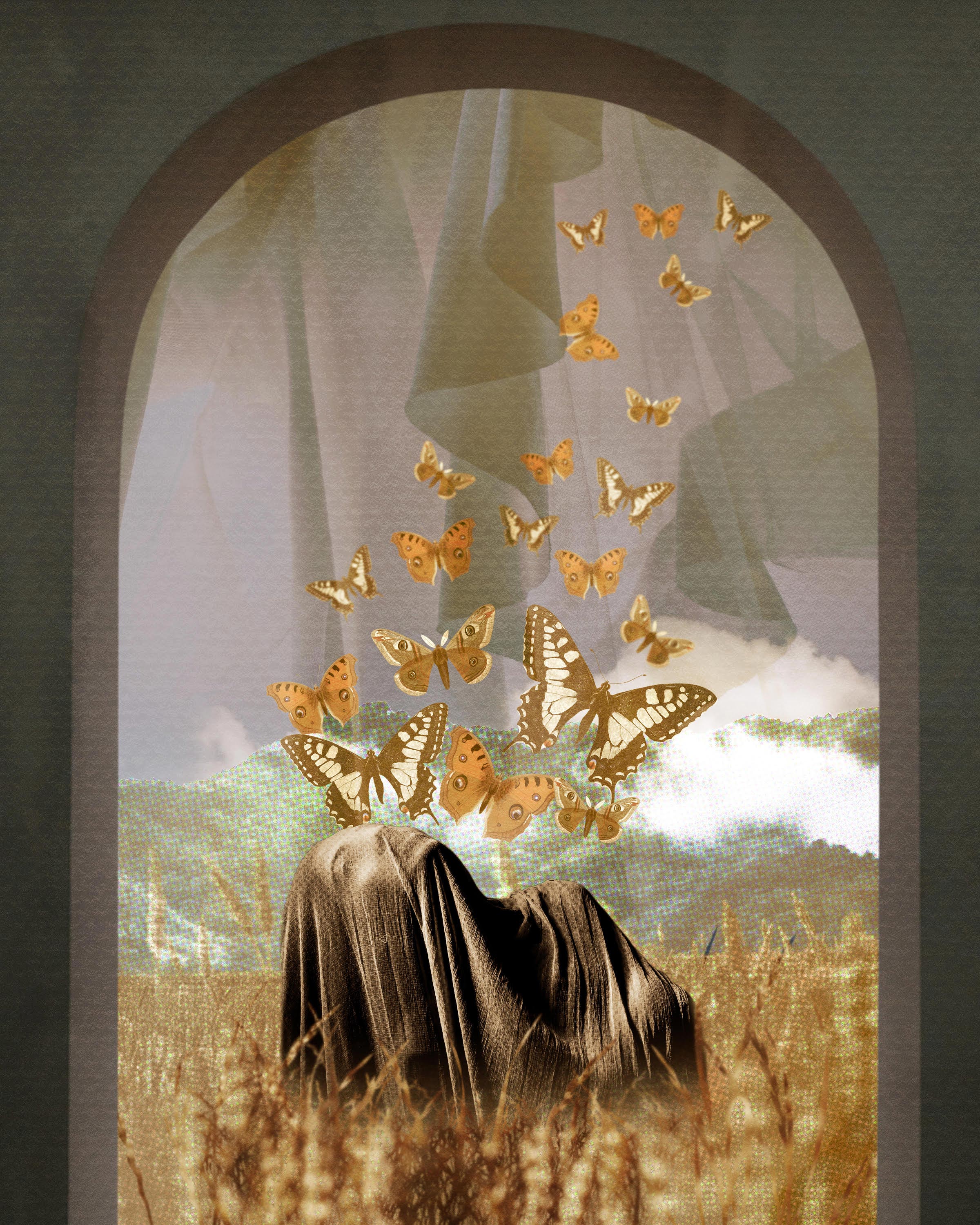 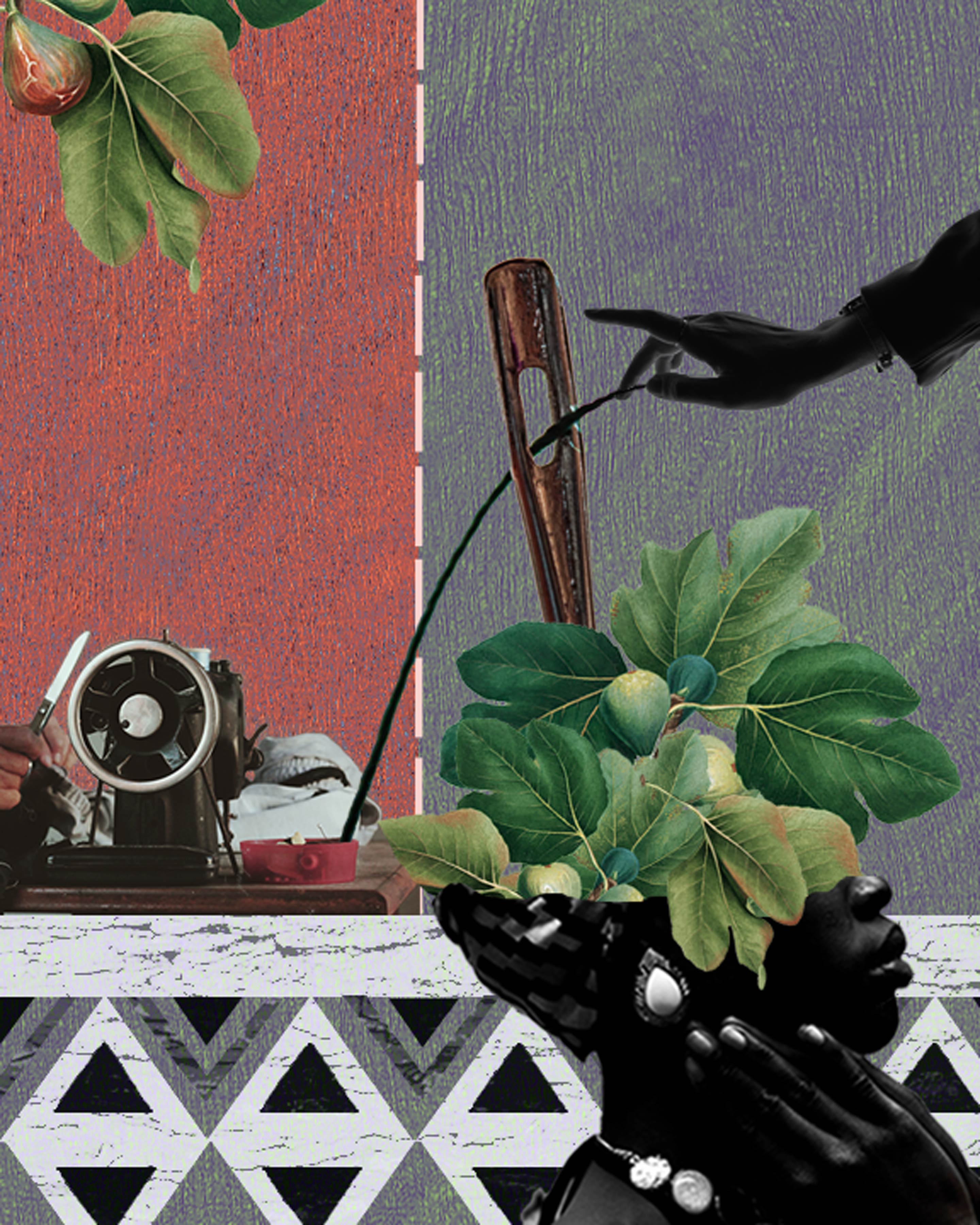 Textile
Missionaries said barkcloth was demonic and diabolical. Now it could remake the future of fabrics.
The textile sourced from fig trees survived colonialism and civil war to emerge as a sustainable material fit for the challenges of our age
Mwende Mutuli Musau
6/16/2022
Sign up to receive a monthly update from Sliced.