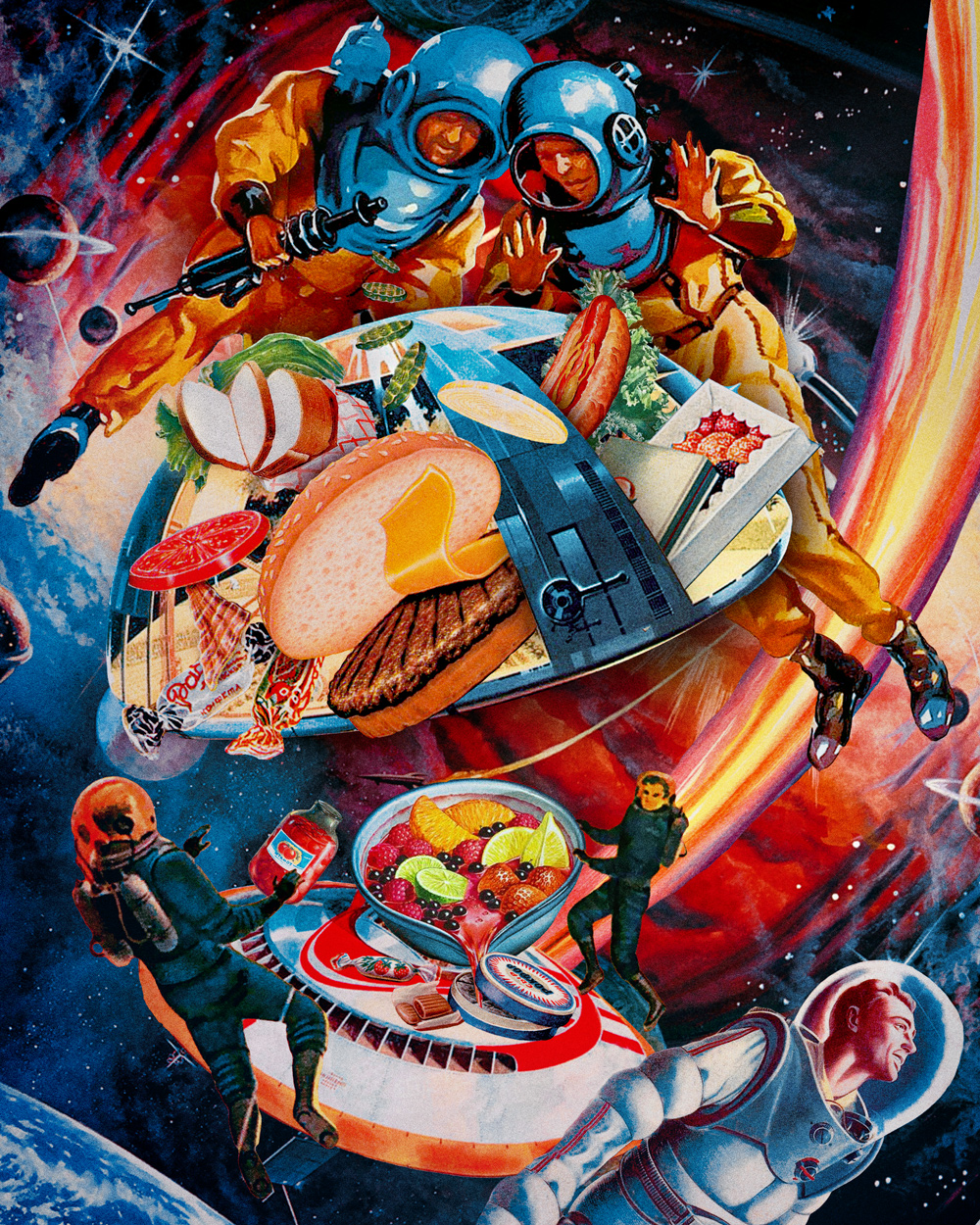 Digital Collage Artist:
Ack Panyasombat
Space food innovation is at a crux point. NASA and nearly a dozen other countries, including Canada, have signed on to the Artemis Accords to start long-term missions on the moon later in the decade. There will be definite improvements in food for these space crews, and government agencies such as the Canadian Space Agency will also look for spinoffs that can help remedy food insecurity in Indigenous populations and elsewhere.
by
Elizabeth Howell
8/25/2021

Back in the 1960s and 1970s, the food options on offer for a crew launching into space were less than palatable. Everything came in tubes and there was no hot water available—let alone coffee. It was only during the Skylab space station era of the 1970s that things started to improve.
‍

We've come a long way since then, backed by 30 years of space shuttle research, not to mention more than 20 years of long-term living aboard the International Space Station. Today's crews are far beyond the era of having to squirt pastes into their mouths and wash it down with plain old water.
‍

But space food innovation is at a crux point. NASA and nearly a dozen other countries, including Canada, have signed on to the Artemis Accords to start long-term missions on the moon later in the decade. There will be definite improvements in food for these space crews, and government agencies such as the Canadian Space Agency will also look for spinoffs that can help remedy food insecurity in Indigenous populations and elsewhere.
‍

NASA and the Canadian Space Agency (CSA) recently began the Deep Space Food Challenge encouraging people in both countries to think about space food innovation. As such, Cassandra Marion, a science advisor at the Canada Aviation and Space Museum in Ottawa, is educating the public and scientists alike about the problems astronauts face in space.
‍

Space food issues are so complex that NASA has vast volumes discussing them, covering everything from nutrient absorption to digestive issues. Space food today is swift to prepare and requires little time and preparation on the part of astronauts, thanks to changes in space tech like the ability to reheat food in place.
‍

The moon will require food scientists to "level up" their preparations, however. Resupply ships filled with fruits and vegetables will have to travel three days instead of a few hours to the space station, lessening their available shelf life. Worse, the astronauts will work outside the Earth's magnetic field, which shields them from the worst of space radiation. "They might need more antioxidants," Marion says of the moonbound crews, as such foods can help stave off some of the effects of radiation exposure, which can lead to long-term problems such as cancer.
‍

Several Canadian teams are already working on how to keep these more distant crews supplied, well-fed and happy. The University of Guelph has researched space food science since 1995, largely under the leadership of Mike Dixon. He is a professor in the school of environmental sciences who runs the Controlled Environment Systems Research Facility. The facility includes studies in plant research complementing a NASA program in advanced life support to use plants and other "regenerative" life support systems for human missions beyond Earth.

"[The facility] gives us a pretty powerful research tool to evaluate the interaction between plants and the environment," Dixon says. "We set out a long time ago to ask some fundamental questions about taking plants into extreme environments, and figuring out the thresholds of stress responses to things like pressure, temperature, humidity, nutrients, water—the whole gamut."

Lately, for example, the lab has been assessing light quality and spectra on plant growth, through LED technology. "It turns out to be really powerful, really; we can change the size, shape, taste and colour profile of the nutritional or medicinal compounds," Dixon observed.
‍

Dixon's most recent space borne experiment was sending several thousand barley seeds to the ISS to assess conditions the seeds can withstand in space. While most are indoors, a selection of seeds are mounted outside the space station to see how radiation, microgravity and huge temperature swings of 200 degrees Celsius affect them. In a few years, if schedules hold, Dixon will participate in a NASA Commercial Lunar Payload Services mission to grow seeds on the moon, too. Plant selection continues in consultation with Indigenous groups, as some "culturally significant" crops such as tobacco may be of use to them, he said.

To make the most of a lunar base, Mark Lefsrud—an associate professor at McGill University who leads the Biomass Production Laboratory—says researchers should not see constraints such as available room, light and gravity as problems, but instead as guardrails for great plant growth.
‍

"You look at these limitations as positives," he said. "One of my students is working on how we can use waste material on the space station, or on a lunar base. They [astronauts] use clothing—typically cotton dyed material—but we can feed this to bacteria to release nutrients so that we can feed them back to the plants. … So we don't look at them as waste products, but look at them as a feed source for the next step of the [growing] process. It's like a 'circular economy'."
‍

Looking ahead to Mars, NASA hopes to make food that can last as long as five years to reduce resupply needs. The agency says the technology to keep flavour and freshness available is still being developed, but there is already promise for extending shelf life of some of its standard astronaut menu. As those who watched "The Martian" may remember, there were moments in the narrative when space food shipments were key to the plot of helping a crew stuck on the Red Planet. But when the orbits of Earth and Mars do not exactly align, shelf-stable food and the ability to grow things in place will be key to keeping crews safely fed between shipments.
‍

In-situ resource utilization, in fact, is one of the key elements that the CSA and NASA both hope that astronauts can take advantage of at distant destinations. NASA's Lunar Surface Innovation Initiative plans to rapidly develop such technologies as changing lunar ice to water and using solar power to keep vital equipment going for astronauts and machines. That's on top of trying to grow plants with lunar soil, but with some modifications like injecting nutrients from normal human or animal waste products (much as what we saw in "The Martian").
‍

"We start with fundamental technology demonstrations on the early uncrewed flights, which will help to inform the design of the more complex systems as we move toward human missions," the initiative's lead, Niki Werkheiser, said in a 2020 statement. "There’s no 'miracle occurs here' button. There are real challenges ahead and a great deal of work to do."