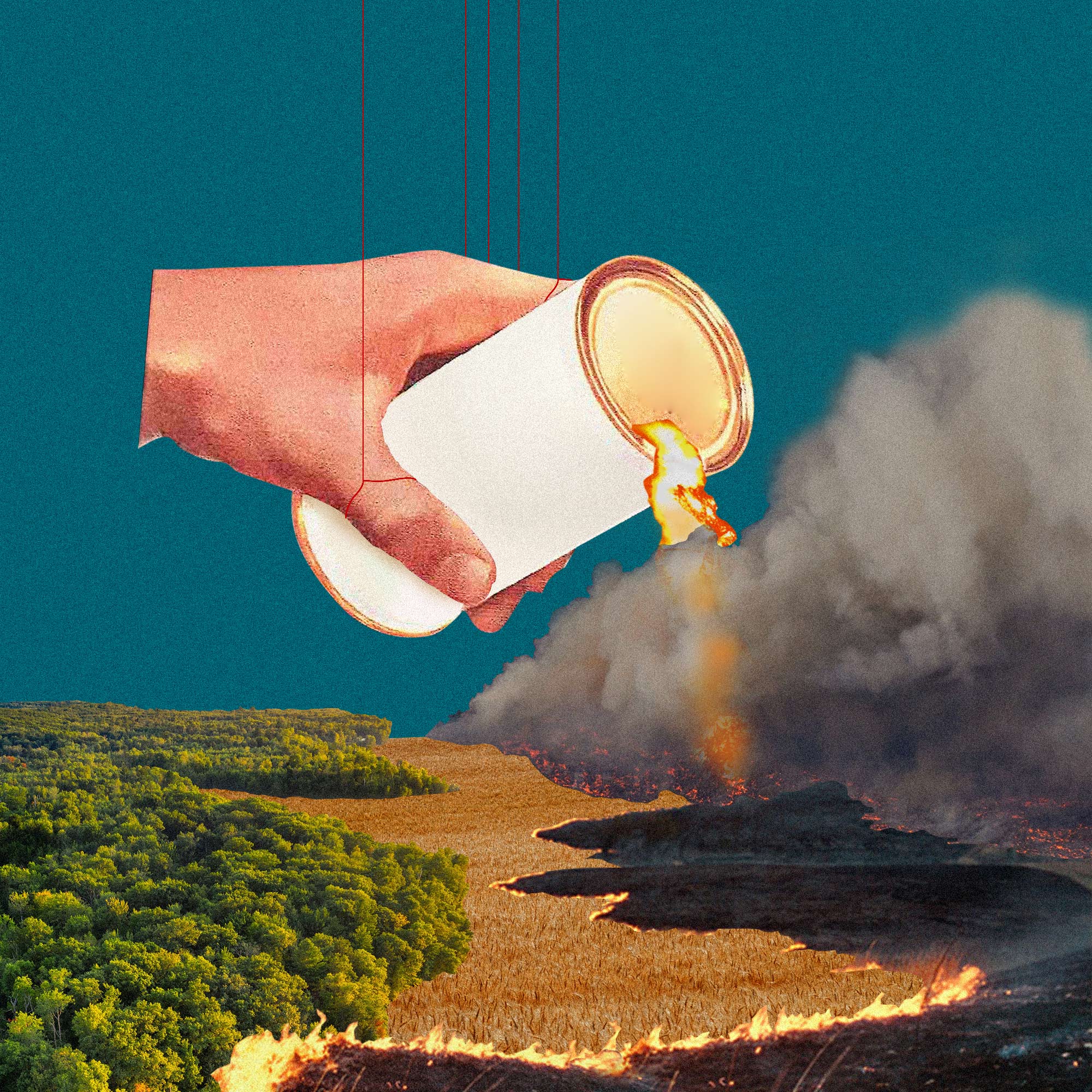 Digital Collage Artist:
Arfie Rovexotte
Slash and burn is a 12,000 year-old farming technique where forests or fields are chopped down, allowed to dry, and then burned to pave the way for agriculture, however slash and burn fires spiraled out of control in 2019 and burned nearly 330,000 hectares of Indonesian forest and national parks.
by
Sydney Allen
7/15/2021

Indonesia drew global ire in 2019 for failing to prevent forest fires that destroyed thousands of hectares of biodiverse rainforest on the island of Sumatra. These fires ravaged critically endangered orangutan populations, injuring and destroying the habitats of primates. The fires cost Indonesia $5.2 billion and millions of residents were affected after school and businesses were forced to close. The resulting smog was so vast that it spread to Singapore, Malaysia, and parts of Thailand, causing an increase in health and respiratory problems.

Government officials and environmentalists alike were seriously concerned by the 2019 blazes. They even eclipsed the massive fires of 2015, which some government representatives had labeled “a crime against humanity”. But what many people don’t realize is that these were not natural fires, but the latest collateral damage in an annual slash and burn campaign.

Slash and burn fires spiraled out of control in 2019 and burned nearly 330,000 hectares of Indonesian forest and national parks. Slash and burn farming is common worldwide, although the recent cases in Indonesia highlight a pattern of corporations exploiting long-standing indigenous traditions on a massive scale to increase their agricultural capacity and profit margins.

Slash and burn is a 12,000 year-old farming technique where forests or fields are chopped down, allowed to dry, and then burned to pave the way for agriculture. The ash and debris leave a nutrient-rich layer of soil that makes it easier to grow crops during the next rainy season.

According to ecologist Michael Hands, an estimated 200 to 500 million people rely on slash and burn agriculture worldwide, with up to 34 million people in Indonesia depending on this method. The problem is that this model is unsustainable on a large scale and can ultimately end up exhausting all nutrients from a plot of land, forcing users to move on and burn new sections of the forest after one to two years. It can destroy the local environment as it eliminates crucial ecosystems, kills any animal or plant species within the burn range, and forces the remaining animals into reduced and overcrowded territories as their habitats are eroded.

Despite Indonesia’s robust economy, most Indonesians remain relatively poor. Fifty three percent of Indonesians live in poverty in 2018 based on the World Bank’s international poverty line. Slash and burn is the fastest, easiest, and most cost-effective way for many farmers to access food and income.

Indonesia’s subsistence farmers have traditionally used slash and burn to prepare small plots of land used to feed individual families or small communities. While slash and burn is illegal throughout the archipelago, Indonesia’s environmental policies contain an exemption recognizing “local wisdom,” which allows indigenous communities to continue long-standing slash and burn practices on up to 2 hectares (5 acres) of cropland per family.

In many regions, indigenous farmers have been using these methods in the same way for hundreds of years, with minimal impact on the surrounding forests or grasslands. While this practice does cause some environmental harm, such as deforestation and smog pollution, the effects are relatively small and contained as the farmers are working on single plots of land within isolated communities.

Despite this upstanding record, some government officials and plantation lobbyists blamed the 2019 fires on small subsistence farmers. However, based on the scale and location of the fires, many international environmental groups agree that the likelier culprits were mega-farms clearing land for unsustainable palm oil, pulp, and paper plantations, eroding one-of-a-kind natural ecosystems in the process. This has resulted in a barrage of sweeping legislation targeting indigenous farmers.

In February 2020, Indonesia introduced a broad law aimed at punishing subsistence farmers for using fire to clear their land. It made it easier to prosecute these farmers and created strict fines for rule-breakers. This same rule removed a crucial provision that allowed local authorities to sue plantation firms for starting fires in their communities.

Additionally, the widely unpopular December 2020 omnibus law, which deregulated a range of industries in the name of job creation, further deregulated the palm oil plantation industry. The bill offered palm oil traders a three-year grace period for applying for permits and granted them amnesty for illegal logging in protected forests, among other benefits.

In a statement to Mongabay, an international environmental watch organization, Rukka Sombolinggi, secretary-general of the Indigenous Peoples Alliance of the Archipelago, voiced her concerns.

“This is a violation of [the] constitutional rights of Indigenous Peoples,” she said. “This will put Indigenous Peoples who are still practicing traditional farming at risk from criminalization. My biggest concern is the potential transfer of the burden of legal liability from the forest-burning corporation to the community. So far, we know that forest-burning corporations quite often defend themselves by blaming fires on the actions of local communities or claiming the fires originate from community lands.”

After widespread pushback, the February regulations were altered to include a clause exempting indigenous farmers from the slash and burn policies. Policymakers attributed the omission to an accidental oversight caused by “typos and formatting issues.”

Even with the February amendment, some activists say that these loose regulations are a result of undue influence from Indonesia’s plantation lobby.

“Stopping this recurring fire crisis should have been at the top of the government’s agenda since 2015,” Kiki Taufik, Global Head of Greenpeace Southeast Asia’s Indonesian forests campaign,  said in a statement. “But our findings show the reality: empty words and weak and inconsistent law enforcement against companies.”

Indonesia is the world’s primary palm oil producer. Palm oil is used in nearly all processed food and toiletry products because it is relatively inexpensive and versatile. Palm trees also produce more oil per fruit compared with olive, vegetable, or coconut oil.

Some reports suggest that since 1999, palm oil plantations in Indonesia have expanded from 3.9 million hectares to 14.6 million in 2019. This massive jump means that millions of hectares have been destroyed to make way for this ballooning industry.

These alarming statistics raise a vital question: what can be done about harmful slash and burn practices?

There are a number of innovative solutions to deter harmful slash and burn and facilitate regrowth, including utilizing natural compost methods and combining agriculture and animal husbandry, which would allow the animals to fertilize the field. Some Sumatran farmers are turning away from palm oil altogether and seeking out less harmful crops such as chilis that don’t deplete the soil’s nutrients as quickly. Other Indonesian farmers are exploring paludiculture, where crops are produced in wet marshy soil to prevent accidental fires. This is particularly effective in Indonesia’s peat-filled grasslands, which can be dangerously flammable.

Researchers have also pioneered a new planting method called alley-cropping, which involves creating alleyways of nutrient-rich, fast-growing Inga trees lined in rows to prevent weed growth that would need to be burned. The Inga’s leaves fall and decompose, leaving a layer of ultra-rich nutrients, and the roots provide soil stability. During planting seasons, the trees are trimmed, crops are planted, and the cycle repeats—with no need for fire.

Additionally, some communities are now turning back to indigenous farming practices as a way to combat ever-worsening deforestation and forest fires, including Swidden agriculture.

Swidden agriculture is also known as “shifting cultivation,” and although it uses similar techniques to slash and burn—fire is used to clear fields for cultivation—it is done in a cyclical way, rotating between plots and facilitating their regrowth, to preserve the forest and give the land time to regenerate and flourish. Swidden cultivators also utilize safeguards like firebreaks, debris clearing, and community fire management. Through swidden agriculture, some communities have been using slash and burn methods in the same forests for centuries while still prioritizing the ecosystem’s health.

Indigenous slash and burn techniques have long been derided as backward, with one 1957 UN report even calling it “the most serious land-use problem in the tropical world.” However, much of this language is rooted in neocolonial attitudes and racist assumptions. This mindset is why governments worldwide have often favoured reactive policies barring all fire usage in environmental contexts, which has erased and barred a lot of local and traditional wisdom around agriculture.

However, these prejudices are shifting as many countries realize that indigenous strategies are often the most effective method to fight or control forest fires. A 2006 UN report proposed reframing shifting cultivators as “forest planters and managers,” and a 2015 UN report recognized the inherent racism that has coloured policymakers' perceptions of shifting cultivation.

“The popular prejudices against shifting cultivation common in Asian countries are conflated with other negative attributes ascribed to indigenous peoples throughout the region: that they are backward, primitive, a hindrance to national progress, disloyal to and a security problem for the state, etc. … Arguments brought forward against this form of land use – that it is an economically inefficient and ecologically harmful practice – have been proven inaccurate or outright wrong.”

In fact, some researchers described shifting agriculture as “an ideal solution for agriculture in the humid tropics”.

As the climate crisis worsens and more communities face rampant forest fires, tighter corporate regulation and greater engagement with indigenous knowledge may be our best shot at preserving the planet’s precious biodiversity.