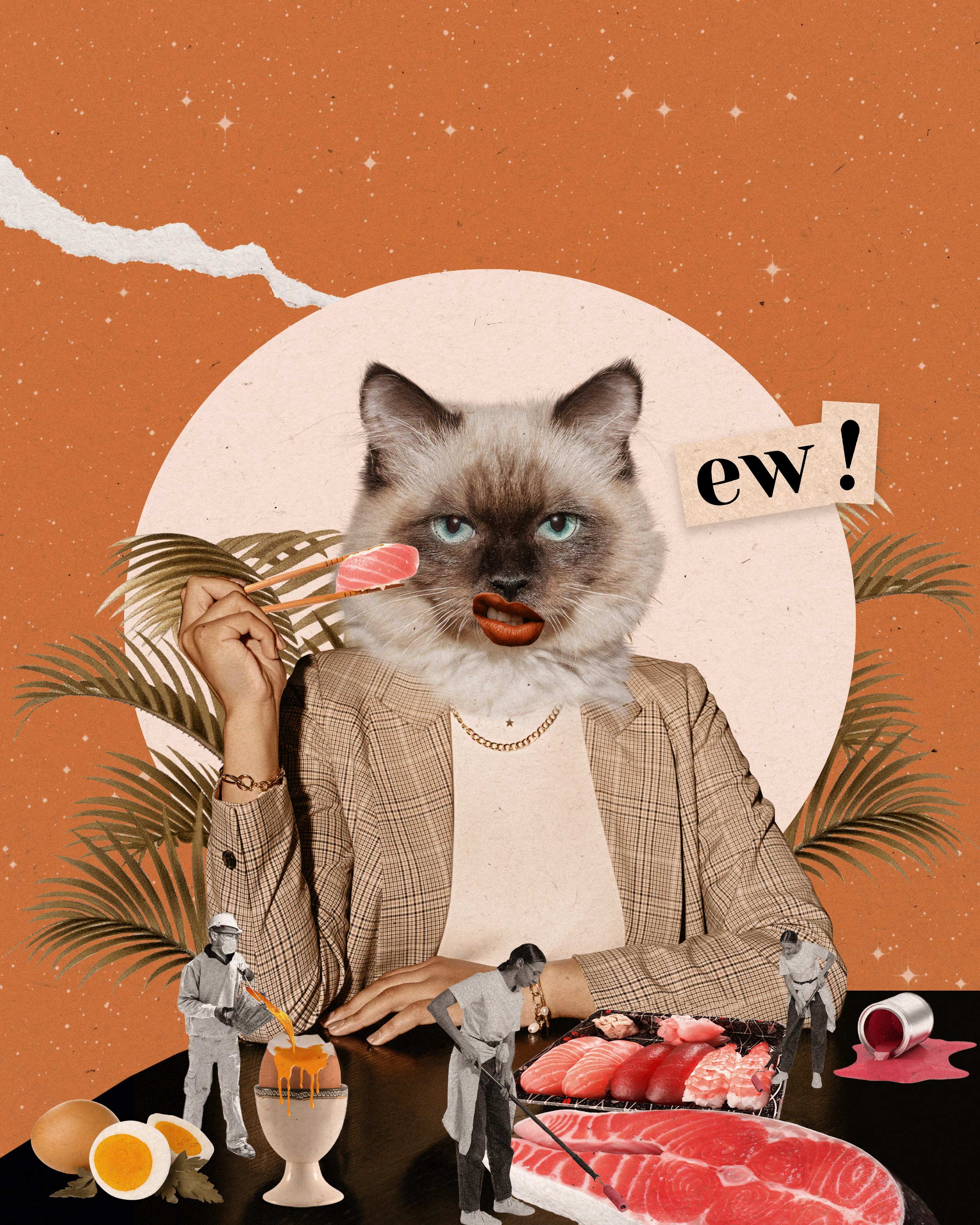 Digital Collage Artist:
Gabriela Borges
Producers are dying foods their natural colour to mask existential changes in their breeding and growing environments. Stabilizing our foods’ colours hijacks our ability to even work out anything has changed
by
Lily Wakeley
10/19/2022

There are some things we take at face value. They are ingrained in our shared consciousness and the language we use to make sense of the world. Childhood poems tell us that roses are red and violets are blue. We know that egg yolks are golden yellow and salmon is salmon. But what if you learned that neither is true?

The activists Daniel Fernández Pascual and Alon Schwabe are done taking things at face value. In Climavore, a project of their art collective Cooking Sections, they investigate the relationship between agriculture and the climate crisis. In part, this project deconstructs the fact that most of the salmon we eat is farmed in the sea and on land.

In farms, fish live off processed feed and they are starved of their native, wild diets, which consist of small crustaceans, in particular krill and baby lobster. These small invertebrates are enriched with pigments called carotenoids, which are yellow-red-orange in colour. Carotenoids give salmon its distinctive and even category-defining hue. If salmon don’t eat these carotenoid-rich crustaceans, they would cease to be salmon and instead become grey.

Except, as consumers we often don’t know as much. These are the things we take at face value. There is no valid reason to do otherwise. Salmon becomes grey and no longer salmon, and no one really knows that it happened.

Salmon’s grey, salmon-dyed flesh hides the ugly truth behind what is one of the UK’s biggest food exports.

Carotenoids are plant pigments which animals and people cannot produce, but we absorb through brightly coloured foods such as carrots and krill, or alternatively through artificial dyes. Farmed salmon are pumped with replica colour pellets to match the so-called ‘SalmoFan’ colour swatch, which correlates to the range of pink to red tones that different markets across the globe desire: more red, tuna-like tones for East Asia and more pink tones for Europe.

Colour has always been a way to interpret and understand food: we’ve learned that the purple of a bruising banana, spottings of lime white mould on bread, or the deep blush of a tomato all signify very different things. The deviation of salmon from its expected colour suggests that its breeding environment has changed. Artificially dying it however prevents us from thinking otherwise.

By distorting our foods to disguise these changes, artificial colouring obscures the huge shifts occurring in our food systems — which we have little reason to suspect by looking at our food because it never changes. Hidden and out of sight, dying our foods their natural colours is a scandal and a cover-up.

Salmon’s grey, salmon-dyed flesh hides the ugly truth behind what is one of the UK’s biggest food exports, which is worth more than £1 billion (US$1.13 billion) a year to the UK economy. Hundreds of thousands of tonnes of salmon are farmed in pens where they are fed medicines which are supposed to kill disease and prevent lice infestations, but which BBC Panorama found are instead eating “salmon alive”.

These enclosures excrete thousands of tonnes of waste into the surrounding waters, contaminating and changing the ecology of inshore sea lochs. Not only does this kill wild salmon, but it also kills the crustaceans that salmon eat and which give them their salmon colour.

But salmon isn't alone in getting the colour treatment.

We have come to expect the yolk of ‘healthy’ chicken eggs to be golden and that insipid pale yolks are a tell-tale sign of the hen’s poor health. Although this belief is a misconception — the abstracted shade of yolk does not in fact indicate anything about an egg’s nutritional value — the colour of an egg’s yolk does tell us about the carotenoid levels in the hen’s diet. There are about 700 different natural carotenoids that have this effect in nature, but only five of which are used in commercial chicken rearing. This shift in production means egg-producing hens are now fed with orange dyes and organically raised chickens eat marigold petals.

During hot and humid nights, oranges ripened so quickly they were edible while they were still green. Today, oranges are still often dyed the shade 'citrus red #2’ to sustain the fruit’s nominal orange-ness.

This blinkered focus on colour creates a reductive and short-circuited association with health. In reality there is a more complicated correlation with the conditions in which the chickens are raised and how this manifests in the aesthetic and nutritional value of their eggs. Rowan Green from the British organic box scheme Riverford argues that the most useful indicator would in fact be how the colour of yolk varies over time: “Subtle changes in yolk colour throughout the year indicate that the hens have access to outdoor food sources which will vary with seasonal availability of insects and seeds.”

The orange, too, like salmon, is a fruit and a colour expectation. Cooking Sections put it frankly: “If an orange is not orange, it is no orange.” The duo trace the moment from which the fruit lent its name to the colour. It took several centuries for the term to evolve from ‘yellow-red’ to that of the referential ‘orange’.

By 1893, Florida was producing five million boxes of fruit each year. During hot and humid nights, oranges ripened so quickly they were edible while they were still green. Today, oranges are still often dyed the shade 'citrus red #2’ to sustain the fruit’s nominal orange-ness, even though the International Agency for Research on Cancer says the dye is “possibly carcinogenic to humans.” More than a century of dying oranges reveals the extent to which colour, produce and consumer expectations are so enmeshed.

Even the iconic orange of Cheddar cheese should fall under suspicion. Cows in the village of Cheddar, in England’s south west and from where Cheddar takes its name, long grazed on the beta-carotene-rich grasses which produced an orange-yellow pigmented milk. The special thing about the off-white cheese these cows produced became its colour more so than its taste. In the 17th century, however, cheesemakers started to skim the layer of cream from the milk to use in the more lucrative butter production. What was left was a white, low-fat cheese which they started to dye with things like saffron, marigold and carrot juice. Like Pavlov's dog, the colour association deceived consumers of Cheddar’s unchanged state. Centuries on, we still expect cheddar to be orange.

Dying foods their ‘natural’ colours doesn’t merely mask a changed reality but it also limits our ability to work it out for ourselves, to read cues and find out what they mean. Food producers place a temporary hold on our intuition by keeping this small part of our reality fixed when its foundations have changed. Dyes preserve the last vestiges of what we believe about our food’s provenance. Even for those who think critically about food, it becomes unreasonably hard to judge the ‘authenticity’ or ‘goodness’ of products. Perhaps it is no wonder that in this context we continue to cling on to indicators such as colour. But it is also this context that creates a breeding ground for systems of certification, modification and exploitation, which in turn creates a market of corrupted authenticity.

Denying that salmon is now grey and altering the natural colour of egg yolks suggests the extent to which we’re now dissociated from nature and its changing realities — the food system thinks it can uncouple the food on our plates from its environment. As a result, it solidifies the aesthetics of our food even though they no longer relate to the landscapes from which they (should) have emerged. As the era of ‘terroir’ follows the era of ‘you are what you eat’, our food seems to be as amorphous as the farms and ecologies from which it sprouts.

As the climate crisis escalates, the question of colour dying will become ever more urgent. The world’s rising temperatures and climatic changes such as increased droughts, more intense but less frequent rainfall, and the changing pattern of the seasons will irrevocably transform agriculture everywhere, and our foods in turn will change with them.

The continuing denial of these cataclysmic realities in part stems from our tendency to cling onto our nostalgic ideas about nature, which in reality no longer exist. Would we as a species have been so passive and complacent about climate change for so long, if the food on our plates was transforming at the same rate as our planet? If we were able to see the yolk’s colour variation throughout the year, as suggested by Rowan Green?

The scandal of dying ultimately distracts from a far greater, imminent, and existential scandal, in which entire food systems and ways of eating are threatened by collapse.

Homogeneity and sameness reign supreme in supermarkets, for colour and for shape. Companies like Oddbox and Wonky Food Company repackage the fruit and vegetables that deviate from these standards as charmingly different in their aesthetic but the same in their taste and quality. But the fact that these companies exist indicates the scale of the problem: The companies selling our food want the food that looks right, and it is up to others to figure out what to do with the food that doesn’t.

Cooking Sections asks, how do we seriously rethink food systems as the climate changes? For the duo, the answer lies in shifting our diets entirely and changing the kinds of food we grow, like drought-proof vegetables. Following the exhibition at the Tate, the art collective successfully lobbied the gallery to cease serving farmed salmon and is working with the gallery to promote and explore alternatives, such as regenerative aquaculture. Cooking Sections, like many other activist groups, is contemplating the future of our food and farming to adapt to the climate crisis and reduce the impact of food production and agriculture on the planet.

But as long as practices like injecting food with artificial colours continue, efforts such as these can only achieve so much. The scandal of dying ultimately distracts from a far greater, imminent, and existential scandal, in which entire food systems and ways of eating are threatened by collapse. What would happen if food producers didn’t have recourse to dye their food?

Dyes may mask the reality of our foods, but masks are there to be ripped off. Consumers shouldn’t be conned; they should be trusted. Colour — one of the most exciting, evocative elements of our relationship with food — has been complicit in scandal. It also offers us a way to make amends.