No items found.
Product is not available in this quantity.
Booze
Canada’s Latest David and Goliath Story
In 2017, the Yukon Liquor Corporation began placing warning labels on all alcohol products sold in the territory. Yet, in a matter of weeks, Big Alcohol dealt the project a potentially fatal blow.
Graeme Carey
2/19/2018 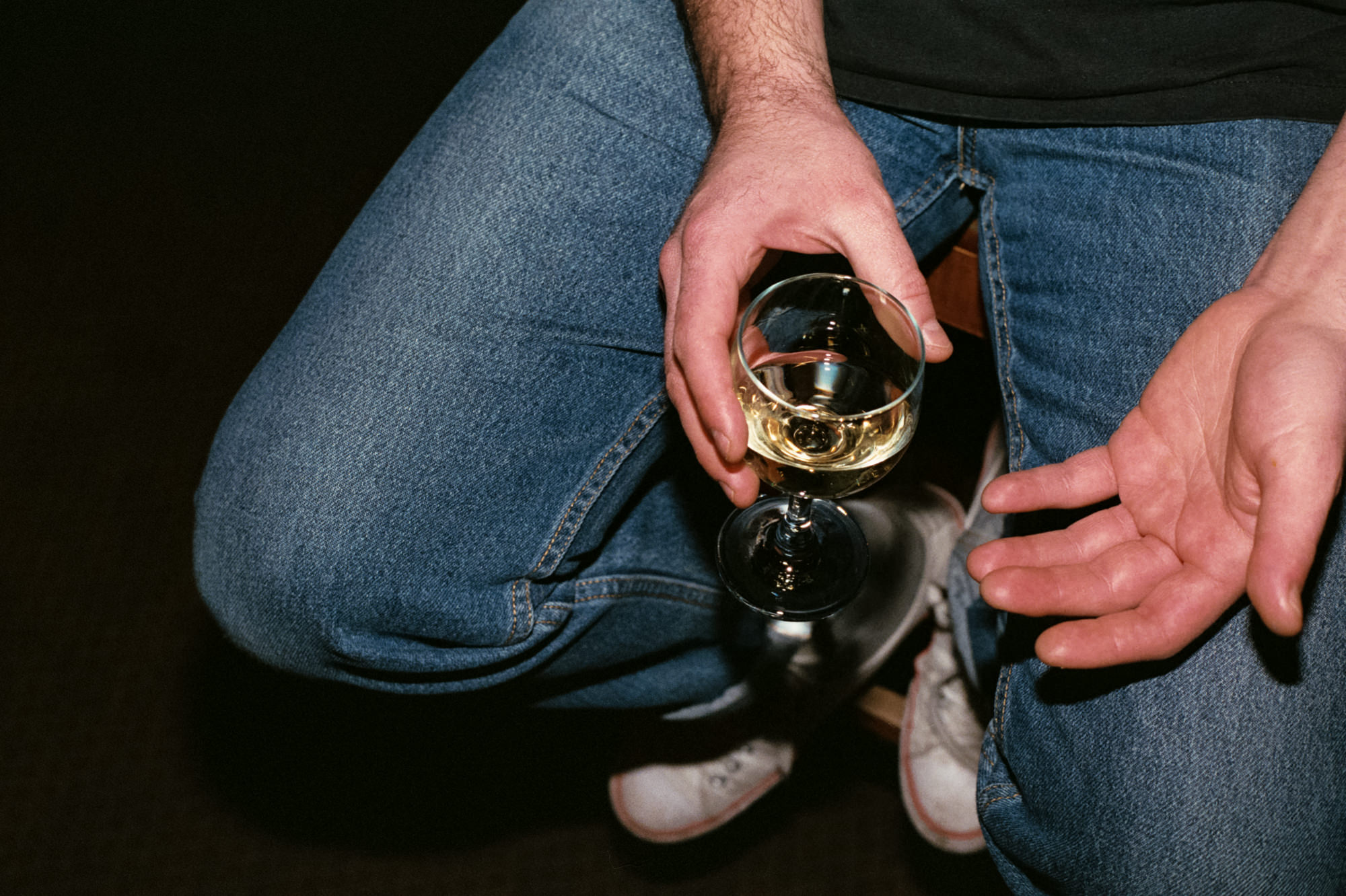 For much of the twentieth century, Canada’s health representatives faced off against a Goliath of industry: Big Tobacco.

Despite the odds, in 1988 David was able to fell Goliath and his deep pockets using only a sling and stone’s worth of funds. His victory song came in the form of warning labels, which were plastered on tobacco products throughout the country, leading to greater public awareness regarding the carcinogenic properties of cigarettes and a significant decrease in smoking rates.

Decades later, Goliath has resurrected in the form of another giant of industry: Big Alcohol.

In November 2017, as part of a Health Canada research project, the Yukon Liquor Corporation began placing warning labels on all alcohol products sold in the territory, informing customers of the link between alcohol and cancer.

Yet in a matter of weeks, David was dealt a potentially fatal blow. Facing pushback from Big Alcohol, the labelling initiative was brought to a halt, prompting what could become the next big battle between public health and commercial industry in Canada.

Due to the alcohol industry’s response, we won’t know the results of the Yukon labelling initiative. But given the similarities between this case and Big Tobacco, we might be able to predict where this fight is headed.

Support for tobacco control was expressed in Parliament as far back as 1903, Physicians for a Smoke-Free Canada notes, and was brought up again in 1971 with the introduction of Bill C-248, which sought to ban advertising for tobacco products. In both cases, however, Big Tobacco was able to walk away relatively unscathed, thanks to its influence in government.

“The lesson learned by the tobacco industry was that they need only lobby the government (Cabinet Ministers) to do their will,” writes Neil Collishaw in History of Tobacco Control in Canada. “The government would then lead Parliament to do their bidding.”

The fight continued throughout the ’70s, which Collishaw calls the “dark days” of tobacco control, when programs that promoted education about the dangers of smoking were cut back and cigarette consumption for the average adult remained at a relatively high 3,700-3,900 cigarettes per year.

It wasn’t until the late ’80s that one of David’s stones landed, in the form of the Tobacco Products Control Act, which stated that all tobacco sold in Canada had to be accompanied by a warning message.

But the fight wasn’t over just yet. Since 1988, Collishaw notes, the tobacco industry clashed with the government over tobacco control laws. Finally, in 2000, David landed a decisive blow, this time in the form of the Tobacco Act, as Canada doubled down on its warning messages by becoming the first country in the world to put graphic photos on cigarette packages. Partly as a result, tobacco consumption has seen a steady decline in Canada, from 2,200 cigarettes per adult in 1996 to 1,700 in 2002, proving that warning messages work. And the research confirms it. For instance, a 2013 study by Tobacco Control found that the adoption of graphic warning labels led to a 12.1 per cent to 19.6 per cent reduction in smoking rates in Canada.

While alcohol may not be as deadly as cigarettes (nearly 1 in 5 deaths in Canada are caused by smoking each year), it still poses a serious threat to national health. In fact, alcohol is one of the biggest risk factors for disease in Canada, and the single biggest health risk factor for those among the ages of 15 to 49. Alcohol was linked to over 5,000 deaths in Canada in 2015, and led to another 77,000 hospitalizations in 2016. Further, alcohol, like tobacco, has been identified as one of the main causes of preventable cancers.

Alcohol is one of the biggest risk factors for disease in Canada, and the single biggest health risk factor for those among the ages of 15 to 49. Alcohol was linked to over 5,000 deaths in Canada in 2015, and led to another 77,000 hospitalizations in 2016.

As Public Health Ontario scientist Dr. Erin Hobin points out, 80 per cent of adults in Canada consume alcohol, yet awareness of the link between alcohol and cancer is low. Meanwhile, less than 18 per cent of Canadians aged 12 and older smoke, yet according to Statistics Canada 96 per cent of Canadians are aware of the risks associated with smoking. It is likely that the difference between the two is warning messages. Canadians are bombarded with graphic warning labels whenever they go to buy cigarettes, while alcohol products remain label-free.

Canadians are not unfamiliar with the risks associated with drinking alcohol, but are they aware of all the risks?

“Fewer than 30 per cent of Canadian adults are aware that drinking alcohol, even small amounts of alcohol, can cause cancer,” says Hobin, who led the labelling initiative, which was part of a larger project in collaboration with the University of Victoria.

More than just informing the public about the dangers of drinking, the initiative, which was backed by Yukon’s chief medical officer of health, sought to support consumers in making more informed and safer alcohol choices.

“Labels can provide new and potentially useful information at key points of contact - when consumers are buying alcohol in the liquor store and when they are pouring or drinking alcohol,” says Hobin. “Exposing consumers to labels at these key times may influence them to rethink how much and how often they are drinking.”

The plan was to start in Yukon and potentially introduce the labels to the rest of the country, should the initiative prove successful. In that sense, Yukon would be an experiment. And it was a perfect place to start, since drinking rates in the territory are higher than most of Canada. According to a 2015 Yukon Health Status Report, 35 per cent of Yukon men are considered heavy drinkers (10 per cent higher than the rest of the country), while 28 per cent of women are considered heavy drinkers (roughly double the national average).

But the experiment would prove to be a false start, as Big Alcohol reared its Goliathan head to bring a premature end to the labelling initiative by threatening legal action. Further, alcohol, like tobacco, has been identified as one of the main causes of preventable cancers. So why the pushback? If tobacco comes with a warning, shouldn’t alcohol as well?

Yukon Liquor Corporation spokesperson Patch Groenewegen chose not to name the national brand owners who came forward to complain about the labels, but she did outline their concerns, including “legislative authority, label placement and trademark infringement, defamation and damages related to messages on labels affixed to brand-owner products without consent.”

In particular, the companies took issue with the message linking alcohol and cancer, even though, as Hobin points out, “there is strong scientific evidence indicating a causal relationship between alcohol consumption and at least seven different types of cancer, including breast and colon cancer.” On this matter, the World Health Organization’s International Agency for Research on Cancer, World Cancer Research Fund, and the American Institute for Clinical Oncology all agree.

Globe and Mail health reporter André Picard, believe that, at the end of the day, the alcohol industry is wholly concerned about their bottom line – not legislative authority or the accuracy of the labels’ messages.

“What the alcohol industry really fears is that other provinces and territories will follow suit on the labelling initiative, and start taking the harms of alcohol more seriously,” writes Picard, who called the alcohol industry’s pushback “shameful.”

In other words, for Big Alcohol, liquor sales take priority over public health.

In other words, for Big Alcohol, liquor sales take priority over public health.

As of now, the labelling initiative has been put on hiatus while the Yukon Liquor Corporation consults with stakeholders affected by the study, but that doesn’t mean proponents of alcohol controls have given up all together.

“We are disappointed that the project is on hold but we are continuing conversations with the Yukon Government to decide if and how best to move forward with the research,” says Hobin.

Should the project be revisited, she acknowledges that it would have to go beyond text-only messages in order to truly change consumer behaviours.

Studies on the effectiveness of tobacco warning labels have found that the more graphic and emotionally evocative the messages, the better they are at deterring people from smoking. Hobin also points out that, while they can be effective tools for increasing consumer awareness of health effects, warning labels have little impact on actual drinking behaviours.

“It is likely that a suite of interventions that includes labels plus interventions targeting the price, availability, and marketing of alcohol will be required to effectively change consumer drinking behaviours,” she says.

Before any of that can happen, Dr. Hobin and others will first have to get past Big Alcohol. If the myth of David and Goliath has taught us anything, it’s that neither will go down without a fight.