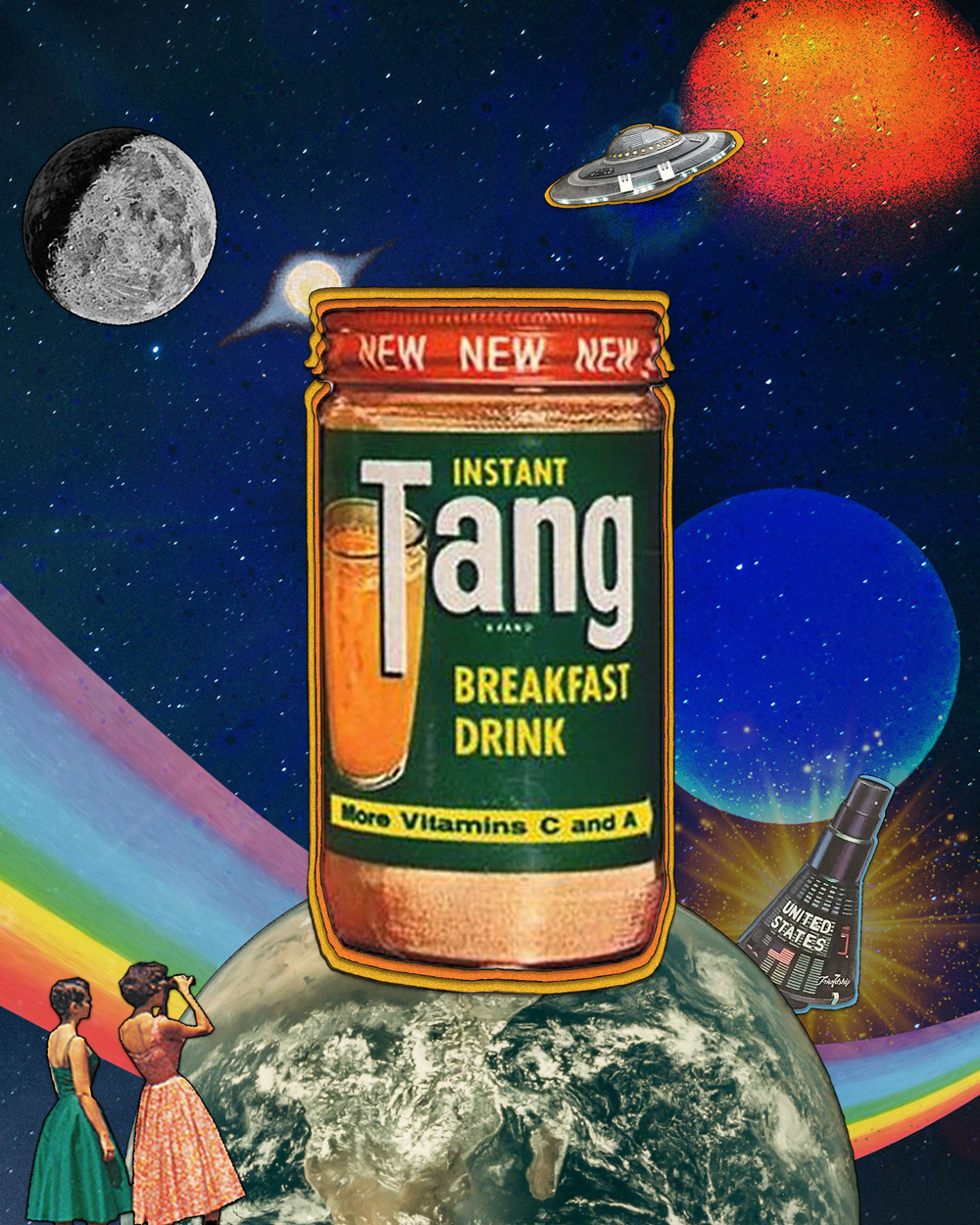 Digital Collage Artist:
Dana Fortune
Young slipped the sandwich in his pocket right before launch—it had been smuggled aboard. “What is it?” Grissom asks in flight, according to Gemini 3 manuscripts. “Corned beef sandwich,” Young replies.
by
Jonathan Shipley
8/24/2021

It is March 23, 1965, and astronauts John Young and Gus Grissom are boarding Gemini 3 for the first crewed mission in NASA’s Gemini program. Young and Grissom are to fly three low Earth orbits in their spacecraft. In John Young’s pocket, a corned beef sandwich

Young slipped the sandwich in his pocket right before launch—it had been smuggled aboard. “What is it?” Grissom asks in flight, according to Gemini 3 manuscripts. “Corned beef sandwich,” Young replies.

“Where did that come from?” Grissom asks.
“I brought it with me. Let’s see how it tastes.”
‍

They quickly put the sandwich away. It started to break up in their zero-gravity spacecraft. “Pretty good, though,” Grissom says, “if it would just hold together.”

Sandwiches aren’t allowed on board spacecraft. Not in 1965, and it’s still frowned upon to this day. Sandwich crumbs can get into filters, air systems, cooling systems, computers, and more.

“It was not a good candidate to be placed on an astronaut’s menu,” notes Margaret Weitekamp, curator for space memorabilia and science fiction at the Smithsonian National Air and Space Museum. “Nothing that crumbs. Crackers. Cookies. ...Tortillas are popular. With some peanut butter you can make a pretty good wrap.”
‍

Tortillas, M&Ms, salsa, and Indian food are all popular choices. So, too, is Italian food, since an Italian astronaut brought some up to the International Space Station. “Eating has a psychological component and giving astronauts variety and giving them things that actually taste good are important factors,” Weitekamp says.


Indeed, astronaut food has come a long way from the early manned missions of the early 1960s. Yes, there’s still Tang sent up into the heavens. The powdered orange drink is consumed by astronauts to this day, including many on the ISS.
‍

‍
But while Tang is still going up, much has changed since beef came in what looked to be a toothpaste tube and strawberry cereal would come in cube form. Astronauts on ISS even get fresh fruits and vegetables delivered to them on manned and unmanned spacecraft.

While astronaut diets continue to evolve, so do the experiments behind the food, to make sure astronauts are able to achieve the maximum health benefits from food as efficiently as possible. NASA’s Space Food Systems Laboratory at the Johnson Space Center and the Space Food Research Facility in College Station, Texas, support the production and development of flight food, menus, packaging, and food-related hardware for all of NASA’s space programs. They’re at the forefront of the future of space food

“First you have to remember, we didn’t even know if you could even eat in space,” Weitekamp says. “We only knew what our body did with food on Earth, with gravity. Not without it.” If you ate something in space what would happen when you swallowed it? As it entered your stomach? Your guts? Would it float back up? Could you absorb nutrients in space? Could you ingest anything?
‍

‍
They found out. John Glenn, in 1962, became the first American to eat and drink in space. Aboard Friendship 7 John Glenn boldly did what no one had done before—eat applesauce in zero gravity. His body worked up in space, consuming food, as it did on Earth. He could swallow. He could digest. He could eat. He could drink. Tang, by the way, was selected for the menu, too. It was also included on many subsequent Gemini flights and has been consumed on many space shuttle missions.

The Mercury program of the early 1960s looked to the military from the start for consumables, by way of their army survival rations. How could it be modified for an astronaut? Early space food included pureed food packed into aluminum tubes and sucked through a straw. It worked in giving them the necessary nutrients and energy, but it was by no means tasty.

By the Gemini and Apollo programs, freeze-dried foods became the staple and remains so to this day. Rehydrated with liquid, foods taken into space must be lightweight, compact, nutritious, and delicious. They must also be kept for long periods without refrigeration.

Astronauts need many more calories a day in space than on Earth. It’s important to pack as much of those calories and nutrients into the smallest packaging possible with the lightest weight. Neil Armstrong had bacon cubes. Buzz Aldrin had pineapple fruitcake. Michael Collins, aboard Apollo XI, had a little metal spoon to eat cereal.

Today, thanks to NASA’s space food labs, astronauts can choose from about 200 different items for their standard menu, which can be augmented with some personal choices to include commercial off-the-shelf items. There are no dedicated refrigerators or freezers for food storage in space. There is no Ben and Jerry’s ice cream circling the Earth. Foods aboard various spacecraft are stored at ambient temperature.

Fresh food is a boon to astronauts, as well. A limited supply of fresh fruits and vegetables (mostly apples and oranges) arrive regularly at ISS with each visiting vehicle. “It’s not that the ISS is far away,” Weitekamp says in supplying fresh foods to astronauts, “it’s just the duration the astronauts are away from Earth. So, if we have ideas to populate the Moon or travel to Mars, or go any vast distance for an extended period of time, we have to keep experimenting.”

NASA is always experimenting. “How do we, essentially, bring a greenhouse to another planet?” Weitekamp asks. She mentions Andy Wier’s bestselling novel (and subsequent Matt Damon movie), The Martian, as being deeply rooted in the science of feeding astronauts. In the book, a fictitious astronaut is stranded on Mars and survives by growing potatoes.

Hydroponics is the future for space food. That is the growing of plants without soil. There is lettuce currently being grown on the ISS. Not only are those lettuces nutritionally beneficial, but there are also other positive attributes.

“There are psychological benefits, just like on Earth. It’s rewarding to plant a seed and watch it grow. …There’s this powerful sense for the astronauts of self-sustainability,” Weitekamp added.
‍

Giving astronauts agency to grow, prepare, and eat their own food is an important factor. NASA is continuing to work on making equipment to refrigerate, freeze, and even bake.

There are no questions left unanswered by NASA’s space food laboratories, although there are new questions being asked every day. As astronauts continue to orbit the earth, with eyes focused on even further reaches of human endeavour, NASA is eager to continue to supply healthy, compact, lightweight, and psychologically beneficial food.

Another question they’re asking themselves: How can we make a good corned beef sandwich? John Young, for one, hungrily wants to know.