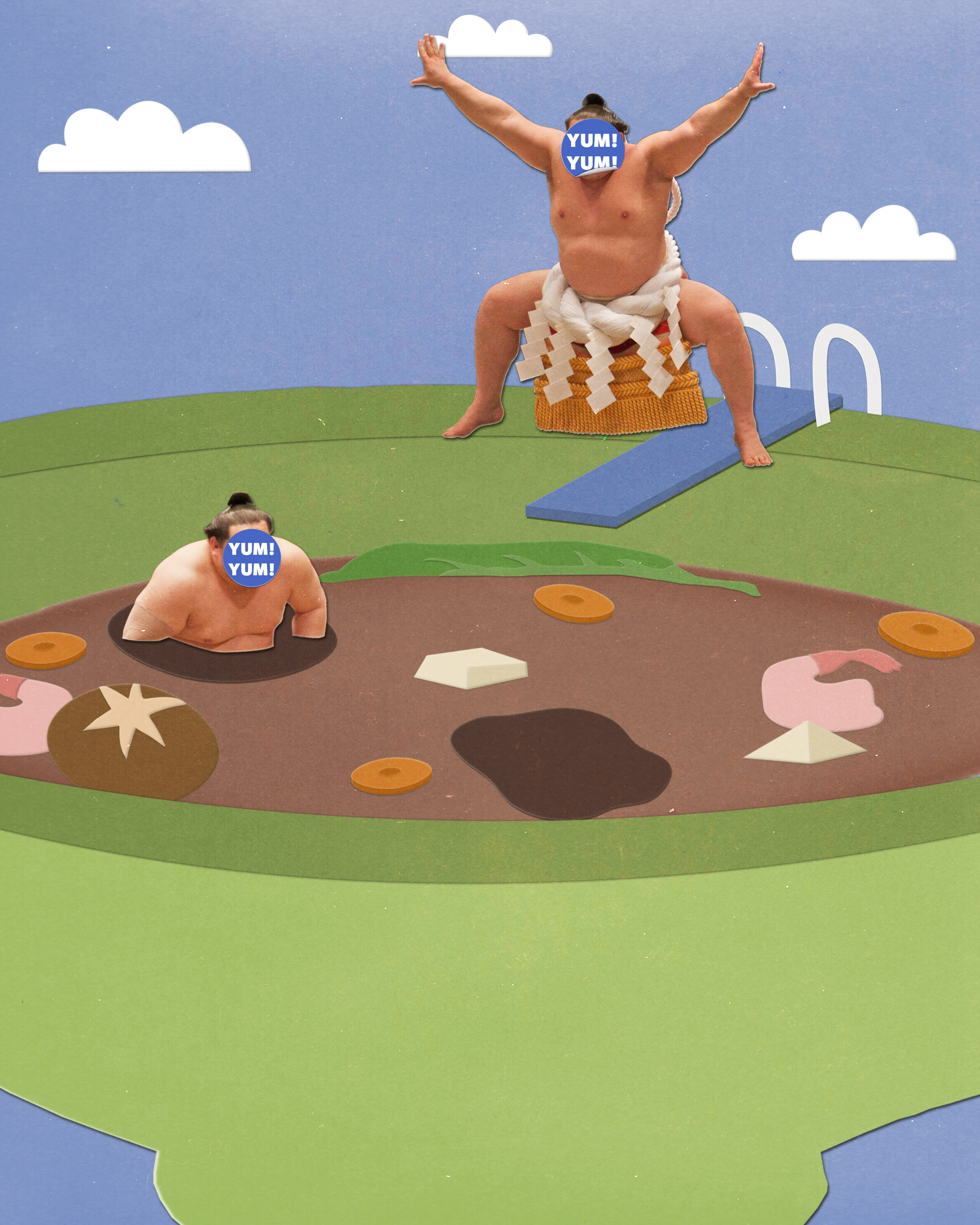 Digital Collage Artist:
Jessica Co
A look inside the sport’s nutrition — and one dish in particular — reveals athletes who are much healthier than many of us realize.
by
Jonathan Shipley
3/10/2022

When Takemikazuchi was sent to subjugate terrestrial deities on Japanese islands 2,500 years ago — and to decide who truly controlled them — it had to be settled with a sumo wrestling match. On one side of the ring was the god of thunder and conquest — Takemikazuchi. On the other side, the god of water, wind, and hunting — Takeminakata. In the ensuing mêlée, Takemikazuchi took Takeminakata’s arm and crushed it, defeating him soundly and claiming the Japanese islands for himself. A banquet was held in celebration.

Twenty-five minutes ago, Yama went to take a nap. Yama is the heaviest Japanese sumo wrestling champion ever. Weighing more than 600 pounds, he’s been a world champion multiple times during his more-than 30-year sumo wrestling career. He’s taking a nap after a banquet, of sorts. He just consumed thousands of calories with a bowl of chanko-nabe, the quintessential dish of sumo wrestlers for generations. It is also called “sumo stew.” “Chanko-nabe is very healthy, fresh, and helpful for recovery,” Yama says. “After hours of exhausting training, it’s important to digest as much nutrition as possible.”

‍
Yama wakes to sumo, eats for sumo, works at sumo, and sleeps and dreams of sumo. Yama is sumo and, like all professional sumo wrestlers, takes his diet very seriously. It’s serious business to eat often upwards of 10,000 calories a day to be at the peak of sumo performance.

Days start early at the heya. As early as 5 a.m., wrestlers wake up for chores, duties, training, and more. A heya is a training centre, or stable, where aspiring sumo wrestlers train and live. A wrestler is expected to stay with the heya from the time he joins — usually around the age of 15 — until the end of his career.

Young men who aspire for sumo greatness need to wake up early. Few succeed in becoming great. Regardless, they have dreams they want fulfilled, their heads crowned with top knots, their mawashi (belt) wrapped around their bodies, their stomachs growling.

‍
“Some wrestlers only eat two meals a day,” says John Traill, president of the Australian Sumo Federation. “Training is from 5 a.m. and is so grueling and intense that it can only be endured on an empty stomach.” The training is several hours long. “We start with one hour straight of leg lifts called shiko,” Yama says. They do about 500 of these in an hour. Each time they lift a leg up in the air to shoulder height in slow motion. They hold it there and then slowly bring it back down. “Most normal people are wiped out trying to do it a few times. We do it 500 times in a row.” Yama is anything but normal.

‍
After that, they do calisthenics, stretching, and other warm ups, before sparring sessions (sometimes 50 matches against one person) and then hitting practice. With butsukari, one wrestler takes on the role of a football “sled” and gets pushed repeatedly by another wrestler. “This helps with our defence and offensive training,” Yama says.

This grueling training hungers big athletes and makes them thirsty, too. A sumo wrestler can lose ten to 15 pounds of sweat alone in one morning’s workout. The average sumo wrestler is around 6’1” and 325 pounds. Yama is 6’4” and 600 pounds. To fuel a body that size, doing the workout that his body can do, is no small feat.

Enter a steaming pot of chanko-nabe. There is no established set of ingredients. It’s just a copious amount of food, with as much nutrition as possible in it. “On its own, chanko-nabe is very nutritious,” Traill says. “Contrary to popular belief, chanko isn’t intrinsically fattening as it only contains extremely healthy ingredients. Any fat that rises to the top of the broth is quickly skimmed off.” Each sumo stable has their own signature recipe which takes advantage of the freshest local and seasonal produce. “It’s best to be in the stable with a grand champion,” Traill says, “because they receive a fabulous array of prizes for winning a tournament including their own weight in prize cuts of the top wagyu beef.” During a tournament, superstition dictates that they avoid consuming four-legged animals such as beef or pork before a fight. Being down on all fours symbolizes a loss in the sumo ring. Best to be on two legs and eat chicken instead.

Typically, the dish contains dashi or chicken broth as a base with sake or mirin added for flavour. Immense amounts of protein are also added; beef, chicken, fish, and tofu are staples, to go with vegetables including cabbage, bok choy, daikon radish, and more. “What puts on the weight,” Traill says, “are all the accompanying side dishes with large bowls of rice.” This is all usually washed down with sake or quite a lot of beer. All that, Traill says, “is followed by a long nap to store up what I affectionately refer to as ‘potential muscle.’”

Make no mistake, sumo wrestlers eat a lot. Legendary wrestler Masashiimaru Koyo, who won more than 700 wrestling matches in a 14-year career, would eat meals that included more than four pounds of beef. “We eat bowls and bowls of this stew,” Yama says. Sometimes as many as ten bowls. The wrestler Takamisugi, a former wrestler who is now a head coach at the Tokiwayama stable, is a chanko-nabe eating legend. He once ate 65 bowls of sumo stew (consuming approximately 29 pounds of beef) in one sitting. “Even though we eat a lot of calories,” Yama says, “we make sure we eat well, avoiding junk food and sugar.” Traill cautions those who think sumo wrestlers eat like this typically. “It’s an urban myth that sumo wrestlers eat up to 20,000 calories a day. …That’s over 35 Big Macs a day. That’s highly implausible for such elite sportsmen.”

‍
Eat well, yes, these elite sportsmen do, but sumo wrestling takes a decidedly large toll on the body. In sumo wrestling, the rules are fairly simple: if any part of your body other than your feet touches the ground, or you step outside the ring, the match is over and your opponent is declared the winner. Pro sumo currently recognizes 82 “kimarite” (winning techniques). Technical expertise is key, enabling sumo wrestlers to defeat opponents who can be larger, stronger, and faster. Sumo wrestlers often rely on strength and speed to push an opponent out quickly or use balance and technique to flip, trip, or manoeuvre an opponent to the ground.
‍

That sumo ground is hallowed and has been for generations. Prehistoric cave paintings have been found that show sumo in action. It appears to have originally been a dance or ritual to pray for a good harvest. The earliest existing written record of sumo is found in the Kojiki, a book from 712. The first bout among mortals was held in 23 BC. Early bouts were violent affairs — often, to the death.

From early religious practices, sumo became a sport for royalty. Matches were carried out in the courts of emperors. From imperial courts to the masses, sumo gained popularity. It is the official sport of Japan and today’s sumo wrestlers are superstars. The average highest ranked professional sumo wrestler receives a base monthly salary of $25,000 a month. The current prize for winning a tournament in the premier sumo divisions is around $100,000.

Glory, but sacrifice, too. There is a common misconception that sumo wrestlers are obese and unhealthy. Not so. Their intense workouts keep them healthy and their diets maintain that health. “Most of this excess calorific energy gets burned at the early morning practice,” Traill says. Normally, people who are obese store a portion of their extra fat inside the abdomen — wrapping itself around the pancreas, liver, and other vital organs. It’s called visceral fat and can lead to high blood pressure, Type 2 diabetes, and heart attacks. Sumo wrestlers usually don’t suffer from these symptoms. CT scans show that sumo wrestlers rarely have much visceral fat at all. Their fat is right beneath the skin. They’ve got normal levels of triglycerides and low levels of cholesterol.

“Sumo wrestlers have very little visceral fat, which is the organ-choking hard-beer gut fat,” Traill says. Instead, outside layers of soft fats protect their organs from sometimes brutal impacts. Traill says, “The initial impact of a sumo bout has been measured as high as 13 G forces.” The scientist that measured it insists that, “this is the equivalent of hitting concrete after jumping from a 3-story building or being in a head-on car crash at approximately 40 mph.”

‍
After retirement, sumo wrestlers’ bodies begin to catch up with them. They suffer from strokes, diabetes, heart, bone, and joint problems. A sumo wrestler’s life expectancy is between 60- and 65-years old, about 20 years shorter than the life expectancy of a typical Japanese male.

“Junior apprentices actually have trouble putting on weight as they are relegated to eating leftovers once the higher ranked sumotori have had their fill,” Traill says. “As they are unsalaried, they often put noodles in the leftover broth to replace the good bits that get gobbled up.”

Gobbled up by men like Yama. The diet, Yama concurs, “is much harder for guys who are smaller, as they often force feed themselves to pack on as much weight as possible.” He continues, “I am naturally enormous, so I don’t have to work so hard at bulking up.”

How would Yama have fared in a match against Takemikazuchi? Was the god of thunder 600 pounds with hours of deliberate and rigorous training? How much chanko-nabe did the god consume? What would happen if a god wrestled a living legend? Whatever the outcome of the mighty battle, they’d bow to the victor and then bow over a bowl of stew in celebration.