No items found.
Product is not available in this quantity.
Shellfish
Nine Minutes Later
Time has changed not only how we prepare lobster, but also how we approach food.
Graeme Carey
4/16/2018 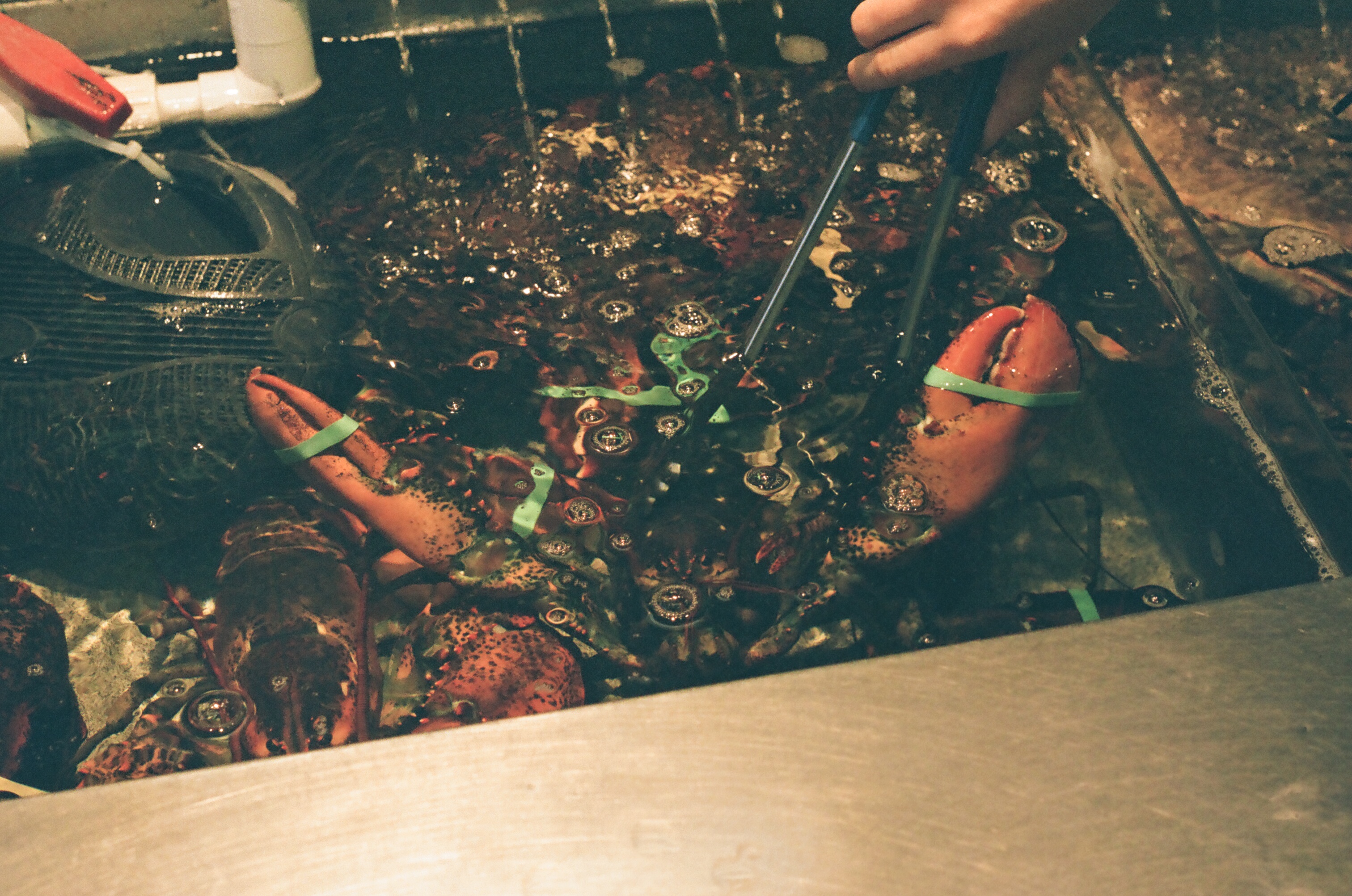 “Nine minutes later, it is all over.”

Nine minutes after placing a live lobster into a boiling pot of water, the ritual of killing this underwater beast comes to an end, assures Sabin and Jim, two guest chefs on a cooking show named PopSugar.

Dressed in plaid shirts, teaching a perky hostess in a mini-skirt the ways of seafood cuisine, these chefs argue that cooking Maine Lobster is easy and straightforward.

“Just ignore the screaming,” says Jim. “That’s just air releasing. This is probably the most humane way to do it.”

The video silences the uncomfortable sound as the hosts take advantage of those nine minutes to enjoy a glass of white wine.

“Just ignore the screaming,” says Jim. “That’s just air releasing. This is probably the most humane way to do it.”

In a twenty first century where the animals we eat are disguised as neatly packaged slabs of meat, it seems odd that a fun and perky cooking show would casually demonstrate the boiling of a live lobster. I suspect that one would have to wander down the dark alleyways of YouTube to find a cooking show that prepared a Thanksgiving dinner by first beheading a turkey.

However, times are changing.

In January 2018, Switzerland announced a ban on the practice of boiling lobsters alive, which has led to a worldwide discussion on whether or not crustaceans feel pain and therefore deserve the same rights as other animals.

The welfare of the lobster can be seen as a litmus test for the current state of animal rights at any given time. Even the most ardent meat eater can be swayed to reconsider his or her diet by a video of a cute pig squealing while being butchered, but the sight of a lobster—with its long antennae, sharp claws, and overall insecticide appearance—being dropped into hot water likely won’t bring many to tears - as the Popsugar video demonstrated.

The sight of a lobster—with its long antennae, sharp claws, and overall insecticide appearance—being dropped into hot water likely won’t bring many to tears.

In reality, it takes active consideration on the part of the consumer to care for the feelings of a being that many are repulsed by.

But with the ban in Switzerland, people are finally considering the lobster. And this indicates another trend: consumers today are more conscious than ever of what they put in their bodies, as evidenced by the dramatic increase in veganism in developed countries.

The lobster question is by no means a new one. In his 2004 essay for Gourmet entitled “Consider the Lobster,” David Foster Wallace famously asked:

“Is it all right to boil a sentient creature alive just for our gustatory pleasure? … Is the previous question irksomely PC or sentimental? What does ‘all right’ even mean in this context? Is it all just a matter of individual choice?”

Despite the articles ascension to literary fame, since then, very little action has been taken to protect the lobster. Live boiling remains the preferred method of preparation for professional and amateur chefs alike around the world.

“To ensure the freshest and most tender meat,” writes one food blog, “these crustaceans are best kept alive until right before it’s time to cook them. And to ease your conscience a bit, research indicates that these sea creatures have no central nervous system or cerebral cortex with which to register stimuli, such as pain.”

In fact, when it comes to animal welfare, animals of the sea are largely overlooked.

“There is no humane slaughter requirement for the staggering number of wild fish caught and killed at sea,” writes Peter Singer, Professor of Bioethics and famed animal rights advocate. Calling fish “the forgotten victims on our plate”, Singer argues that, unlike other animals, there’s no expectation fish be rendered unconscious before they are killed, or even that they be killed swiftly.

So what is it about fish that prevents us from feeling the same empathy towards them as we do other animals, like cows, pigs, and chickens? Is it the lack of feet, the dead eyes and puckering mouths, or the fact that they live in the water? It likely has something to do with the commonly held belief that they don’t feel pain—or as Kurt Cobain put it: “It’s okay to eat fish ’cause they don’t have any feelings”—which comforts consumers as they stuff their faces on all you can eat sushi.

So what is it about fish that prevents us from feeling the same empathy towards them as we do other animals, like cows, pigs, and chickens? Is it the lack of feet, the dead eyes and puckering mouths, or the fact that they live in the water?

While it’s true that fish don’t experience pain in quite the same way that humans do, it’s an assumption to say that they don’t feel pain at all. Humans are able to feel pain thanks to nociceptors, which send signals to the neocortex in response to harmful stimuli to tell us that something is unpleasant or potentially harmful. Fish, on the other hand, do not have a neocortex, and only bony fish have simple nociceptors. Still, there is evidence to suggest that fish react to and attempt to avoid harmful stimuli. While it can be argued that this is merely avoidance behaviour and should not be misconstructed as an ability to feel pain, can we say for sure? While it might be intuitive to assume that differences in biology might result in an inability to feel pain, it is difficult to say what exactly an animal feels or perceives. Pain, like most emotions, is a purely subjective, mental experience. We cannot access anyone's pain but our own. Therefore, it is difficult to assume how much pain a fish or a lobster can feel. As Wallace puts it:

“Even just the principles by which we can infer that others experience pain and have a legitimate interest in not feeling pain involve hard-core philosophy—metaphysics, epistemology, value theory, ethics.”

Areas that most consumers would prefer to avoid, instead opting for simple answers, all-you-can-eat sushi, and enormous lobster and crawfish festivals.

When it comes to pain, the lobster is an even trickier subject. The lobster is practically blind and deaf yet they do have an ‘exquisite tactile sense’, writers Wallace. But their underdeveloped brains, which have been compared to that of an insect, are incapable of processing pain, thus, as with fish, any response a lobster might have to painful stimuli—such as scurrying away or clinging to the side of a boiling pot of water–could be perceived as a mere non-conscious escape mechanism.

Hence, due to this underdeveloped brain, lobsters are not afforded the same protection as other animals.

Yet, studies show the issue is far from black and white. Given the possibility that lobsters do, in fact, feel pain, shouldn’t we veer on the side of caution? Perhaps it would make more sense to avoid torturing a potentially feeling animal, rather than throw caution to the wind merely to enjoy a slightly fresher dish.

Given the possibility that lobsters do, in fact, feel pain, shouldn’t we veer on the side of caution? Perhaps it would make more sense to avoid torturing a potentially feeling animal, rather than throw caution to the wind merely to enjoy a slightly fresher dish.

In this situation, the benefits do not appear to outweigh the risks.

Switzerland certainly seems to think so, which is why they recently announced that crustaceans must be stunned before they are killed, to avoid the unnecessary suffering of a sentient animal.

Switzerland’s decision, which comes after similar laws were put in place in Italy and New Zealand, is indicative of the rising prevalence of animal rights throughout the developed world. Consumers today are taking Wallace’s advice and considering what they eat. A 2017 report found that 6 per cent of Americans claim to be vegan, up from 1 per cent just three years earlier, while roughly 8 per cent of Canadians identified as vegetarian or mostly vegetarian, according to a 2016 survey. In particular, millennials are more likely to eschew meat. In 2015, a report claimed that 12 per cent of Canadians between the ages of 18-34 said that they were vegetarian or mostly vegetarian, compared to just 5 per cent of those over the age of 55, which suggests that the rate of vegetarianism and veganism will continue to grow over time.

A 2017 survey by the market research publisher Packaged Facts found that 58 per cent of Americans care more about animal welfare than they did a few years ago. Even meat eaters want to know that the steak they’re about to cut into came from a cow that lived a relatively pain-free life.

But improvements to animal rights extend beyond abstinence. A 2017 survey by the market research publisher Packaged Facts found that 58 per cent of Americans care more about animal welfare than they did a few years ago. Even meat eaters want to know that the steak they’re about to cut into came from a cow that lived a relatively pain-free life. More than ever, consumers are moving away from factory-farmed meats to supposedly more ethical options, such as organic, grass fed, cage-free, and/or free range. According to the Organic Trade Association, organic meat and poultry sales increased by more than 17 per cent in the United States in 2016, the biggest single-year growth to date. Whether or not organic truly means more ethical is another case, but at the very least it shows that people are more conscious of what they eat, not just for their own health but also for the health of animals.

The first step towards enacting change requires awareness—or, as David Foster Wallace puts it, consideration. The fact that consumers are now considering animals like the lobster, which only a decade ago went largely unnoticed, is a sign that such awareness is taking place. Of course, awareness on its own isn’t enough to make a difference, which is why Switzerland’s decision to ban the practice of boiling lobsters alive marks real change.