ISSUE
12
-
Never eat a nugget: How fast food warped our sense of what’s good and bad 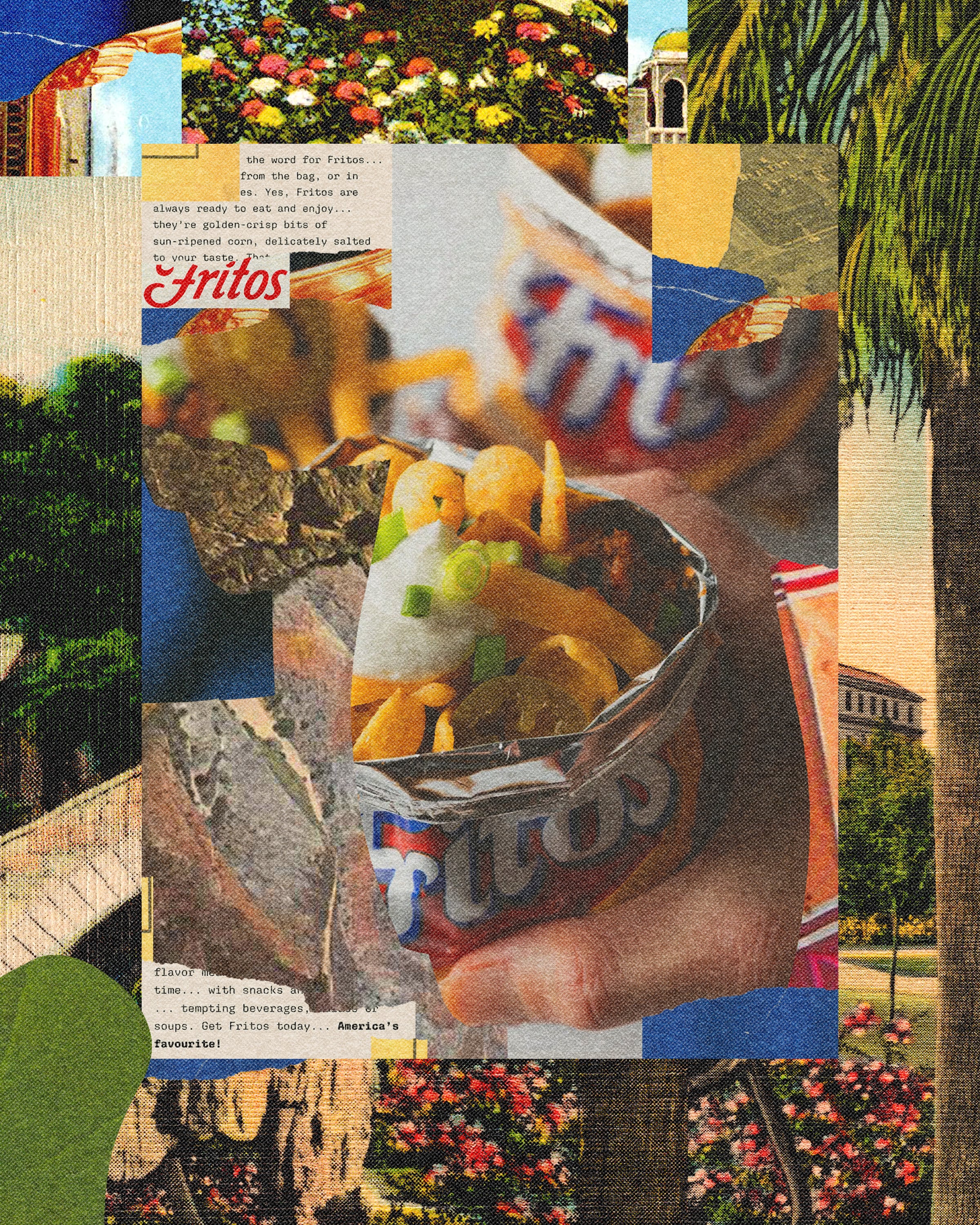 Digital Collage Artist:
Toni Hearn
The nutritional harm caused by ultraprocessed grub inspired a generation of disparate voices to moralize what we eat. Food Neutrality may offer us a new way of relating with food, but have we overcomplicated what we eat?
by
Josh Skinner
12/13/2022

There is much about food and the world right now that has me nostalgic for Anthony Bourdain.

Nearly a decade ago, the late and possibly last universally respected guy on TV ate Frito Pie and maligned it as feeling like “warm crap in a bag.” And despite slandering the synthetic stuffed pepper into oblivion, Bourdain insisted that he liked it. He was at once a food snob and an ally to all classes. He believed that food belonged to all and that food should not be a site of moral approbation. Food culture struggles without him.

But we shouldn’t forget that when someone cooked and served him food for television broadcast, he turned up his nose and out snot his famous fighting words. Insulting someone’s homecooked food with unsanitary language is wrong but in doing so he betrayed an authentic attitude towards food. That we should leave our preconceptions at the door and value the food. Don’t moralize your meal.

I yearn for him now because food snobs today aren’t like that — they’re just fucking snobs. They work to oppose bad food in all its forms wherever they find it. However they choose to conceive of Bad food, you can be sure as shrimp that it’s Bad, and there’s no room for mercy.

The more malignant forms of food snobbery are far more antisocial and unethical.

Over the past decade, Jamie Oliver has perhaps best exemplified the moderate wing of the puritan movement. He’s taken the fight to processed food — focusing venomously on chicken nuggets in particular — to address obesity levels which have risen sharply over the past two decades. His deal is simple: processed food is bad, and eating more natural food will make you and your body more natural (i.e., healthy).

Oliver started out as a chef, rising to fame on TV and expanding his empire through his popular cookbooks and unsuccessful restaurants. More recently he has campaigned against the abysmal state of food in Britain’s schools, which spurred the British government to pledge more funding to the failing system. Despite getting more money into the system and improving awareness, obesity rates in Britain continue to rise and school meals are no better either: England soccer player Marcus Rashford has campaigned passionately against the government’s failure to provide school meals for children in poverty. Jamie Oliver’s dreams are likely still haunted by chicken nuggets marching fascistically into the mouths of children.

The more malignant forms of food snobbery are far more antisocial and unethical. These food snobs define themselves in opposition to the global food industrial complex. (I mean, who doesn’t now? I do. You probably do.) Their solution to the problem is to put up walls, set up patreons and profit off of those looking to escape the evils of Oreos and TV dinners. The most grotesque of them all is the Liver King, a sentient leaking battery.

The Liver King, among dozens of other raw meat “nutritionists”, makes his money by selling snake oil.

The Liver King built a massive online following in an astonishingly short amount of time. He did so by looking like this, which he achieved by only eating animal testicles, livers and other assorted organs. To his credit he does season all of his tasty morsels with lemon zest and pink himalayan salt. So it is healthy.

Like Jamie Oliver’s, the Liver King’s message is that it is healthier for us if food we eat returns to a more natural state — only the guy tucking into “wild caught fish eggs” has probably taken it a little too far, all the way back to our ‘ancestors’. (Take that, processed food.)

The Liver King, among dozens of other raw meat “nutritionists”, makes his money by selling snake oil. Converts to his cult buy his ground animal stuff supplements for heinous prices. The key demographic for King Liver is lonely men who are desperate to not be the most repulsive person in the room. Unfortunately for them eating a raw cow heart coated in Himalayan salt in front of your crush only accelerates the rate at which your date heads for the nearest exit.

There are others, too.

Mikhaila Peterson, the daughter of the sobbing dark speculator Jordan Peterson, pushes a carnivore diet called The Lion Diet. In a stunning show of restraint, she allows her simps to cook their meat before they eat it. The Raw Egg Nationalist is exactly who you think he is, a radicalized racist dude on the internet who wrote that chugging down raw chicken babies will defeat the Jewish coded globalists in his hit book “Raw Egg Nationalism.”

To the surprise of nobody, Liver King is a fraud in the plainest terms. His body does not result from slurping down lemon zest livers but the US$10,000 that he spends on steroids and human growth hormone. (The diet he pushed was only ‘ancestral’ to the extent that it was largely illiterate.)

As long as food corporations continue pushing thoughtless slop en masse, food snobs will always have an unlimited supply of (mostly) men to indoctrinate into their cult. But dissatisfaction with the foods you feel are accessible to you does not necessarily have to lead to you into the roided arms of a Tik Tok tale teller.

There is an emerging field of study that seeks to transcend the binary between good and bad food, the binary that provides the fodder for food snobs to attract more acolytes. Food Neutrality positions itself against diet culture to help people to heal from disordered eating. It uses emancipatory language and it is gaining traction, even among food corporations.

Food Neutrality seeks to destigmatize the choices people make about their diet. It focuses particularly on eliminating a binary between “good” and “bad” food choices. The only way you can consider food to be bad is if the food is mouldy, poisonous, or contains something you’re allergic to. In this way of thinking, a doughnut and a mango are nutritionally and morally indistinguishable because they both have the same number of calories and grams of sugar. For adherents to Food Neutrality, for food to be bad it must have the intention to kill. You should be able to make your food choices free from shame and the threat of death.

This framework opposes food snobbery, for which the sole purpose is to define the line between good and bad. How does Liver King push his “Honor” supplements to disaffected young men if there isn’t a war being waged on our bodies?

It’s healthy to view food as food and not as a referendum on your soul, on whether it’s considered “good for you” or not. What’s troubling is large companies like Mondelez, who produce Oreos, embracing this emancipatory language to actively market their products as not bad for you.

In 2016, Mondelez hired Dr. Kera Nyemb-Diop, a food neutrality theorist and senior scientist in its nutrition and ingredient research. On Instagram and through her tailored coaching program, Nyemb-Diop educates black women on how to decolonize their plates, helping them to unlearn white standards of beauty and health, which can lead to unhealthy relationships with food, in order to find their own equilibrium.

Unlike the food snobs, Food Neutrality aims to give people the tools to make their own informed decisions about their food, free from restrictive and limiting standards. It rejects a spectrum that would place bad ultraprocessed fast food on one side and pure ideas of goodness on the other.

But like Oliver and the Liver King, Food Neutrality does actually still tell you how to think and in many cases what to think. In Nyemb-Diop’s telling, you don’t need to think too hard over whether to go with some doughnuts or oatmeal before starting your day, even though one of those is clearly going to give you a better chance of maintaining your focus until lunch.

Are people really freed to make their own food choices if the folks behind Oreos and Anchor butter reckon there’s no such thing as bad food? How informed are we, if the only valid way to judge choosing between some bacon and calorically equal bananas is the chances of them causing severe and pretty immediate harm?

Food Neutrality undoubtedly gets us closer to a healthier relationship with food than blood-guzzling alt-snobs. It is definitely more realistic, empowering and fun than never eating a nugget.

But even after spending literally several minutes piecing through the positions of our food snobs, I cannot stop hankering for Bourdain, whose run-in with Frito Pie neatly summed up the way we’re overcomplicating our good food and our bad food.

Sure, he got up on his high horse, but he made sure to dismount to see the food for what it was, too. He liked his hearty, homecooked meal — one that today’s food snobs could never have enjoyed.