ISSUE
5
-
Fungus
Mycotoxins — an ever-growing risk, or not worth worrying about? 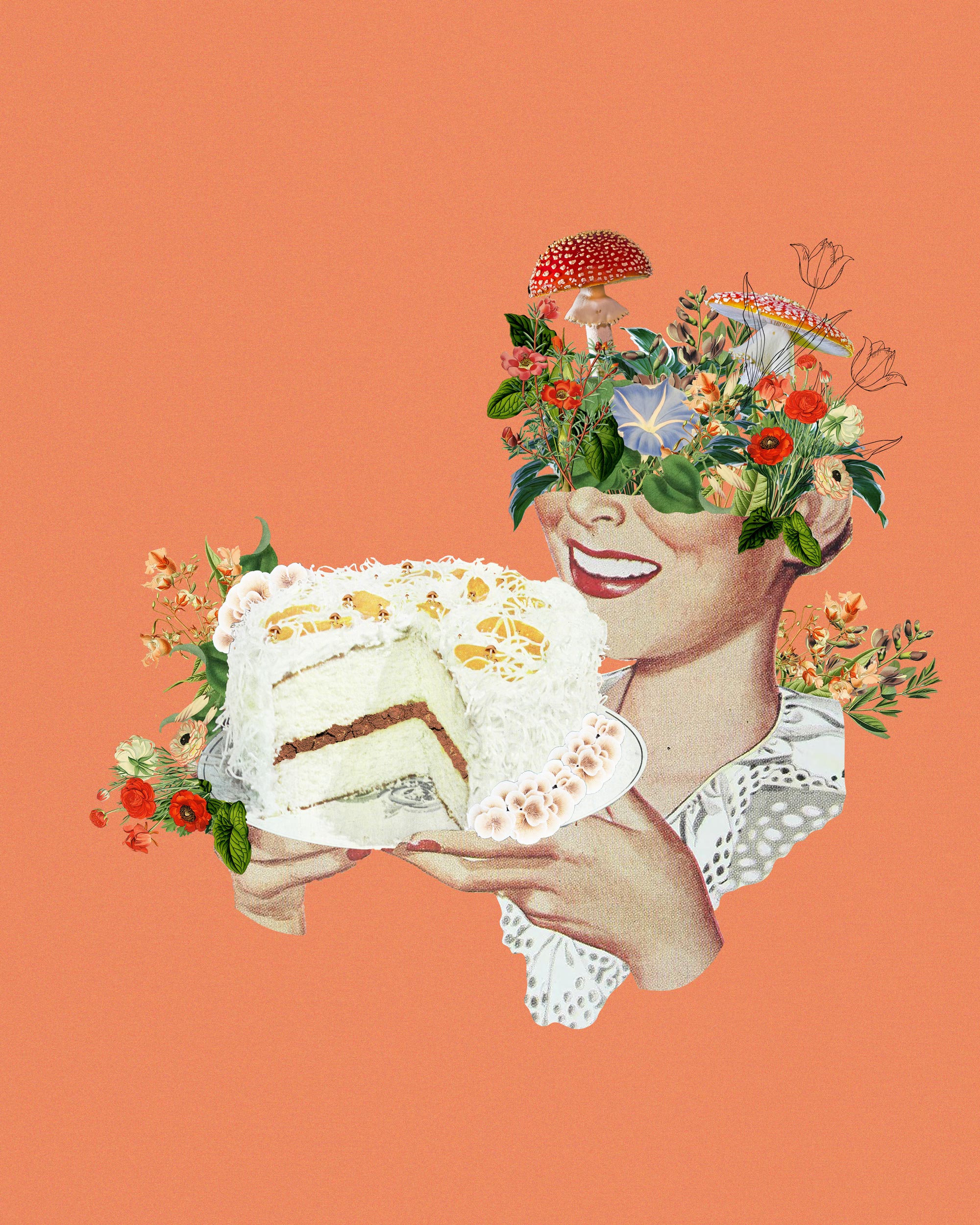 Digital Collage Artist:
Carmin Edwards
The jury is out on just how dangerous the toxins produced by mold are, but one thing is clear — the threat will keep on increasing as the climate crisis gets worse
by
Emily Monaco
2/3/2022

It is estimated that up to 25 percent of the world’s grain crops are contaminated with mycotoxins—potentially deadly toxins produced by mold. They rarely cause immediate illness, but they are a quiet killer; sustained exposure to mycotoxins can lead to immunosuppression, impaired growth, alteration of the gut microbiome, ADD, and even cancer.

Mycotoxins themselves, as their name suggests, are toxins produced by fungi. Five major groups of mycotoxins regularly occur in food, according to a 2016 research review in Cogent Food & Agriculture: deoxynivalenol, zearalenone, ochratoxin, fumonisins, and aflatoxins. Of these, aflatoxins are the most common, leading not only to important losses of grain crops such as corn, sorghum, wheat, and rice around the world, but also to illness in both humans and animals.

Mycotoxins are actually caused by two groups of fungi: those that invade before harvest, aka field fungi, and those that invade after, also known as storage fungi. These days, given the preponderance of intensive cropping and monocultures, field fungi are becoming a far more pervasive problem, according to 1999 research published in Phytopathology. Nutrition and scientific innovation firm Alltech also found that monocropping and monocultures can actually lead directly to higher levels of mycotoxins.

“If plants are stressed during the pre-harvest period, they can become infected with fungal diseases,” explains Dr. Robert Brown, MD, who notes that this has become an even bigger problem “given the changing climate resulting in unpredictable weather patterns, with droughts and floods becoming commonplace.”

Indeed, the climate crisis is a major contributing factor to the rising danger posed by mycotoxins.

“Research has demonstrated that only a slight elevation of CO2 levels will stimulate the growth of mycotoxin-producing fungi,” writes Professor Emeritus Leif Sundheim as guest editor of a special issue of the journal Toxins. (He is a professor at the Norwegian Institute of Bioeconomy Research)

“There is an increased risk for mycotoxin contamination of maize, wheat, and other small grain species, and in a changing climate, mycotoxins will contaminate new crops and new geographical areas.”

And while the authors of the previously cited 2016 study note that “mycotoxins are associated with diseased or [moldy] crops,” the reality is that mold can be “superficial” at best, hiding in plain sight.

In addition to contamination in the field, mycotoxins can also become a huge problem during food storage, especially in humid or damp climates. This can be staved off by different preventative approaches such as washing, sorting, and even chemical treatment with fungicides, or it can be preempted by drying grains chemically before storage.

One common option is glyphosate, the active ingredient in Monsanto’s Roundup (now produced by Bayer) that the WHO dubbed a probable human carcinogen in 2015. Glyphosate is frequently applied to oats, in particular, to dry them out before storage.

“Not ideal for those of us that like to try and eat ‘organic,’” notes Brown, “but it’s better than eating contaminated food.”

And grains aren’t the only contaminated food we need to worry about. Mycotoxins can also be passed from animal to human, meaning that if an animal is fed contaminated feed, derived animal products from meat to milk can pass that toxin on to humans. Indeed, the authors of the 2016 research review write that “an animal product like milk is the main source of aflatoxin contamination for human beings.”

When it comes to mycotoxin contamination in humans, there are two potential health dangers at play. The first is an acute reaction sustained by a sudden exposure to a large amount of mycotoxin, defined by a “rapid onset” and “obvious toxic response,” according to the 2016 research review authors. But chronic toxicity, characterized, they write, by “low dose exposure over a long time period,” is the toxicity that most concerns us. Instead of triggering a sudden response, it can slowly lead to health problems including cancer. And because people show no symptoms, they do little or nothing at all to reduce their exposure.

For Lisa Richards, nutritionist, author, and creator of The Candida Diet, most people in the Global North don’t need to worry too much about mycotoxin contamination.

“While it is altogether possible for mycotoxins to contaminate the foods we find on our store shelves and in our kitchens, the World Health Organization and other governing agencies have systems and protocols in place to significantly reduce the likelihood of mycotoxins being a common threat,” she explains.

“Those involved in the food chain from planting, harvesting, and production are responsible for inspecting their food and food products for mycotoxins.”

This, the 2016 research review writers say, is not true of places like Ethiopia, where there are few studies on mycotoxins and a “paucity of information” on their danger and control.

Brown agrees with Richards. Despite the seeming omnipresence of mycotoxins, he notes that “in most instances, I would assume that what you are buying from the market is safe to consume.”

But even as WHO and other organizations attempt to reduce possible exposure to mycotoxins, there’s a third element of exposure that hasn’t been given nearly enough attention: the home.

“Many people at home have some degree of food storage, whether it is in a pantry or a basement,” Brown says.

And this can be a prime location for mycotoxin contamination, especially if your food storage areas are poorly ventilated.

“Keeping the humidity down may not always be possible. There have been tremendous rains in some parts of the [the United States] over the past few years. Flooding basements have become all too common for some of us.”

A report released this summer by the Intergovernmental Panel on Climate Change indicated that heavy rains fueled by warmer air will lead to even more flooding and flash flooding (including notable recent disasters in Germany, China, Afghanistan, and the eastern U.S.). In addition to the dangers brought about by these acute disasters, the climate emergency will likely further exacerbate the risk of mycotoxin contamination.

“If you are storing foods, such as grains, pastas, and nuts, rotate your storage regularly by eating the oldest foods first,” Brown suggests. “Be sure to keep your foodstuffs in air tight, moisture proof, and rodent proof bags/containers. Importantly, if the taste of your food is a bit off … don’t eat it.”

Richards adds that one possible way of avoiding chronic, low-dose exposure to mycotoxins is by eating a varied diet. By changing what you eat on a regular basis, she explains, “you can reduce your risk of mycotoxin exposure by limiting your potential exposure.”

While according to Richards, mycotoxins “are quite harmful, they are not something that the average citizen should be worrying about on a regular basis.”

However, as the climate emergency continues to wreak havoc on temperatures, weather patterns, and agriculture, this may not be the case for long. ​​"Robust" evidence seems to indicate that the climate crisis will "significantly" increase the presence of aflatoxin—the most acutely toxic mycotoxin—in maize in Southern Europe, according to a special report on climate change from the Intergovernmental Panel on Climate Change. Indeed, this mycotoxin, not historically problematic in the Mediterranean basin, has recently contaminated dairy produced in Italy's Po Valley as a direct result of climate change, according to researchers.

"​In general, if the temperature increases in cool or temperate climates, the relevant countries may become more liable to aflatoxins​," reads one 2009 paper on the topic in the journal Elsevier.

But even the experts note this area remains murky at best. "The effect of CC on the occurrence of modified mycotoxins is a neglected area and needs to be evaluated and included in future risk maps on a regional basis," reads one 2020 paper on the topic published in Microorganisms. One group from the Applied Mycology Group at Cranfield University even went so far as to title their 2017 paper on the topic "Climate change, food security and mycotoxins: Do we know enough?"

Moving forward, one thing is for sure: we'll need to be more vigilant about the presence of these fungi in our food than ever before.