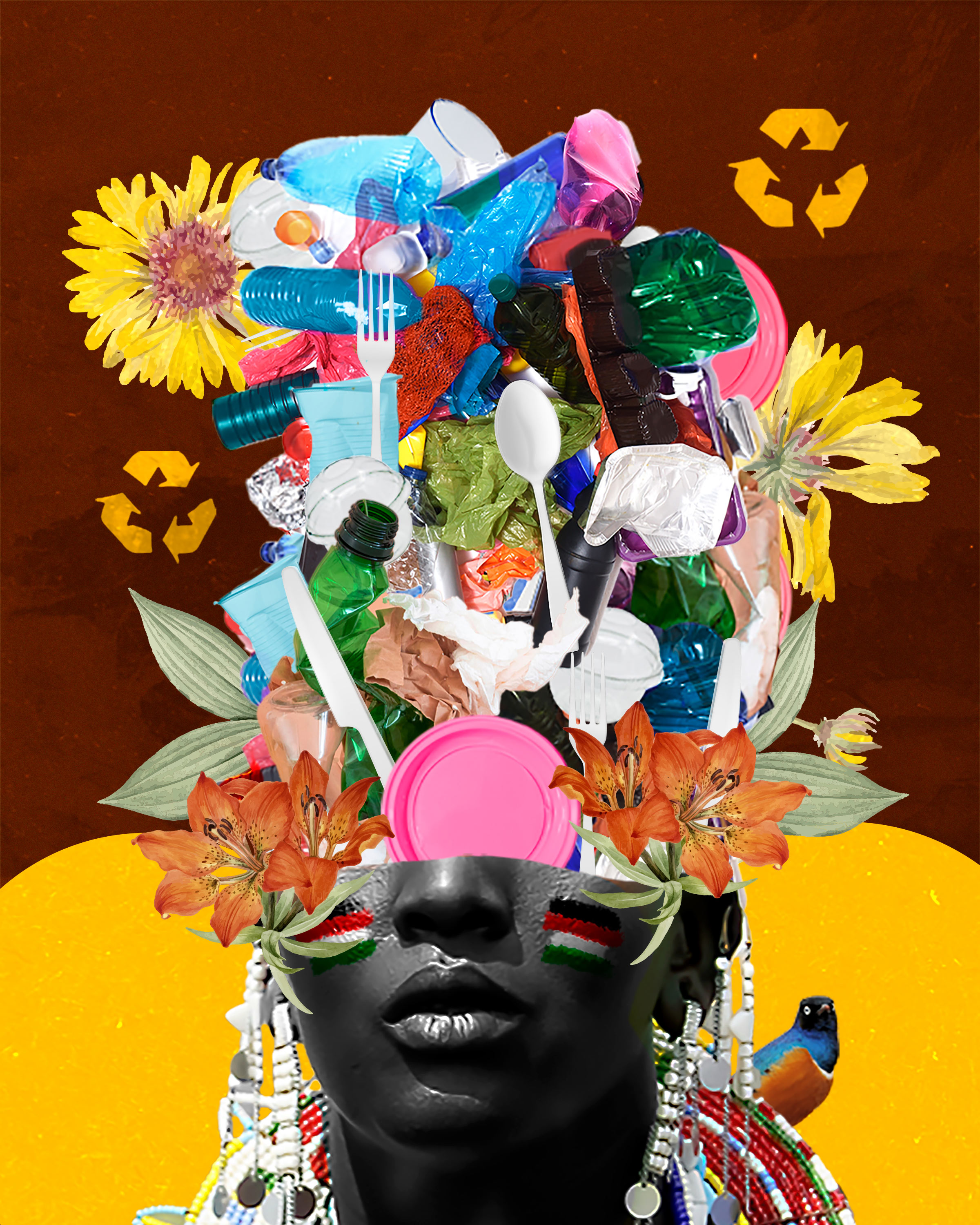 Digital Collage Artist:
Michelle Pessoa
By pursuing a circular economy, the East African state is charting a radical path to address many of the ills of our age
by
Mwende Mutuli Musau
5/19/2022

As the world grapples with the challenge of eliminating single-use plastics, one country is making big strides towards not just eliminating plastics, but food waste, too. That country is Kenya.

Inspired by Wangari Maathai — the first African woman to win a nobel prize, and a world-renowned activist — the east African country is consciously molding itself into a pioneering circular economy. For countries such as Kenya — which has struggled with plastic pollution, food spoilage, food insecurity and malnourishment — the circular economy model is attractive. It doesn’t just target issues individually, but it creates a system in which resource inputs and waste are minimized.

The World Economic Forum defines a circular economy as, “an industrial system that is restorative or regenerative by intention and design”. The Ellen MacArthur Foundation lays out three key pillars of a circular economy: the elimination of waste and pollution; the circulation of materials and products at their optimum level; and natural regeneration. A circular economy should be a closed-loop system, by minimizing what goes into the system and the waste it emits, and by keeping materials and products in good use for as long as possible.

For those who are passionate about eliminating single-use plastics and food waste, it is clear why the circular economy is appealing.

Kenya made its first steps towards eliminating plastic in 2017, when it banned single-use plastic bags in the country, at a time when 100 million plastic bags were distributed per month. The legislation that was passed outlawed the usage, manufacture and importation of plastic bags in the country. In 2020, further legislation outlawed the usage of single-use plastics in protected areas, including national parks, beaches, forests, and conservation areas. Water bottles, disposable cups, plates, cutlery, and straws for food and beverage consumption are all examples of single-use plastics, which often make up much of plastic pollution. And in 2021, the country introduced its circular economy initiative to clean up waste and pollution in Nairobi.

Kenya is yet to root out single-use plastics in the food industry; bread manufacturers, for instance, still rely on them. But the 2020 ban is steadily seeing effects in a number of businesses, where increasing tariffs on plastics and high shipping costs are raising the cost of production for firms. This is forcing businesses to pursue alternative renewable materials to cut down their costs, eliminating plastic use in the process.

In the food industry, stainless steel is increasingly replacing plastics in everything from kitchen storage to cutlery, and glass, too, is being used more. That these materials are replacing plastic already shows the circular economy in action, as single-use materials are replaced by the reusable and the recyclable. Companies are catching on, too. Kitengela Glass, for instance, recycles and transforms scrap metal into glass products that can be used for food and beverages, like jars and the packaging of food items.

The public and private sector both play a role in realizing a circular economy, by pursuing their own initiatives for eliminating plastics and food waste. The government, businesses and social enterprises play a crucial role in transforming Kenya into a circular society, and it is clear that this task is urgent.

Millions of Kenyans suffer daily from malnourishment and food insecurity. According to the United States Agency for International Development (USAID), an estimated 1.3 million people in Kenya are food poor and face malnourishment every day. At the same time, wasteful consumption in Kenya causes food loss and food waste worth $480m every year. UNEP’s Food Waste Index Report 2021 states that the average Kenyan throws away 99kg of food per year, and the country wastes a total of 5.2 tonnes of food annually.

Recognizing this, the Kenyan government rolled out the Warehouse Receipt System in 2019 in the cereals sector. Prior to its rollout, post-harvest losses for farmers were between 30% and 40%. The system sees small-scale farmers deposit their maize in government-owned warehouses, where maize is stored in raffia bags called gunias. Raffia is affordable and widely used in Kenya, and it is biodegradable. Gunias replace the plastic containers that were once used to store harvested crops, a switch which has cut down purchase costs for farmers and taken plastic out of use.

The government sells maize on the farmer's behalf and pays them. This program covers five National Cereal Produce Board (NCPB) certified warehouses in different parts of the country including Nairobi, Meru, Kitale, Eldoret, and Nakuru. The system has been successful, so far reducing post-harvest losses from 40% to 10%, and showing in the process how the circular economy model can simultaneously address different goals: reducing plastic use, and reducing food waste. The private sector is taking note.

SokoFresh, for instance, provides small-scale farmers with affordable farm-level cold storage units, further reducing the use of plastic containers in agriculture. The storage units keep farm produce cool, reducing spoilage, and run on solar power. According to Soko Fresh, “50% of Kenya’s horticulture produce fails to reach the market due to an unreliable and informal supply chain.” Across Kenya, many farmers are unable to store their crops for more than one day, which sees them lose potentially valuable produce. Farmers in Kenya earn poorly while large quantities of food are wasted in the process.

The social enterprise EcoPost is working to reduce plastic pollution, in line with circular economy principles. It creates environmentally friendly plastic lumber using only recyclable plastics. The enterprise purchases plastic waste and biomass from a wide spectrum of businesses, including companies within the food and beverage industry. Some of their customers include Coca-Cola and London Distillers.

Farm to Fork initiatives, in which farmers sell directly to consumers, are gaining traction with individual farmers, too. The process removes intermediaries who might otherwise undercut agricultural producers and it reduces the chance of spoilage, too. Food is not left in inventory without adequate means to store it, and spends less time in transit, with middlemen removed.

Kenya’s move towards a circular economy so far shows us how the model works at removing pollution and waste; not by targeting sectors specifically, but by cutting across industries and designing plastic, pollution and waste out of the system. The Kenyan example should offer encouragement to others that are looking to reduce food waste and plastic pollution. As the Kenyan organization Sustainable Inclusive Business suggests in its report, Kenya is in Transition to a Circular Economy, cultivating good circular economy policies brings more attention to circularity. And more attention to the circular economy will create a better environment for fostering such change.

Kenya is at the start of its journey towards a circular economy, but nevertheless, for a developing African country, it is making big strides towards achieving its lofty and necessary goal: to eliminate food waste, plastics and plastic pollution. It will take the continued combined effort of governing bodies, businesses, social enterprises, and individuals to create a plastic-free circular society that is free of food waste.