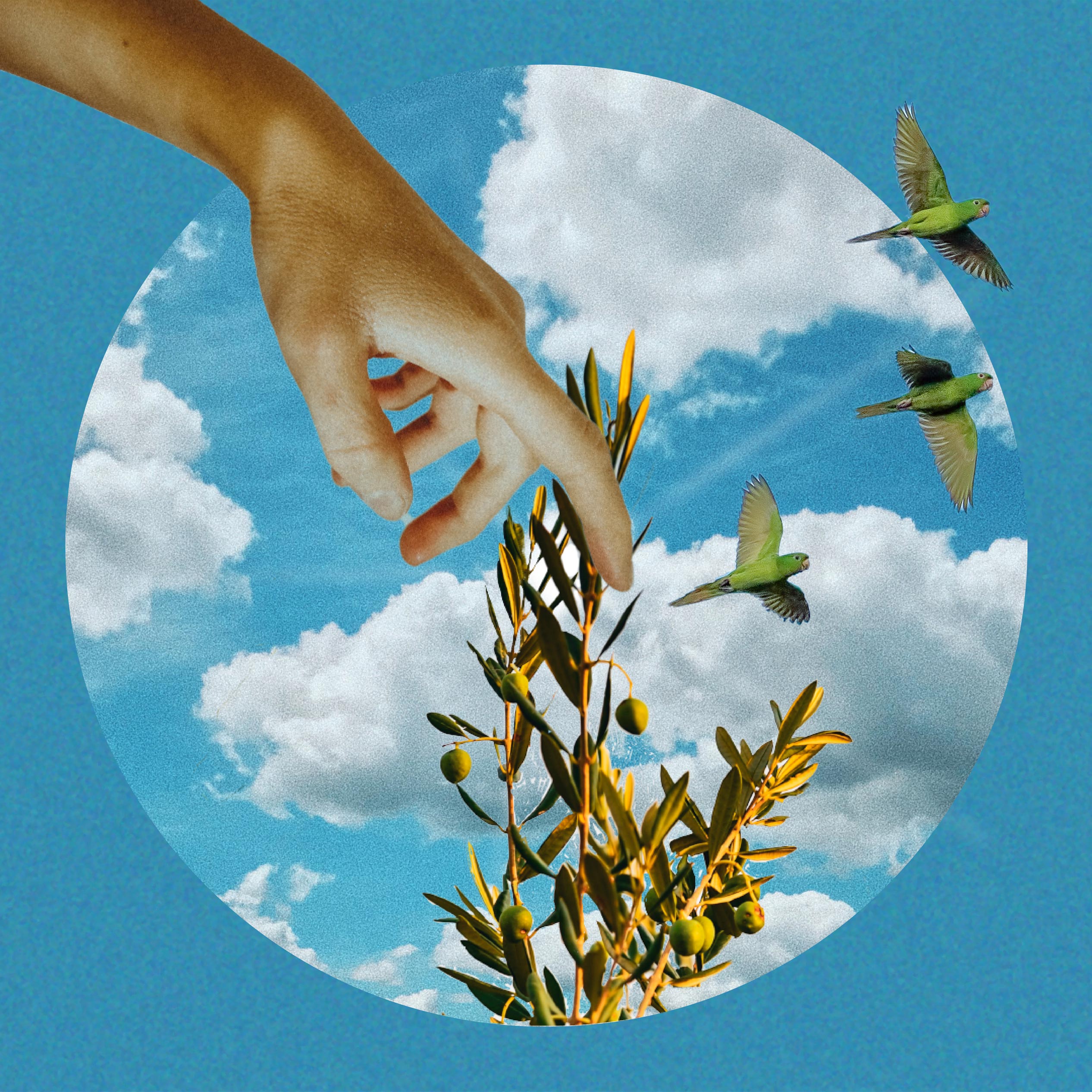 Digital Collage Artist:
Julieta Melho
Traditionally used as a souring agent in home-cooked food, folk medicine and an antidote to evil spirits, the Indian cousin of olives is now finding its way into commercial endeavors.
by
Snigdha Bansal
10/27/2021

“Olive Monday rarely comes in a year. When it does, the young and the old get health and beauty. Pride bows down like a fruit-laden tree, and a silent festival takes place in the hearts of brown men,” Bangladeshi poet Habibullah Sirajee writes of a local olive harvest in his poem Jalpai Sombar (Bangla for Olive Monday).

The Indian olive, scientifically known as Elaeocarpus serratus, is cultivated widely around Southeast Asia, Indo-China, and the Indian subcontinent. It takes on as many different local names as it has potential uses: It’s called jalpai or jolpai in Bangla, jolphai in Assamese, veralu in Sinhala, veralikkai in Tamil, kaarakka or kaara in Malayalam, chorophon in Manipuri, and Ceylon olive or Indian olive in English.

While botanically different from its European cousin Olea Europaea, it gets its name from the similarity in the appearance of the two fruits. In India, jalpai trees grow mainly in the ‘terai’ region of West Bengal, specifically in the district of Jalpaiguri. It is believed that Jalpaiguri even derives its name from the fruit—the suffix ‘guri’ means ‘a place’.

Despite its popularity, the jalpai olive remains one of the most underused fruit crops in the region. Not much is known about its origin or distribution, although it is believed to have flourished in the town of Jalpaiguri and adjacent regions in 1869, which is when the district was established.

Unlike European and Mediterranean olives, jalpai olives are devoid of oil and are consumed instead for their flesh, which lends a distinctive sweet and sour taste to local fare. There are a few common gastronomic uses of the jalpai as a souring agent, and until recently, not many dared to experiment beyond them.

“Jolphai is extensively used as a chutney, roughly ground with salt, chillies, and a dash of mustard oil. Another popular way of preserving our favourite fruit is making pickles to be relished during the summer months,” says Kashmiri Barkakati Nath, a chef, food consultant, and columnist based in Guwahati, Assam.

Because of its tangy taste, children and adults alike enjoy this fleshy fruit. Twitter user @chekla, who goes by the name Northeast_wali, recalls fond memories of Usop, grand feasts organized on religious occasions and festivities in Manipur. During the harvest season, olives are boiled with sugar and salt, occasionally tempered with black cumin seeds to make a sweet and sour relish which is served at the end of the meal and acts as a digestive.

“As children, we would try to outpace each other in drinking our water so we could ask the servers to serve us chorophon thongba (olive relish) in the tall glasses and wolf down large quantities. I associate this relish with the end of the meal, when everybody would be satiated and it would start being a happy, noisy affair,” she says.

As well as aiding digestion, this fruit boasts many other medicinal properties. Research has shown that the plant is anti-inflammatory, antibiotic, analgesic, and antihypertensive in nature. “Jolphai olives are rich in Vitamin C and are often used to treat ailments like diarrhoea and dysentery,” adds Barkakati Nath.

In ancient sciences, the plant was used as an ingredient in ayurvedic medicine, an alternative healing system known to have originated in India over 5,000 years ago. It was also regarded with awe by practitioners of unani medicine, a system of alternative medicine that originated in ancient Greece but is now practised mainly in India.

Today, various parts of this plant are extensively used in folk medicine for the treatment of stress, migraines, and asthma, among other ailments, according to a 2018 study published in international journal Acta Ecologica Sinica. Christophe Wiart—in his book Medicinal Plants of the Asia-Pacific: Drugs for the Future?—explained how an infusion of the bark and leaves is used in Malaysia as a mouthwash to soothe inflamed gums. The bark of the tree is known to be effective against haemorrhages, as well.

The study also alludes to the status of the jalpai olive as a sacred fruit, believed to ward off evil spirits and omens. The authors of the study suspect this to be a form of microbial infection. The fruit further finds use as a remedy for rheumatism, and as an antidote for poison. An ethnobotanical survey conducted among the people of the Mai municipality in the Ilam district of eastern Nepal reveals that they use juice from the bark to treat jaundice, and grind the seeds into a paste as an antidote for pneumonia and ulcers.

In Sri Lanka, the olive is prized in folk beauty treatment. A paste of its leaves is massaged into the scalp before a bath to get rid of dandruff, eliminate lice, and hydrate the roots to make hair smooth and glossy.

The jalpai’s many folk curative properties are now being researched in clinical trials. As consumers around the world tap into their experimental sides and ditch products loaded with chemicals for those made more ethically with natural ingredients, the plant extract is being bottled up by cosmetic companies to supply to both local and international markets. In Sri Lanka, supermarkets sell shampoos and conditioners featuring the plant as a star ingredient. There have also been attempts to produce ointments to soothe skin ailments, and capsules that treat digestive issues using the Indian olive.

In recent years, this folk favourite has also been gaining popularity in commercial kitchens. While bottled jalpai chutneys and pickles are easy to come by in local grocery store aisles, small-scale markets or even online, some companies in the region have ventured beyond the usual and concocted curious delights such as ice creams and teas.

In 2019, Bangladesh brand Savoy Ice Cream launched a jalpai ice cream flavour, which has become an instant bestseller. The jalpai olive makes it citrusy and sweet, with texture comparable to frozen yogurt. Manipuri tea brand Dweller Teas capitalizes on the medicinal uses of indigenous plants in their blends and has combined Manipuri chorophon with roselle to make a fruity roselle olive tea, which is citrusy, refreshing, and digestive, all at once.

Chefs and culinary enthusiasts have been discovering this underrated ingredient and using it to promote not just regional food, but also their own iterations of it. Barkakati Nath organizes Assamese food festivals and visits luxury hotels across India as a guest chef, and often tries to use the olive in her curated meals.

Chef Prateek Sadhu, who runs Mumbai-based Masque, one of Asia’s 50 Best Restaurants, regarded jalpai as a discovery that excites him the most. He recently featured jalpai on their celebrated 10-course tasting menu, in a classic chutney paired with eclectic ingredients like sweet potatoes, black carrots, and mustard.

With such exciting innovations in the works, it seems as though the culinary world is finally waking up to the potential of this sour indigenous fruit, but not without an eye-squinting pucker.