ISSUE
-
Watermelon
Inside the Rind 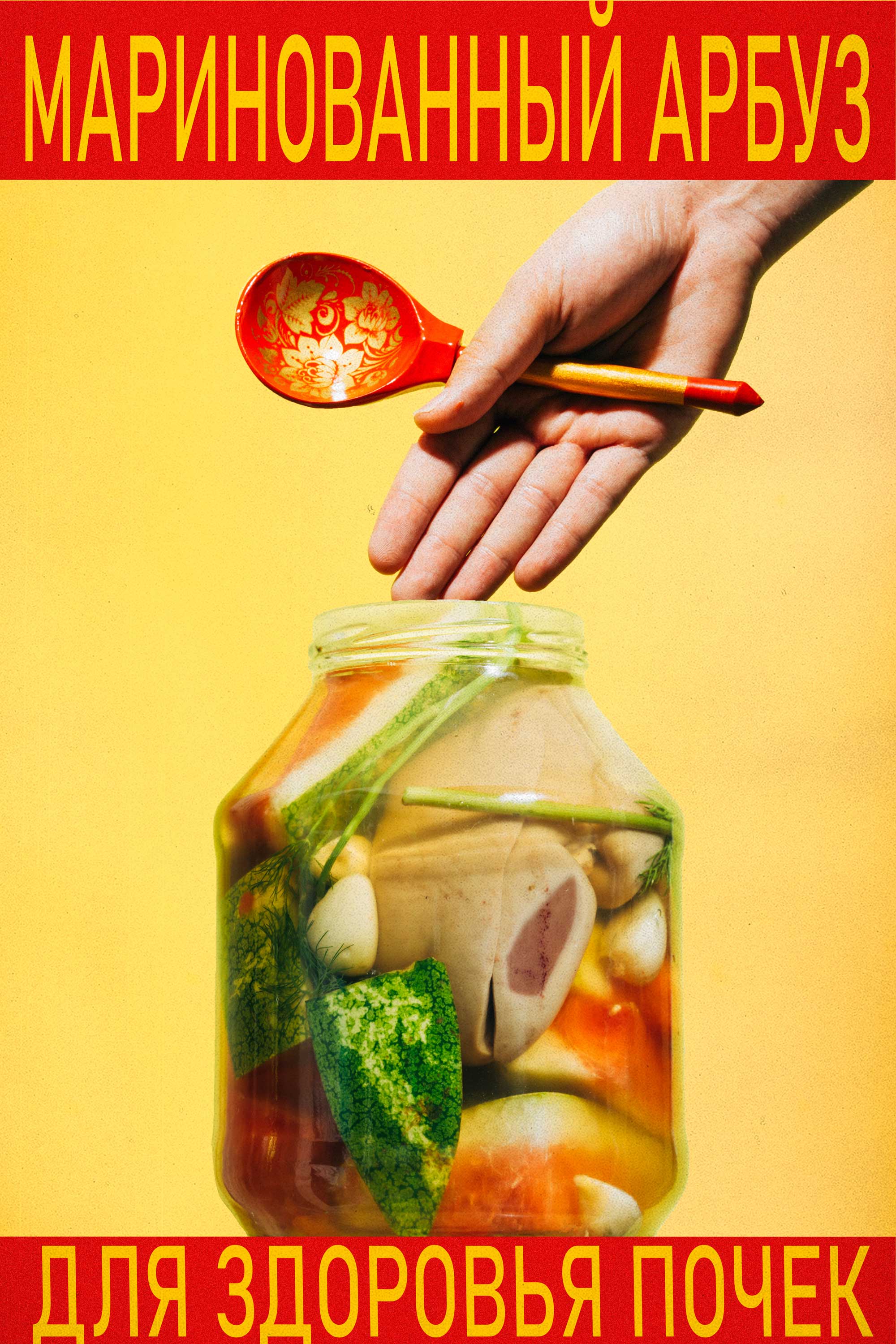 When the Russian summer sun reached a gentle midday heat, my grandparents beckoned me to the table cooled by the branches of the apple orchard. They’d cover the table with fruits from the garden and market; acidic green apples plucked from the tree limbs overhead, strawberries and raspberries from a patch in the corner, and a long, oblong watermelon hauled from the market.

The languorous days of my early childhood at the country house were split into meals and snacks, and the afternoon fruit session was my favourite. I’d chow down on one juicy watermelon wedge after another, each slice oversized to my 6-year-old grin. My grandparents encouraged me to eat more, to rehydrate, the juice running down my arms and sprinkling sugary water into my lap.

‍
“It fully cleans you. It runs through your whole body like a river of watermelon. It’s good for your kidneys,” my grandmother would say, remedial in her attention and care. Soon, I’d reach my capacity and sprint away into the bushes, completing the cycle of the hydrous fruit.

Watermelon’s history follows that of humanity’s; all the way back to the arid expanses of Africa. The earliest evidence of watermelons dates back 5000 years. This simple food has absorbed a multitude of beliefs during that time—an abundance of superstitions that has little, if any, nutritional justification.

In Ancient Greece, the physician Dioscorides believed that watermelons were diuretic, and that placing the rind on a child’s forehead would relieve them of heatstroke. In China, the fruit, which is known as xia gua, is often used in herbal medicine. The flesh is used to reduce irritability, inflammation, and improve heart health, while the seeds are brewed into a tea to reduce blood pressure. Across cultures far and wide—from ancient Uzbekistan to viral clickbait culture today—the watermelon is believed to act as an aphrodisiac, too, working like a natural viagra.

So, what is it about the fruit, with its thirst-quenching summer associations, that makes it so prone to cultural superstition?

Humans first took interest in the watermelon for the reason it gained its name; as a source of hydration. It is more than 90% water after all, a fact that is often used to dismiss the watermelon.

A 4000-year-old depiction of a watermelon suggests humans began farming it soon after discovery. Humans started to breed this fruit to enlarge its water content but soon found they could also improve their flavour. For Ancient Egyptians, the fruit was so bounteous it became a staple in all tombs, including King Tut’s. A journey for the afterlife must involve a source of hydration, and watermelon proved a rare lifeline amongst inhospitable surroundings.

Today, there’s relatively little research into the watermelon’s nutritional qualities, and what research there is suggests the watermelon isn’t actually that nutritious—whatever our forebears might have believed.

Watermelons carry a small assortment of useful vitamins such as vitamin A and vitamin C, although not as much as vitamin-rich foods like carrots or citrus fruits. The watermelon’s few compelling benefits are produced by amino acids and antioxidants.

First, there is citrulline, an amino acid that owes its name to the Latin word for watermelon. Research demonstrates watermelon’s one definite nutritious advantage: it is an excellent post-workout snack. By metabolizing into arginine, citrulline relieves muscle soreness, calms heart rate, and improves blood flow. In fact, an Italian study recently became an online sensation for appearing to endorse watermelon’s viagra-like qualities. The research found a correlation between arginine and a very mild improvement in erectile dysfunction. But while watermelons aid circulation, a lack of scientific backing suggests a ‘watermelon aphrodisiac’ is implausible. You need to eat a lot of the fruit to get the required amount of arginine.

Lycopene is another key component in the watermelon’s nutritional arsenal. This antioxidant gives the watermelon its iconic bright red pigmentation (tomatoes and peppers also derive their colour from lycopene). Along with guava and an intensely flame-coloured Southeast Asian melon known as gac, watermelon is the most lycopene-heavy raw fruit in the human diet. Lycopene has not been exhaustively studied, but preliminary research indicates it functions as an antioxidant, meaning it aids heart health and helps to reduce the risk of cancer.

There’s little reason to believe lycopene can explain the full scope of watermelon’s healing properties, but plenty of reason to think it’s the basis for some archaic suppositions. Just like Dioscorides’s assumptions in Ancient Greece, lycopene has demonstrated usefulness against sun protection and has proved mildly effective for erectile dysfunction, which it relieved in diabetic rats.

Over the past several thousand years, humans have selectively bred watermelon for their delectable bright red aesthetic, in turn making the fruit progressively more lycopene-rich. Although breeding has certainly not created the sun-blocking, aphrodisiac answer to all our ills, the intertwined relationship between melon and humans could explain the pervasiveness of its medicinal myths.

Although watermelons never symbolized more than a summer treat in Western Europe and North America, they engrained a deeper cultural symbolism in other civilizations both modern and old, including the culture of my childhood.

After my first encounter with the large fruit at the country house, I recall the watermelon sprouting amidst many of my summer memories. Throughout all of Russia, July and August mean watermelon season. Sales spring up at every conceivable venue—supermarkets, convenience stores, roadside vendors, and even elderly farmers at subway stations. The mania takes hold as convoys of trucks bring the very long, oblong-shaped melons from the south, littering behind a trail of tiny black seeds. What the Apple is to America, the арбуз is to Russia—the pictorial representation for the letter A, the first learned word, and, for me included, the first fruit that children sample.

Unlike Johnny Appleseed’s regional celebrations, the Russian watermelon craze represents more than a cultural quirk; it is a tangible economic migration. Copious truck-loads of the fruit arrive from the Astrakhan region, an atypically hot and arid region bordered by the Caspian Sea. Nearly 1,000 miles from Moscow, migrant labour fuels the exchange, working the route annually to satisfy succulent cravings.

This melon passage dates back centuries; the Kamyshin Watermelon Festival was first held in 1722, after Peter the Great sampled a particularly tasty watermelon in the region. Leading into the 20th century, the fruit became a symbol of fertile abundance. In the often famine-stricken Soviet Union, watermelon on the table represented bounty; a sweet, succulent everyman’s food. The Soviet government propagated ideals of agricultural unity and surplus through the pleasures of this fruit, such as this poster which states “This watermelon looks good, tastes good, and can sustain the whole union.”  Abundance and economic activity seemed to translate into nutrition, and ideas about each reinforced the other. The health of the nation and society, therefore, was also the health of the body. During the mid-20th century, watermelons were plentiful and affordable. Even today, street watermelons can sell for as little as 40 cents a kilo, granting all social classes access to sweetness.

Russians are credulous to homeopathic medicine, so as the watermelon became abundant, its physiological effects were easily inflated. Russian babushkas touted its cleansing properties, seeing the late summer as an opportunity to purge accumulated toxins. Watermelon sanitariums opened, a gateway for city-dwellers to escape to the countryside and ‘reset their systems’.

Alongside imports from Astrakhan, the more greatly prized Uzbek watermelon appeared for sale, affixed with deep-rooted cultural meaning that added to the fruit’s mystical properties. In the Central Asia nation, watermelons have a feminine aura originating from perceptions about the form of the watermelon itself. Such Freudian fruit associations are yet another example of the prevalent belief that the watermelon ‘boosts manliness’.

The influx of Uzbek immigrants to Russia carried these notions into the Soviet mainstream. As cheerful Russians and Uzbeks chowed down on juicy watermelon, the sweet juice running down their arms, they delighted in how the fruit made them feel. Enjoying the visceral pleasure, but projecting more—prosperity, fertility, and purity. Whether their beliefs had a nutritional basis did not matter—the joys of eating a watermelon felt like alleviation to their woes.

In the deserts of Eurasia and Africa alike, a watermelon is a rare form of lusciousness. It satiates deep human cravings and needs. Nutritionally, the watermelon is predominantly a vehicle for hydration, with scarce research to prove any excelled medicinal properties. Yet presented with such a gift of abundance, it’s no surprise people ascribe their medical exigencies to the fruit.

Whether hiding from the hot sun, cleansing the body of grit, or hopeful for rich fertility, the joys of consuming a watermelon provide a respite from surrounding troubles. Cutting the core, spilling the succulent flesh, and sharing—always with enough to go around—is truly a gift.
‍

‍
The process is so satisfying, it has inflated the medicinal power of the watermelon everywhere. Dampening distress and inspiring hope in the toughest of surroundings, it’s logical so many overstated beliefs arose and followed the fruit along. What was good for the soul was good for the body. The journey the watermelon took to our tables beautifully showcases how humans took the little they found and turned it into so much more. A fruit of size apt for the human spirit.