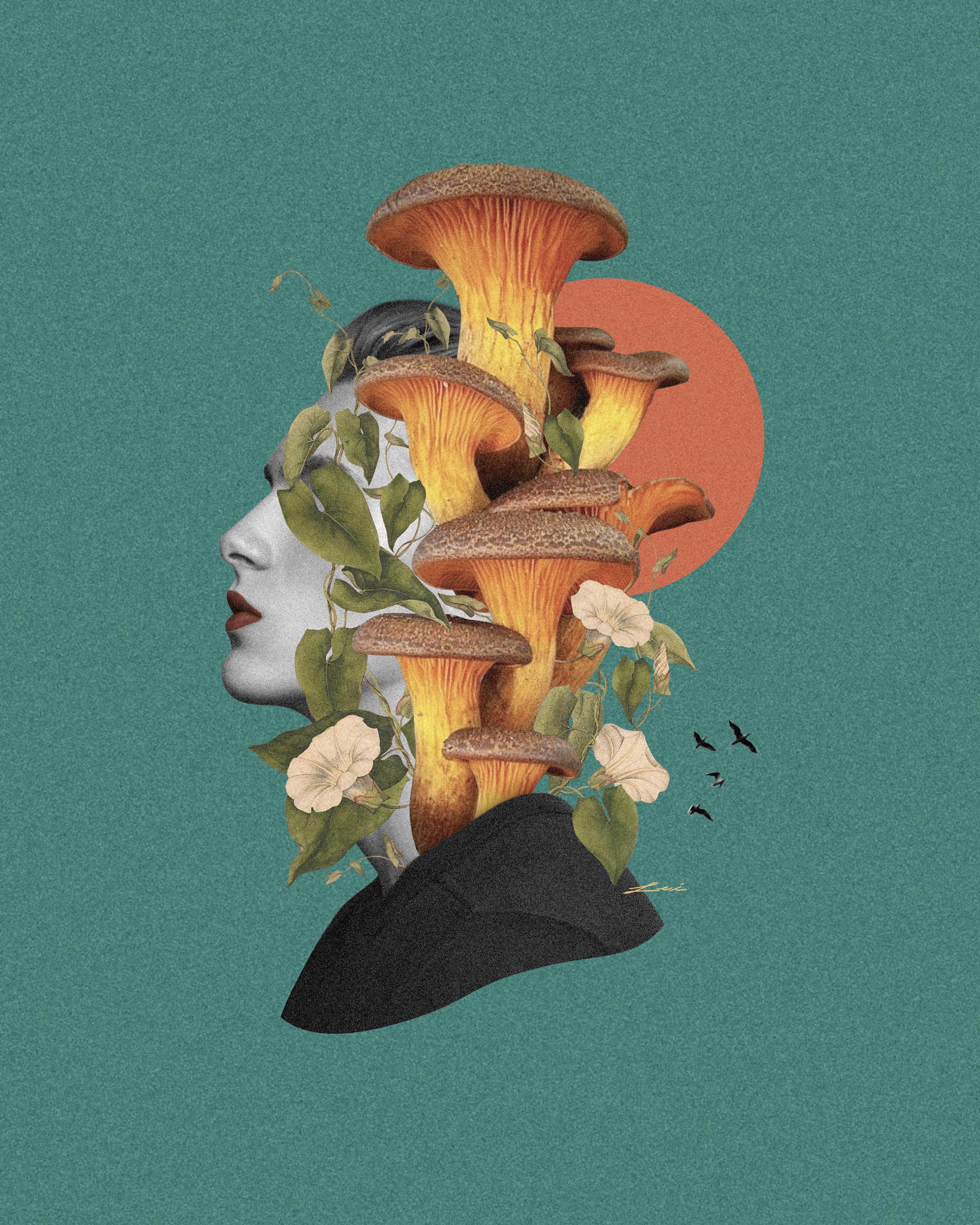 Digital Collage Artist:
Lei Reburiano
India is home to amazing fungal diversity, but, despite the best efforts of their indigenous gatekeepers, the climate crisis and overharvesting threaten the country’s mushrooms
by
Sohel Sarkar
1/27/2022

Scientists believe life on this planet may not exist without fungi, yet we are doing precious little to keep them alive. India is home to a third of the world’s fungal diversity, so it is a good place to start, then, in telling the story of the world’s vanishing fungi.

The wealth of the country’s fungal diversity is evident in the forests, deserts, and meadows; on decaying wood, rotting plants, and termite hills. Their custodians are India’s indigenous communities, who consume nearly 283 of the 2,000 species of wild edible mushrooms recorded the world over.

Finding wild mushrooms is a tricky affair in which timing, skill, and luck must coincide. In India, most of them only fruit between July and October, although some sprout as early as March. They are specific to certain habitats and seasons, and occur in diverse shapes, sizes, and textures. Some only survive a few days.

Indigenous communities, however, can draw on generations of knowledge. They know exactly how to find edible fungi, based on their appearance, smell, shape, and location. Each community has a specific name for each of these fungi, which often indicates where the mushroom originates.

In the state of Karnataka, mushrooms growing on dead logs of mango trees are called mange mara kum (Mangifera indica). In the neighbouring Kerala, the vernacular name for mushrooms that grow after bamboo woods are destroyed is mulankunoo, and koovakoon sprouts when a patch of trees are cleared in a forest area. Other varieties are identified based on texture and shape. A mushroom that grows in the hilly regions of Maharashtra is known as telia sattar because of its oily slippery head.

High levels of rainfall and humidity make the mushroom-loving northeastern regions of India ideal habitats for wild fungi. Forest mushrooms are vital parts in the diet of indigenous communities, who have developed unique techniques to cook and preserve them. In a traditional technique called narsuh, Khasi communities in Meghalaya place a scalding hot iron rod in the middle of the cooked mushroom to remove harmful toxins.

While many communities can rely on ancestral knowledge to identify mushrooms, it is not uncommon for people to die from mushroom poisoning. Bilinda Kong learned at a young age to identify edible varieties by accompanying elders on mushroom gathering trips in the forests around Jakrem village in West Khasi Hills of Meghalaya. After her husband died, she turned to mushroom foraging to feed her family of five, often trying out unknown varieties of fungi. On one of these excursions, she accidentally picked a toxic mushroom.

“I just wanted to test because I liked the look of it,” the 70-year-old says in Stephen Axford and Catherine Marciniak's documentary Planet Fungi: North East India. It left her “sweating all over and my clothes were soaked.” On other occasions, the trial-and-error method produced some delicious meals, she reveals.

While most wild mushrooms are eaten fresh during the monsoons, a few are dried and preserved to be consumed through the rest of the year. This practice is particularly prevalent in Jammu and Kashmir, where fresh vegetables are scarce during the long and harsh winter. Some of the region’s 41 types of mushrooms are sun-dried, smoke-dried, and salted or mixed with turmeric to enhance their shelf-life. Kashmir is also home to one of the most expensive wild edible mushrooms in India. The morel mushrooms that grow in the region have a “spongy, honeycomb texture and a unique flavour” and are known locally, and quite appropriately, as gucchi.

Scouring for them is a laborious task. Locals dig through thick layers of snow to find these hidden delicacies.

Typically, women and children from the region’s Gaddi and Shippi communities are far more involved in mushroom foraging than men. Children are particularly good at locating mushrooms because of their keen eyesight and proximity to the ground, explains Yash Pal Sharma, professor at the botany department in Jammu University.

A day’s search may yield only a few grams, and the entire haul is sold in local markets where they fetch anything between Rs 20,000-40,000 (USD$270-540) for a kilogram. This is not an insignificant amount of money for historically resource-deprived communities in the region, which have few other sources of livelihood.

During months when Hindu rituals forbid consuming meat, mushrooms are in high demand. In Jharkhand, women from the Santhal and Oraon communities gather in local markets between July and August to sell the rare rugra or putu mushrooms, often called ‘vegetarian mutton’. The fleshy olmi or alami mushrooms that grow on termite mounds are extremely popular in Goa; Goan homes consider the monsoon incomplete without at least one meal of olmi mushrooms, and are willing to fork out exorbitant rates for these delicacies.

This popularity is a cause for concern. High prices have led to increasingly unchecked harvesting, and many wild edible mushrooms are slowly vanishing. Of the 15 varieties spotted in Goa in 1986, only five now survive.

“Overharvesting is also becoming a problem because in-situ [or on-site] conservation is not happening. People who are collecting these mushrooms have no knowledge of conservation at all,” says Meera Pandey, principal scientist at the Mushroom Research Lab at Indian Institute of Horticultural Research, a subsidiary of Indian Council of Agricultural Research (ICAR-IIHR).

The problem of overharvesting is compounded by rapid deforestation, wiping out habitat-specific mushrooms for which there are currently no conservation techniques. The depletion of conifer forests in Kashmir, where morel mushrooms grow, makes them harder to find. The destruction of forests due to mining and construction activities threatens the rugra in Jharkhand and a similar boda variety in the neighbouring Chhattisgarh.

The climate crisis is taking its toll on mushrooms, too. The amba chhatu and bali chhatu in Odisha and the tit khyndong hati are vanishing as changing temperatures and humidity levels disrupt the time when a fruiting body pops out of the ground. Currently, about 450 species of fungi are included on the International Union for Conservation of Nature’s Red List of Threatened Species. Work on developing a red list of India’s fungi is currently underway.

Some conservationists have called for “a total irreversible ban on collection and consumption” of wild edible mushrooms. But a blanket ban cannot account for the effects of the climate emergency or the livelihoods of communities who depend on the sale of rare mushrooms. A more sustainable solution, according to Pandey, is to domesticate the varieties that indigenous communities consume and sell, rather than collecting them from the forest, which can result in overharvesting.

The milky mushroom (Calocybe indica) was the first wild edible fungi to be domesticated and commercially cultivated by Pandey and her team in 1993. Since then, the IIHR has commercialized a pink oyster mushroom originally found in the Shivamogga forests of Karnataka and the Volvariella volvacea that grows on paddy straw. This year, the lab has released production technologies for the Macrocybe gigantea, indigenous to West Bengal and the Pleurotus tuber-regium, a wild species found in the northeastern state of Tripura, Pandey says. Most of these are tropical species that can grow at a temperature of 30-40 ℃, and could be cultivated in other parts of India with similar weather patterns.

However, such conservation techniques have no success with mycorrhizal fungi, which form symbiotic relationships with particular plants and depend on their root systems to grow. Termitomyces mushrooms like olmi grow on termite hills and exist as symbiotic partners with plants, helping them extract minerals and water from the soil, and in return, getting sugar compounds from the tree. They also provide food for the termites and aid decomposition. It is this delicate ecological balance that is disrupted when such fungal species disappear, explains ecologist Jui Pethe. Species-specific lab conservation cannot not take these dependencies into account or protect the broader habitats in which these species grow.

The conservation of such species requires a bottom-up approach that engages indigenous communities themselves. For most communities, wild edible fungi are not only a source of livelihood but also essential micronutrients. Wild mushrooms have antioxidant, antimicrobial, anticarcinogenic, cholesterol-lowering, and immunostimulatory effects, and they are also rich in carbohydrates, proteins, vitamins, minerals, fibre, and various amino acids and have low fat and oil content. As such, they have medicinal value and form an integral part of the diet of indigenous people. Communities must be made aware of the loss of nutritional security and the ecological impact of overharvesting, so that they can make an informed choice, Pethe says.

A sustainable conservation plan must also lay down “some ground rules on how much should be harvested, when they should be harvested. Indigenous communities have been doing this for centuries,” she points out. In the Nandurbar district of Maharashtra, for instance, people enter the forest to harvest wild species of plants and fungi only after a ritual offering is made to the local deity at a certain time of the year, thus limiting the period during which foraging takes place. Current conservation efforts perhaps need to recollect and reinvent these time-honoured rules.

A critical tool in this regard is available in India’s Forest Rights Act, which allows a community to get its traditionally held forest land legally recognized as a community forest resource. The provision gives local governance bodies the “right to protect, regenerate or conserve or manage any community forest resource which they have been traditionally protecting and conserving for sustainable use.” Acquiring the right to forest land is a fraught exercise, but once granted, communities get a stake in developing a sustainable plan to manage forest resources and ensure their preservation for generations to come.

If that happens, at the very least, India’s wild mushrooms can be restored to their original custodians.