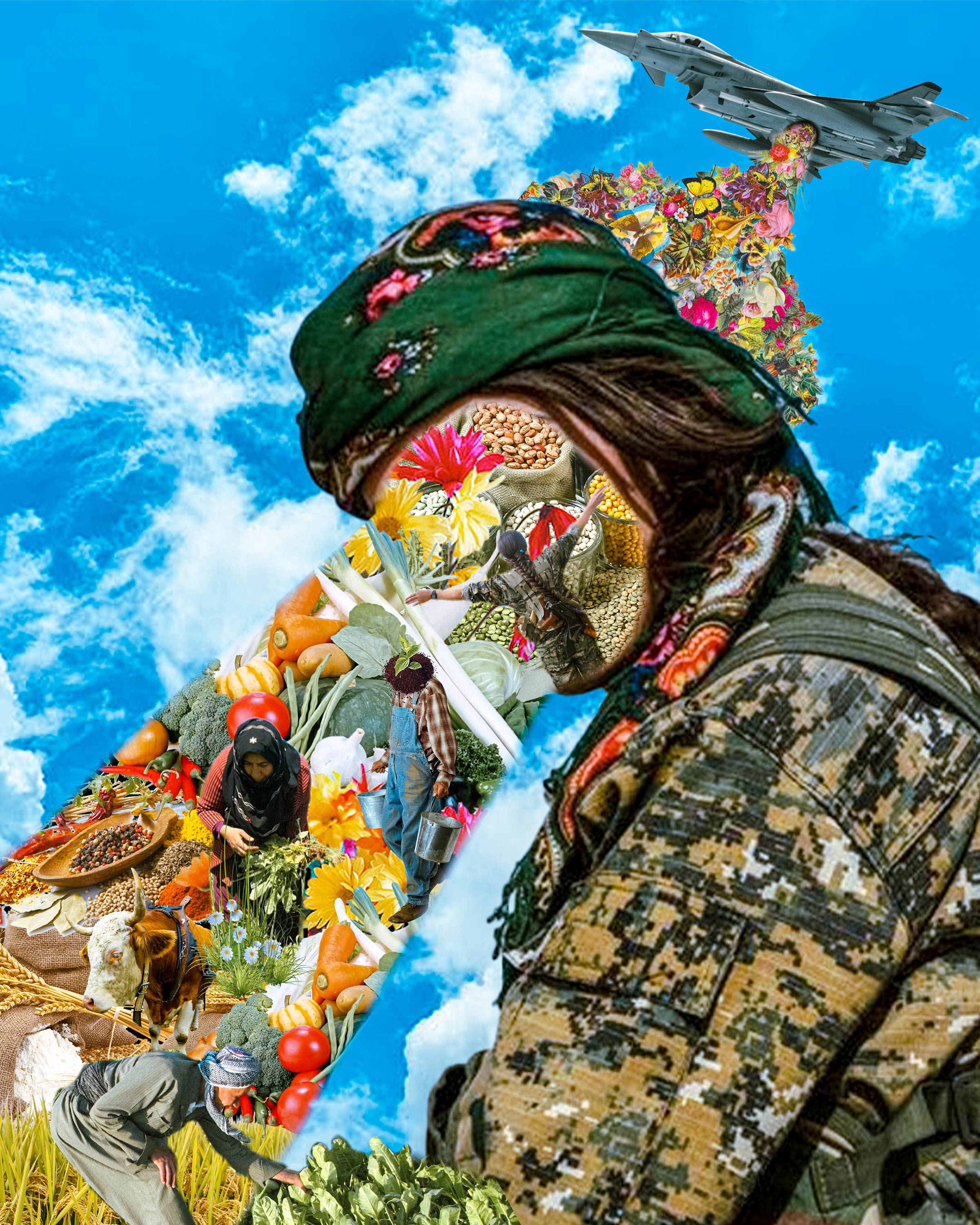 Digital Collage Artist:
Salma Sherni
After liberating land from the regime, they’ve ripped up the state’s disastrous monoculture policy, and put agricultural practice and decision-making in the hands of the people
by
Likam Kyanzaire
4/21/2022

In 2011, the Arab Spring uprisings against Syria’s brutal government ignited the Syrian revolution. The revolution has since morphed into a civil war, a proxy battle between foreign states and all-out suppression by Bashar al-Assad’s government — with lots of Russian involvement, too. Amid it all, Syria’s Kurdish rebels in the north of the country managed to carve out their own autonomous area, where they’ve pursued a socio-ecological revolution on the lands they have liberated.

The Autonomous Administration of North and East Syria (AANES), also known as Rojava, sits beside Turkey's southern border, as well as Iraq's northern border. These areas roughly correspond to a region defined as Kurdistan, and the Kurdish people are the largest ethnic group on earth without a state of their own. Kurdish identity naturally sits at the heart of this revolution. Liberating land from the Assad government gave them the perfect opportunity to put their long-held principles into practice.

Syrian Kurdish forces are known as the YPG. The YPG’s sister organization, the PKK, is labelled a terrorist organization in Turkey. And so their leader, Abdullah Ocalan, has been imprisoned on Imrali island in the sea of Marmara since 1999. For much of that time, he has been the only prisoner on the island. Ocalan dropped out of school as a teenager and became an activist, developing his revolutionary philosophy of ‘democratic confederalism’, which would become the blueprint for Rojava’s economic and political systems.

Ocalan’s vision was motivated by the very serious ecological and physical threats facing Kurdish peoples in Turkey and Syria. Starting in the 1980s, Ocalan led ecological struggles against the building of dams in Turkey. Projects like the Ilisu Dam displaced millions of Kurdish people and destroyed more than 4000 villages. Into the 1990s, the displacement of rural farmers all over Kurdistan further radicalized populations, increasing support for Ocalan's revolutionary ideas.

Throughout the 20th century, both Syria and Turkey prioritized growing cash crops, employing the practice of monoculture — the large-scale planting of one crop. In places like Rojava, this marked a huge departure from a history of subsistence farming, in which a huge diversity of crops of fruit and vegetables were replaced with cash crops like wheat and barley.

The government enabled monoculture by subsidizing water use and inputs like fertilizers for wheat farming. The engineering of ecology to irrigate these resource-intensive crops had disastrous effects for water and soil health in northern Syria, leading to droughts, falling yields and fatal health outcomes for people in the region. From 1990 through to the beginning of the revolution, Syria’s agricultural growth per capita declined in real terms. According to the UN, between 2008 and 2009, 800,000 people lost their livelihoods due to droughts, brought on by the depletion of water in regions that now make up Rojava.

As a result, farmers and agricultural workers alike began migrating to urban centres, joining the bands of other disenfranchised workers.

So by the time Kurdish groups came to control vast swathes of land in the country’s north, there was both the opportunity and need to implement Ocalan’s transformative ideas.

Ocalan was heavily inspired by the American anarchist and communalist thinker Murray Bookchin. He advocated for a vision of social ecology in which society’s desire to dominate nature and use the environment for its own ends is replaced by ethics and systems that enable nature to thrive on its own terms. He argued that if humans are to live with the natural world, they need to allow the highest level of spontaneity from nature.

For Ocalan, applying Bookchin’s ideas to the Kurdish context was logical. Bookchin recognized agriculture is complex, arguing that complexity brings stability and the integrity of an ecological system (and any system for that matter) depends on its diversity. Seeing the ecological devastation caused by monoculture, Ocalan saw in Bookchin’s writings a viable blueprint.

Ocalan took this a step further, too, developing a system of thought called democratic confederalism, which can be described in two parts.

For democracy anarchists like Bookchin and Ocalan, democracy is about creating a public sphere based on cooperation and community. In this vision, small local democratic organizations, like co-operatives, develop plans and procedures based on popular vote that are then instructed to larger bodies, town councils, even regional bodies. In Rojava, for instance, community councils decide what food to produce for each other, instead of following the regime’s stated monoculture policy. Those decisions are then shared with provincial councils and civil groups like the Mesopotamia Ecology Movement (MEM). These larger groups are tasked with organizing infrastructure and resources necessary to implement the policy decisions of the communal councils.

The second part of this conception is confederalism. The large bodies that implement policies must work with the local organizations that make them. Administrative bodies do not make policy, but see it through. For Ocalan, civil society is a counterweight to the state and the power of corporations. Campaigns like the ‘Make Rojava Great Again’ work with local councils and the larger Democratic Society Congress to develop and enact plans in green energy and reforestation. Major projects involving multiple co-operatives and towns are created to empower farmers, because it is the farming populations writing them.

Often run and occupied by women, these co-operatives have been instrumental in remaking the social fabric of Rojava. One example is Jinwar Village, a co-operative community for women combatants and wives of slain men fighters. Baxçeya Demsal (the season garden) is an agricultural co-operative that employs around 40 women between the ages of 20 and 50, sustainably farming and selling vegetables at local markets at an affordable price.

In 2016, MEM — in collaboration with Slow Food International and Rojava Ministry of Water and Agriculture — helped to build a series of school gardens in the city of Kobane, where children can learn about biodiversity and to grow a wide range of foods. Instead of wheat monocultures, children are learning to grow pomegranates and figs on land once destroyed by Islamic State.

Using a ‘unity in diversity’ approach, the co-operatives plant multiple crops like cotton, olives and dates. Crops are given out to all members of the co-operatives, and some are sold in markets. What Ocalan knew, Bookchin knew (and simple biology tells us, too); rotating multiple crops in this fashion protects each of the crops from pesticides in a way monoculture cannot, saves water, and improves production.

Unmaking decades of fascist politics and ecological mismanagement is hard. And problems with pricing and enough food persist, nine years into the revolution. Yet in Rojava real progress is being made. From a base of zero, more than 7% of the economy in Rojava is now produced by co-operatives. According to a study conducted in 2019, eggs supplied by local co-operatives required less than 2% of the monetary cost of eggs supplied by modern supermarket supply chains. Smaller inputs mean smaller prices in the long run. Reforestation and wildlife reserves are starting to heal the landscape.

The scars left in Rojava, and Kurdistan, are deep and will take decades to heal, but the success of Rojava is strongest in the people, who are connected by land and cause. As this unattributed quote on the site Slow Food says, “The gardens grown in ten schools in villages around Kobane are more than just plots of land: they are also a symbol of freedom and the desire to rebuild what violence and war have swept away for too long.”

The success Rojavan farmers have created for themselves is starting to bear fruit in the gardens of the revolution.