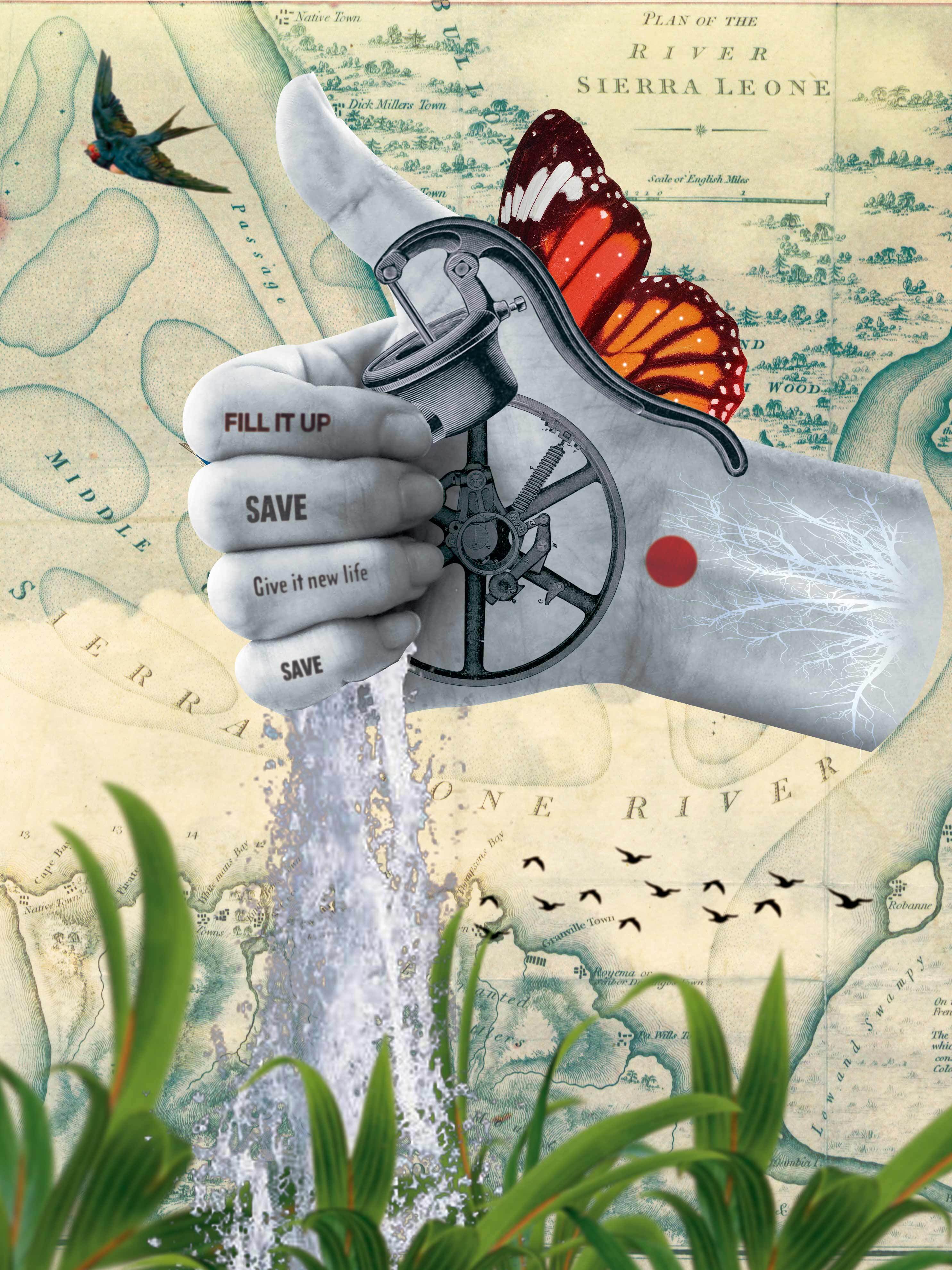 Digital Collage Artist:
After tragedy struck his family, Benson Kandeh used his own savings to create a low-cost water-pump technology. Now, hundreds of communities across the country have safe access to water thanks to his work
by
Devyani Nighoskar
7/21/2022

On a rainy August morning in 2006 in Gofor, a small village in Sierra Leone’s Eastern Province, 12-year-old Benson Kandeh paced restlessly outside his house, waiting for his sister to return. Only 8 years old, Mariama had gone to the nearby Mano River to fetch water for herself and her family — an activity she did twice a day, but usually never alone.

That day, Benson had decided not to accompany her. The 90-minute walk with two canisters of water would have taken its toll on his feverish health, but now he regretted it. Hours had passed, and Mariama hadn't returned. Three days later, her body was found in the river. She had slipped and drowned.

The tragic incident only amplified Kandeh’s motivation to provide easy and safe access to drinking water for rural communities like his. "This is a dream I have had ever since I started being flogged at school for reaching late. We would be walking distances to collect water in the morning," said Kandeh, who is now 27.

Much like Kandeh, many kids across Sierra Leone miss school because of the time it takes to collect water for the family. According to The Water Project, Sierra Leone “draws only one-third the amount of freshwater of similar-sized countries.” Most of it is diverted for agricultural use, while chemicals used in agriculture and industry have also been found to pollute existing water sources.

"Over the years, the problem has become worse with the onset of global warming, rapid deforestation and urbanization," said Kandeh, who examined the issue during his dissertation while completing degrees in Natural Resources Management and Water Sanitation and Hygiene from Njala University, Sierra Leone.

But along with his diploma, he also managed to complete something else — a low-cost water pump technology to make water safer and more accessible to the rural communities of Sierra Leone.

Kandeh’s water pump technology combines two approaches: One proposes communal systems, such as a well, with a durable pump. The other concept, the Sierra Leone Pump (‘SL-Pump’), encourages households to construct their own pumps with support from local technicians.

“The communal system is modelled on the design of a traditional African well. First, a borehole, 100m deep and two inches (5cm) in diameter, is dug. The pump is installed in the village centre so that people don’t have to travel. Then using rocks and rubble, we create a base to fix the pipes and pack them around the rim. Next, we lower two PVC pipes into the well. One is connected to a manual hand pump and an electric pump that can facilitate gravity irrigation and fill up a water tank. Most deprived communities do not have access to electricity. So it was important to create a manual pump as well,” explained Kandeh.

Kandeh used his own savings to build the first prototype in 2012. “I installed it in my village, and everyone was so happy to see the water. First, they couldn’t believe it, then they wanted to know how I did it,” Kandeh said with a smile.

Over the years, Kandeh has developed his technology by understanding local challenges. He has designed new pistons to control the water level, and reduced the labour required by making a more robust machine for drilling wells. Currently, he has installed 424 pumps across 12 districts of Sierra Leone.

In Sierra Leone, water pump technology for one village community of about 150 people costs around $8000. But by using locally available materials like marble, stones, PVC pipes, and used tires, Kandeh was able to build his water pump technology for only $700. But even if that is a big saving, $700 for one well in one of the world’s poorest countries is still challenging. To back his innovations, Kandeh uses social media advocacy and crowdfunding.

“Hi, Hello, Good Morning, Good Afternoon, Good Evening, today is yet another day in the life of ”, is how Kandeh introduces many of his advocacy videos in his Facebook group, which has more than 2000 members, and on Instagram. In his videos, he reports from villages across the country in his brightly coloured clothing, introdudcing local communities while explaining the water issues facing the villages and describing how much funding is required to install one of his pumps.

“Once the funds are raised, I go back to the village, identify some youngsters from within the community and build the pump. With members of the community being involved from stage one, we ensure that they do not just feel the ownership towards the pump, but are also aware of the technology to be able to repair and/or replicate it,” explained Kandeh.

In 2019, Kandeh formalized his work and operations under an NGO called Eco Water Solutions. However, Kandeh hasn’t patented his technology because he wants it to be accessible and adaptable within various contexts.

“Benson has made the water accessible to us,” said Abdul Barie, a village headman from Rogbangba, a village that formerly faced a massive water crisis, which also became a security concern. “Young girls would be harassed and kidnapped or even used for sacrifice when they went to fetch water. By reducing the distance to fetch water, Benson has created a solution,” Barie added.

This sentiment resonated strongly with Mogaba, a woman in her late 30s, who walked a mile every day to fetch from a stream water that wasn’t even fit to consume. She said, “Once my daughter got diarrhea and rashes on her skin because of the uncleaned water she bathed with. Thankfully, Mr Benson reached my community. We no longer walk long distances or encounter water-borne diseases.”

Kandeh's innovations are shaped by a deep understanding of a community’s needs, its psyche, and participation. He explains this with a vivid example.

"Imagine that in a community, there are two identical wells of water at a distance of 100m from the houses. One of the wells is accompanied by a hand pump, and the other, only a pulley to draw water with a bucket and rope. The water level in both wells is 8m below ground level. The time to fill a bucket by rope/bucket and the manual pump is the same for one adult. When the pump malfunctions one day, the community is forced to use the well with a bucket and rope.

“The advantage added by the well covered with a pump is that the water is purer because it’s more challenging to introduce microbes whereas, in the case of the open well, each user introduces their bucket and rope and contaminates the well. However, as the germs are not visible, the community isn’t worried.

“For [the] majority of users, the pumped well has no advantage compared to the open well. So that the people invest in maintaining the water supply, clear benefits for the system must exist.

“Our pump demonstrates these advantages. The SL-Pump can eject water with such pressure that it pumps directly to an elevated tank for domestic use. From this tank, the water can arrive by gravity to a tap in the kitchen sink or pass by a water heater and deliver hot water to the shower. The pedal, with minimal effort, can be used for micro-irrigation. Because it is a simple system, it will be fixed by users within the family in case of a malfunction."

Kandeh's community approach is shared by the EMAS technology, which is 'a self-supply concept that entails local public or private initiatives by individuals, households or community groups to improve their own WASH (water sanitation and hygiene) supplies, without waiting for help from governments or non-government organisations.'

Conceptualized by Wolfgang Eloy Buchner, EMAS is a mobile school for water and sanitation based in Bolivia — where Kandeh did a diploma. While his initial water pump technology was inspired by EMAS, he adapted it significantly to the Sierra Leonese context.  “The EMAS pumps are purposely made only for household use, while mine is for both household and community use, based on the quantity of water it produces. EMAS pump ejects water from the pumping handle while my own system has a separate outlet,” said Kandeh.

Several NGOs and international charities in Sierra Leone are working on WASH issues. However, what differentiates Kandeh’s innovations is that he works with the community, not for them.

"The political interests of companies or even the state's administrative structure don't aid the community to learn to solve their own problems using environmentally friendly, simple and cheap methods. Many believe that all community water systems need to be created by a specialist. This needs to change,” said Kandeh.

Over the years, he has partnered with several NGOs and organizations such as ‘Walking for Water’, Hope Spring, UNDP, etc — all of whom have consulted him for his expertise and access to the community as well as funded some of his projects.

But he wants to stray away from any corporate or political investments — which can be bureaucratic in Sierra Leone. He mentions that he has received acknowledgement from the state, which has made previously challenging operations much smoother.

While bureaucratic challenges are something he is used to, continued deforestation and climate change pose a larger challenge to his solution, as rising temperatures mean there is less groundwater recharge.

Kandeh continues innovating his technology to make it cheaper and more accessible. “Currently, I want to find a more readily available alternative to PVC pipe as if it malfunctions, people have to go to Freetown to buy it.” Kandeh is also unsure how sustainable the crowdfunding model is, having faced serious challenges during the Covid-19 pandemic.

A Future Full Of Safe Water

In the future, Kandeh wants to be able to replicate and adapt his technology in other African countries and address other WASH issues. He is in talks with networks in Nigeria and Senegal. In 2019, he designed an odourless washroom, a biogas toilet and an iron filtration tank system.

Most of all, however, he wants to expand his network of young water professionals across the continent, a growing group he already has in place in Sierra Leone which includes seven university volunteers and 20 trained technicians from rural communities.

“I want to see everyone regardless of gender, colour or where they live have access to safe and clean drinking water.”

Kandeh’s vision already finds purpose in many communities. As village Headman of Rogbanbga, Abdul Barie, said, “Benson’s water pump has created a solution for a problem that we thought we would have to live with all our lives. It is a blessing in disguise.”