ISSUE
13
-
How do we apply food safety standards to insects?

Digital Collage Artist:
Adley Albuquerque
Insects will play a bigger role in human diets in the decades to come, but eating the sustainable protein will invite a whole raft of regulatory questions
by
Tabby Kibugi
1/23/2023

‘What’s worse than finding a worm in your apple? Finding half a worm!’

This popular joke has long summed up the western attitude towards eating insects, even though eating insects is very common in different parts of the world. In fact, 140 countries consume approximately 2,111 insect species; for people looking to get their fix of bugs, they’ll most likely tuck into beetles, caterpillars, ants, locusts, scale insects and termites. Yet edible insects remain an unpopular but slightly intriguing delicacy in western countries, as people struggle to overcome the ‘ick’ factor and inevitably because insects are often viewed as ‘poor man’s food’.

But the firm ground that gave root to these attitudes is starting to give way, or at least rumble. A study published by NFS journal in 2020 revealed that developed countries are gradually opening up to the idea of eating insects, as consumers are now increasingly aware of the nutritional benefits. Even Hollywood stars like Nicole Kidman and Zac Efron have experimented and embraced bug eating, while Angelina Jolie has been quoted as saying that her children eat crickets like they are chips.

The global population is expected to hit nine billion by 2050, according to a 2019 United Nations report, and during that time demand for food is likely to increase by 60%, fuelling concerns over whether the planet’s resources can meet the demands of so many people. Such concerns are forcing us to reimagine our diets and to explore other alternative food sources that are easily available and also nutritious in value.

“People are more aware of climate change and land degradation,” explains Shakara Maggitt, an entomologist and animal scientist. “As a result, they are seeking an alternative source of protein.” According to a 2022 study published in Critical Reviews in Food Science and Nutrition, edible insects offer myriad health benefits compared to domestic animal-based foods due to their high levels of vitamin B12, iron, zinc, essential amino acids and antioxidants. The same study also revealed that adding crickets to the human diet could offer numerous nutritional benefits such as helping our bodies fight and manage chronic diseases like diabetes, cancer as well as enhance our immune function.

A significant body of research suggests insects carry a far lower risk of pathogens and hazards than traditional livestock.

“Along with the increased interest in protein sources, there is also a parallel interest in how insect agriculture can play a vital role not only as edible insects, but also as a way to address circular and regenerative agricultural systems,” says Chef Joseph Yoon, founder of Brooklyn Bugs. “For example, Black Soldier Flies can eliminate organic waste while releasing a negligible amount of methane gas. Their frass (excrement) is an excellent organic fertilizer, and their larvae also passed regulations to be used in pet food and livestock feed.”

Even though there is now greater recognition of the health benefits of edible insects, food safety concerns remain, especially about the mass production and consumption of insects. A 2021 report by the Food and Agriculture Organization (FAO) highlighted various potential food safety issues presented by consuming insects en masse. The report identified the risk of biological, chemical and physical hazards as well as allergens. For instance, several bacteria species associated with edible insects could harbour different kinds of food pathogenic bacteria. In addition, some heavy metals like lead and mercury have been reported to accumulate at low levels in some edible insects and food products derived from insects.

However, a significant body of research suggests insects carry a far lower risk of pathogens and hazards than traditional livestock, according to Yoon. For instance, besides the FAO report, many studies like this 2018 one have reported that it is very unlikely edible insects are more hazardous to us than other animal products.

Either way, regulatory agencies and food bodies will need to fully account for the new challenges posed by implementing food standards for mass-producing and consuming insects. Here’s how that might work at each stage of harvesting and consumption.

Eating insects can be regarded as safe if the insects are properly managed on the farm. From a microbiological point of view, an insect farm that adheres to good hygiene practices during rearing, handling and harvesting could remain free from pathogens.

“Every food company that exports to the U.S. needs to follow the general Food and Drug Administration (FDA) preventive controls,” explains Matt Regusci from ASI Food Safety in Missouri, United States. “The facility should be cleaned, sanitized, and all stages of operations run in a way that minimizes food-borne illness.”

Insect farms should also not be in contact with livestock animals, which may transmit bacteria like Campylobacter and Salmonella. The rearing materials used can also minimize biological risks. Paper egg cartons, which are one of the most common rearing materials, can act as a fertile environment for bacteria to grow.

“Establishing a protocol for the limited reuse of egg cartons can help to reduce bacteria growth,” says Maggitt. “I would also suggest using a biodegradable plastic that is in the shape of egg cartons as well as bacteria testing from the product.”

A controlled feeding program could help reduce the contamination of insect feed by chemicals such as pesticides during farming.

For insects that are being consumed en masse, the most common and effective forms of processing are freezing and oven roasting.

According to Maggitt, freeze-drying the insects first is best to eliminate any moisture and subdues the insects.

Freeze-drying insects involves taking the water content and turning it into vapour, which means that the bugs are frozen and the water transitions straight from its liquid state into gas. This practice helps to prevent microbiological reactions and improves the quality of the final product.

If the insects are being packaged as ready to eat, roasting or frying them afterward will help to eliminate any food-borne pathogens.

Endospore-forming bacteria present one of the most serious food safety concerns during processing. The pores of some insects are resistant to heat and may be able to withstand common processing methods adopted for edible insects. Spore-forming bacteria have actually been found in insects like locusts, house crickets and yellow mealworms. After heat treatment is used, it's important to cool insects properly to prevent spore-forming bacteria from germinating.

The company you are purchasing from should have Good Manufacturing  Practices (GMPs), which refers to the basic operational and environmental conditions required to produce safe foods.

“Make sure they test their products for microbiological and chemical hazards and feed their insects unspoiled foods with zero pesticides,” Regusci says.

Consumers should also steer clear from consuming insects that have been harvested in the wild. “Insects mature quickly and what they consume will be inside of them, like chemicals and heavy metals,” he adds.

Insect farming, harvesting and processing may be very different from other meat and produce production, but Regusci says that basic food safety principles should not change: “As insect food production increases, a company like the Food and Drug Administration (FDA) will probably start working with key players to start creating recommendations for quality, safety and traceability.”

Maggitt, on the other hand, says she feels that the standards should only differ in the transparency of rearing, harvesting and producing farmed insects. She says that to encourage people to engage positively with eating insects and to break down our preconceptions — namely, the ick factor — producers need to be transparent.

While public perception and legislation regarding insects are beginning to change, the ethical implications of consuming insects are yet to be fully considered. A July 2022 study revealed that insects experience nociception — the detection of potentially or actually damaging stimuli — through their sensory nervous systems, which means they may experience pain to a greater extent than we’d previously believed.

However, Regusci believes that we still need to conduct more research on how insects and their larvae react to pain. “Right now, the processors are either freezing or instantly blending the insects so the processing is the least painful. Ultimately, more studies will provide the best practices in the future.” 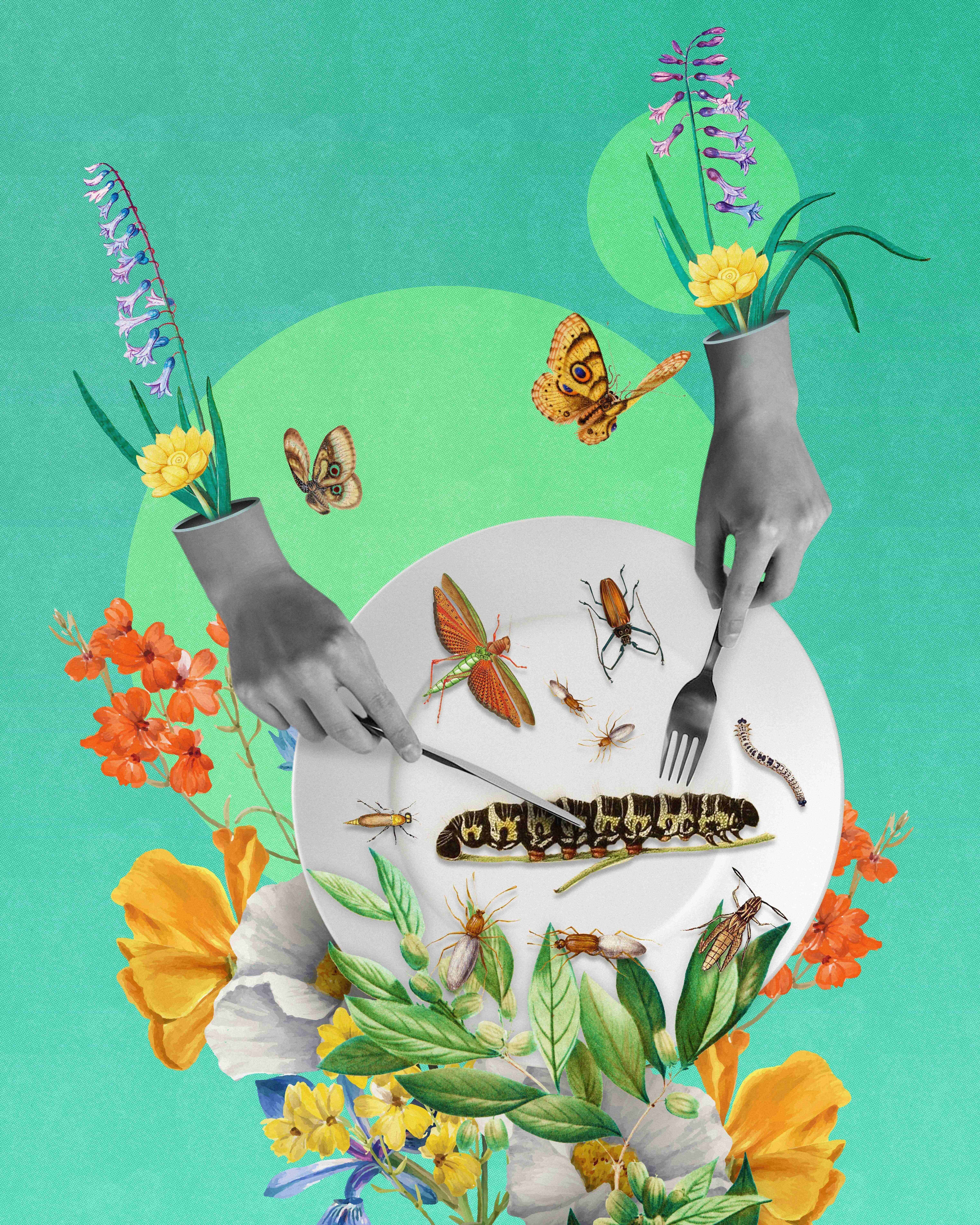 This worm is the last line of defence against malnutrition
Thousands of families across southern Africa camp in woodlands for weeks to harvest the mopane, which is a vital source of protein. Now, social entrepreneurs spy an opportunity for this emperor moth to go mainstream
John Gaisford
1/16/2023
Sign up to receive a monthly update from Sliced.