No items found.
Product is not available in this quantity.
Shellfish
Holding On By A Thread
An alien invasion of the Zebra Mussel is unleashing devastation few comprehend.
Eric Kukulowicz
4/19/2018 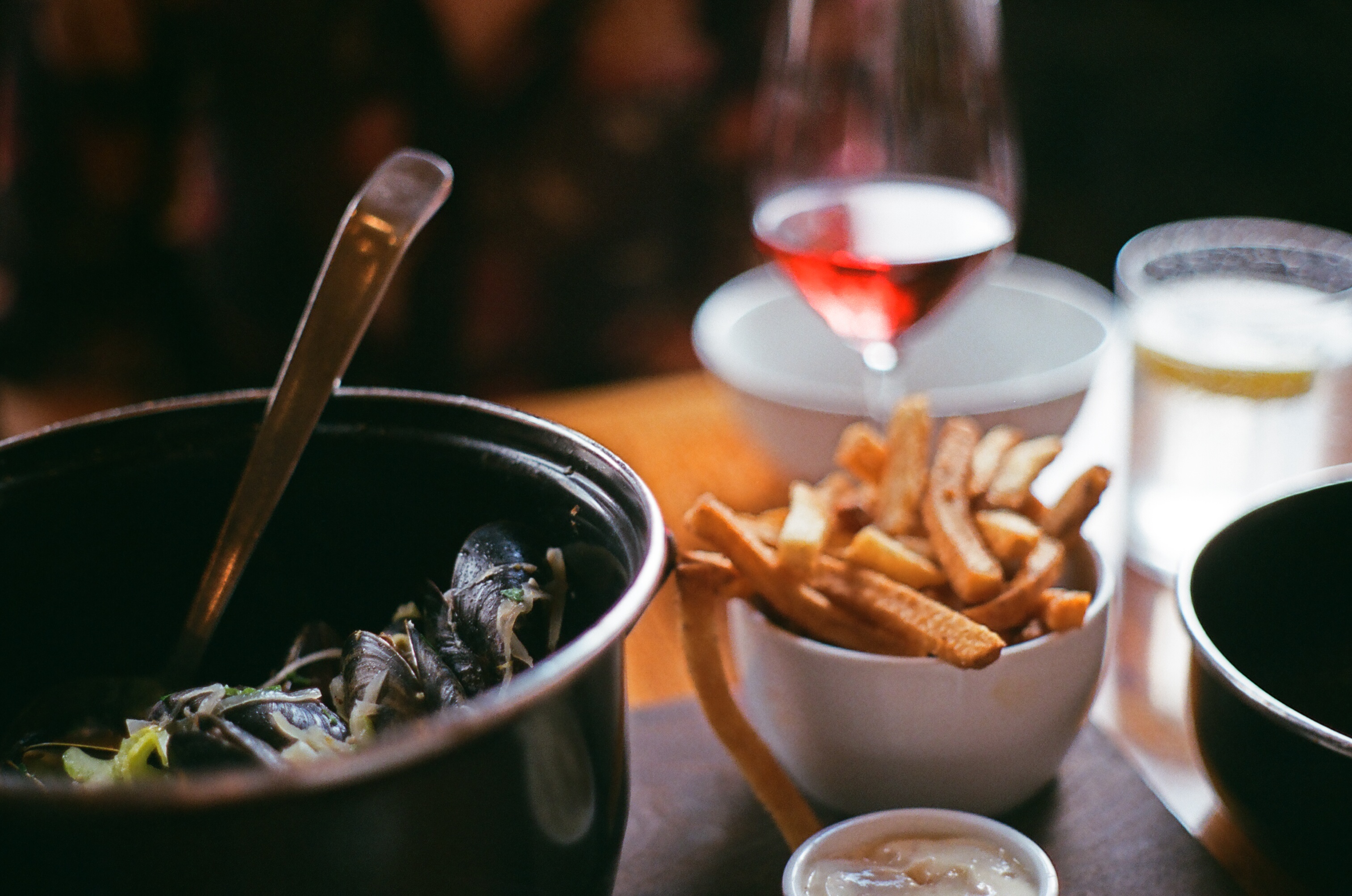 With ingredients scraped from the docks of Lake Minnetonka, a new beer is on tap at Excelsior Brewing Co. in Minnesota.

The beer, flavoured with the shells of Zebra Mussels and the stalks of Eurasian Milfoil, forces the question; has the craft beer movement gone too far?  Or, the more serious question, what are these species, which originated in Europe, doing in North American beer?

The Invasive zebra mussel was introduced to North America in the late 1980’s and has since waged a vicious onslaught against native waterways. These freshwater mussels were sucked out of their native habitat in the Black Sea, carried in the ballast of an ocean liner through the Mediterranean, across the Atlantic, and eventually dropped in the Saint Lawrence River.  Once a population was established, the bivalves spread rapidly.  With one adult female producing 1.6 million microscopic larvae (veligers) each year, outbreaks quickly overwhelmed inland water bodies in the east. A plague to any fishing community, the mussels spread with biblical ferocity across North America. Aided by the occasional boater, they spread up the Saint Lawrence and into the Great Lakes by 1988, South to the Mississippi in 1990, and were in most of the eastern states by 1996.  They now inhabit nearly every major drainage basin in North America except for the Columbia - where millions are spent each year to prevent contamination.

With one adult female producing nearly one million microscopic larvae (veligers) each year, outbreaks quickly overwhelmed inland water bodies in the east. A plague to any fishing community, the mussels spread with biblical ferocity across North America.

This species is not an outlier.  In our increasingly interconnected, globalized world, human beings are constantly reshuffling and relocating the kingdoms of life around the globe, voluntarily or not. In this uncontrolled experiment of globalization, alien species travel in boat's ballast, traveller’s suitcases, the skins of fruits, and other countless ways.  Given biological life’s tendency to spread, adapt, and intermingle, this relatively new anthropic contribution may sound like it would have benign consequences, but that could not be further from the truth.  The explanation of how a fingernail sized mollusk is upsetting the ecology, environment, and fisheries everywhere is a subtle, but important example of the disastrous consequences of human carelessness.

Invasive species have proven themselves to be more than just an aesthetic problem.  A study by the university of Minnesota estimated 97 billion dollars in damage had been caused by known invasive species over the last century in areas such as agriculture, industry, human health and the protection of natural areas.

Despite being a fingernail sized and immobile mollusk, the zebra mussel causes astounding destruction. Where they exist, they crowd out native species; at present they are threatening the extinction of a myriad of freshwater species including the Rocky Mountain Ridged Mussel, along with other clams and fish.  Latching onto surfaces with strong ‘byssal threads,’ they clog pipes, coat boat’s hulls, layer themselves on docks and interfere with turbines on dams.  The economic effects are severe, with densities of up to 750,000 per square meter, the great lakes region spends an estimated 500 million each year dealing with them.  As filter feeders, they bioaccumulate toxins and provide little food value to North America’s native species.  Additionally, they feed preferentially on certain algae, leaving behind the often toxic blue-green algal blooms which transform the local ecology, not to mention ruining the beauty of beloved lakes.  In areas where they are well established, such as lake Michigan, the water has visibly cleared due to their extreme ability to filter feed. Vivacious eaters of zooplankton, a vital food source for aquatic creatures, these mussels consume more than their fair share, leaving fish, birds, and other shellfish without food and causing population collapse.

The economic effects are severe, with densities of up to 750,000 per square meter, the great lakes region spends an estimated 500 million each year dealing with the Zebra Mussel.

Yet, the Zebra mussel is a humble mollusk. How can a single species cause this amount of devastation, especially in a water which it was not specifically adapted for?

When a species evolves, it fills a niche in its community and has a relationship with the local predators, prey, and competitors.  As a prey adapts to evade the predator, the predator adapts to better catch the prey in a sort of evolutionary arms race.  In a mechanism called ‘predator release’ the prey spreads to a new location and leaves the predator behind.  If the new location of this species allows it to live, or even thrive, it now has no predators specially adapted to capture it.  This allows the prey to do extremely well, crowding out any competition.  For example, consider Purple Loosestrife, a brilliantly purple plant, that is another invasive to North America. In its native habitat, beetles and other bugs feed on it thereby keeping its population in check, but in it’s new territory - North America - it is free to grow and spread.  It has done extremely well, dominating huge swaths of wetland, and out competing native plants, like cattails. As a plant that sucks up lots of water, it has also caused problems for agriculture by consuming a resource that what would have been used for crop irrigation.

Another mechanism that can allow invasive species to do wreak havoc is a corollary of the above.  When a predator moves to areas that have prey not evolved to evade predators, these alien species thrive on a bounty of easily caught food.  In New Zealand, a country with no native mammals, the introduction of rats, cats, and stoats has been devastating for to bird populations, with dozens of extinctions and many more species which are on their way to oblivion.

So, why does this matter? Specially why should it matter to a magazine that is primarily focused on food production and consumption? In reality, it matters more than most can conceive.

So, why does this matter?

Our uncontrolled experiment in globalization, a trial that has resulted in the laissez-faire reshuffling of entire animal kingdoms, has lead to a breathtaking loss of biodiversity. Facing unprecedented species loss, we are currently in what some scientists deem ‘the sixth mass extinction’. The consequences cannot be underestimated. As this month’s article on the extinction of ocean mollusks details, even seemingly insignificant species play a vital role in the survival of our planet.

Yet, let’s bring the topic home with a focus on the bite-sized manifestations of this problem. Over the past decade, lakes across Minnesota have fell prey to the invasion of the Zebra mussels. The mussels have invaded at least 275 lakes and rivers, and infiltrate around 20 to 30 news lakes each year. Due to the resulting devastation of fish populations, in many lakes, the fishing of Walleye has been banned to protect fish stocks.

Our uncontrolled experiment in globalization, a trial that has resulted in the laissez-faire reshuffling of entire animal kingdoms, has lead to a breathtaking loss of biodiversity.

A blow like this would be challenging to any fishing community. In a state that rests largely on the $5 billion-a-year summer tourism and fishing economy, it is devastating. Additionally, as a state that prides itself on famous Walleye fish frys, the consequences of the Zebra mussel invasion is a deeply personal insult to the identity of thousands of people. In this case, the invasion of an alien species not only wrecks ecosystems, it is also a tragic reality faced by recreational and commercial fishers, foodies, and those who have built community from Minnesota traditions. Regardless of how innovative, this tragedy cannot be rectified over a pint, even if this pint does utilize the shells of Zebra mussels.

In 2017, a partnership of 70 federal, state and tribal authorities in the U.S. allocated $9.7 million to tackling the Zebra mussel invasion. Across North America, innovative projects to protect native ecosystems abound, however, the most effective tool to combat our ‘laissez faire’ reshuffle of animal kingdoms is a change in how we approach fishing and boating. To become more responsible guardians of our waterways, knowledge and understanding of this issue should be spread.