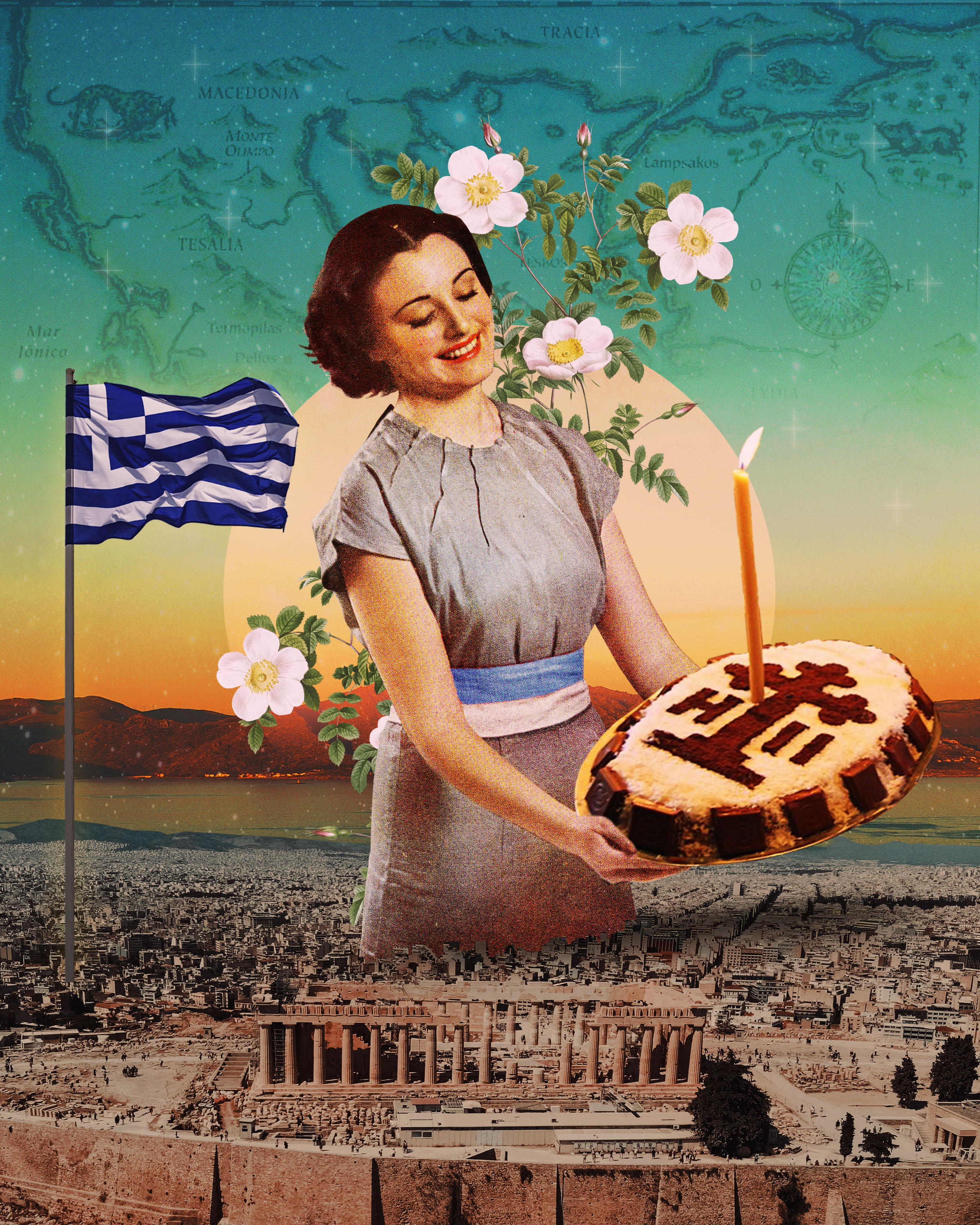 Digital Collage Artist:
Frank Marin
Traditionally, koliva is only eaten during times of mourning, but Greece’s culinary trends are challenging millennia of tradition.
by
Alex Katsomitros
10/3/2022

Food presented on morning TV does not distinguish itself for its quality or sophistication, but rarely does it offend, either. And yet, this rule recently found a notable exception.

When Matina Pagoni, a GP representing the Athens hospital doctors’ association, appeared on a Greek morning show in January 2022 to talk about the pandemic, a bitter surprise awaited her. As an ill-judged joke, one of the hosts offered her koliva, a wheat-based dessert served at Greek Orthodox funerals and memorial services. As a “superfood”, it made for an ideal breakfast, explained one of the journalists. Ms. Pagoni, who has become a household name in Greece during the pandemic, begged to differ. “Don’t come close,” she uttered while pointing at the bowl with barely hidden irritation, adding: “I am superstitious. Have I come to a funeral?”

While koliva is both visually and gastronomically unassuming, it is by no means a Proustian madeleine; there is nothing inherently romantic or irritating about it. However, in Greece and other Orthodox countries, many people are very sensitive about the dish due to its association with death and the afterlife. If the pandemic has forced us to grapple with human mortality, in an era when scientific progress has turned it into a taboo, eating a food that represents death and mourning is just too hard to swallow, even for scientists.

The ingredients symbolized the vicious circle of life and death.

As expected, Twitter and Facebook — digital purgatories where modern scandals can spiral out of control or quickly fizzle out — exploded in a bout of holy rage. In the Greek-speaking corners of Twitter, younger observers and older citizens full of religious fervour were gripped by the sacrilegious frivolity of the incident. Was this a culinary scandal? Blasphemy? A faux pas that mocked the doctors fighting Covid-19? Perhaps a political statement against the government? Some found the gesture completely offensive. “How can you offer koliva live on TV at the peak of the pandemic with so many dead and funerals daily? You have no respect!” erupted one member of the Twitterati.

Modern Greeks tend to sprinkle their dishes with a dash of ancient glory, ascribing their recipes to their famous ancestors, for marketing purposes as much as anything else. However, koliva is one of those rare gems whose origins can be credibly traced back thousands of years. (Also, few tourists would be offered koliva at a tavern.) As a gift to those departing to the other world, ancient Greeks would offer to their Gods a dish containing wheat, raisins, and nuts, not unlike modern koliva. The ingredients symbolized the vicious circle of life and death, as well as the Gods who kept it moving into eternity. Wheat stood for Demeter, the Earth goddess. Her daughter, Persephone, Hades’ wife and queen of the underworld, was represented by pomegranate, ever a bloody affair, while raisins conveyed the festive spirit of Dionysus. A koliva-like dish was also offered to Demeter to thank her for good harvests, a custom known as ‘panspermia’.

The name itself attests to koliva’s ancient roots. In classical Greece, kollybos was a wheat kernel which was used to make small pies offered during funerals. It also stood for a small coin, one that was often placed on the deceased’s tongue, a symbolic fee paid to the boatman carrying souls to the other world.

When Christianity spread throughout the eastern Mediterranean, it swept away the old Gods, but not their recipes. The prophets of the new religion would not win the hearts and minds of the sinful pagans if they had to change all their eating habits as well. As with other dishes and customs, the Christian Church adopted koliva, but tweaked its symbolism. Wheat would hitherto represent the earthly transience of the body and the everlasting nature of the soul that one day will rise once again, just like grain seeds fertilize the soil.

It’s a tradition that has endured almost intact in many Orthodox countries, including Greece. In its modern form, koliva is served during funerals and memorial services, with oodles of soft-boiled wheatberries spread on a cloth or forming a heap that symbolizes the earth. They are accompanied by several sweeteners: pomegranate seeds, currants, pistachios, parsley, sesame seeds, almonds, walnuts, cinnamon, raisins, and anise. Powdered sugar paste is added on the top, with the initials of the deceased or a cross strategically placed in the middle. Believers also eat it at annual feasts and holidays, such as Epiphany, the Saturday of Souls, and the first Friday of Great Lent.

The long thread that links modern Greek cuisine to its ancient roots passes through the fiercely Greek Orthodox Byzantine empire and its pious recipes. One of the bastions of this culinary heritage is Mount Athos, a peninsula in northern Greece dotted with monasteries where women are not allowed to enter and the monks cook everything themselves, often with the simplest ingredients.

Axiotis’ recipe represents how younger foodie generations are rediscovering koliva. Food blogs promote it as a superfood and celebrity chefs present koliva recipes with a twist.

When chef Kostas Axiotis visited one of the monasteries five years ago, he noticed that the monks would eat koliva as a dessert, in memory of the deceased. This was a culinary awakening like no other. Impressed with the uniqueness of the dish, he turned it into a salad, with koliva accompanied by fresh vegetables and chicken. This unholy alliance of sweet and sour is currently served at Koukouvagia, the restaurant in Patras, Peloponnese, where Axiotis works. When the salad was first included in its menu, many customers were hesitant, wondering about the purpose of such an innovation. But those who dared to taste it overcame their superstitions and gave it rave reviews. The dish soon went ‘viral’, according to Axiotis, and has been adopted by other restaurants in the region.

Axiotis’ recipe represents how younger foodie generations are rediscovering koliva. Food blogs promote it as a superfood and celebrity chefs present koliva recipes with a twist. One reason why it has become fashionable is that it’s rich in fibre and therefore deemed healthy, says Antonia Matalas, who teaches nutritional anthropology at Harokopio University in Athens. Contemporary trends such as these are reassessing the country’s culinary roots through a new lens.

One reason why the superstition persists, according to Matalas, is an urban legend that people have been poisoned after eating koliva at memorial services, since it has to be consumed fresh.

It is a strange second life for a dessert celebrating death. For many, it is taboo to eat koliva on any occasion other than a memorial service. Food that conjures the macabre can unsettle the collective memory of older and more religious generations, as demonstrated by Ms. Pagoni’s TV appearance. Such taboo-breaking fires up gastronomical scandals and heated debates about the holiness of culinary mores.

The stigma persists even among younger Greeks. When participants in the 2022 edition of reality TV cooking show Masterchef were asked to prepare koliva as a dessert, some found it odd. “It can be awkward to make koliva out of a religious context,” Matalas says. “There is a direct association with death.” Her aunt boils koliva-like wheat for breakfast, but she wouldn’t ever dare call it by its name. One reason why the superstition persists, according to Matalas, is an urban legend that people have been poisoned after eating koliva at memorial services, since it has to be consumed fresh.

Whether the rediscovery of koliva results from a new-found religiosity expressed in culinary ways or the decline of religion and its traditions is unclear. All generations appropriate and recreate what came before, but it is also true that many European countries are experiencing intergenerational contests over cultural change. One clue is that younger Greeks are less pious today. A 2020 survey by Pew Research Center found that although Greece is Europe’s most religious country, just one out of three young (18-29) Greeks believe that faith in God is connected to morality. “The young would not care, just the older ones,” Matalas says of koliva’s religious connotations, noting that other foods traditionally associated with religious feasts are becoming more fashionable — such as Greek festive breads. Nor is this unprecedented. From pretzels to risi e bisi — a Venetian pea risotto that was traditionally served on St. Mark’s Day — and Mexican pan de muerto, there are many examples of dishes that have shed their religious and cultural role to enter the culinary mainstream.

Ice cream to die for

In 2016, at the peak of the Greek economic crisis, the Athenian patisserie Lateau was feeling the heat. Demand for catering services for weddings and baptisms was waning. However, koliva remained popular, even if it was not actively advertized. Its characteristic smell, a blend of crackling sesame and boiled wheat that excites the nose, would forcefully usurp the attention of customers, reminisces Lateau’s owner Michalis Galanakis. Many customers would ask for a spare bowl. “It’s a unique dessert. You can’t order it, because it has to be eaten fresh,” Galanakis says. “And because it’s associated with death, it’s difficult to find it. You would have to go to a funeral or a memorial service.”

With the crisis hurting customers’ incomes, it was time for Lateau to experiment. Its ice cream offerings took a wild turn, with new flavours including ouzo, feta and whiskey; koliva was an obvious option. A blend of the wheat-based dessert with vanilla ice cream became an instant hit, with lines forming at Lateau’s unassuming storefront. “At first, people were shocked. It seemed strange to them,” Galanakis says, adding: “But many wanted to experiment. We now have customers frequently buying loads of it.” As expected, some still resist. “It’s an overreaction, but some people avoid eating it,” Galanakis says.

Even the older generations seem to be warming up to the idea. Just a few weeks after the infamous incident, Ms. Pagoni visited Koukouvagia, the restaurant in Patras. When she was offered Mr. Axiotis’ famous koliva salad, she thought it was just another joke, but was eventually persuaded to taste it. According to local media, she loved it.