ISSUE
-
Fire
The Freedom of Cooking with Fire 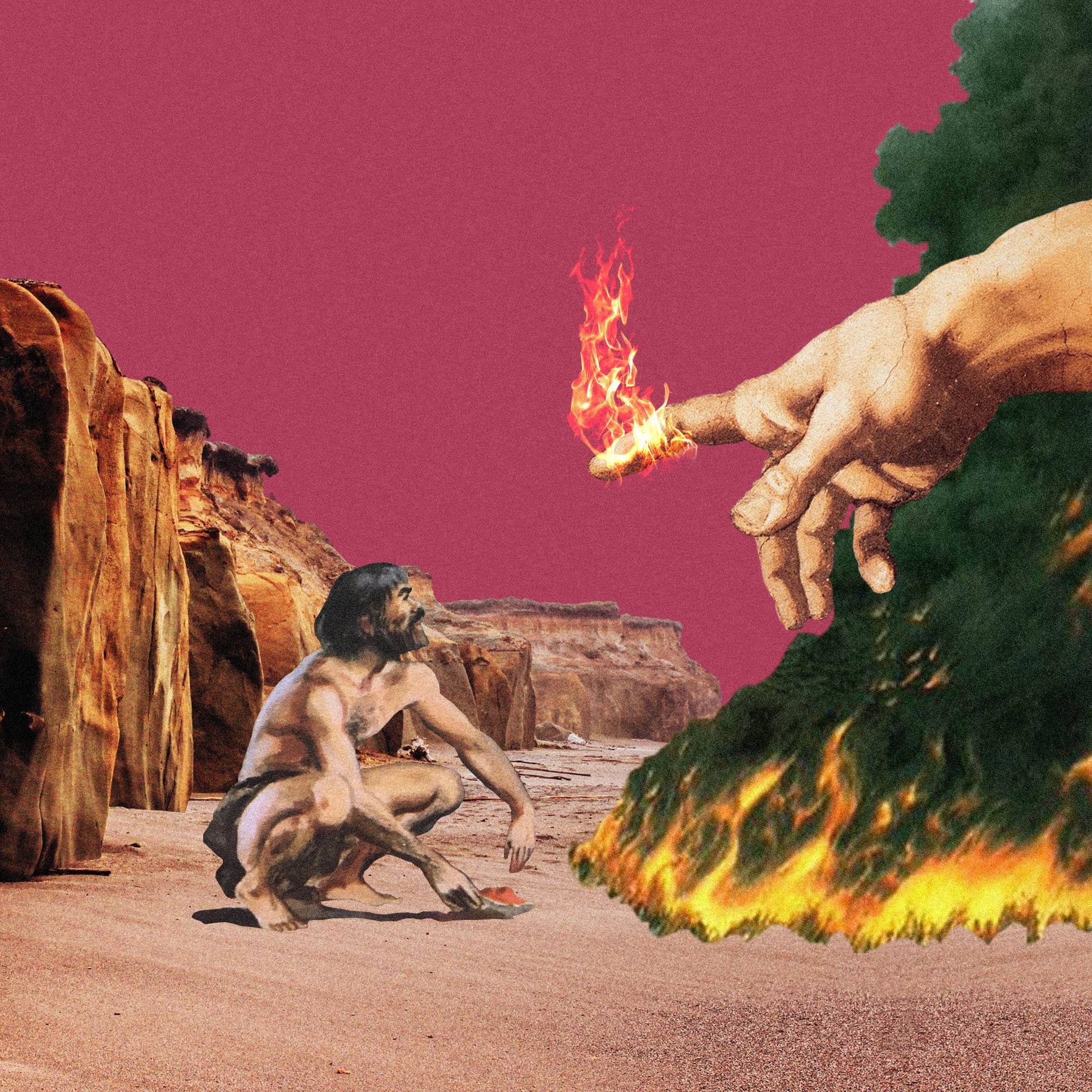 Digital Collage Artist:
Arfie Rovexotte
As I grew older and began cooking for myself, it became clear that this feeling of ‘magic’ relates to the way that fire removes formality from cooking and creates a social space. Indeed, contemporary anthropological thought views fire similarly.
by
Natalie Dunning
7/15/2021

In the summer of 1998, my dad decided to cook a hog roast for my mum’s birthday party. This was my first experience of cooking on an open fire, and it left a lasting impression. The party was beach-themed, but also a costume party. So the choice of a hog roast in a small suburban yard made as much sense as the arbitrary event. After trying some of the hog roast—salty, greasy, charred, delicious—I was ferried off to my grandparents’ house early in the evening so that my parents could enjoy the party.


While I was being chastised at my grandparents' dinner table for licking my knife, my parents and their friends were committing Lord of the Flies-style acts of desecration against the pig. When I came home the next morning the barbecue embers were still lit and littered with cigarette butts. There was a cigarette put out in the eye, an unlit cigarette poking out of its mouth and various cutlery poking out of the remainder of its belly. Later, my grandma, with postwar practicality and 1990s food hygiene awareness, took the outer layer of flesh off and carved a few plates of meat to freeze.

A few years later my Grandma served us a pork curry. After eating she mentioned it had been made with the leftover pork from the hog roast. Dad immediately ran to the bathroom, recalling the party guests using the snout as a makeshift ashtray and serving themselves by tearing off fistfuls of flesh. For some reason, what had seemed acceptable over the fire that night was nauseating at the dining table.

This incident speaks to a feeling many of us are familiar with: there’s something about cooking with fire that changes the way we behave. It’s a suspicion only reinforced at barbecues where chefs use hands instead of tongs, or where friends who live on takeout become experts on hickory chips. The effect fire has on people is, of course, noticed by chefs.

“I think people who don’t cook often in their everyday lives still see cooking with fire as some sort of magic,” says Ciara Tracy, who worked as a wood fire pizza chef in Vancouver before returning to the U.K. “[There’s] something about taking it back to the early days of ‘changing the chemical nature of food’ aka ‘cooking’ [that] stirs up the caveman in people. And I’m happy to be a magician.”

As I grew older and began cooking for myself, it became clear that this feeling of ‘magic’ relates to the way that fire removes formality from cooking and creates a social space. Indeed, contemporary anthropological thought views fire similarly.

“Cooking with fire—is a cultural and social act dating back at least 200,000 years. ... Cooking has shaped us, physiologically, emotionally, culturally, and socially. We are omnivores, and more importantly, cookivores who eat rather than feed, build our social relations, sense of community, and cultural identity through the aesthetic act of cooperatively making ingredients into meals to share." says Dr. Gillian Crowther, author of Eating Culture: An Anthropological Guide to Food.  “[F]rom salmon barbecues in Pacific Northwest coast indigenous communities, through the barbecue restaurants of many cuisines, to back garden hibachis in suburban Britain, we exercise our cookivore status again and again.”

The term ‘cookivore’ is used throughout the social sciences to describe the evolutionary step humans took when we began cooking food with fire. Humans have been cooking with fire for at least 200,000 years, so ovens and gas ranges are relatively recent tools in our history. According to the World Health Organisation (WHO), approximately three billion people around the world still cook their meals over open fires.

Citing small fires for cooking as a major threat to air quality and health seems strange (when we know that more air pollution is caused by the world’s richest 1%). It also conflicts with the cultural importance of cooking with fire. “[Y]ou see [fire cooking] more in communities, cultures, and nations that position themselves and the natural world in more dynamic relation to each other,” says Sarah Duignan, host/creator of AnthroDish podcast and Ph.D. candidate at McMaster University. “Thinking about how communities understand nature, and how that extends to cooking practices gives more nuance and moves away from the whole ‘man the hunter’ mythologies we've socially shaped our evolutionary history to take.”

While open-fire cooking tends to be based in nature, taking cooking out of the kitchen helps to remove a lot of the cultural baggage. The trope of the ‘man being in charge of the grill’ certainly contrasts with traditional gender roles, in which women are expected to cook in the home. Duignan argues that “We have a tendency to frame kitchen cooking as this peaceful bonding experience and a place to share recipes, but it's also a space that holds a lot of negative cultural histories and social experiences, too.”

Does removing cooking from the history of the kitchen give people more freedom to engage?

“[Y]ou have the important social elements of who is also traditionally going to be contained in kitchen settings: Black women working as house servants in the 1900s, stay-at-home mums in the mid [20th] century to today, and now migrant workers who double as nannies and housekeepers,” Duignan notes.

Cooking outside levels the playing field because it removes historical baggage. At barbecues people tend to serve themselves, there’s no real power differential. This allows people more space to act as an individual rather than in a social role. But would this be the same dynamic if an oven was placed outside, or is it the fire itself that changes our perception?

While billions of people worldwide primarily cook on open fires, in the West we mainly tend to use fire when barbecuing. This context of leisure (and novelty) makes cooking with fire an event, rather than an everyday task. The novelty of cooking with fire also fascinates us. In Tracy’s experience of cooking with fire in a kitchen, “people tend to leave you alone a lot more when you’ve got a fire to tend to.” However, she says that “they do tend to stare a lot but that’s just fires isn’t it?” It seems that even without the social, outdoor element, we still behave differently around cooking fires. So why do we stare at open flames more than we would a boiling pot?

In an interview with Live Science, Daniel Fessler, an evolutionary anthropologist at the University of California, explains that people from Western cultures, who no longer typically cook on an open fire, are likely to react differently to fire because they haven’t mastered it. "The motives that drive fire learning are only incompletely satisfied … with the result that, throughout life, fire retains greater allure or fascination than would normally be the case." This is backed up by field research which finds that interest in fire declines in adolescence in cultures using open-fire to cook. For children who are given tasks like maintaining a cooking fire, it just becomes another chore.

It’s easy to see how our fascination with fire and the novelty of open flames can lead us to behave so differently—like possibly using a cooking space as an ashtray. We loosen up around fire and drop all the inhibitions we’ve accumulated since humans first mastered the flame. While my family never hosted another hog roast, barbecues and campfires will always be the setting for memorable gatherings and culinary experiments.