ISSUE
-
Fire Up The Oyster Roast 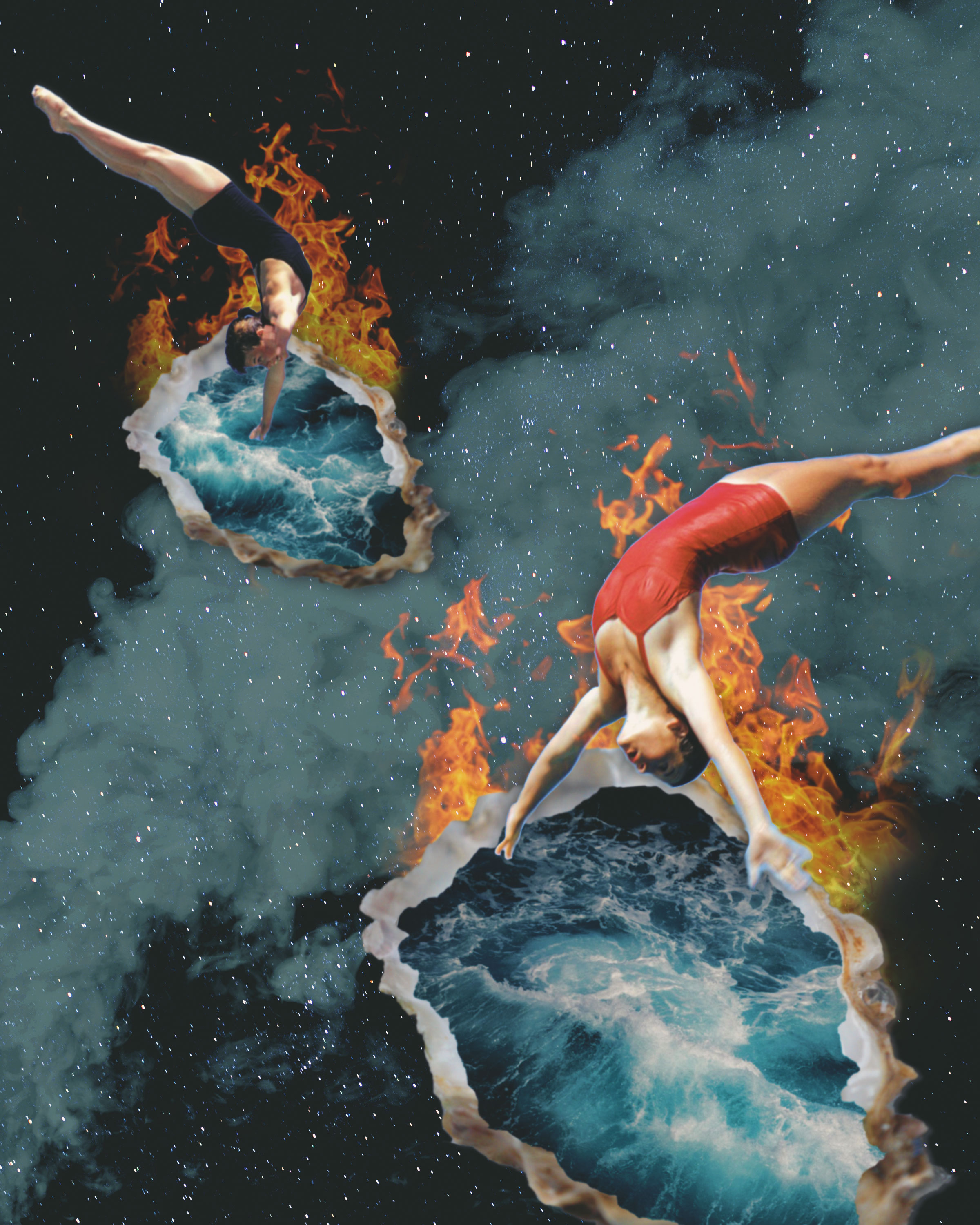 Digital Collage Artist:
Khyrstyna Zarevenna
Today’s farmers have developed disease-resistant breeds, fought off parasites and pollution, and created a global supply chain. But now, the industry faces its biggest test—the climate crisis. The oyster industry could play a role in mitigating the crisis’s worst effects, as long as it can survive.
by
Jessica Farthing
7/15/2021

There are few things in life that beat an outdoor oyster roast, watching as the wood smoke curls around a wet burlap bag that’s soaked to steam the salty bivalves right in the shell. This is the most common way of preparing an oyster roast on the coast, where the smell of burning wood and charred shells is synonymous with fall and cooler weather.

Preparation is slow and time-consuming, but it enriches the experience. Tinder lights the split logs that criss-cross the firepit floor. For the talented brick mason, these pits are an art form.

As the blaze quickens, the coals’ red-orange glow evokes the glory of a setting sun just over the water. When the coals are ready—alive and burning but contained—a sheet of metal is placed over the fire pit. Families pass this artifact down the generations, countless years of roasts leaving it with the perfect burnished finish.

The oysters are then poured on, and the sack that once contained them is soaked in water and then rests over the shells. Steam rising from the pit pops the oysters open, and only the barest touch of a knife will be needed for slicing into them.

It is fire that ultimately brings the roast together, producing the sights and smells that summon memories of great roasts from years gone by. But with the onset of the climate crisis, fire won’t just roast oysters, but threaten their very existence.

Scientists agree that there is a strong correlation between increasing summer temperatures on land and an increase in the number of wildfires. Recent evidence suggests that the increasing level of brush and forest fires is harming the environment that produces this sustainable food, threatening its habitats and the industry itself.

For instance, during Australia’s devastating 2019-20 bushfires, oyster farms were forced to suspend harvesting in New South Wales. The wildfires—which covered 7 percent of the state according to the NSW government—polluted waterways in the region, and also destroyed vital equipment. In some cases, the blazes left dead animals rotting in lakes.

When fires burn out of control, they destroy the trees that protect watersheds from sediment. The fire itself creates sediment full of ash that washes into neighboring streams and rivers, running downstream into the ocean habitat—raising the levels of heavy metals and silt. Sediment levels after a fire can remain elevated for up to ten years after the burn.

While the climate crisis’s wildfires put oysters in serious danger, the oyster’s place in our waterways and oceans can offer hope as the climate changes.

Bob Rheault, the Executive Director of the United States East Coast Shellfish Grower’s Association, uses his PhD and more than 25 years of experience growing oysters to assist the commercial growers in his area.

“I support a bunch of hard-working folks who are growing probably the most sustainable protein on the planet. With just the act of growing clams and oysters, the environment is improved.”

Oysters filter the waters in which they live, eating microscopic plants and particles. They are remarkably adept at sorting the good and the bad.

Reefs comprise thousands of oysters bonded together in clusters to protect the spawn of fish and crabs from large predators. Their attachment provides a natural buffer from erosion, blocking waves, and preventing sand from shifting during storms. As the climate crisis makes hurricanes and cyclones stronger and more dangerous, this function will be especially important. Studies from the Gulf of Mexico found that the power of waves can be reduced up to 93 percent from contact with a reef.

Natural oyster reefs are dying at a disturbing rate—85 percent of oyster reefs worldwide have been lost completely. Water quality, overharvesting, and the effect of coastal development on habitat all contribute significantly to their destruction.

The threat from wildfires was particularly unwelcome as the climate crisis was already harming oysters. Warming oceans endanger oyster production, and therefore a potentially vital tool for managing the effects of the climate crisis. Oceans absorb carbon dioxide (CO2) in the air, and as the level of CO2 in the air increases with climate change, so too does ocean acidity. This slows the speed at which oyster shells develop, and the acid eats away at what little shell can grow. The lower ph level makes it hard for oysters to build their calcified shells and harms other organisms living in the changing seawater.

Wildfires are generating more CO2 for oceans to contend with, further increasing levels of ocean acidity. In California—an oyster-growing region—it was estimated that in 2017, the deadly and destructive collection of wildfires in the wine country produced more CO2 than all the trucks and cars in the state for a year. In 2020, California’s wildfires generated more CO2 than the state’s entire fossil fuel emissions.

These fires cause debris, smoke, and noxious particles to rain across large areas, including waterways, adding pollutants such as nitrogen and phosphorus to the water. Rheault says nitrogen is needed for the growth of healthy algae, but sometimes there can be too much of a good thing.

“If you get an algal bloom, those algae that are pumping out oxygen like crazy in the day become respirers at night and start putting out CO2. You can see huge spikes of oxygen in the water during the day and low levels at night—called hypoxic conditions—which can cause fish kills.”

High levels of nitrogen can cause harmful algae—such as those that cause red tide—that poison shellfish. The industry has an effective monitoring system to protect consumers, but losing a crop of oysters because there’s too much nitrogen in the water is financially catastrophic for a farmer.

When fires occur, they don’t have to be right on the coast to harm marine life. Fires, followed by heavy rains, fill the watershed that flows through rivers and streams to the ocean. The adage ‘all drains lead to the ocean’ is ultimately true, even if they don’t directly pump into the sea.

Bushfires spread very fine particles across the water’s surface, effectively choking out the small algae that need to float on the surface, which then reduces the level of oxygen in the water. Those fine particles can also clog the gills of shellfish, hindering their ability to filter.

In Australia, the destructive brushfires of 2019 and 2020 were followed by periods of heavy rain. Ewan McAsh, oyster farmer and the founder of operations application SmartOysters, detailed the effect of the fires on the industry.

“Initially oysters died from the suffocating effects of the fine silt caused by ash. The burning of the catchment resulted in poorer water quality. With no vegetation to take up rainfall or slow down watersheds, more ash and silt from soil continued to run off into the rivers. It would take a decade for the river catchment to recover.”

To negate the risk, efforts were launched to control erosion and run-off. With such a large area, it is a daunting task. McAsh says specific strategies have been launched to protect the industry.

“Oyster farmers have been working to make the businesses more resilient through the use of live storage tanks to hold the stock through river closures and using grants to cultivate more efficiently.”

Today’s farmers have developed disease-resistant breeds, fought off parasites and pollution, and created a global supply chain. But now, the industry faces its biggest test—the climate crisis. The oyster industry could play a role in mitigating the crisis’s worst effects, as long as it can survive.

Will fire destroy more oysters than it roasts? Only time will tell.