ISSUE
5
-
Fungus
Ethnomycology: Tracing the history and meaning of fungi 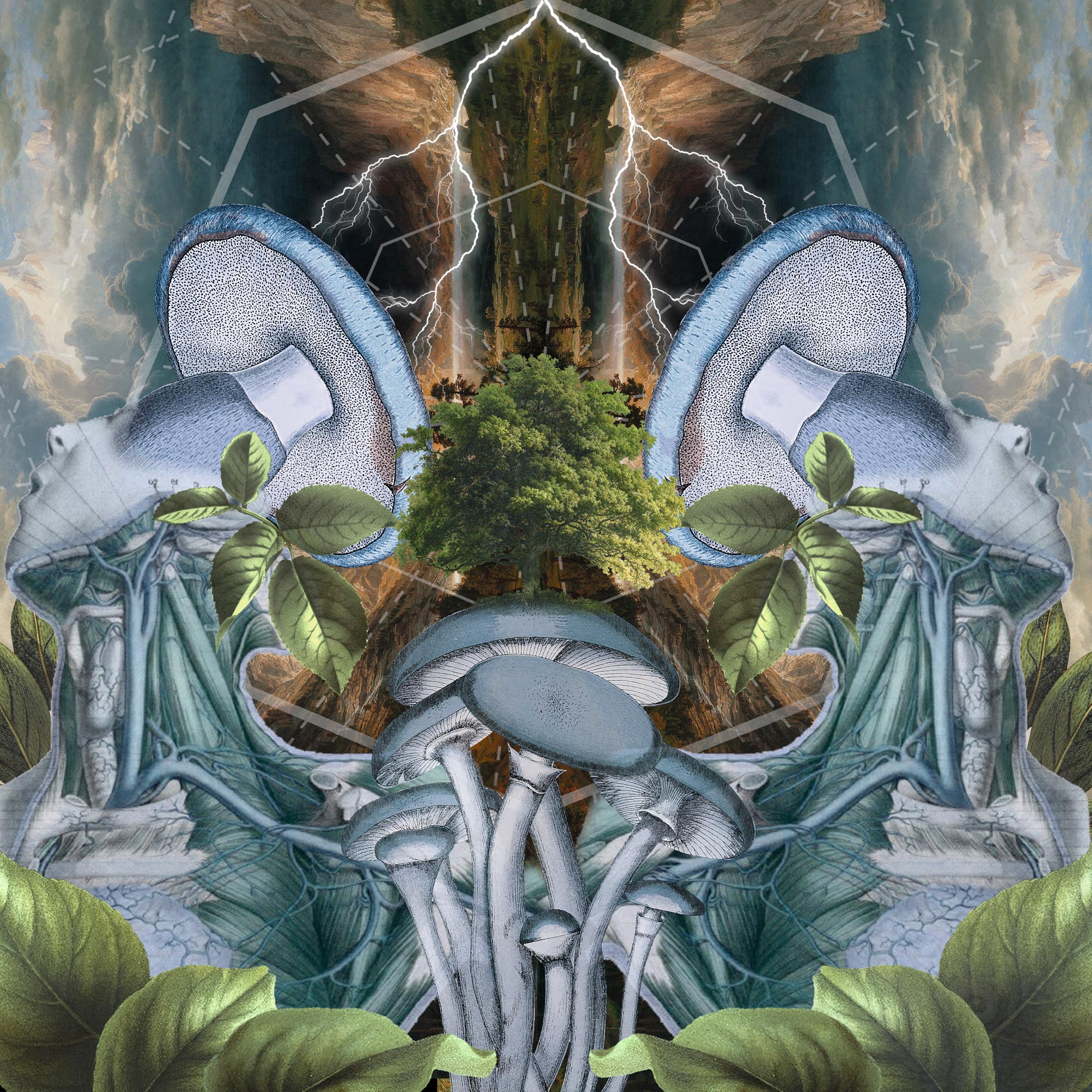 Digital Collage Artist:
Amy Salomone
While most emerging research focuses on how we can use fungal material, Ethnomycology reveals the complex meanings and beliefs humans attach to mushrooms
by
Erik Kõvamees
2/10/2022

If you were interested in studying fungi, what are some possible directions you could follow? As one example, recent research into “flexible fungal materials” investigates the materiality and subsequent biotechnological applicability of fungi—what fungi is made up of and how it can be used. In contrast, fungi may also be examined in terms of their meanings, or what they signify to a given collective of human beings in a certain historical and geographical context. Founded by R. Gordon Wasson, the discipline known as ethnomycology represents the effort to understand the meanings that people have attributed to fungi—especially mushrooms—at specific times and in specific places.

What does it mean to study the significance of mushrooms for humans? Wasson, for instance, has described “a belief that reaches back in time deep into prehistory and in space wherever Eurasians or their descendants have lived.” Namely, regardless of era or locale, there is a widespread association—found amongst many different peoples: Indo-European, Turkic, and others—of mushrooms with lightning and thunder. Whether in Ancient Rome or Greece—or elsewhere “Eurasian tribesmen emigrated,” like Polynesia or the Americas—there has existed the conviction that not only rain, but rain accompanied by thunderstorms (the more forceful the better) determines how well mushrooms will grow; in some versions, they spring up from places where lightning was thought to have struck ground.

In this way, the association of mushroom-growth with thunder and lightning constitutes a folk belief passed on from prehistory through classical and medieval times, and Wasson turns this belief into an ethnomycological object of study. Wasson’s research spans many different contexts and looks at the role this belief plays in everyday practices (medicine, aphrodisiacs, commerce, cultivation), language (common sayings), and mythological rituals (chanting, protective spells).

It turns out that in one form or another, the association of mushroom, thunderstorm, and lightning bolt exists in the Italian Piedmont, the countrysides of France, and in subregions of places such as Iran, Uzbekistan, Afghanistan, Bangladesh, Pakistan, India, Tibet, China, Japan, and the Philippines. This folk belief is also held amongst peoples as diverse as the Malayo-Indonesian cultures of Madagascar, the Bedouin, and many European immigrant communities of the United States, such as the West Slavic (Polish, Czech), South Slavic (Bulgarian), and the Pennsylvania Dutch (who are primarily the descendants of pioneers from the Palatinate, a historical German territory).

A large portion of Wasson’s work is dedicated to describing the role of the given belief in mythological narratives. In the East Slavic world, for instance, one story states that you can only eat a morel prior to the first thunder of spring, because afterwards a snake injects venom into the mushroom, causing it to rot and disappear. In two regions of Tajikistan, there is a persistent belief that “thunder comes when the sky-borne divinity known as Mama, ‘Grandmother’, shakes out her bloomers, and then from her bloomers lice tumble down to earth, and from the lice springs up a crop of mushrooms.” Finally, in New Zealand, Tawhiki—either the son or the grandson of Whatitiri (“Thunder”), a female ancestor of the Maori people—flashes lightning from his armpits, with the sound of thunder signifying the defecation of the Spirits; here, the turd that falls to earth equates to the fungus ball from which a common New Zealand fungus emerges.

From Wasson’s description, the student of ethnomycology can seemingly draw the conclusion that thunder and lightning can either be “bad”—such as when thunder works with a serpent to cast an evil spell—or more neutral in their appearances. But certain conclusions which come from ethnomycological studies are much more difficult to explain. Despite its widespread proliferation, the belief associating mushroom, thunder, and lightning is not held amongst all Eurasian peoples, let alone all world peoples.

For example, although it possesses a Germanic foothold, the belief in question is not found amongst the Anglo-Saxons, nor amongst the ancient Britons, and is therefore not present amongst the English. For Wasson, soundings taken in New Guinea and amongst peoples in Uganda—where the association is not found—confirm to him that the belief has an Eurasian origin, but raises questions such as: How did the folk belief in a relationship between mushrooms, lightning and thunder come about in the first place? Why is it present in some traditions and not others? To what extent did it come about independently in different contexts, and to what extent is it the product of intercultural contact or influence? Wasson speculates that the Chinese conception of a thunder-related mushroom influenced Japanese and Filipino conceptions.

It is also unclear why the details of the association and the type of mushroom change according to the specific context. In certain traditions, for example, the mushroom determined by thunder and lightning is inedible, while in others, it is edible. Sometimes, the mushroom under discussion is a fall mushroom, such as a truffle, while at other times it is a spring one, such as a morel. For the Bedouin, fall storms bring spring mushrooms, while in other cases, the mushroom-storm connection remains seasonal. In the end, it is only within very few traditions that thunder and lightning is associated with the growth of all mushrooms, as in certain variants of the story found in France, Poland, and Bohemia. Finally, once it has been established, why does the association of mushrooms with thunder and lightning always become indisputable? As Wasson demonstrates, a universal characteristic of this belief is the certainty and unchallengeable status which it possesses; its truth is always taken for granted.

Current and prospective students of ethnomycology clearly have much to do. The discipline itself, however, is not only dedicated to studying past beliefs and practices found in distinct world regions. Instead, ethnomycology could just as easily take as its research object the meaning of fungi in the contemporary world, or even concern itself explicitly with all sorts of future semiotic possibilities.

Francesca Gavin, for example, has argued that fungi have been used in the 21st century to help people better understand what it means to be human, and also as inspiration for how to better structure future life. Since mushrooms are significantly beyond the gender binary (apparently possessing 36,000 sexes)—and all that “fungi need to do to reproduce and mix genes is bump into each other and fuse”—Gavin argues that understanding fungi may change the way contemporary society thinks about sexuality, or even “the boundaries of the human” more widely.

Gavin frames this discussion in the context of what could be called mycofuturism. That is, living “in the era of the mushroom,” recent studies of mycelium—“the web-like, vegetative structure from which mushrooms flower”—have made it “the metaphor of choice for technologists to encapsulate new modes of thinking, collaboration and communication.” In other words, since mycelium has the “ability to send and receive communication between fungi, trees and other plants,” this makes it a “decentralized form of thinking without the use of a central brain.” And as such, fungi are thought to be the inspiration behind the digital currency bitcoin, the decentralized design of which “resembles mycelium in code.”

Gavin describes how the fungal metaphor and the fungus-technology nexus have manifested in the contemporary world, in the works of genderfluid filmmakers, experimental projects found online, and music. For Gavin, the metaphor has become pervasive: In (more or less dystopian) science fiction literature, film, and television, the “biological futurism of contemporary mycology has replaced its metallic predecessor,” while recent academia has begun to discuss “the many scientific, philosophical, material, physiological and design questions raised by fungi.” Contemporary artists have also started exploring “the philosophical possibility of fungi or mycelium as a material for everything from bricks to clothing,” as well as in images.

As Gavin notes, since the “average human body is covered, inside and out, with more than 100 species of fungi,” the human “digestive system, and thus our emotional and physiological well-being, could not function without this fungal microbiome.” Accordingly, fungi may “offer us a view of our past and the possibility of a more symbiotic future, in which human and non-human animals, plants and fungi co-exist in thriving ecosystems.” For Gavin, this is because genetic research conducted in 2001 revealed that “mushrooms [are] neither plant nor animal, but rather members of their own natural kingdom, one that shares ancestors with humans.”

On this basis, Gavin contrasts “techno-futurism” with “fungal-futurism,” the difference between “a straight, teleological line of increasing acceleration” versus “a more sprawling and complex vision—perhaps even an ecological alternative to capitalism.” To conclude, Gavin writes that fungal optimism should remain qualified: Despite “the utopian human desire for fungi to save us from ourselves, mushrooms are unpredictable and self-serving […]. They did very well before humans appeared on the planet, and will thrive long after we’re gone.”

Whether presented optimistically, ominously, or neutrally; whether oriented towards the past, present, or future; or whether dedicated to everyday life, language, mythology, or mycofuturism, the discipline of ethnomycology concerns the study of what fungi mean to humans, and has at the very least discovered that the meaning of fungi changes according to different contexts of space and time. In short, it is the ethnomycological approach to the study of fungi—in contrast to works oriented towards mycological bioengineering—which is dedicated to the description of the many different meanings that fungi have held, hold, or will hold for past, present, and future human beings. In the end, anybody interested in the study of fungi has the opportunity to follow the ethnomycological direction wherever it may lead them, perhaps to solve the many problems already raised by ethnomycology, or maybe to pose new questions themselves.

See also the documentaries Know Your Mushrooms (2008), directed and produced by Ron Mann, filmed at the twenty-seventh annual Telluride Mushroom Festival in Colorado, and Fantastic Fungi: The Magic Beneath Us (2019) by Louie Schwartzberg.