ISSUE
12
-
Erasure and extraction: The unofficial history of Fast Food in Africa 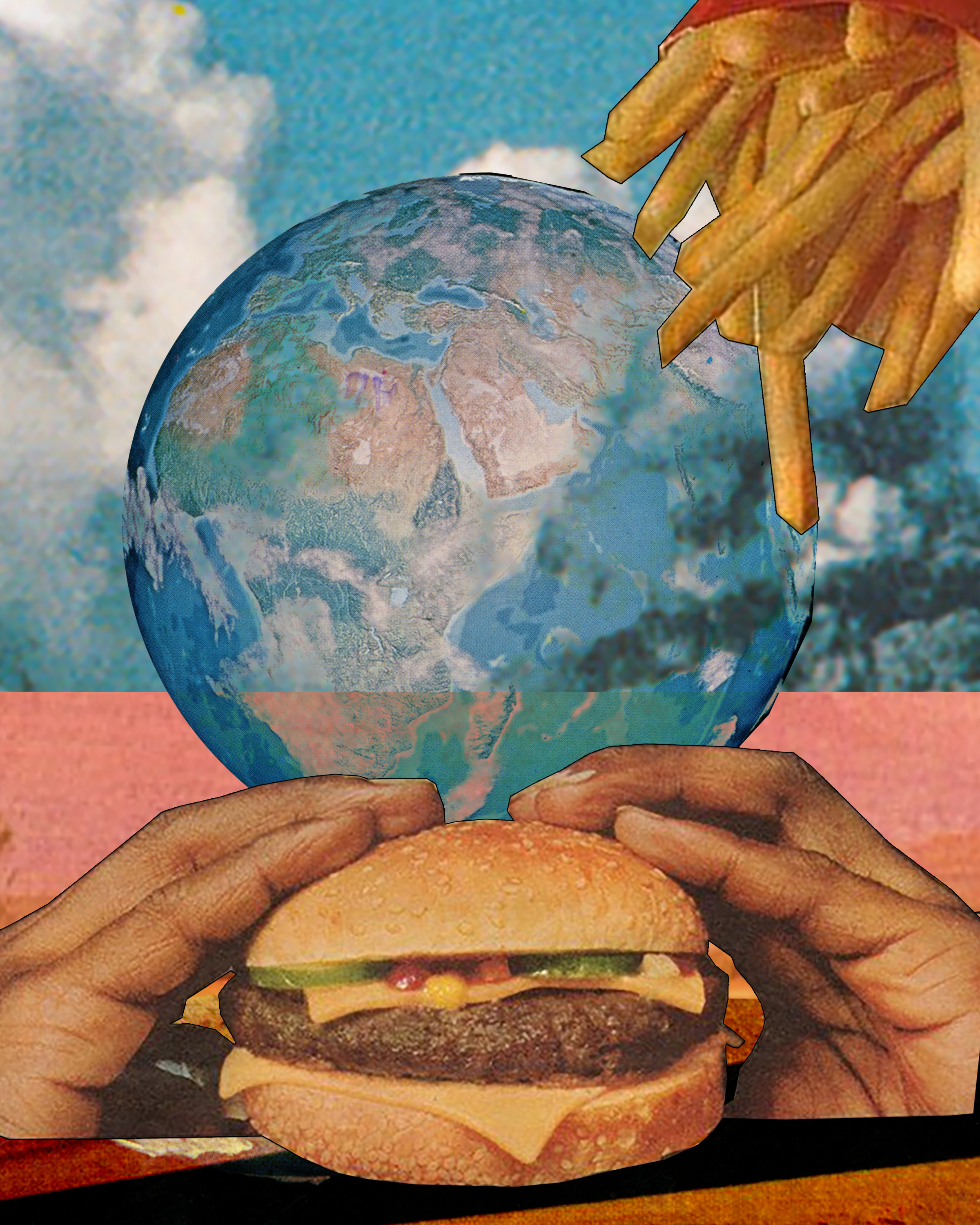 Fast Food Franchises are crippling the African continent on a monumental scale. According to the World Health Organization, fast food has been attributed as the leading cause of the global obesity epidemic — “globesity”. As Think Global Health describes, the number of overweight children in Africa nearly doubled from 5.4 million to 10.3 million between 1991 and 2016. In Ghana, the obesity rate grew by 650% between 1980 and 2017 to more than 13% of the adult population. Kenya’s obesity rate has increased by more than 100% since 1990.

All of this happened in line with the rapid growth of fast food franchises on the continent. But despite the obvious health concerns associated with fast food, which are increasingly well documented in Africa, fast food has more detrimental effects than meet the eye. The multinational corporations behind these multibillion-dollar businesses are undermining, overpricing, and exploiting Africa’s resources, producers and labour at the expense of African culture. In turn, these fast food companies are leading cultural homogenization in countries across the continent.

Developing countries across the globe have experienced cultural homogenization to varying degrees since the dawn of the Cold War, and African countries have not escaped it — particularly those which have traditionally been in the United States’ sphere of influence, or have transitioned to market-based economies. This process of cultural homogenization sees local cultures transformed or absorbed by a “dominant outside culture”. National identity and cultural diversity are dominated, erased, and destroyed. What greater symbol of the US’s dominant outside culture is there than fast food?

The US may be the masters of this but similar processes had long been underway before it emerged as a global power. Western powers have had deeply vested interests in Africa’s affairs, politics, resources since the 1884–1885 Berlin Conference, which — after centuries of colonial exploitation — more formally carved up Africa based on western powers’ interests.

This process of cultural homogenization sees local cultures transformed or absorbed by a “dominant outside culture”.

The fast food boom began when milkshake machine salesperson Ray Kroc bought out the McDonald brothers for $2.7m in 1955. The year before, he had become McDonald’s first franchise agent, and soon he was taking it to the world. McDonald’s opened and grew as US culture was ascendant globally and US capitalism was voraciously looking for new markets for its corporations. For many, it is not just fast food that represents global Americanized culture, but McDonald’s. This is why cultural homogenization is often referred to as McDonaldization, or even Coca-Colonization, as well as Americanization.

Twenty-three African countries are plagued by global fast-food franchises including KFC, Burger King, McDonald's, and Pizza Hut. The business model of all these multinational corporations is identical. They generate income by leveraging fast food to their franchisees who have leased property owned by the fast-food chain. The 2021 10-K reported that 93% of McDonald’s were franchised by the end of 2021.

Consequently, the biggest benefit to fast food chains is the lucrative revenue stream generated by franchisees who pay rent and royalty income to their bosses. For instance, McDonald’s retains 82% of its profits from franchises. Unfortunately, profits are funneled from the developing countries back to the Western world. The West continues becoming wealthy while Africa remains poor.

While these fast food franchises funnel wealth created in Africa out of the continent, they also impose western standards and requirements upon Africa’s franchisees. This means that few people other than those who are wealthy — and likely already reaping the economic benefits of cultural homogenization — or those who are willing to put all of their money into franchising a chain can become franchisees.

The bar is set unattainably high, with unrealistic standards to adhere to and costs to meet. To be a franchisee of an international fast-food chain in South Africa, you must have between $100,000 — $357,000 in your possession. The larger the international brands, the higher the premium price.

How realistic is it that you might become a franchise agent, when the average South African makes roughly $1429 a month?

Currently, the cost of being a franchisee for KFC is $357,000. For McDonald’s, it is between $238,000 and $357,000. The prices for both fast food chains are dependent on size, location, and demand for the outlet. McDonald’s expects franchisees to have 35% of the money as upfront and unborrowed money. They also don’t allow for any partnerships or absentee investors.

Lofty fees, rules, and regulations are the norm in the Western world, but fast food companies make little effort to adjust their standards for the country or culture in which they are working. How realistic is it that you might become a franchise agent, when the average South African makes roughly $1429 a month? Members of the middle class across Africa would struggle to ever get close to the 35% of costs required upfront and of their own money. Fast food franchises can keep these costs and their prices high by making the fast-food landscape exceedingly competitive, expensive, and lucrative, because the brands are already globally established.

But this isn’t the only way that fast food franchises impose their standards at the expense of local cultures. In their attempt to exercise control over Africa’s fast-food industry, fast food franchises have ruffled feathers with local producers. In January 2022, scandal erupted in Kenya when KFC started running out of fries. KFC couldn’t sell french fries because the fast-food chain was unable to import pre-sliced potatoes from Egypt. The multinational corporation does not source potatoes from local farmers despite their abundance and affordability in Kenya. Patriotic Kenyans took to Twitter, calling for a boycott of the fried chicken chain.

Francis Kimemia, the Governor of Nyandarua — a thriving potato-growing county — accused KFC of being “insensitive to farmers.”

Potatoes are the second highest consumed crop in Kenya after maize. According to an interview by the Standard Newspaper with the company’s chief executive, Jacques Theunissen, Kenyan farmers had not undergone KFC’s quality assurance process to ensure “our food is safe for consumption by our customers.” Theunissen assured local media that ingredients for their buns, ice cream, and flour are sourced locally. Francis Kimemia, the Governor of Nyandarua — a thriving potato-growing county — accused KFC of being “insensitive to farmers.” Due to the online outcry, KFC has promised Kenyans that it will  source a suitable Kenyan supplier. One of their biggest fast-food rivals, Burger King, quickly capitalized on the company's backlash by posting on Twitter that they “had enough fries”.

Food tech giants are now moving into the fast food space, too, and in doing so they are continuing the predatory practices of fast food corporations. Uber Eats infiltrated Africa after capitalizing on the Covid-19 pandemic, when profits for digital conglomerates skyrocketed. Among many of the tech company’s now well-documented problematic practices is the way it pays its workers — or rather, underpays its workers. In South Africa, Uber Eats has been accused of exploiting its workers. Drivers protested against the multinational conglomerate in December 2021 and January 2022. They claimed that their fees had been excessively reduced and were exponentially affecting their salaries. The strike came after delivery fees were lowered by 30% plus 5% to the driver to a capped fee of R9 (50 cents) per meal.

Africa’s fast-food landscape is continuously growing and evolving to accommodate international conglomerates because of their enormous financial capacity. These multinational corporations bring urbanization and expanded job opportunities. But it is not all milk and honey. They contribute to cultural erasure and impose foreign standards while exploiting African workers and resources and funneling wealth out of the continent.

This contemporary form of neocolonialism and cultural imperialism is regarded with scorn and contempt by indigenous people. It stifles and silences African cultures. As long as fast food companies see opportunities in Africa, they will continue expanding at the expense of Africa.