ISSUE
6
-
Sport
Does running have an energy gel problem? 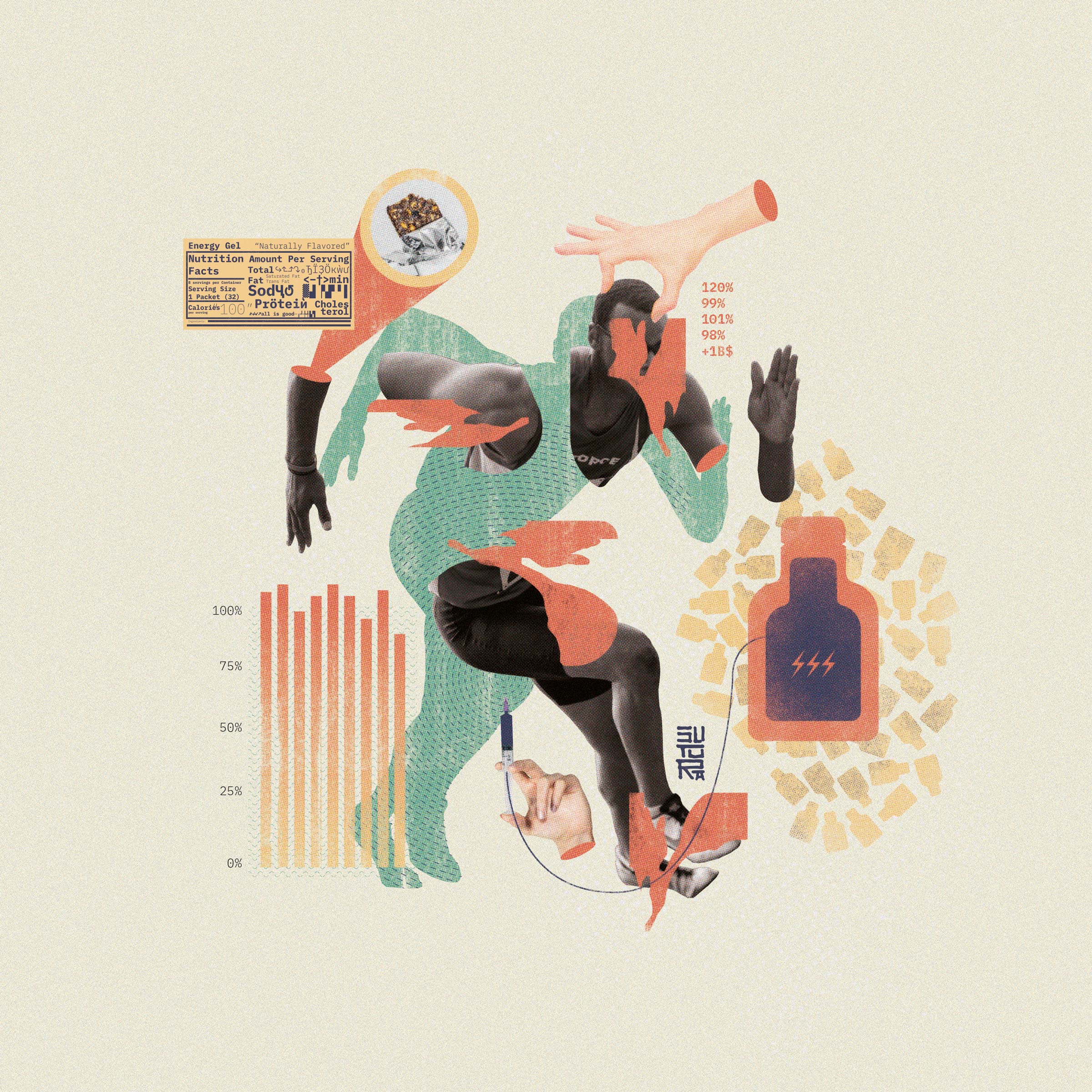 Digital Collage Artist:
Elias Garcia
Long-distance runners rely on gels as their carbohydrate stores drop towards the end of races — but they are wrecking athletes’ teeth and littering the environment
by
Kenaia Neumann
2/17/2022

If you’re a serious runner — particularly one of the long-distance persuasion — you’ve likely consumed an energy gel. These gels come in a small fuel packet, a functional tool to help you realize a goal. Distance running is a realm in which time is the only objective measure of success and every action is taken in pursuit of shaving another second off the clock. Runners consume energy gels of all varieties as they pursue incremental increases in speed. They’re designed specifically for going the distance.

When running a long-distance race, such as a marathon or half marathon, the body reaches for carbohydrates, its preferred source of energy. This is great! But within two hours, your body starts to run out of them. This means that in most distance events you’ll run out of stored carbohydrates long before the end of the race. You may have heard runners use the phrase “hitting the wall” to describe the awful feeling of their body simply… running out of energy, becoming both physically and mentally fatigued. Although there are a myriad of other reasons a marathon might not go well, one of the easiest to fix is that dreaded loss of energy. And that’s where gels come in.

By the 1980s, scientists had a solid understanding of the benefits of carbohydrate consumption while running for marathoners. However, there wasn’t yet a convenient way for runners to get these carbohydrates into their bodies. With the help of renowned sports scientist Timothy Noakes, German company Squeezy became the first to create a highly processed and specific solution in a package that could be torn open and swallowed in a few strides. This enabled runners to effectively reload their carbohydrate stores, increasing their energy levels. These days, gels consist of an easy-to-digest blend of fructose and maltodextrin, a highly processed carbohydrate which is often combined with other performance-enhancing ingredients such as sodium or caffeine.

Researchers at popular gel company Gu explain that gels are made from fructose and maltodextrin because the two are digested differently, allowing you to consume one product while absorbing the maximum amount of fuel. RD Meghann Featherstun, like many sports dietitians, recommends runners consume 30g-60g of carbs per hour during their event. One Gu gel typically contains 25g of carbs, and the company recommends consuming one gel with water every 45 minutes. This is because the impact of such concentrated sugar hitting an empty stomach can cause digestive issues.

Today, gels are considered essential for performance in distance running, alongside certain electrolyte beverages and other carbohydrate boosters, like gummies or “chews”. Flavour is secondary, although in today’s market you can find favourites like espresso and banana alongside experimental titles like “hoppy trails” or tomato. Gel tends to be the favoured fuel form because it requires no chewing. Not having to chew means there’s no need to slow down and swallow. For speed-focused runners, who will spend hours training their arms to swing in the most efficient way to minimize wasted motion, this is an incredible tool. It would not be wrong to suggest that these gels have aided runners in winning Olympic medals and setting world records.

But they’re not perfect. As with any food (or in this case, food-like substance), eating too many of these products can cause problems. The World Health Organization recommends that less than 10% of our daily food consumption should come from added sugars, in a report linking an excess of added sugar consumption to the likelihood of obesity and related diseases like Type 2 diabetes and heart disease. Runners and elite athletes do need to consume more sugar than the average person, but they are certainly not immune to consuming too much.

A study published in British Dental Journal in August 2019 found that athletes had “substantial amounts of oral disease”, despite reporting positive oral-health habits and behaviour. Of those who participated in the study, 70% consumed energy gels and 87% consumed energy drinks, while 94% reported cleaning their teeth at least twice a day, too. Not only do gels and drinks often have incredibly high levels of added sugar, but acid, too — which is at least as bad as sugar, if not worse. For runners, this is exacerbated further by ‘dry mouth’.

Runners’ ‘dry mouth’ occurs when your body is dehydrated from sweating and less saliva is produced in your mouth. Saliva helps to maintain soft and hard tissues, breaks down food and fights oral diseases to prevent cavities from forming. So when long-distance runners take on an energy gel, they’re often entering a perfect storm for oral disease: they’re consuming sugar and acid at a time when their defences are down. In fact, in a 2012 study by the Academy of General Dentistry, researchers found a link between gel consumption and permanent erosion of tooth enamel, suggesting athletes using these products are at a higher risk for cavities.

It’s clear consuming too much of these gels, without at least rinsing the residue off your teeth with water, can cause serious dental issues if not addressed properly. But packaged energy gels are so disposable and easy to consume that overconsumption is somewhat inevitable. Although long-distance runners require extra fuel during long runs and competitions, recreational runners and those running shorter distances can overuse gels, adding to their daily sugar intake while not utilizing the fuel in the intended way. The marketing of these products in the running industry often leads consumers jogging 5ks to suck a few down thinking they’re helping their performance. Gels for these runners are unnecessary for performance and unnecessarily detrimental to their dental health.

That runners’ energy gels are so disposable has consequences for the environment, too. If you watch until the end of a marathon, when the road crews clear away the cones and water tables, you’ll notice the road is littered with shiny, empty wrappers, scattered along the side of the road or heaped adjacent to trash cans like piles of alien leaves. If you’re running in the middle of the pack, you’ll notice them during the race, too. There are no compostable wrappers here, not even from carbon neutral Muir, arguably the most eco-conscious of gel brands today. Gels are packaged the way they are because it makes them portable and easy to consume. However convenient this may be for running, it is horrible for the environment. Millions of these little gel packets end up in landfills, where they will retain their shape for much longer than any natural substance.

In running, athletes are always trying to optimize performance, so suggesting less use of such an essential tool to mitigate its side effects is unlikely to work. In a sport so focused on the pursuit of progress, you can’t undo innovation. Fortunately, an awareness of the environmental effects of mass gel consumption is growing. Larger races like the New York and Los Angeles Marathons have developed whole programs to deal with the issue of the trash left behind by these nutrition products. The New York Road Runners Association encourages “plogging,” or going on a run while picking up trash. The most popular running gel company today, Gu, has been working with TerraCycle to repurpose some of the gel packets left behind after major races, turning much of their waste into products like bike racks or pieces for children’s playgrounds. Gel company Muir is also trying to clean up its footprint. They are a certified Climate Neutral company, meaning that they’ve found ways to reduce or offset their carbon footprint. They’re also one of the few brands using more natural sugars in their product, trying to find a fuel that works for performance but isn’t as rough on the body as highly processed sugars. Instead of fructose and maltodextrin, Muir uses organic coconut palm sugar and blackstrap molasses. Although the flavour takes some adjusting to, the product is to a large extent as effective as its more popular competitors.

These are good starting points because running gels are here for the long haul — just like many of the runners using gels.  Giving your body enough fuel to finish an endurance event doesn’t just improve performance but aids recovery, too, because runners aren’t so drained towards the end or afterwards, reducing the risk of fatigue and injuries, and likely prolonging runners’ peaks. But however worthwhile energy gels maybe, running needs to address the dispensability of these gels — for the sake of our planet, for runners’ teeth, and for the long-term health of all runners.