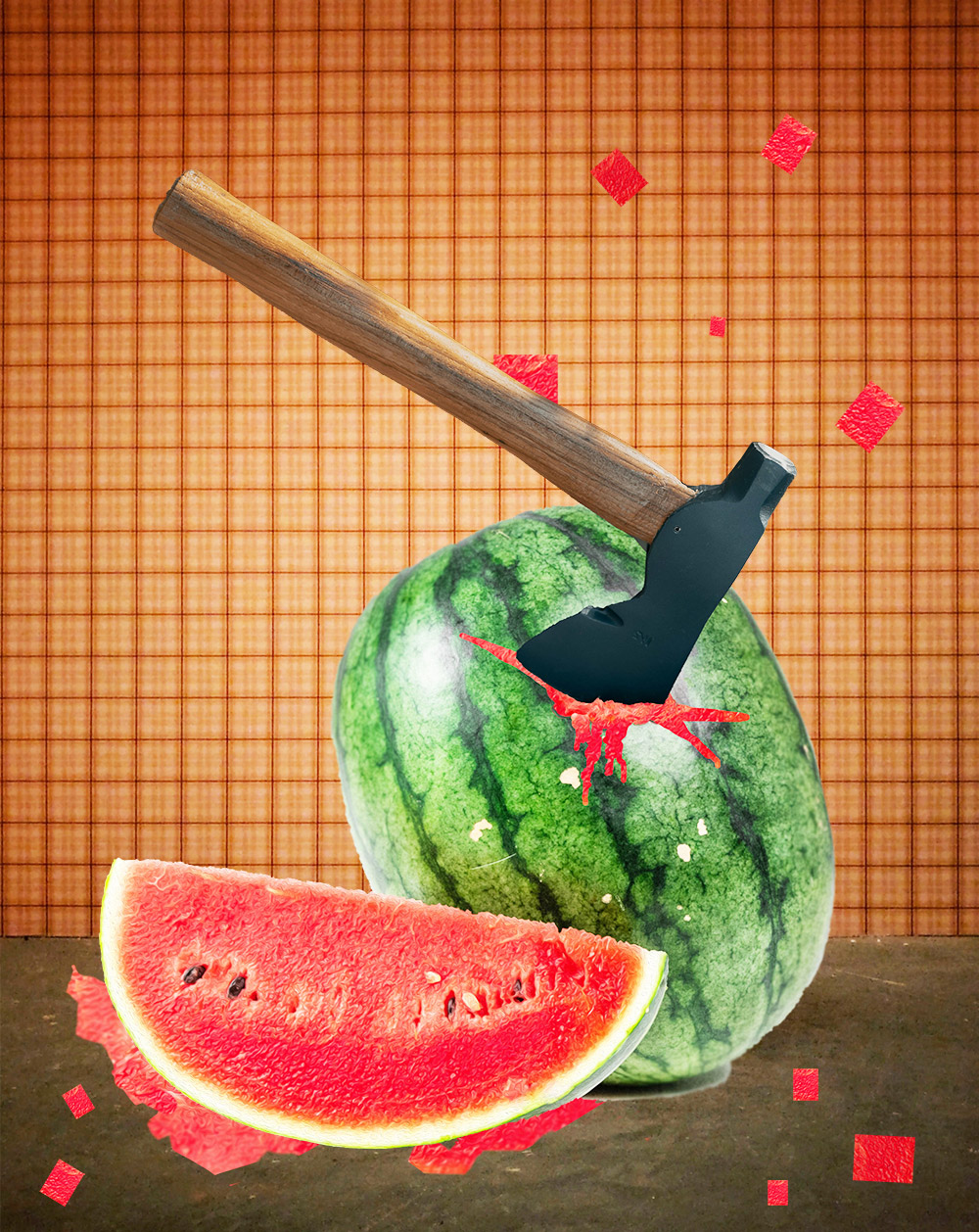 If you lived in the American South in the 19th century and you wanted to make a quick buck, robbing a watermelon patch would seem like a winner. Watermelons were a profitable crop, delicious to eat, and appeared to be easy pickings.

Yet watermelons were actually one of the most dangerous crops to try to steal. Cattle rustling aside, stealing them was the most deadly agriculturally-adjacent crime.

Few people know the watermelon’s violent history. Its seeds have been smuggled from prison ships, a slice sparked off days of street violence, and all around the world watermelons have a knack of ending up at crime scenes.

The childhood fear of swallowing a seed and a watermelon plant growing in your stomach is really the least of our watermelon worries.

We’ve been eating watermelon for millennia. The berry—yep, watermelons are technically berries—has always been prized for its refreshing taste and for being a handy reservoir of water. Like all domesticated crops, the watermelon has been crossbred to produce the tastiest varieties. These unique breeds need guarding, since watermelons are incredibly promiscuous; if a watermelon plant is within a mile of another melon, gourd, pumpkin, or squash, it will crossbreed into a franken-melon.

The Bradford watermelon is one of the most legendary breeds. Its roots reach all the way back to the Revolutionary War, when an American soldier named John Franklin Lawson was captured by the British and sent to a prison in the West Indies. The prison ship’s captain gave Lawson a slice of watermelon—perhaps out of pity, or because it was the easiest way to give a prisoner water aboard a heaving ship. Lawson was supposedly so smitten that he kept every seed, smuggled them out, and planted them when he returned home to Georgia.

Lawson shared his prized melon seeds with only two other farmers, including Nathaniel Bradford. Bradford crossbred Lawson's variety with the Mountain Sweet to create his own, which produces large, oblong watermelons that are famously soft and sweet. Bradfords became the single most important late-season market melons in the South from the 1860s to the 1910s. And the 1867 watermelon crop alone is said to have kick-started what is known as truck farming—growing crops exclusively for a distant market.

Criminals took notice of this profitable melon, too, so farmers stepped up their security. Watermelon patches patrolled by guards with shotguns wouldn't have been an uncommon sight. But organized gangs could still overpower the guards, so farmers turned to more creative methods. Some farmers electrified their watermelons, while other growers set up a game of poison roulette by poisoning a few among their crops. They didn’t mark which were fatal to eat, so would-be watermelon rustlers stole at their own risk.

Tragically, farmers sometimes forgot which watermelons were safe and which were poisoned. Lucky Peach and Tree Hugger uncovered newspaper coverage of these accidental poisonings:

They are just a few of the unlucky folks who found out too late that their cool summer treat would be their last meal.

Further south in Panama City, a slice of watermelon led to violent street fighting that killed more than a dozen people and wounded scores more. On a hot day in April 1856, a train-load of Americans bound for California and the Gold Rush were waiting in Panama City for high tide, so they could steam up the west coast to San Francisco. A group of these passengers, including a man named Jack Oliver, stole a slice of watermelon from a fruit vendor, José Manuel Luna, and refused to pay. As Mercedes Chen Daley recounted in the Hispanic American Historical Review:

“Oliver picked up a slice and after taking a couple of bites threw it on the ground in disgust and walked away. Luna demanded payment, and Oliver replied, ‘Don’t bother me; kiss my ass,’ to which Luna rejoined, ‘Take care that here we are not in the United States. Pay me my real and it will be all right.’ Oliver said ‘he would pay with a pistol shot,’ and reached for his gun. Luna then defied him: ‘If you have your pistol, I have my knife.’”

The confrontation escalated. A bystander darted from the growing crowd, grabbed Oliver's gun, and disappeared into the surrounding neighbourhood. Armed Americans gave chase and the Panamanians, who had long been sick of the intrusion of Americans and their railroad, fought back. They targeted American businesses and finally the railroad station where most of the Americans had taken refuge. Panama City police arrived at the besieged railway building and briefly deescalated the situation, until Panama’s provincial governor ordered the police to assault the station. The close-quarters fighting lasted until dawn the next day, leaving 15 Americans and two Panamanians dead, and more than 70 injured.

A subsequent American investigation into what became known as The Watermelon War or The Watermelon Riot blamed the locals and insisted they pay for damages. The U.S. also used the incident to move in troops and warships, beginning the first of many American Panamanian interventions, but the only one started by a slice of watermelon.

Watermelons continue to attract trouble. In 2011, entire fields of watermelons exploded when farmers in China sprayed them with a growth accelerator called forchlorfenuron. The chemical ripens crops faster and increases their size and price, but here that happened a bit too fast. More than 160 watermelons were transformed into watery landmines.

In 2019 an unlucky Florida couple tossed some watermelon to what they thought was a lemur skulking around their yard. When Michael Litersky left for work the next morning, the animal was waiting—and it was actually a carnivorous kinkajou, native to the South American rainforest. Litersky's girlfriend Gillian Hicks told CNN that the kinkajou “was so hungry for more watermelon, it was waiting, and as soon as [Litersky] opened the door, it just bum-rushed him.” Litersky was clawed and bitten by the kinkajou until he managed to smack it into their bathroom with a frying pan, and trap it there until police arrived. “We heard the toilet lid, like, open and shut a few times...it was nuts,” Hicks said.

A New York woman sued after she was caught between two fruit-stand employees chucking watermelons at each other, and was hit in the head with one. Two robbers in Virginia wore watermelons on their heads when they robbed a convenience store, giving new meaning to the phrase "caught red-handed.” A massive brawl in Khabarovsk, Russia started when a customer took offense to being sold unripe watermelons. The town of Chinchilla in Australia hosts a yearly melon festival, featuring “all manner of other quasi-sports with ‘multiple hazardous outcomes’ where 'injuries are likely.’ ”

And another man in—where else?—Florida attacked a woman who threw his watermelon in the ocean. The melon was carved into a head shape and began attracting bugs, so the woman disposed of it. According to the police report, the watermelon sculptor took such offense that he "approached the woman with his swim noodle full of water and dumped the water on her as she was sitting on her towel… He then punched her in the cheek."

With its long history as a delicious fruit with a penchant for danger, it’s no wonder that Gallagher made a career out of smashing watermelons.