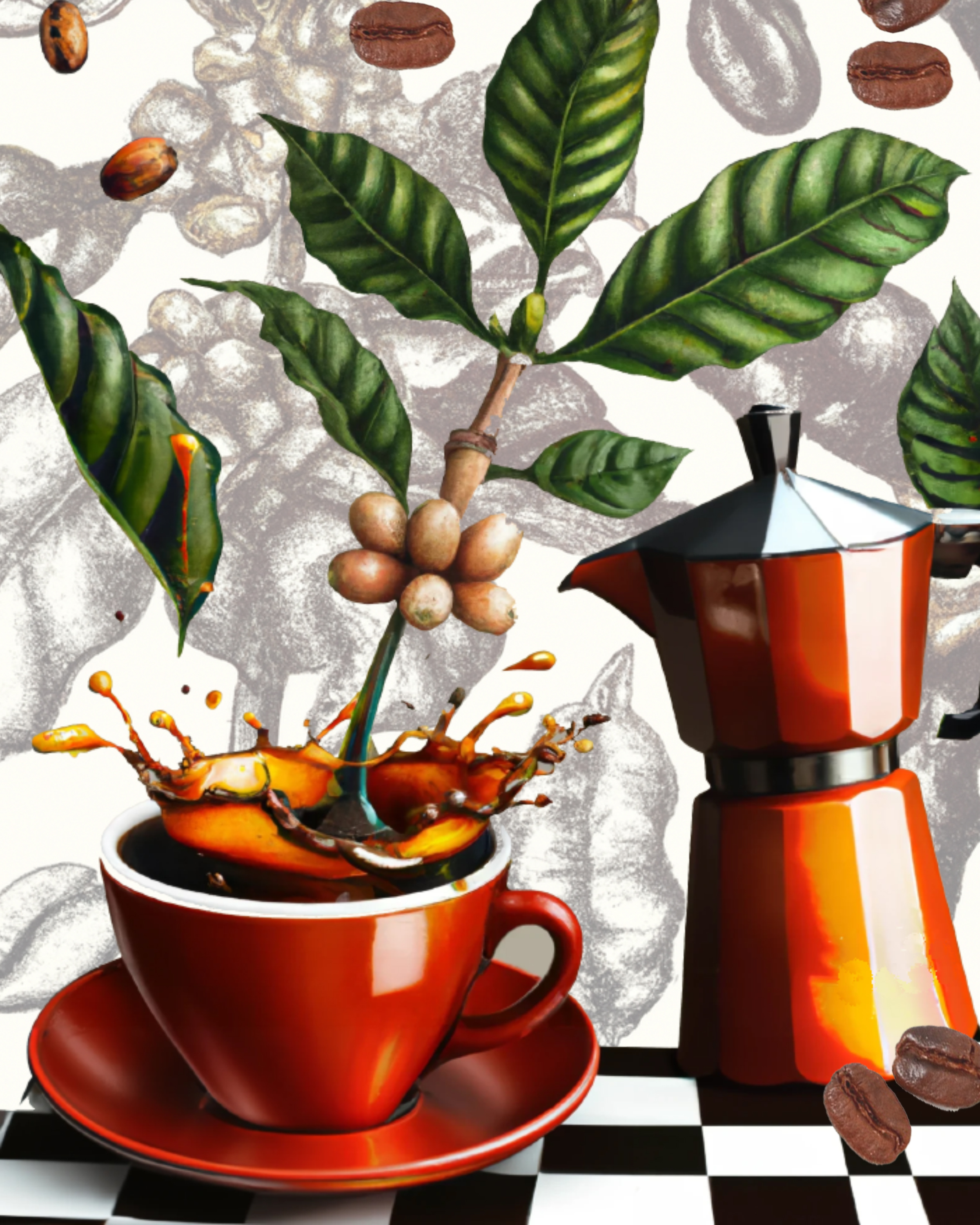 Digital Collage Artist:
ia Llamozas
Consecutive years of growth in cold and ready-to-drink varieties and new flavours has made coffee more accessible than ever. This coffee romantic has come around to realizing the benefits of this evolution
by
Mauricio Interiano
1/6/2023

I was about to go into a meeting at work when a colleague arrived with a full Starbucks coffee cup in hand. I say ‘coffee’, it was a crème brûlée latte. I was baffled.

“That’s not coffee!” I told my colleague, who knew she’d been caught in her coffee crime: “Don’t judge me, I know I am basic,” she confessed. “Do you have to tap the top?” laughed the good cop in the office.

Perhaps my disbelief was unwarranted. Because we’ve all seen the cups of improbably sugary, creamy coffee with names scrawled down the side, thrust out of drive-thru windows into the hands of a bandit who’s running from one place to the next; engine revving, ready for a quick getaway.

North America has long consumed much of its coffee on the go. Coffee is tied to work culture by the proliferation of Starbucks and TV shows from the 90s onwards, which depict anyone in a workplace or procedural drama with a coffee cup in hand. But those cups aren’t frothing with cream and sugar like they do now. Nor are they part of a cafecito revolution.

“We've definitely seen a lot of growth in the market for flavourings,” says Ross Hindle, chief operating officer for Perfect Daily Grind, a coffee publication that reports on the coffee supply chain. “Milk-based beverages themselves have continued to remain consistently popular, but what's really grown is the innovation within that sector. A lot of the changes here can be linked to ready to drink (RTD) and cold coffee options — which has seen a particular boom in the last 3 to 4 years.”

"The explosive growth of these factors ... are all driven by millennials and Gen Z, now arguably the most important consumer demographics within specialty coffee.” — Ross Hindle, Perfect Daily Grind

The worldwide RTD coffee market was worth US$19.05 billion as of 2017 and is expected to hit US$36.60bn by the end of 2025. Katie Belflower, associate editor at food industry consultants Technomic, told Food Service and Hospitality that, “iced coffee drinks are especially showing growth.” Beflower says Canada has seen a 61.5% growth in iced Americanos, 37.2% in iced coffee, 29.3% in iced lattes and iced cappucions are up 27.6% in the year until September 2022. According to Tim Hortons’ chief marketing officer Hope Bagozzi, who is also quoted in the same article, the cold beverage market, which they say is worth $4.5bn in Canada, will be a key part of targeting a younger audience.

It is that younger audience which is driving demand for an increasing diversity of coffees.

“The explosive growth of these factors — flavourings, cold coffee, RTD, and the use of plant milks in RTD cold drinks — are all driven by millennials and Gen Z, now arguably the most important consumer demographics within specialty coffee,” Hindle says.

Specialty coffee is driving growth, with the US National Coffee Association reporting that specialty coffee amounted to 62% of the coffee consumed in January 2022. While millennials and Generation Z may drive this change in what they can drink, it also appears that providers are becoming more responsive to consumers’ habits and desires. Comax surveyed 1,200 US coffee drinkers and found that 48% of respondents’ coffee-drinking habits changed with the seasons, with more than half of respondents saying they drink seasonal flavours during fall and winter. This relationship inspires innovation and encourages brands to get creative with their flavourings.

But this rapid and observable change in coffee types and coffee-drinking habits is not solely down to consumer demand and more responsive brands. “I think takeaway, delivery, and drive-thru all saw a huge boost in popularity throughout the Covid-19 pandemic as for many people it was the only way to drink a coffee that they hadn't made themselves,” Hindle explains.

Tim Hortons and Starbucks have recognized this massive growth area and continue to create more drive-thru lanes in stores even as pandemic restrictions fade into the past. Tim Hortons’ chief operating officer Matt Moore and Starbucks CEO Howard Schultz have both said the drive thru will be critical to future sales and their companies will prioritize improving the drive-thru experience, with digital menu boards and further express options.

[Coffeehouses] were the first legitimate places for men to socialize without the dubious reputations of taverns. Coffeehouses also fostered egalitarianism ... [placing] patrons on an even footing.

As someone raised in a culture where we enjoy coffee slowly and leisurely, I can find these rapid changes a little difficult to stomach, quite literally in one sense. As fast coffee habits take root, it is not only in the drive-thru lanes of big brands that we see coffee transform, but also in the nature of the drinks. Many of the beverages thrust out of drive-thru windows rely on the formula that makes fast food so attractive. They combine sugar and fat, a combination that is hard to find in nature and which, as Emily Monaco described at the beginning of this issue for Sliced, causes people to have much less control over their consumption choices.

These changes can feel so wrong to us coffee romantics because they challenge much of what we believe about coffee and our idea of its culture. We believe in the cup of black coffee and its close circle of cousins, so each new improbably flavoured latte is like one more parishioner leaving the church. We feel the weight of coffee’s history, lore and myths.

Coffee’s origin story is in fact likely a myth. Coffee originated in southwestern Ethiopia, but the next bit is less certain. Legend has it that Kaldi, an Ethiopi­an goatherd, noticed his goats were acting energetically after they’d eaten a fruit from a tree. Kaldi took some of the berries for himself and coffee’s future opened up.

The Arabian Peninsula became the first hub for coffee trade and production around the 15th century and it is here that the modern coffeehouse emerged. As Jonathan Morris writes in his book Coffee: A Global History, they were the first legitimate places for men to socialize without the dubious reputations of taverns. Coffeehouses also fostered egalitarianism. Until then, to host guests and meet friends you had to lay on banquets in your home — likely relying on an array of servants — which distinguished host and guest. Coffeehouses placed patrons on an even footing.

The coffeehouse spread throughout East Africa and the Middle East and proliferated across Europe in the 17th century. They were places where people gathered not only to drink coffee and socialize, but to watch music, play games and debate the ideas of the day. Coffeehouses were soon called “schools of the wise”, an association with intellectualism that lasts until today, perhaps most famously exemplified by the French existentialist philosophers of the early 20th century.

It was — you may or may not be surprised to learn — Europeans who brought coffee to the American continent and established coffee-growing economies in the Caribbean, South America, and Central America — where my own coffee consciousness formed on my Grandpa’s coffee farm and in the cafes of Copan, sitting down to drink coffee with time on my side and a freshly baked pan dulce.

There are around 100,000 families involved in coffee production across Honduras, which perhaps explains why our relationship with coffee feels so intimate and why rushing from one place to another, coffee in hand, feels so alien. It is only recently, in fact, that Starbucks has been able to open up stores in the country, albeit with strict rules.

"[We] need to acknowledge the fact that new flavours often make coffee more accessible to people who otherwise wouldn't try it.”

Fast coffee may not break rules but for believers raised on coffee’s myths and history its advent challenges our accepted norms. We feel coffee is sacred. We wish we could preserve its rituals, as Ethiopians continue to do through their complex and elaborate jebena buna ceremony.

For Hindle, the idea that fast coffee trends in some way remove coffee from its natural roots is a bit reductive. True to the egalitarian spirit of the first coffeehouses, Hindle says that we “need to acknowledge the fact that new flavours often make coffee more accessible to people who otherwise wouldn't try it.” While a definition for fourth wave coffee remains elusive, it is this increasing scale and accessibility of high-quality coffee that’s shaping the latest wave.

“Personally, I think anything that introduces new audiences to coffee is good, but you should also exercise caution. A lot of the sweet, creamy, flavoured drinks out there are extraordinarily high in sugar and calories — drinking a frappuccino every day is unlikely to be a balanced dietary decision.

“At the end of the day, it certainly illustrates how versatile coffee can be — and shows that we've come a long way from people not wanting to drink coffee because it's too ‘bitter’ or ‘strong’.”

We cafephiles may like to believe that these new drinks are a crime against coffee, as I often do. But if they are crimes, they are crimes of sin; breaches that only apply to believers at whose altar sits a small cup of black coffee. In reality, it is long past time we shed our old and soon-to-be outdated ideas of what coffee should be and learn some lessons from the history of coffee we venerate.

Coffee belongs to the people. So, bring on the next spiced-coffee, the evolution in RTD, and even the crème brûlée latte. Although you won’t find me drinking it — yet.