ISSUE
6
-
Sport
How the climate crisis threatens your favourite sports: A groundskeeper’s view 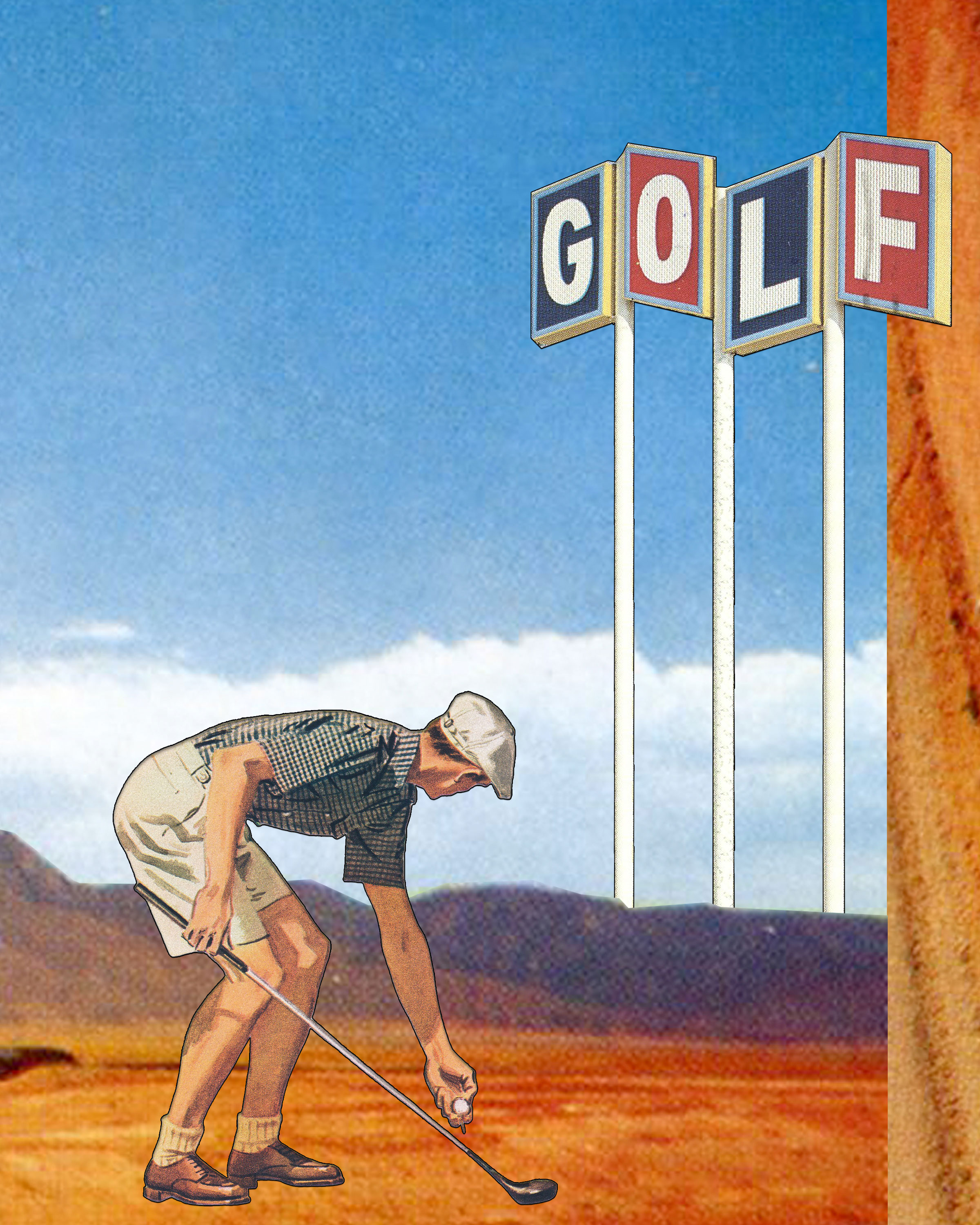 Sport will not escape the challenges of the climate crisis; to adapt its methods to the effects of a radically changing climate, and reduce its impact on the environment.

In recent years, numerous reports have singled out cricket and golf as sports that will be severely affected by the climate crisis. At the elite level, both sports require huge amounts of international travel, but the effects of the climate emergency are already being felt much closer to home.

What cricket and golf share is the importance of climate and groundskeeping. Gameplay is inextricably linked to the conditions, and weather can often prevent play from continuing. In cricket, for instance, the nature of the game is often decided by the condition of the pitch — the 20-metre cut strip of grass in the middle of the ground on which the players bat and bowl — which is ultimately decided by a combination of weather conditions and preparation. In golf, softer, well-watered greens will make the greens slower, which affects the way golfers play.

For these sports, radically changing weather patterns aren’t just logistical challenges but existential issues. Groundskeepers are at the forefront of this struggle.

“I noticed serious weather changes in the past four or five years, but we only started putting it down to climate change in the last two or three years,” says Robin Saxton, head groundsman at Glamorgan County Cricket Club in Wales.

“It’s the extremes of weather. We’re seeing long drier periods and much more intense weather. You could see a month’s worth of rain in a weekend.

“It rains for longer and harder, so we’re losing entire days of cricket now rather than just sessions.”

Kevin Kobzan, golf course superintendent at Peterborough Golf & Country Club in Ontario, Canada, recalls long droughts and more humid conditions all the way back to 2005, and he also says that rainfall patterns have changed noticeably.

“The rainfall that you get is more like a storm passing through.”

The effect of heavy rains on cricket is being keenly felt in the UK. Worcester County Cricket Club, where Saxton used to work, now regularly floods several times after Christmas, which was previously unheard of. More than a quarter of England’s home one-day international matches have been affected by rain since 2000, resulting in shortened or abandoned games.

The fact that more than 25% of England one-day international matches have been affected by rain is all the more startling when you consider that radical climatic changes will become more and more extreme. That figure of truncated games will only get worse.

At Glamorgan, Saxton says it seems like spring doesn’t come anymore. Winters are wetter and milder, he says, while hotter summers can last well into September and October. Ultimately, weather patterns are much less predictable.

“Trying to factor in weather patterns is much much harder, and long-range forecasting is much less predictable.”

“The wind is the biggest change,” Saxton says. In recent years, the UK has experienced many more storms with high-velocity winds, including three in 2022 already.

“Wind dries the ground out more quickly, and makes protecting the ground harder.”

Groundskeeping teams cover the outfield in long sheets to protect the grass when it is raining, but taking these off or putting them on during high winds can be dangerous for staff, Saxton says.

The health and safety of groundskeeping staff is rarely mentioned in the emerging discourse on the climate crisis in sport, but it is top of mind for Kobzan, too.

“We have to be wary of staffing. You don’t really want people working out on the golf course in 40 degree heat.”

Much of golf’s climate change challenge relates to water. Golf courses in the US alone consume 2 billion gallons of water on irrigation every day. Data from Sustainable Golf, as quoted here by the BBC, reveal that the average 18-hole golf course in dry climates uses an amount of water equivalent to that used by 4,000 UK households.

Rising sea levels also threaten clubs across the world that are built near coastlines. Clubs like the 450-year-old Montrose Golf Club in Scotland could be swallowed up by rising sea levels, and Montrose is fast losing ground due to coastal erosion. In the past 30 years, the club has had to move seaside holes as water levels have moved 70 metres towards the course, reported Golf.

Between 2015 and 2018 in Cape Town, South Africa, droughts forced authorities to cancel club and school cricket amid extreme rationing of water use. “It was incredibly scary on a personal level,” Evan Flint, head groundskeeper at Newlands Cricket Ground in Cape Town, told New Frame.

“Sometimes I’d water the pitch twice a day just because I could. It wasn’t until I was forced to change that I opened my eyes.”

In 2016, Indian Premier League games were moved from Maharashtra as the state endured its worst drought for a century. In Australia, cricket games have played out against a backdrop of wildfires and haze.

While playing against Australia in 2018, England captain Joe Root had to go to the hospital due to heatstroke — something which, despite the high temperatures cricket is used to playing in across Australia, southern Africa and south Asia in particular, is still very uncommon. As the grounds manager that day Justin Groves later told the BBC, the black soil of the ground reflected the heat “like a bitumen road”, so that the temperature was effectively nearly 60 degrees.

Cricket grounds and golf courses differ markedly in how they reflect the climate extremes. As the Root case shows, cricket stadiums — which are often big concrete bowls — can exacerbate extreme heat. But as Kobzan notes, golf courses are generally more temperate, naturally reducing the effects of extreme heat.

“Turf brings in carbon and releases oxygen. It’s generally colder on a golf course because of the amount of oxygen released by a plant. It’s also a good corridor for wildlife.”

For cricket and golf, however, pests, disease, and invasive species in turf are increasingly causing groundskeepers issues.

“There are a lot fewer frosts throughout the winter now, which would usually keep worms away,” Saxton says.

“We’re facing disease pressure from the milder winters. Frosts are great for killing diseases, and worm activity is through the roof.”

This, as well as greater numbers of chafer grubs and leather jackets, has seen increased pecking damage from crows and other birds pecking for insects. But protecting pitches with sheets seems increasingly less viable, as long stretches of time under sheets during warmer, milder weather creates the kind of humid conditions that allow fungal diseases to grow.

Golf has not been immune either. As Golf Sustainable reported, clubs across Europe have suffered pest infestations linked to climate change. Echoing Saxton, Paul Woodman told Golf Monthly that with climate change, “we don’t seem to get the winters that kill these bugs.”

Chemical fertilizers are also steadily being removed from the market owing to the harm they cause the environment. For groundskeepers such as Saxton and Kobzan, this means focusing on disease resilience — strengthening and protecting turf so that it can withstand disease and pests when they do come, and also to withstand droughts.

“It’s all about creating healthy soils and aerating. Creating avenues for water to get out, nutrients to get into the roots, air to get to the plant, preparing your soil for the rigours of a drought,” Kobzan says.

His Peterborough golf club is also set to start using more biostimulants and organic fertilizers, and will monitor how the turf handles disease pressures and droughts.

“We’re also trying to mitigate how much [grass] growth we get. We don’t want things to just keep growing.” Putting in large amounts of nitrogen — an element that enables grass to grow — risks losing it to leeching while causing grass to grow more than it needs.

Kobzan says that by thinking about reducing nitrogen in their grass, they could mow the grass less — further reducing the golf course’s impact on the environment.

Ultimately, both see that their sports are still very much at the beginning of this conversation. Kobzan says that the amount a golf course can do very much depends on the resources and expectations of that club. Saxton says that while the conversation is still in its early days in the professional game, people know they have to prepare their grounds — so groundskeepers will have to adapt to the climate crisis.

“It taught me that you only need to water the pitch twice a week,” Flint says of Cape Town’s drought.

“I’d encourage all groundsmen to be water wise. But I can’t get on a high horse and lecture people. It took me living through that experience before I woke up. Unless it’s right in front of you, you don’t think about it.”