ISSUE
8
-
Plastic
By transcending plastic-wrapped snacks, we can taste freedom 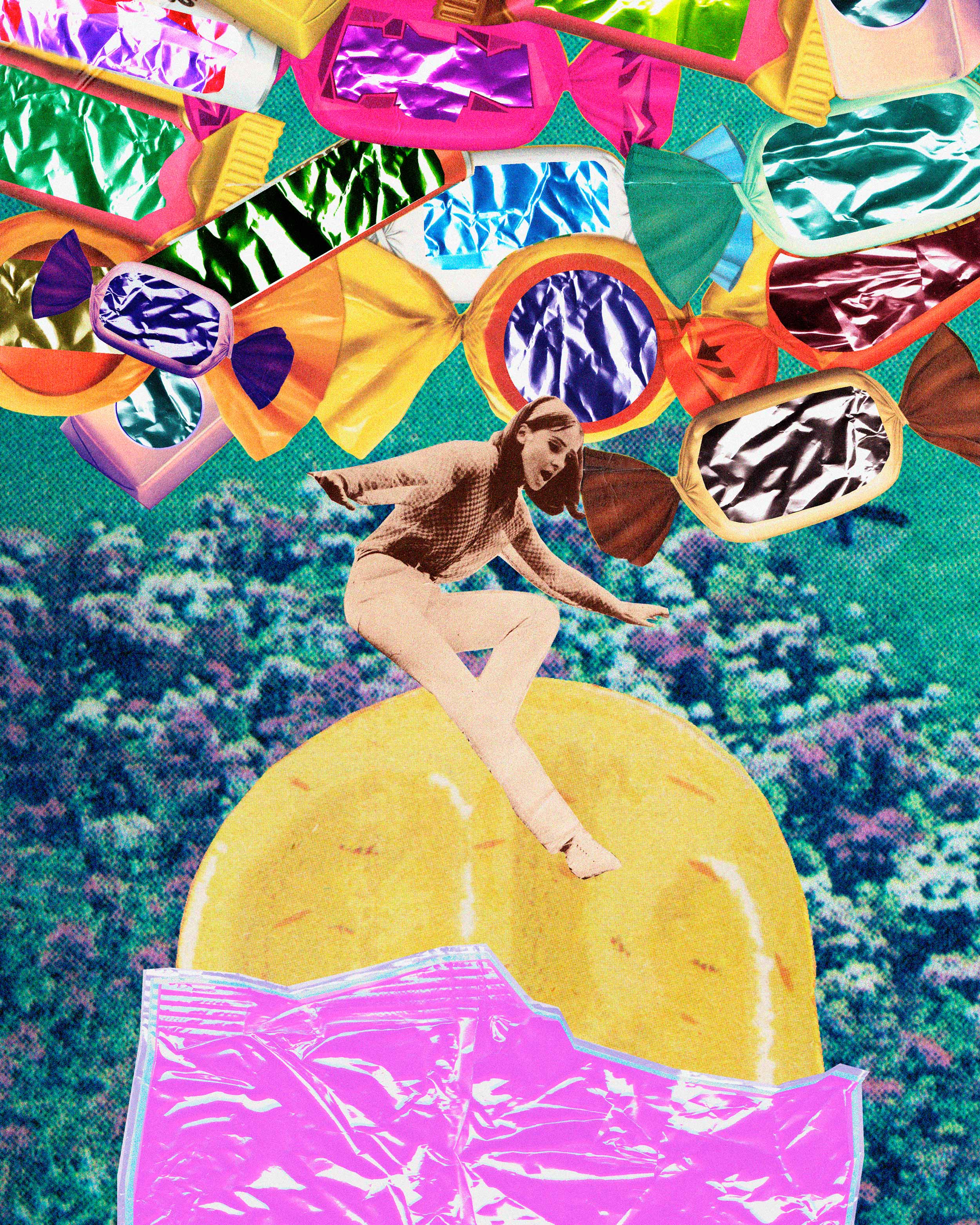 Digital Collage Artist:
Marcia Solis
Single-serve snacks evoke dreams of abundance and hygiene, and feelings of pleasure and disgust. What happens if we’re forced to face up to our destructive habit?
by
Nicole Grennan
5/26/2022

About 15 days after ending my five-year relationship, a friend invited me to Manhattan to look at resin rings in the first floor quasi-showroom of a cult jewelry brand. We thumbed through brightly coloured costume jewelry and then we shopped for magazines. I bought five. One was about the importance of friendship. “The truth is, none of us do it on our own. Transcendence requires human scaffolding; immortality, a benevolent witness: that fellow traveler holding a lantern in a dark wood, telling us like we are,” wrote Megan O’Grady.

The final stop we made was an Asian grocery store in the Lower East Side, where we ogled at the acrylic Yuzu lemons and fat grapefruits rendered on water bottles, and the omelettes tucked into fluffy white bread, rolled over themselves like clean linen in a cabinet. One of us pointed at a plastic package containing a single, perfect cake, cream spiraling like a nautilus between tufts of green sponge. The cakes were charming in their directness — labeled simply “Matcha wheat” — and left nothing to the imagination through their clear plastic wrappers. We grabbed two, and then we returned to the car, the cakes haphazardly strewn in the centre console to be consumed on the way home.

We each ate our cake in small, luxurious bites, Phoebe Bridgers humming through the speakers as the city stretched out alongside us under a setting sun. I remember feeling good, delighted to have a slice of cake all to myself, and it occurred to me that I had not felt good for a very long time or, if I had, I hadn’t been cognizant of it. A bit of the cream stuck to each plastic cake wrapper and I had the childlike urge to lick it off.

Buying a single slice of cake wrapped in transparent plastic, so that the image of the cake’s perfection reveals itself on the cash-register conveyor belt or in the palm of my hand, is a distinct type of pleasure. Foremost, single-serve plastic-wrapped snacks indulge the ego, a decadence purchased by myself, for myself — and only myself. I consume them with my eyes before my mouth. This plastic is transparent. In leaving so little to the imagination, it can feel like a promise, the kind so idyllic, so steadfast, no human could ever keep.

I also know, intellectually, that single-serve, single-use plastics are Bad. Plastic is selfish. Plastic doesn’t decompose. This plastic will remain on the planet for much longer than I will. Possibly, it will remain forever. It might end up in the ocean, where it will become incomprehensibly small. These small particles form garbage patches in the ocean, speckled with bottle caps and wrappers that will never rot. They might be consumed by marine animals and enter the food chain, where we will consume it until, eventually, inevitably, it consumes us. Plastic is worse than resilient. It is stubborn. It is immortal. It is immoral. Plastic is a nasty, disgusting habit. Using it as frivolously as possible, in the form of single-serve snacks, makes my consumption that much more gross and entitled.

It’s worth noting that, while I have never existed in a world without a crippling dependence on plastic, society’s impulse towards single-serve snacks in general is relatively new, and it isn’t unique to me. This apparently tempting form of consumption only took off in 1926, when Laura Scudder introduced using sealed wax paper bags to package potato chips.

Importantly and logically, the increase in plastic has always coincided with increased industrialization; both imply efficiency, saving time through streamlining and machinizing. In 1929, the Great Depression began in the United States, demonstrating the fragility and vulnerability of our food systems at the time. The 1940s trended towards convenience, as plastic packaging increased alongside the proliferation of corner stores. The mass hunger experienced during the depression informed the Green Revolution of the 50s and 60s, a period of research and technological innovations that transformed agriculture, for better or worse, with the intention of solving hunger worldwide.

In 1970, plastic surpassed wax as the preferred mode of packaging. According to the World Economic Forum, plastic use has increased by 20 times in the past 50 years alone. This increase in plastic has caused some experts to refer to our present as The Fourth Industrial Revolution. The evolution of plastic alongside more efficient food production helped cultivate a fantasy of infinite growth. For a moment, we were positioned to imagine that we could keep making more food and more plastic in endless amounts, to feed a population that seemed to endlessly grow. We didn’t have to or want to think about whether this growth was sustainable or even desirable. This may be why, even though so many of us know that plastic has a negative impact on the planet, we are having a really hard time letting it go.

Abundance is a powerful dream, particularly given the ways the threat of hunger has shaped human history, and so the way plastic appears to enable abundance feeds the pleasure of it all. Mass traumas like the Great Depression reconstitute our precarity, contextualizing our lives through scarcity and stories of times before when people went without. Not to mention that, for as long as humans have eaten, humans have been made sick by food, sometimes fatally.

Most plastic food packaging we encounter reduces spoilage and food waste, and single-use plastics continue to be touted as a sanitary way to reduce foodborne illness. The Covid-19 pandemic only strengthened the association of plastic with hygiene, as invisible germs lurked everywhere and the Starbucks baristas gently shook their heads, rejecting our reusable cups. Single-use plastic — vacuum-sealed, impenetrable — quells our fear of contamination. This may be why, in the car, we could just toss the cakes in the centre console. We didn’t have to care what they touched, because they were protected, insulated in their clear, impenetrable packaging. Harm is kept perfectly, permanently, out. Its insularity exists in full view.

Any relationship grounded in scarcity and suspicion of contagion is bound to be fraught; food consumption is no exception. Therefore, our impulse towards individually wrapped snacks — contained in a material that circumvents decay by design — reads like a response to generational trauma. After years of collective trauma from hunger and sickness, we have engineered a medium of consumption that forecloses these fears, passed down from generation to generation for the entirety of human history. But, survival shaping or not, plastic’s consequences warrant critical analysis: how would the pleasure of my cake purchases be affected if I was forced to reckon with the consequences; if I was forced to keep the plastic in my home, to look at it everyday, empty, smeared with cream that probably will never grow mold, on my windowsill?

The wheat cake in my palm might then be transformed into something disgusting, the way anything threatens to if it sits still, unchanged, for too long. Plastic exists in distinct opposition to nature, where change is the only constant. Trees spawn leaves, worms forge tunnels through dirt, an apple rots when we toss it out the window, returning to the earth. Plastic refuses change; even when we tear or crumple it, plastic is always plastic. Maybe that also explains why we’re so attached to it, like an anchor in an existence where impermanence feels like a threat instead of just another part of being alive. Some relationships just aren’t meant to last forever.

But even those relationships that don’t last forever have something to teach us. In the passenger seat of my best friend’s car, where I’m holding the unopened matcha wheat cake in my palm, I’m living in a fantasy. The cake’s shape and the shiny stubborn plastic encasing it allow me to live in a fantasy where nothing fades, nothing ends; time just goes on and on in a perfect spiral. But I have to rip open the bag to get the cake, of course. I might split it with a friend or save half for the self I’ll be tomorrow, which might be different from the one I am today. But my single-serve cake will be the same.

It will be scary to reimagine a world without plastic, to prioritize degrowth and change in spite of the centuries of hunger and sickness underpinning the development of plastic. The dreams plastic indulges — insularity, individuality, permanence — are dreams we attach to out of fear. But plastic isn’t secure, not really. It isn’t a true resolution. It’s dislodging everything from the ozone layer to the depths of the sea. Transforming our relationship to plastic and single-serve snacks demands a recognition that fear is primarily driving our economic and affective investment in it.

Can we be porous? Can we be imperfect and also exposed? Can we follow the lantern in the dark, trust that there is a way through? Through collectively transcending our attachment to single-serving food wrapped in plastic, and to fear; to our impulse towards certainty and linearity, we can taste freedom. Through ripping open the phantom of a promise we can be free.