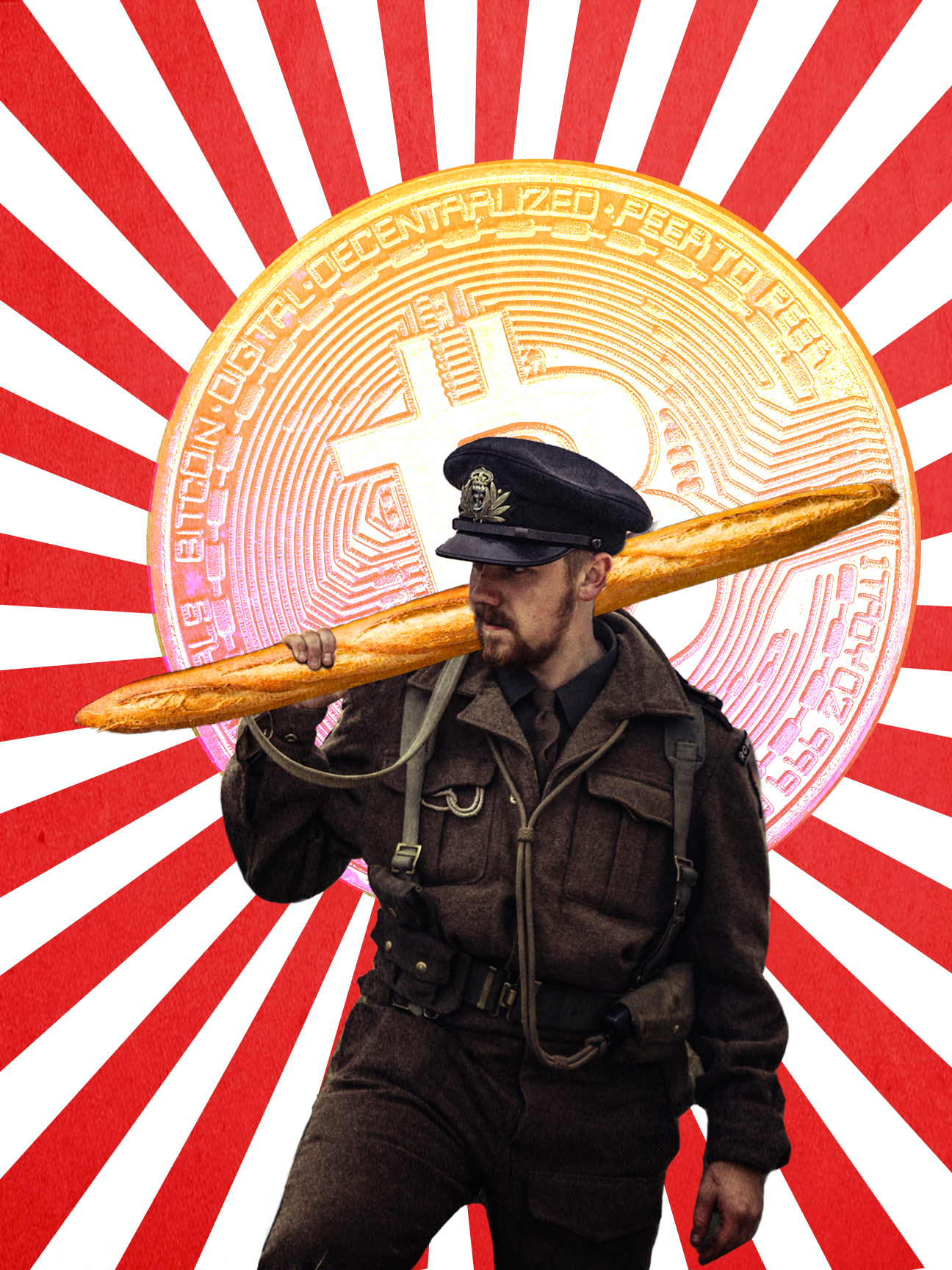 Digital Collage Artist:
Habeeba reda
Refugees can now pay for their groceries with food vouchers guaranteed by cryptocurrency — but the extent to which the disruptive technology can revolutionize food aid remains to be seen
by
Sharlene Gandhi
4/14/2022

Displaced people often leave their homes in conflict zones with the bare minimum they need to survive. That means that their access to banks and money is limited, cutting off their ability to buy essential goods. But the UN’s World Food Programme has been working with technology that enables refugees to make these purchases without the need for money.

Building Blocks is a blockchain-based technology that uses an iris scanner to read a person’s biometric data. It connects to their WFP vouchers, which enables them to purchase groceries. This programme — which was piloted in Pakistan in 2017 and has since been extended to refugee camps in Jordan and Bangladesh — supports more than one million people every month, processing 14 million transactions every day. According to the World Food Programme, this is the most widespread use of blockchain in the field of humanitarian assistance to date.

To understand how blockchain works, think of it as a chain of individual ‘blocks’. Each of these blocks stores a specific piece of data, and is linked to the blocks immediately before and after it in the chain by a unique passcode. If the data in the block is tampered with or edited, the passcode changes, thereby ‘breaking’ the chain. So, the data can’t be tampered with, without everybody who has access to the blockchain witnessing any changes. The outcome is a fully transparent, accurate record of transactions.

In the context of Building Blocks — and humanitarian aid more widely — blockchain technology allows refugees to have access to food without relying on cash payments or central banking systems at all. Transactions use Ethereum, a popular cryptocurrency, which is converted into vouchers for those buying food. Each family receiving aid can be uniquely identified using biometric data rather than a state-mandated piece of ID, and the blockchain maintains a record of their transactions. It means that while they are in the process of rebuilding their lives, they can still access essential goods and services. And the many dispersed aid organizations that are providing those goods and services can, in theory, distribute them quickly, and more evenly.

Blockchain is already pretty prevalent in the food industry. For instance, IBM’s Food Trust blockchain allows food producers, manufacturers, distributors and retailers to share data on the whereabouts and supply patterns of certain foods. Provenance uses blockchain to provide customers with traceable information on the environmental sustainability of a number of products, including food brands.

Blockchain is also the base technology for building cryptocurrencies — as is the case with Building Blocks and Ethereum. In conflict zones, where local currencies are often extremely unstable, cryptocurrencies can allow people to continue buying essential goods and services and exercising financial freedom, independent of governmental and regulatory decisions. In Afghanistan, people are converting their wealth into Bitcoin to retain some of its economic value. A Reddit user in Yemen claimed to be using cryptocurrencies to provide 22 families with flour, rice, oil and beans. Google searches for some of the most well-known cryptocurrencies, such as Bitcoin, Ethereum and Dogecoin, have increased in Libya, Syria and Palestine.

Beyond the WFP’s Building Blocks initiative, which began more than four years ago, few projects in the humanitarian aid space use blockchain. And for good reason, too. Blockchain software development is a pretty niche skill, albeit one that is increasingly in demand. Unsurprisingly, that also makes blockchain an expensive endeavour, and something that might be a hard sell when it comes to funding for humanitarian aid projects.

The blockchain itself also often has to intersect with other technologies and data sets to make it useful in the first place. For instance: Building Blocks wouldn’t be able to function without reliable data from the organizations that provide various levels of aid. Similarly, the blockchains used to track food supply chains often also rely on sensors and trackers that can interact with each other. All of this adds to the cost and technical feasibility of blockchain-based projects, and the time this takes to iron out usually isn’t in line with the short, urgent time spans to which aid organizations have to work. There is also an open question about privacy, especially when it comes to gathering the sensitive personal information of refugees and asylum-seekers: how can organizations guarantee that consumer data are securely stored, and doesn’t present another risk for those seeking aid?

Beyond the technology itself, there are a handful of structural and environmental issues that hinder the widespread adoption of blockchain and other tech-based solutions — and those issues are all the more exacerbated in the food aid space. Reliable internet connectivity is one, particularly when electricity access in a conflict zone is patchy at best. If any of these large-scale systems are state-controlled on any level, those using blockchain-based technologies could end up at the state’s whim — which undercuts the benefits of decentralization that blockchain offers.

Roselyn Wanjiru is the Director of Growth and User Acquisitions at Pesabase, a fintech platform that aims to increase financial connectivity in Africa. Writing on the issues with cryptocurrency adoption on the continent, she says: “The longer it takes this information to get to the general public, especially the younger generation, the less likely they will be to aspire to this in the first place.”

In other words, there is a knowledge and digital literacy gap that needs to be addressed if blockchain-based solutions can be rolled out at scale. It’s vital that that understanding can spread not only to those receiving aid, but also to local organizations on the ground who are working in local languages. With English generally being the lingua franca in the tech space, the sector ends up gatekeeping these potentially life-changing technologies until they are more readily accessible. Building Blocks is a good example of how to make blockchain an accessible piece of technology for those working in and receiving aid: it almost whirs on invisibly in the background. Aid organizations just need to be able to access the data that it generates, and beneficiaries interact with it through something that is very easy to use: an eye scanner, or a WFP food voucher.

Implementing blockchain-based solutions has the capacity to transform food aid distribution. It can not only ensure that aid is distributed promptly where it is needed most, but also — with the right datasets and analytical tools — can predict where aid is going to be needed most in the near future. This would enable food producers, distributors and retailers to work in tandem to meet that need. But so far, the way blockchain has entered the food space hasn’t quite lived up to that utopian promise.

According to an article in The Conversation, co-authored by a group of academics specializing in geography and environmental sustainability, “the implementation of blockchains must be decentralized to include small farmers and rural people. This will enable sustainable and equitable food systems and allow consumers to make informed decisions.” Sayuri Moodlar adds to this in her Medium article: “While food assistance programmes do invaluable work, we need to find long-term solutions to provide sustainable food security. For this to happen, innovative disruption is required in agriculture and food supply chains.”

Both of these arguments suggest how blockchain’s development and use in conflict zones can evolve to serve those in need. If programmes like Building Blocks can improve access to food for refugees and internally displaced people, can they also go one step further to include vulnerable food producers, farmers and pickers in the conversation? Blockchain programs can further address questions of food security in conflict zones by incorporating farmers and local producers. Doing so would further reduce the precarity in which refugees and internally displaced people live, while strengthening local networks against the shocks of war and in their ability to continue providing food for communities. Technology is only as good as the system it serves: if there isn’t enough food for refugees and internally displaced people, there is little that blockchain can do to resolve that if food producers aren’t meaningfully involved in the discussion.

Blockchain is still a relatively new piece of technology, one which has the potential to bring more transparency to the food aid space. Given who holds the keys to technology and technical knowledge — on the whole, Western aid organizations — it’s worth questioning why more projects like Building Blocks haven’t emerged since 2017. Blockchain and other internet-enabled technologies are ultimately dependent on the infrastructure that a country has, whether that is a strong and reliable broadband connection, or consistent supplies of electricity. So while blockchain does offer up an exciting alternative way of distributing food aid, humanitarian organizations also need to be wary of not putting all of their eggs into this basket — especially when working in unpredictable, highly volatile conflict zones.