ISSUE
10
-
As groundwater disappears in Zimbabwe, anxiety rises among the country’s farmers 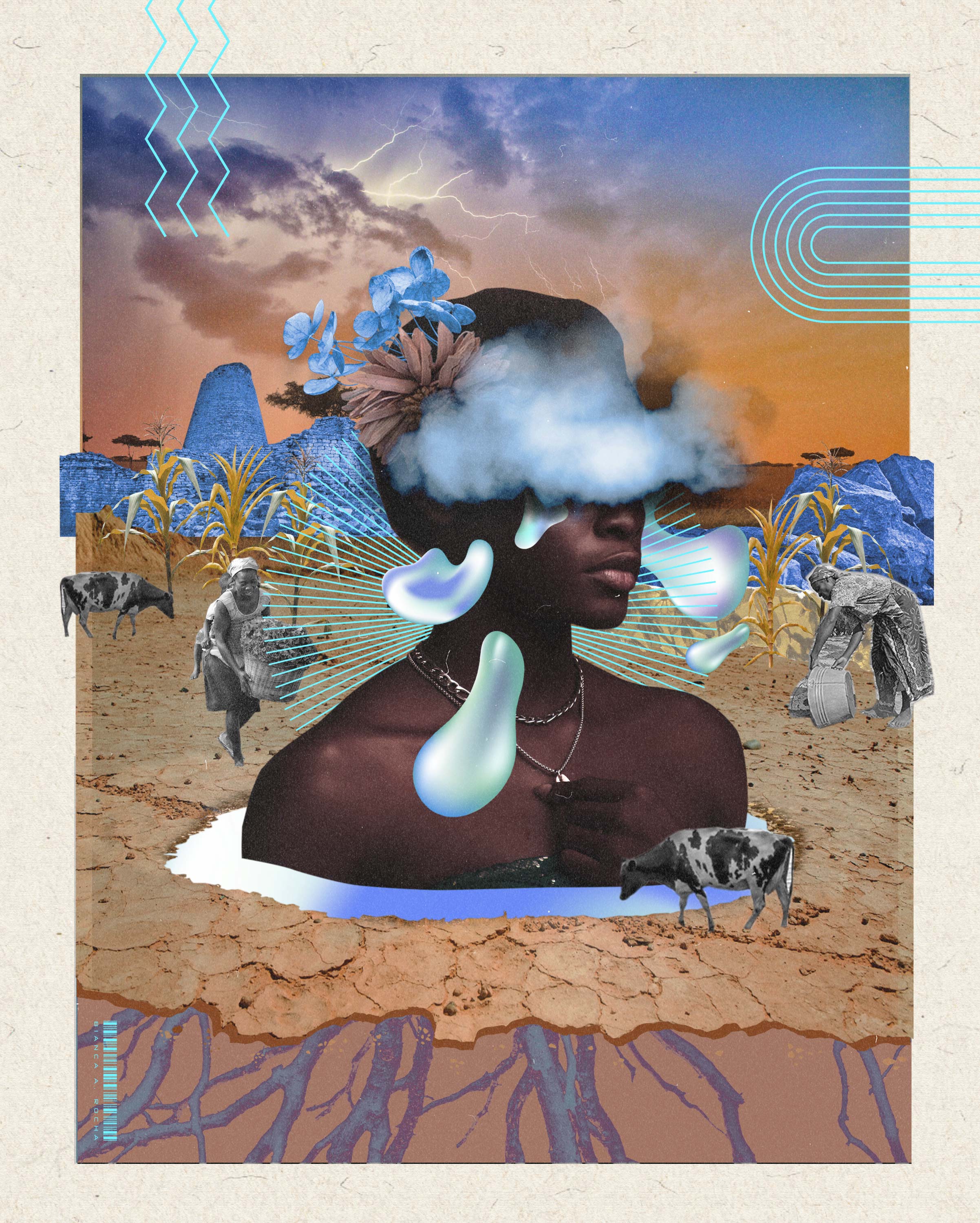 Digital Collage Artist:
The second drought in two years leaves farmers worrying about the present and the future
by
Andrew Mambondiyani
7/7/2022

Zimbabwe is parched. Another severe drought has hit the southern African country during the 2021/2022 farming season barely two years after a similar drought, leaving farmers anxious and worried.

Across the country, more than 70% of the population survives on agriculture or related rural economic activities, mostly rainfed farming.

Regular droughts over the past three decades have wrecked Zimbabwe, and they are becoming increasingly severe amid reports that the country’s temperatures have risen by 1C over the past 40 years. Annual rainfall during that time has decreased by 20 to 30%.

In 2022, most of the crops — particularly the national staple, maize — were wiped out by scorching temperatures in January and February, leaving millions of people experiencing food insecurity. And at the height of the 2018-2020 drought, more than seven million people did not have enough food.

Although Zimbabwe’s vice-president Constantino Chiwenga admitted that the current 2021/2022 farming season had been affected by drought, he assured thousands of people who had gathered for a rally in the eastern border city of Mutare in March this year that “no one will die of hunger”.

With much shorter rainy seasons and rainfall becoming much less predictable, rainfed agriculture is looking increasingly unsustainable. And as the climate crisis makes droughts more frequent and severe, groundwater in many parts of Zimbabwe is disappearing fast, which is also affecting irrigation farming. During the previous droughts, most rivers, wetlands, dams and boreholes dried up, forcing thousands of farmers to crowd for water at the few wells which still had water.

“This year we lost most of our crops due to the drought. We don’t have enough food to take us through to the end of the year,” said Alford Chadambuka, a smallscale farmer in Gutaurare area.

Studies have shown that the climate emergency poses a serious threat to water availability, and this is being borne out in Zimbabwe. Experts in the country say groundwater levels are depleting, as annual rainfall is no longer sufficient to replenish aquifers. As a result, farmers are finding it harder to rely on water for crops, livestock and domestic uses, and groundwater levels are replenishing much more slowly, if at all.

As droughts ravage the country, farmers are worried about the future.

“This year we lost most of our crops due to the drought. We don’t have enough food to take us through to the end of the year,” said Alford Chadambuka, a smallscale farmer in Gutaurare area, a small farming community about 50km south of the city of Mutare in Manicaland province.

Chadambuka said he was now planning for the winter cropping season but he was not sure if his borehole would be able to supply enough water to irrigate the crops.

“The borehole water has been affected by the drought and the water might not be enough to irrigate my whole crops of wheat and tomatoes,” Chadambuka said.

Chadambuka said many farmers in his area lost most of their crops as a result of the drought. During winter, most of the farmers in this part of the country grow vegetables and use water from the boreholes to irrigate the crops, but this is no longer possible as the groundwater is disappearing.

“The food situation here will be dire in the next few months and many farmers need food assistance,” he said.

Phillip Chirege, another smallscale farmer in Zimunya area, a few kilometres outside the city of Mutare, said the future of farming does not look good, as both underground and rain water stores are no longer reliable.

"We used to dig wells not so deep and get a lot of water but now we are digging down to more than 50m without getting water. Worse still, our wetlands have also dried up," Chirege said.

Chirege said many people in the area depended entirely on farming and had no other livelihoods or sources of income.

"Due to groundwater decline, combined with climate change, which is increasing temperatures and [has] reduced rainfall, these farmers will experience livelihood shocks."

"Without water there is no farming and without farming there's not life here. Yes, we might get food from NGOs or government in times of droughts but that's not what we want. We want to grow our own food and sell the surplus," he said.

And David Chikodzi, a Zimbabwean underground water expert and professor at the Great Zimbabwe University, said most farmers in Zimbabwe’s Manicaland province were subsistence or semi-commercial farmers, and relied on groundwater to support their livelihoods, sanitation and nutrition.

"Due to groundwater decline, combined with climate change, which is increasing temperatures and [has] reduced rainfall, these farmers will experience livelihood shocks,” said Chikodzi, who explained that groundwater has provided a safety net to rainfed agriculture when drought hits and the land dries out.

Chikodzi explains that where you find groundwater is determined by geological and climatic factors, as well as the way land is used. In most parts of Manicaland province in the country’s east, he said, it was difficult to find too much groundwater, as there is lots of crystalline basement rock in the area. Weathered and fractured over time, this kind of rock became permeable after it was originally compacted and formed in the area.

"Groundwater in the area is very sensitive to climatic patterns, especially precipitation, which is the main source of recharge. Most rainfall stations in the province show a lot of variability from season to season, with the trend showing declining patterns [of rainfall] over time," he said.

In short, climate change was causing groundwater levels in some parts of Manicaland to decline, according to Chikodzi, by causing rainfall levels to drop sharply and reducing the ability of groundwater stocks to recharge naturally.

"However, the decline can be looked at as a feedback loop of climate change, land degradation due to vegetation clearance, veld [wild] fires, poor farming practices and overexploitation," he said.

Chikodzi, however, said that approaching the issues systemically, taking the entire ecosystem into account, is required for addressing groundwater decline.

He added that there was a need to improve land resource planning, minimize veld fires, minimize deforestation, preserve wetlands and to coordinate on the use of groundwater.

"There is [a] need for mechanisms for increasing groundwater recharge because water that would previously recharge aquifers is now being lost to runoff because of reduced plant cover," he said.

Chikodzi said the best ways of addressing the issue had been successfully carried out in other parts of the country, such as the Songore and Gutu wetland rehabilitation in Murehwa area.

"They managed to increase groundwater recharge in the area by constructing artificial recharge pits called fanya juu [a Swahili name] at strategic contour ridges, to give time for flowing water to recharge groundwater," he said

He added that farmers should also drill deeper boreholes that were well situated to maximize the groundwater yields.

"Boreholes and deep wells need to be pump tested to ascertain its yield so that farmers are aware of the maximum land that can be irrigated by the resource without depleting it," he said.

However, the government of Zimbabwe has embarked on a national program to drill deeper boreholes in most rural areas, but the water is mostly for domestic uses and not agriculture.

The country's water minister, Anxious Masuka, told a symposium on sustainable water management in eastern and southern Africa this past October that every school and village would have a borehole each by 2024.

However, it remains to be seen whether the Zimbabwean government will manage to fulfil this ambitious pledge.