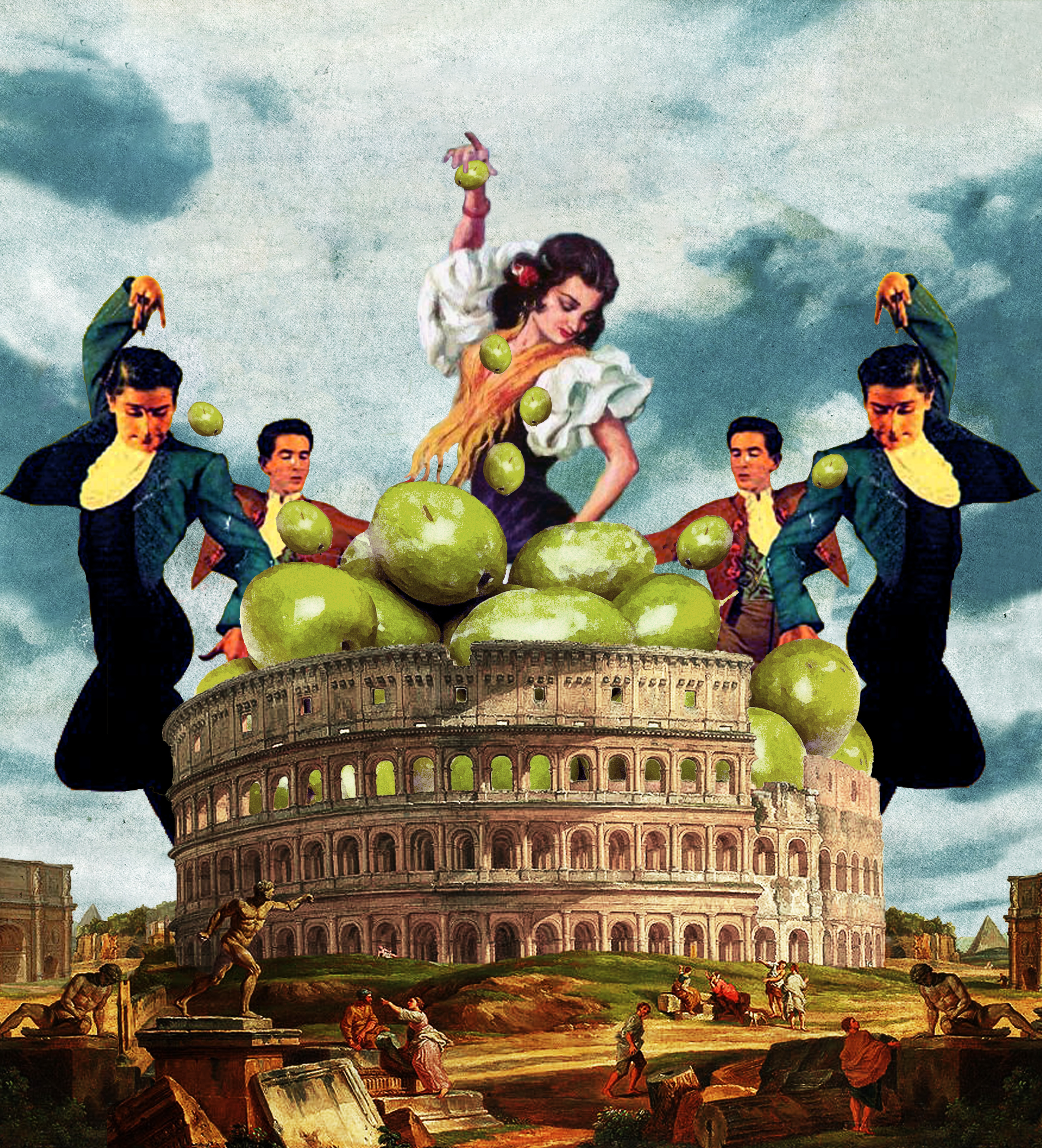 Digital Collage Artist:
Nick Pensa
Through the entrepreneurial spirit of Italian migrants, pizza and pasta have spread across the globe as tasty and easy to imitate. Yet, the foundation for much of Italy’s food culture lies in Spain, where the Roman emperors encouraged the growth of a key crop—the olive.
by
Aina de Lapparent Álvarez
10/5/2021

Food is a subtle and complex form of communication. In one bite, you can communicate ideas, values, identities, and attitudes. Cuisines have been essential parts of peace deals. Today, countries use food to promote cultures, build their brand, and attract tourists, a process which is led not just by the state, but corporations, celebrity chefs, social media, and also migrants. Needless to say Italy has had tremendous success in promoting itself through food.

To start, there’s a lot to work with. Food and wine critic and journalist Marco Oreggia explains “every region, every province, every commune, even every district in certain places, tells its own gastronomical story, has its own recipe, or its variation of the recipe of the territory.”

In Italy, food is culture.

Italy’s cuisines are even included on UNESCO’s Intangible Cultural Heritage list, which recognizes local cultures with global resonance. Through the entrepreneurial spirit of Italian migrants, pizza and pasta have spread across the globe as tasty and easy to imitate. Yet, the foundation for much of Italy’s food culture lies in Spain, where the Roman emperors encouraged the growth of a key crop—the olive.

Unlike the other seven natural hills that surround Rome, Mount Testaccio is a man-made mountain. It is composed of amphorae—large ancient storage jars with a pointed top. For centuries, visitors and inhabitants wondered how it came to be. Was it the local potters’ trash? The remains of a forgotten fire? A cemetery? The location, near the port of ancient Rome, held a clue, but it wasn’t until the 19th century that the mystery was solved.

During a storm, a young archeologist stumbled upon the answer he had been seeking. Suddenly, inscriptions appeared on the amphorae he had been looking at, as the slaked lime used by the Romans to cover up the bad odor of stale oil and bacteria dispersed. “Betica”, what we know today as southern Spain, read the inscriptions.

The archeologist noticed that there were different stamps, which meant the amphorae had arrived at different times. The creation of Mount Testaccio began in around 27 a.C.-14 d.C. period. There was a plan and a team charged with supervising. Think of Testaccio as a pyramid—materials were not piled from one end to another but from the centre to the outside. Today, Mount Testaccio is a fascinating resource for understanding ancient economies.

The 25 million amphorae were filled with just one product—olive oil—and 85 percent of it came from this one province, Betica. What they contained provided half the olive oil consumed and used by Rome’s population of approximately one million people for 200 years.

Olive oil production has evolved a lot in 2000 years. If we were to enjoy toasted bread with a pinch of salt and the olive oil produced back then, it would inevitably be more coarse than today’s equivalent.

But, some things haven’t changed in the past two millennia, such as Spain’s ongoing supply to the Italian market. To this day, Italians consume more oil than they can produce. In today’s globalized world, they even export much more, some of which is derived from Spanish olives and “bottled” in Italy.

When olive oil production intensified in the 19th and 20th centuries, farmers in southern Spain focused on quantity. From 1860 to 1935, the amount of olive oil produced annually in Spain tripled, increasing exports from 10,000 tons per year to 80,000 tons per year. Export demand for southern Spanish olive oil was for industrial use—where quality matters less—and the local market didn’t have very high standards. For Italian producers, the focus was already on culinary use, as pizza and pasta slowly became global favourites.

As General Franco’s dictatorship ended in the late seventies after forty years, there was a strong will to modernize amongst Spain’s olive oil producers. The Spanish industry consisted of farmers growing small-to-medium sized crops, whose plantations were old and aging. The regime had isolated Spain from the rest of the world, and language barriers for producers made exporting very challenging. They focused first on the domestic market.

Upon joining the European Union in 1986, Spain surpassed Italian production in volume, benefiting from increases in investment. Most Italian olive-producing farms and processing plants are small and situated in disadvantaged hilly areas, which makes introducing productivity-enhancing innovations particularly difficult. Only those farmers selling their products directly maintain their margins; those who sell through supermarkets and grocery stores are finding it harder and harder to remain profitable.

The modernizing Spanish industry replaced its highly spaced plantation methods in favour of intensive agriculture. Global demand increased by 50 percent during the 1990s, driven largely by countries outside of the Mediterranean. Olive oil production grew from 1453 million tons a year in the early nineties to a peak of 3.1 million tons in the early 2000s.

In order to maintain the industry’s growth, Spain shifted its strategy towards national consumption and exporting to international competitors, namely the Italian producers that are marketing Spanish olive oil as theirs. Spanish olive oil was going to become as good as it was affordable.

But now there are roadblocks ahead. While the Spanish olive oil industry has adapted faster to the global market and continues to challenge small Italian producers, it might not be sustainable.

Food and wine critic and journalist Marco Oreggia says the highly intensive agricultural model requires much more water per tree in regions that are often affected by droughts.

“In some regions there is awareness of this picture and a trend reversal is already underway, with forward-looking dynamic companies that are focusing on qualitative and environmental factors.”

Today, Spanish olive oil—similar to the days of Ancient Rome, when it was transported in the amphorae which built Mount Testaccio—constitutes half the olive oil sold in Italy. But while the Roman Empire is no more, cultural pride remains, especially in the elements they see as quintessential to their culture. Italians want their olive oil to be Italian.

This confidence is very clear among producers. Small-and-medium sized farmers in Italy continue to follow a 17th-century tradition of using their personal contacts to export their goods, making the most of their limited financial means. They export mostly to the United States and Canada, where a large Italian diaspora makes up a large part of its market—although the market’s demographic is expanding. Today, Italy imports for national consumption and exports its own production. Some U.S. companies exploit Italy’s reputation by giving Spanish olive oil an Italian name, such as the Pompeya brand.

Dr Luis Rallo, a professor from Cordoba’s university, says, “Spain has always exported virgin olive oil in bulk to Italy at prices slightly higher than those of the areas of origin in Spain. This has allowed Italian exporters to blend it with Italian virgin oils and export them as Extra Virgin Olive Oil with different designations of origin, some regional like Mediterranean Origin.”

Consumers need to embrace the fact that their olive oil relies upon cross-cultural collaboration, and that the mingling of cultures enriches our food and our lives. Applying borders to food can serve national interests in the short term, but ultimately, prosperity is to be found in collaboration. Despite differences, the Mediterranean region is a continuum of cultures, bound together by olives from thousands of years ago—possibly before the very ideas of ‘Spanish’ and ‘Italian’ existed—separated only by each country’s expertise and market access.

There are subtleties to appreciate in any olive oil that has been patiently curated, no matter its origin.